All articles from this author
Kazuyuki Sato


All articles from this author
Yurika Kunugi


All articles from this author
Satsuki Tokonishi


All articles from this author
Hideki Minami


All articles from this author
Akira Ando

An effective synthesis for syn-β-lactams was achieved using a Rh-catalyzed reductive Mannich-type reaction. A rhodium–hydride complex (Rh–H) derived from diethylzinc (Et2Zn) and a Rh catalyst was used for the 1,4-reduction of an α,β-unsaturated ester to give a Reformatsky-type reagent, which in turn, reacted with an imine to give the syn-β-lactam. Additionally, the reaction was applied to the synthesis of (±)-ezetimibe, a potent β-lactamic cholesterol absorption inhibitor.

The Mannich reaction is an important and classical C–C bond-forming reaction between an enolizable carbonyl compound and an imine to give the corresponding β-aminocarbonyl compound. For example, Shibasaki and his colleague reported the asymmetric Mannich reaction using a Lewis acid catalyst [1]. (L)-Proline is known as an excellent promoter for the Mannich reaction [2-6], and besides this, the reaction of the silyl enol ether derivatives with imines was used as an effective method [7-9]. In this situation, a wide variety of Mannich-type reactions have been reported to give β-amino esters and/or β-lactams by using metal enolates [10-17].

First of all, we tried to solve the drawbacks of the previously reported method and found that changing the catalyst to [RhCl(cod)]2 greatly improved the reaction. The results from the reaction of the [RhCl(cod)]2 catalyst with various α,β-unsaturated esters are summarized in Table 1. Most of the synthesized β-lactams were obtained with dramatically improved yields, although the β,β-disubstituted α,β-unsaturated ester did not give the product owing to the bulkiness of the β-position (Table 1, entries 1–8). It is interesting that ethyl sorbate (2g) gave the corresponding anti-β-lactam 3Ag in a moderate yield but with an anti-β-lactam stereochemistry indicating that the reaction proceeded via 1,6-reduction, then the resulting nucleophile was trapped by the imine at the α-position (Table 1, entry 9). By using [RhCl(cod)]2, the α,β-unsaturated lactone was also converted to the product with a small improvement in the yield (Table 1, entry 11). Acrylamide 2i also gave the corresponding β-aminoamide 4Ai in a low yield (Table 1, entry 12).

In the reaction using α,β-unsaturated lactone 2h, the β-lactam anti-3Ah that has a hydroxy group on the side chain was obtained in a low yield (Table 1, entry 11). This result was of interest because the reaction is applicable to the synthesis of ezetimibe. Ezetimibe is an inhibitor of the cholesterol transporter Niemann–Pick C1 Like 1 Protein (NPC1L1), and is used as a strong cholesterol absorption inhibitor that reduces plasma low-density lipoprotein fraction (LDL-C) [28-30]. Recent studies on the function of NPC1L1 suggest that NPC1L1 may be involved with the internal uptake of the hepatitis C virus (HCV) and absorption of vitamin K [31,32]. Although it has a simple mono β-lactamic structure and appears easy to synthesize, there are relatively few reports for the synthesis of ezetimibe because of its three asymmetric centers [33-35].

Based on these results, we applied this reaction to the synthesis of ezetimibe (Scheme 3). The reaction of imine 1B with lactone 2j proceeded smoothly and gave the desired β-lactam product, anti-3Bj, in 58% yield. Fortunately, since 2j was stable compared to 2h under the reaction conditions, the yield of β-lactam anti-3Bj was somewhat improved. After deprotection using Pd/C and H2 the target product, (±)-ezetimibe was obtained in 80% yield and its overall yield was 46%.

In some of our previous publications [22,23,36], we proposed a reaction mechanism as shown in Figure 1. In the initial step, the Rh catalyst reacted with Et2Zn to give a rhodium–hydride complex 6 via the elimination of ethylene from the rhodium–ethyl complex 5. The formation of rhodium enolate 7 involved the 1,4-reduction of α,β-unsaturated ester 2 by 6 and the transmetalation with a zinc species to give the Reformatsky-type reagent Int A. This intermediate Int A reacts immediately with the imine to give the corresponding intermediate Int B. Subsequently, intramolecular cyclization of Int B gave the desired β-lactam 3. On the other hand, the possibility of alternative mechanism could not be denied which concerned with the formation of ketene from Int A to give the β-lactam, directly. However, we thought that the reaction proceeded through the above mechanism, because our previous results using similar conditions did not give the corresponding products such as β-propiolactones. It is well known that the substituents on the α- or β-position of α,β-unsaturated carbonyl compounds affect the yields and stereoselectivities [37]. A rhodium–hydride complex derived from [RhCl(cod)]2 seems to be suitable for the reactivity and selectivity in comparison with the corresponding rhodium–hydride complex from RhCl(PPh3)3 which has bulkier ligand.

The addition of a Lewis acid contributed not only to the activation the of imine but also the anti stereoselectivity of this reaction (Scheme 4). Furthermore, we reported in the previous paper that the configuration of the Int A species was identified as that of the E-enolate by the trapping procedure of tert-butyl acrylate (2k) with TMS-Cl. In addition, the same reaction gave only the syn-β-amino ester syn-4Ak in 86% and it was speculated that the reaction was proceeding via a linear transition state (Figure 2) [23].

When the reaction proceeded via a linear transition state, the reaction would be proposed to involve six competing transition state models (model A–F) as shown in Scheme 5. All these have steric repulsion but only the model B could be expected to have the interaction between the lone pair of the imine and the enolate metal. It seems the model B would be more stable than others to give the syn product. On the other hand, the addition of Lewis acid to the reaction mixture gave the iminium salt immediately and it would obstruct the stabilized metal interaction in model B’ of Scheme 6. This is meaning that the model F’ would be the most stable model, and the formation of the anti form product might increase relatively.

In conclusion, we found improved conditions for reductive Mannich-type reaction using [RhCl(cod)]2 with Et2Zn, and the reaction proceeded smoothly to give various syn-β-lactams even if β-substituted α,β-unsaturated esters were employed as the substrates. In addition, we could also provide some perspectives on the reaction mechanism and the stereochemistry. When the reaction was carried out with imines and α,β-unsaturated lactones, similar β-lactams with anti-selectivities were obtained. Furthermore the yield and anti selectivity could be increased by adding Lewis acid, and we succeeded in achieving the effective synthesis of (±)-ezetimibe by using this reaction.

Tetrahydrofuran (THF) was purchased from Kanto Chemical Co. Inc. (Tokyo, Japan) in the dehydrated form. N,N-Dimethylformamide (DMF) and dichloromethane (CH2Cl2) were distilled over CaH2 and phosphorus pentoxide directly before use, respectively. All imines were prepared from corresponding aldehydes and amines. Methyl acrylate was distilled directly before use. Other commercially available reagents were used without further purification. All experiments were carried out under an argon atmosphere in flame-dried glassware using standard inert techniques for introducing reagents and solvents unless otherwise noted.

General procedure for the syn selective synthesis of azetidin-2-one

In a manner closely related to a procedure in reference [23]: Imine (1) and α,β-unsaturated ester (2, 2 equiv) were added to a solution of 2 mol % of [RhCl(cod)]2 in DMF at 0 °C. Then, 1.0 M Et2Zn in hexane (3 equiv) was gradually added to the mixture at room temperature, and the mixture was stirred for 24 h. The mixture was quenched with sat. NH4Cl and extracted with AcOEt. The AcOEt layer was washed with sat. NaCl and dried over MgSO4. The solvent was removed in vacuo, and the residue was purified by column chromatography to give the corresponding syn-azetidin-2-one. The stereochemistry of the products were determined by the NOE between the CH3 and C6H5 groups on the azetidin-2-one ring and the coupling constant between each proton of C3 and C4 (syn form: J = 5.0–6.0 Hz, anti form: J = 2.0–3.0 Hz).

© 2016 Isoda et al.; licensee Beilstein-Institut.
This is an Open Access article under the terms of the Creative Commons Attribution License (http://creativecommons.org/licenses/by/2.0), which permits unrestricted use, distribution, and reproduction in any medium, provided the original work is properly cited.
The license is subject to the Beilstein Journal of Organic Chemistry terms and conditions: (http://www.beilstein-journals.org/bjoc) 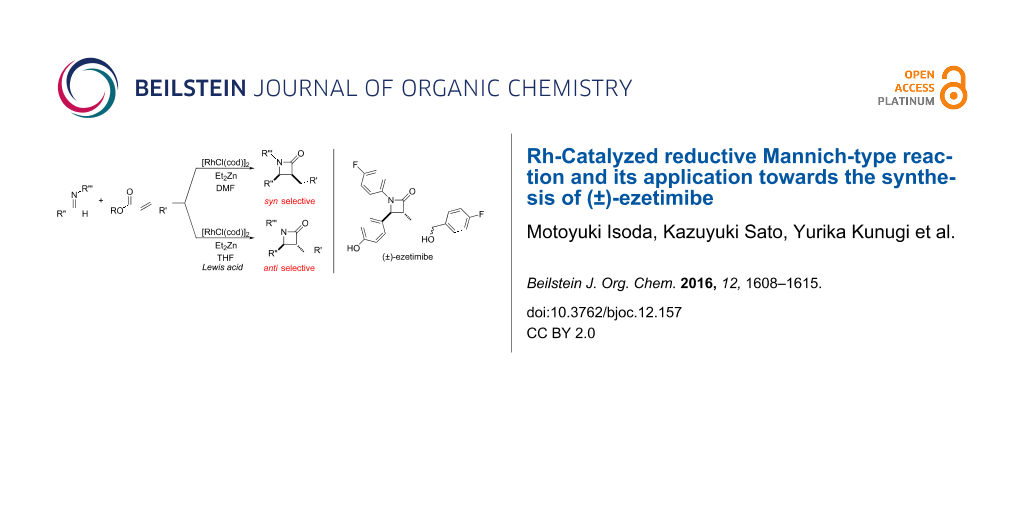