Here, we report a simple synthetic strategy to the bridgehead vicinal diallylation of norbornene derivatives. These substrates are useful to generate propellanes via ring-closing metathesis. Single-crystal X-ray diffraction analysis of four compounds led to the realization of configurational correction of earlier reported molecules.

The norbornene moiety is a useful template and also a versatile synthon in organic synthesis [1]. The double bond present in the norbornene frame is strained and therefore participates in cycloaddition sequences as a C2-synthon [2,3]. It was reported that the norbornene system is as strained as cyclopropane or cyclobutane (norbornene, 100 kJ/mol; cyclopropane, 115 kJ/mol; cyclobutane, 110 kJ/mol) [4,5]. Some of the annulated norbornene derivatives undergo retro Diels–Alder (rDA) reactions at ambient temperature in the presence of methylaluminium dichloride and a reactive dienophile [6-8]. Cage compounds with interesting applications have been assembled by a cyclization reaction starting with suitably functionalized norbornene derivatives [9-11]. Moreover, the norbornene unit induces a hairpin-like architecture when it is incorporated into a peptide chain. This property is useful to design norbornene-based ionophores [12]. Due to the strained nature of norbornene systems they are useful precursors for ring-rearrangement metathesis (RRM) [13-21] to generate intricate polycyclics involving non-traditional retrosynthetic routes. Recently, functionalization of unactivated aromatic C–H bonds was achieved by using palladium catalysts and norbornene (Catellani reaction) [22,23]. In view of these applications, the design and synthesis of vicinal diallylnorbornene derivatives is a worthwhile exercise. The double bond present in the allyl group can be further converted into various other useful functionalities for further synthetic manipulation by adopting the appropriate functional group transformations.

Our approach to various propellane derivatives is shown in Figure 1. The target propellane 1 could be assembled from diallyl compound 2 via ring-closing metathesis (RCM) [24-32]. Whereas, the diallyl derivative 2 can be derived from a readily available Diels–Alder (DA) adduct 3 through an allylation sequence.

Installation of two C–C bonds to generate quaternary centers in a stereocontrolled manner in a single step is not a trivial exercise. Generally, it was accomplished by radical three-component coupling reactions or Michael-type additions of organocopper reagents starting with conjugated carbonyl compounds [33,34]. But, the resulting alkyl groups are in trans orientation. Our journey to propellane 1 synthesis (Figure 1) was commenced with the preparation of known DA adducts 3a, 3b, 3aa' and 3bb' [35-37]. In this regard, DA adduct 3a was treated with allyl bromide in the presence of NaH to obtain the corresponding O-allylated compound (70%) and C-allylated compound 2a (28%) by using our earlier reported method [38]. Next, diallyl compound 2a on RCM using Grubbs first generation (G-I) catalyst in CH2Cl2 at room temperature (rt) gave the desired propellane derivative 1a (61%) along with a minor amount of quinone derivative 4 (17%) (Scheme 1). The formation of quinone 4 can be explained on the basis that compound 2a underwent rDA and RCM in one-pot. Here, the compound 2a didn’t undergo RRM because a metallacyclobutane cannot be formed between the allyl and norbornene double bonds due to structural constraint [39] and moreover, we didn’t observe any ring-opening metathesis (ROM) product during RCM reaction. This may be due to the fact that sparging with an inert gas (N2 or Ar) during RCM process helps to accelerate the loss of ethylene and thus, prevents ROM [39].

Garratt and Hollowood reported that bridgehead functionalization of norbornene derivatives such as endo-5-norbornene-2,3-dicarboximide 5 gave bridgehead alkylated compound 6 with retention of configuration (Scheme 2) [40]. Based on this report, we expected the allyl groups introduced via alkylation sequence will occupy the exo position (see 2ab) because the bridgehead hydrogens in DA adduct 3a are in exo configuration. Thus, in the final compound 1a the newly formed 6-membered ring during RCM is supposed to be in the exo configuration.

To our surprise, single-crystal X-ray analysis of 1a revealed that the 6-membered ring (C28–C30–C31–C32–C33–C27) formed via RCM is in endo configuration as depicted in Figure 2.

At this point, we turned our attention to understand the configurational origin of the allyl groups in 2a. To understand whether compound 2a was formed by Claisen rearrangement (CR) of the corresponding O-allyl compound or by carbanion mediated C-allylation of the DA adduct 3a, we carried out the alkylation of compound 3a with n-propyl bromide in refluxing THF for 2 h. Here, di-O-propyl compound 7 was obtained in 36% yield along with a dehydrogenated compound 8 (20%, Scheme 3). Surprisingly, no C-alkylation product was observed from 3a. This result suggests that the C-allyl compound 2a was formed from the corresponding O-allyl compound via CR.

When the other previously prepared diallyl compound 2aa' [38] was subjected to RCM using G-I catalyst under similar reaction conditions the propellane derivative 1aa' was obtained in 79% yield (Scheme 4).

To expand the scope of this strategy, cyclopropyl containing diallyl products 2b and 2bb' were also prepared along similar lines starting with the corresponding DA adducts 3b and 3bb' [41]. Initially, the diallyl compound 2b was reacted with G-I catalyst to afford the desired propellane 1b in 86% yield (Scheme 5). Its structure has been established on the basis of spectroscopic data (1H NMR, 13C NMR and DEPT-135) and was further supported by HRMS data.

In addition, the configuration of 1b and 2b were unambiguously determined via single-crystal X-ray diffraction analysis (Figure 4). Based on this data it is clear that the bridgehead allyl groups in the RCM precursor 2b are in endo configuration. Subsequent RCM of diallyl compound 2b gave the ring-closing product 1b with retention of the configuration.

Similarly, staring with substrate 2bb', another propellane derivative 1bb' was synthesized using the same catalyst (i.e., G-I) in CH2Cl2 at rt. Here, along with the desired propellane 1bb' (79%) a minor amount of quinone derivative 16 (13%) was also generated due to a one-pot RCM-rDA sequence of 2bb' which is similar to the substrate 2a (Scheme 6). Compound 1bb' was characterized based on the 1H and 13C NMR, DEPT-135 and further supported by HRMS data. However, spectroscopic data of quinone 16 were identical with the literature values [41].

This methodology was found to be useful to synthesize various propellane derivatives containing a norbornene moiety by employing RCM sequence. Moreover, we have firmly established the configuration of allyl groups at bridgehead position of norbornene derivatives by single-crystal X-ray diffraction analysis. A control experiment with propyl bromide provided an insight into the reaction mechanism that the bridgehead allylation proceeds through enolization, O-allylation followed by CR and not via carbanion chemistry. This alternative strategy is useful to introduce vicinal diallyl groups in a cis orientation to generate propellane derivatives, which is a different protocol from previously reported methods where the two vicinal alkyl groups are introduced in trans orientation. In this study, we have also revised the configuration of our earlier reported molecules containing allyl groups and oxa-bowl/propellane hybrids. Since non-flattened molecules are implicated in biological systems, our results would be useful in drug design [42].

We thank the Department of Science and Technology (DST), New Delhi for the financial support and also thank Darshan Mhatre for his help in collecting the X-ray data and structure refinement. S. K. thanks the Department of Science and Technology for the award of a J. C. Bose fellowship and Praj industries for Chair Professorship (Green Chemistry). R. G. thanks the University Grants Commission (UGC), New Delhi for the award of a research fellowship.

Continuous-flow retro-Diels–Alder reaction: an efficient method for the preparation of pyrimidinone derivatives

© 2016 Kotha and Gunta; licensee Beilstein-Institut.
This is an Open Access article under the terms of the Creative Commons Attribution License (http://creativecommons.org/licenses/by/4.0), which permits unrestricted use, distribution, and reproduction in any medium, provided the original work is properly cited.
The license is subject to the Beilstein Journal of Organic Chemistry terms and conditions: (http://www.beilstein-journals.org/bjoc) 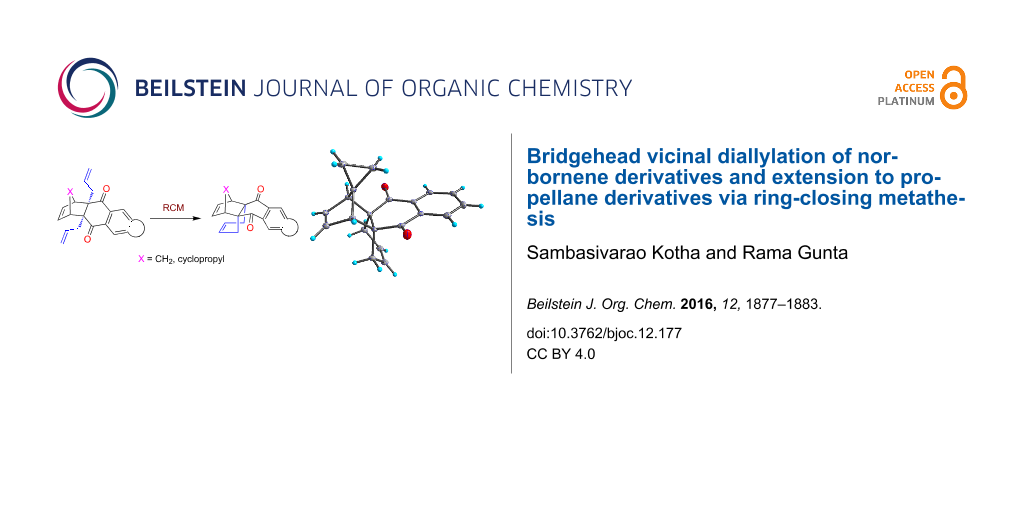