All articles from this author
Chiara Volpe


All articles from this author
Giorgio Della Sala


All articles from this author
Amedeo Capobianco


All articles from this author
Alessandra Lattanzi

An investigation on the stereoselective cascade sulfa-Michael/aldol reaction of nitroalkenes and commercially available 1,4-dithiane-2,5-diol to 3,4,5-substituted tetrahydrothiophenes, bearing a quaternary stereocenter, is presented. A secondary amine thiourea derived from (R,R)-1,2-diphenylethylamine was found to be the most effective catalyst when using trans-β-methyl-β-nitrostyrenes affording the heterocyclic products in good yields and moderate stereoselectivities.

The interest toward the development of stereoselective methodologies to prepare tetrahydrothiophenes bearing multiple chiral centers increased over the last years [1]. Indeed, chiral non-racemic functionalized tetrahydrothiophenes are endowed with different biological activities [2-5] and they are useful ligands in asymmetric catalysis [6]. However, few asymmetric approaches are available to obtain this class of compounds and only recently organocatalytic stereoselective cascade reactions have emerged as the most successful, and straightforward approach to access them [7,8]. Aminocatalytic [9-12] and non-covalent organocatalytic cascade sulfa-Michael/Michael [13-15] and sulfa-Michael/aldol reactions [16-20] enabled the synthesis of differently functionalized tetrahydrothiophenes bearing up to three contiguous chiral centers, including quaternary ones, with good to high control of the diastereo- and enantioselectivity.

Surprisingly, to date there has been one report on a dynamic system combining a 1,1,3,3-tetramethylguanidine (TMG)/ZnI2-catalyzed diastereoselective cascade sulfa-Michael/nitroaldol reaction followed by lipases catalyzed kinetic resolution using two representative trans-β-methyl-β-nitrostyrenes and 1,4-dithiane-2,5-diol as reagents [21]. One diastereoisomer of the racemic tetrahydrothiophenes, present at the equilibrium, was preferentially acylated by the enzyme to give the product in high ee.

Different amines such as Et3N, DBU, TMG catalyze the sulfa-Michael/nitroaldol process of either trans-β-methyl-β-nitrostyrenes [21] and trans-β-nitrostyrenes [22] with 1,4-dithiane-2,5-diol. Based on all above considerations and prompted by our interest in asymmetric synthesis of functionalized tetrahydrothiophenes [14], we wondered whether we could use bifunctional organocatalysts to develop a diastereo- and enantioselective cascade sulfa-Michael/nitroaldol reaction and herein we report our preliminary results.

According to the literature data, low control of the diastereoselectivity was observed in the cascade reaction of 1,4-dithiane-2,5-diol with trans-β-nitrostyrenes, and in the case of (E)-1-aryl-2-nitropropene all four diastereoisomeric tetrahydrothiophenes were observed when using tertiary amines such Et3N, DBU or TMG [21,22].

At the outset, the sulfa-Michael/nitroaldol reaction was studied by reacting trans-β-nitrostyrene, (E)-1-phenyl-2-nitropropene and (E)-1-phenyl-2-nitrobutene in toluene at room temperature with 1,4-dithiane-2,5-diol as precursor of mercaptoacetaldehyde, using 10 mol % loading of different bifunctional organocatalysts (Scheme 1, Table 1).

aIsolated yield of all diastereoisomers after silica gel chromatography. bDetermined by 1H NMR analysis of the crude mixture. cDetermined by chiral HPLC analysis. Negative values indicate the prevalent formation of the opposite enantiomer.

In the case of trans-β-nitrostyrene (1), a mixture of diastereoisomers 5 and 6 were rapidly formed, irrespective of the catalyst used, with a poor level of diastereo- and enantioselectivity (Table 1, entries 1–5). Thiourea catalyst VII afforded the best result, leading to products 5/6 in a ratio of 72/28 although with low ee values (Table 1, entry 6). Reacting trisubstituted olefin 2a with compound 4, led to three isomers with modest diastereocontrol when using catalysts (I–VII). Among the catalysts tested, compound VII proved to be the most active and enantioselective, giving the major diastereoisomer 7a with 44% ee (Table 1, entry 13). Taking into account that amine thiourea VII, bearing a sterically hindered secondary amine moiety, was significantly more effective than tertiary amine-based thioureas [14,23], catalyst VIII, bearing a sterically demanding neopentyl group, was synthesized in order to check its impact on the stereoselectivity (Scheme 2).

Catalyst VIII was easily obtained in a two-step procedure in fair overall yield. Compound VIII proved to be less active, affording a comparable level of diastereoselectivity than compound VII, but a lower ee value for major diastereoisomer 7a was measured (Table 1, entry 14). Moreover, the opposite enantiomer of product 7a was preferentially obtained, thus suggesting that the nature of the alkyl group on the secondary amine moiety greatly affects the stereochemical outcome of the process. The relative configuration of diastereoisomers 7a/8a/9a was established by NOESY and NOE analysis on diastereoisomerically pure 7a and on a diastereoisomeric mixture of compounds 8a and 9a (see the Supporting Information File 1) [24].

Finally, catalyst VII was checked in the reaction of alkene 3 under the same conditions (Table 1, entry 15). After a longer reaction time, diastereoisomers 10–12 were isolated with poor diastereomeric ratio and major isomer 11 was recoverd with 42% ee [25].

The diastereoselective ratios, determined for tetrahydrothiophenes deriving from alkenes 2a and 3, are in line with their computed thermodynamic stability in toluene (see the Supporting Information File 1). Indeed, products 8a and 9a were found to be 0.7 kcal/mol less stable compared to compound 7a. In the case of products 10–12, the predicted relative free energies for 10, 11 and 12 fall within a range of 0.1 kcal/mol.

Pleasingly, a solvent screening for the cascade reaction carried out on compound 2a with catalyst VII enabled to improve the diastereoselectivity as only 7a/8a were detected in 75:25 ratio and the enantiocontrol increased to 50% ee for diastereoisomer 7a when using chlorobenzene as the solvent at room temperature (Table 2, entry 5).

aIsolated yield of all diastereoisomers after silica gel chromatography. bDetermined by 1H NMR analysis of the crude mixture. cDetermined by chiral HPLC analysis.

It is worth noting that bifunctional organocatalyst VII appears to be more effective in terms of diastereocontrol than previously employed Brønsted base/Lewis acid system TMG/ZnI2 giving four diastereoisomers instead [21].

Finally, the sulfa-Michael/nitroaldol cascade reaction was applied to other trans-β-methyl-β-nitrostyrenes under the optimized conditions (Table 3).

aIsolated yield of all diastereoisomers after silica gel chromatography. bDetermined by 1H NMR analysis of the crude mixture. cDetermined by chiral HPLC analysis.

Tetrahydrothiophenes, bearing three contiguous stereocenters, were isolated in good to high yield, moderate diastereoselectivity and up to 59% ee.

In conclusion, we reported a diastereo- and enantioselective cascade sulfa-Michael/nitroaldol reaction of (E)-1-aryl-2-nitropropenes with 1,4-dithiane-2,5-diol. The process was catalyzed by an easily available amine thiourea to give 3,4,5-substituted tetrahydrothiophenes, bearing a quaternary stereocenter, in good yield and moderate enantiocontrol. It has been demonstrated that a simple bifunctional amine thiourea secures a more effective control of the diastereoselectivity than Brønsted base/Lewis acid systems. Data herein illustrated suggest that fine tuning of the bifunctional organocatalyst structure and reaction conditions will be required for further improvements of the challenging cascade process.

We thank the Italian Ministry of University and Research (MIUR) and University of Salerno for financial support.

© 2016 Meninno et al; licensee Beilstein-Institut.
This is an Open Access article under the terms of the Creative Commons Attribution License (http://creativecommons.org/licenses/by/2.0), which permits unrestricted use, distribution, and reproduction in any medium, provided the original work is properly cited.
The license is subject to the Beilstein Journal of Organic Chemistry terms and conditions: (http://www.beilstein-journals.org/bjoc) 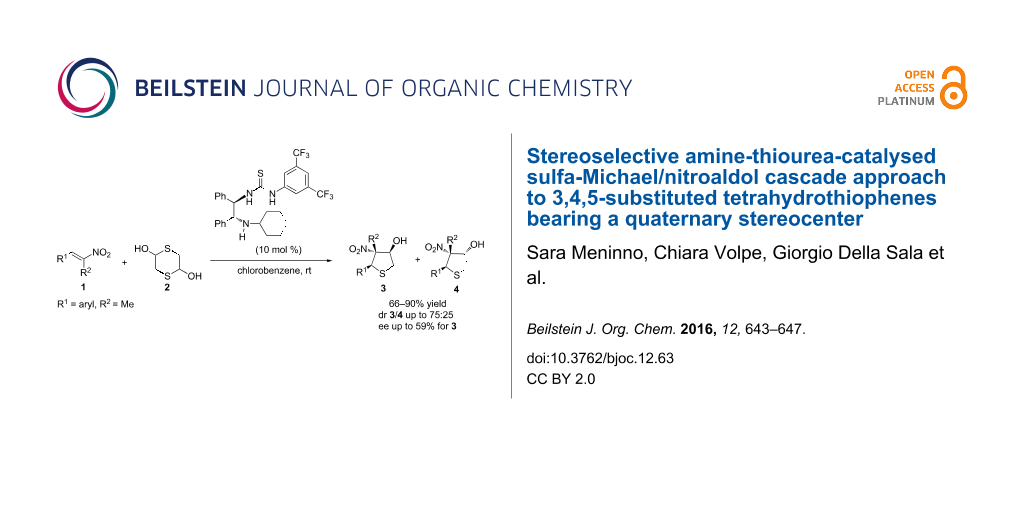