Syntheses of dibenzo[d,d']benzo[2,1-b:3,4-b']difuran derivatives and their application to organic field-effect transistors


All articles from this author
Koji Nakano

Ladder-type π-conjugated compounds containing a benzo[2,1-b:3,4-b']difuran skeleton, such as dibenzo[d,d']benzo[2,1-b:3,4-b']difuran (syn-DBBDF) and dinaphtho[2,3-d:2',3'-d']benzo[2,1-b:3,4-b']difuran (syn-DNBDF) were synthesized. Their photophysical and electrochemical properties were revealed by UV–vis absorption and photoluminescence spectroscopy and cyclic voltammetry. Organic field-effect transistors (OFETs) were fabricated with these compounds as organic semiconductors, and their semiconducting properties were evaluated. OFETs with syn-DBBDF and syn-DNBDF showed typical p-type characteristics with hole mobilities of <1.5 × 10−3 cm2·V−1·s−1 and <1.0 × 10−1 cm2·V−1·s−1, respectively.

Furan-containing π-conjugated compounds have attracted less attention until recently [17-27]. The oxygen atom possesses a smaller van der Waals radius than a sulfur atom. Accordingly, furan-containing π-conjugated compounds should be expected to form a denser packing structure in the solid state, which is one of the main requirements for high semiconducting properties [28-31]. In 2007, Nakamura and co-workers reported the synthesis of furan-fused ladder-type π-conjugated compounds, benzo[1,2-b:4,5-b']difurans (BDFs) 1 and their application to OLEDs as hole-transporting materials (Figure 1) [32]. They also synthesized a series of isomeric BDFs (benzo[1,2-b:5,4-b']difurans and benzo[1,2-b:6,5-b']difurans) and studied their structure–property relationship [33,34]. Furthermore, naphthodifurans with a fused-naphthalene between two furan rings have been developed as organic semiconductors for OFETs [19,20]. In particular, the naphtho[2,1-b:6,5-b']difuran derivative 2 has been reported to demonstrate an excellent OFET mobility of 3.6 cm2·V−1·s−1 [19]. Previously, we have reported the synthesis of dibenzo[d,d']benzo[1,2-b:4,5-b']difurans (anti-DBBDFs), which is also a π-extended homologue of BDF [35]. The OFET devices with an anti-DBBDF skeleton exhibited p-type semiconducting properties [36,37]. For example, dialkyl-substituted anti-DBBDF 3 showed a hole mobility of 0.042 cm2·V−1·s−1 [38]. Recently, we have also found that dinaphtho[2,3-d:2',3'-d']benzo[1,2-b:4,5-b']difuran (anti-DNBDF 4) with a more extended π-conjugation afforded higher hole mobility of 0.33 cm2·V−1·s−1 [39-41]. These studies clearly demonstrate that furan-fused π-conjugated compounds are promising candidates as organic semiconducting materials, and it is highly desirable to investigate the structure−property relationship thoroughly for further development of furan-containing semiconducting materials.

The synthetic routes to syn-DBBDF 5 and syn-DNBDF 6 are described in Scheme 1 and Scheme 2. 3-Decylanisole was first synthesized from commercially available 3-bromoanisole via iron-catalyzed cross-coupling reaction with decylmagnesium bromide in 71% yield [47]. Lithiation of the obtained 3-decylanisole with s-BuLi and the following treatment with 2-isopropoxy-4,4,5,5-tetramethyl-1,3,2-dioxaborolane (iPrO-Bpin) gave boronate ester 7 in 57% yield. Then, terphenyl 9 was synthesized via palladium-catalyzed Suzuki–Miyaura cross coupling of boronate ester 7 with 2,3-difluoro-1,4-diiodobenzene (96% yield) and subsequent demethylation (95% yield). Finally, the desired syn-DBBDF 5 was successfully synthesized via the double intramolecular cyclization under basic conditions at high temperature (92% yield) [37,43]. The same synthetic strategy was applied to the synthesis of syn-DNBDF (Scheme 2). 2-Decyl-7-methoxynaphthalene was prepared from 7-methoxynaphthalen-2-ol in two steps according to the literature [23,48], and used for the synthesis of boronate ester 10 (45% yield). The following cross coupling (80% yield), demethylation (85% yield), and the double cyclization (87% yield) gave the target syn-DNBDF 6. The obtained syn-DBBDF 5 is soluble in common organic solvents and can be purified by column chromatography. In contrast, because of low solubility in common organic solvents, the crude product of syn-DNBDF 6 was purified by washing several times with water and the subsequent sublimation.

To study the semiconducting properties of syn-DBBDF 5 and syn-DNBDF 6, bottom-gate/top-contact OTFTs were utilized as a device structure. Thin films of syn-DBBDF 5 and syn-DNBDF 6 were deposited by sublimation under high vacuum (p < 10−5 Pa) at a rate of ca. 1 Å·s−1 for syn-DBBDF and ca. 0.4 Å·s−1 for syn-DNBDF onto the Si/SiO2 substrates. The substrate temperature (Tsub) during deposition has been known to have a great impact on the OTFT performance by affecting the nucleation and growth of the organic molecules [52,53]. Accordingly, the thin films were fabricated at different substrate temperatures. In addition to the bare Si/SiO2 substrates, the HMDS (hexamethyldisilazane)-treated substrates were used to evaluate the effect of the substrate structure on the device performance. The gold source/drain electrodes were deposited on the thin films. The channel width and length were 500 μm and 50 μm, respectively.

Both syn-DBBDF- and syn-DNBDF-based OFETs demonstrated typical p-type semiconducting characteristics. The extracted FET parameters and the transfer/output characteristics are summarized in Table 2, Figure 5, and Figure S21 (Supporting Information File 1). The syn-DBBDF-based OFETs fabricated on bare Si/SiO2 substrates at Tsub = 30 °C showed a field-effect mobility μFET of 5.0 × 10−5 cm2·V−1·s−1 and an Ion/Ioff ratio of 101, while those with HMDS-treated substrates demonstrated higher mobility of 1.5 × 10−3 cm2·V−1·s−1 with an Ion/Ioff ratio of 103. The deposition of syn-DBBDF 5 at Tsub = 60 °C did not give a thin film, which should be caused by re-sublimation of syn-DBBDF 5 from the surface. The more π-extended syn-DNBDF 6 afforded higher performances than syn-DBBDF 5. OFETs fabricated on the bare and HMDS-treated Si/SiO2 substrates at Tsub = 30 °C showed a field-effect mobility of 2.3 × 10−2 cm2·V−1·s−1 (Ion/Ioff = 103) and 2.0 × 10−2 cm2·V−1·s−1 (Ion/Ioff = 103), respectively. The FET performance also depends on the substrate temperature during thin-film fabrication. Thus, the highest hole mobility of 1.0 × 10−1 cm2·V−1·s−1 was obtained for the syn-DNBDF-based device fabricated on the HMDS-treated substrate at Tsub = 90 °C, while it was lower than that fabricated with anti-DNBDF derivatives [39].

The vapor-deposited thin films of syn-DBBDF 5 and syn-DNBDF 6 were analyzed by X-ray diffraction (XRD) and atomic force microscopy (AFM). Figure 6 shows the out-of-plane XRD pattern and an AFM image of the thin film of syn-DNBDF 6 on the HMDS-treated Si/SiO2 substrate (Tsub = 90 °C), which demonstrated the highest mobility in this study. The layer structure was confirmed with a monolayer thickness (d-spacing) of 3.94 nm (2θ = 2.24°). Molecular lengths with extended linear alkyl chains are expected to be ca. 4.2 nm. Accordingly, syn-DNBDF 6 should be arranged on the substrate with its molecular long axis almost perpendicular to the substrate. Such a layer structure was also confirmed by AFM. As shown in Figure 6b,c, the thin film of syn-DNBDF 6 forms relatively large grains (ca. 0.5 μm in size) with a layer structure (step heights ca. 4.0 nm) along with heterogeneous protrusions. The molecular arrangement indicated by these observations is advantageous for the in-plane charge transfer of OFETs. Based on XRD patterns and AFM images, the substrate treatment and the substrate temperature seem to have a limited impact on the molecular arrangement (Figures S22 and S23, Supporting Information File 1). The similar layer structure was also confirmed for syn-DBBDF 5 (Figures S22 and S23, Supporting Information File 1).

In summary, we investigated the synthesis and properties of ladder-type π-conjugated compounds, dibenzo[d,d']benzo[2,1-b:3,4-b']difuran (syn-DBBDF 5) and dinaphtho[2,3-d:2',3'-d']benzo[2,1-b:3,4-b']difuran (syn-DNBDF 6). Based on the photophysical and electrochemical data, both compounds are expected to possess good air stability as organic semiconducting materials. The comparison with their anti-isomers revealed that the π-conjugation in syn-DBBDF 5 and syn-DNBDF 6 is less effective than those of their anti-isomers. OFETs based on these compounds were fabricated as bottom-gate top-contact devices, and their semiconducting properties were evaluated. All devices showed typical p-type transistor characteristics. The highest hole mobility of 1.0 × 10−1 cm2·V−1·s−1 was achieved when using syn-DNBDF-based OFET device.

This work was partially supported by MEXT KAKENHI Grant Number 26104510. A part of this work (XRD) was conducted in Nagoya University, supported by the Nanotechnology Platform Program (Molecule and Material Synthesis) of the Ministry of Education, Culture, Sports, Science and Technology (MEXT), Japan. We are grateful to Prof. Shusaku Nagano at Nagoya University for XRD analysis of thin films.

© 2016 Truong and Nakano; licensee Beilstein-Institut.
This is an Open Access article under the terms of the Creative Commons Attribution License (http://creativecommons.org/licenses/by/2.0), which permits unrestricted use, distribution, and reproduction in any medium, provided the original work is properly cited.
The license is subject to the Beilstein Journal of Organic Chemistry terms and conditions: (http://www.beilstein-journals.org/bjoc) 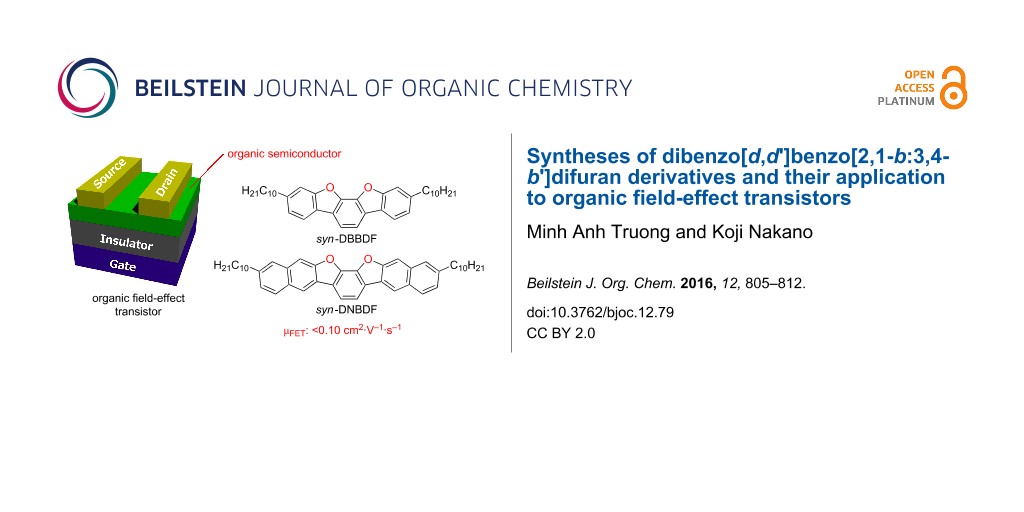