All articles from this author
Sae Yosugi


All articles from this author
Shinichiro Fuse


All articles from this author
Takashi Takahashi

This article is part of the Thematic Series "Automated chemical synthesis".

A solution-phase automated synthesis of the versatile synthetic intermediate, Garner’s aldehyde, was demonstrated. tert-Butoxycarbonyl (Boc) protection, acetal formation, and reduction of the ester to the corresponding aldehyde were performed utilizing our originally developed automated synthesizer, ChemKonzert. The developed procedure was also useful for the synthesis of Garner’s aldehyde analogues possessing fluorenylmethyloxycarbonyl (Fmoc) or benzyloxycarbonyl (Cbz) protection.

Automated synthesis has attracted a great deal of attention in recent years because the automation of synthetic operations improves both the reproducibility and reliability of syntheses [1-4]. Synthetic chemists frequently perform repetitive processes such as the optimization of reaction conditions, construction of compound libraries, and preparation of synthetic intermediates. These operations are very time-consuming, and do not require expert knowledge and skills. Development of automated synthetic procedures and storage of relevant digital data allow anyone to reproduce the same results anytime and anywhere using the same apparatus and reagents. As a result, synthetic chemists can spend more time on advanced and challenging problems. We previously reported automated syntheses of various bioactive compounds [5-8], including taxol, using our originally developed solution-phase automated synthesizer, ChemKonzert [9].

Protected α-amino aldehydes are versatile intermediates for the synthesis of vicinal amino alcohols and important building blocks for various bioactive natural products [10-12]. In particular, Garner’s aldehyde (4a) is very useful as a chiral building block [13-18]. It is sufficiently stable and its configurational rigidity allows stereoselective addition of nucleophiles to the aldehyde [19].

The most conventional synthesis of 4a involves the protection of the amine, the carboxylic acid, and the alcohol moiety of serine, and the subsequent reduction of carboxylic acid derivatives such as ester [20-27], thioester [28], or Weinreb amide [29,30] to the aldehyde. In addition, Burke and co-workers reported an asymmetric hydroformylation of 2,2-dimethyl-2,3-dihydrooxazole for the synthesis of 4a [31]. Although various syntheses of 4a have been established, an automated synthesis has never been demonstrated. The automated synthesis of a versatile intermediate such as 4a will improve the overall research efficiency of synthetic chemists. Herein, we report the first solution-phase automated synthesis of Garner’s aldehyde (4a) and its analogues.

Our synthetic route is shown in Scheme 1. We planned to synthesize 4a with various protecting groups from a commercially available amino ester through a three-step procedure utilizing the automated synthesizer, ChemKonzert (Figure 1).

Figure 1 shows the automated synthesizer ChemKonzert and its various components. An automated synthesis of 4a was examined utilizing ChemKonzert (Scheme 1). It is important to examine and check the reaction conditions manually before performing the automated synthesis. Therefore, we optimized the reaction time and the work-up method was modified. We started with the Boc protection of methyl L-serinate hydrochloride (1). The computer controlling the automated synthesizer was programmed with a specific procedure. The substrate, reagents, solvents, and wash solutions were added to the reaction vessel (RF1), reagent reservoir (RR1), solvent bottles (RS1–3), and wash solution bottles (RS4–6), respectively. A solution of methyl L-serinate hydrochloride in THF was stirred at 25 °C in RF1, to which a solution of triethylamine in THF and Boc2O in THF was added. Originally, the respective solutions were loaded in the reagent reservoirs (RR1 and RR3). After stirring at 25 °C for 5 h, the reaction mixture was diluted with ethyl acetate from RS1 and was quenched by adding 1 M HCl from RR2. The reaction mixture was then transferred to the centrifugal separator (SF). After centrifugation, the two resulting phases were separated; their electroconductivities measured with a sensor and transferred to two receivers (SF1 and SF2). The aqueous phase in SF1 was returned to RF1. Ethyl acetate, from RS1, was added, and the mixture was stirred for 3 min and then transferred to SF. After performing the extraction, the combined organic mixture in the receiver (SF2) was washed with 10% aqueous NaCl solution from RS3. The organic layer was separated in SF, transferred to SF2, subsequently passed through a plug of anhydrous Na2SO4 (DT1) and collected in a round-bottom flask (CF1). The collected solution was manually concentrated in vacuo. The obtained residue was purified manually using silica gel column chromatography. Carbamate 2a was obtained in 82% yield.

DIBAL reduction was also achieved using ChemKonzert. The amount of Rochelle salt required to diminish the aluminum salt generated from DIBAL was optimized in manual operation preliminarily. A solution of the substrate in toluene was stirred at −80 °C in the reaction vessel (RF1). A solution of DIBAL in toluene, originally loaded into the reagent reservoir (RR1), was added to RF1. After further stirring at −80 °C for 4 h, the reaction was quenched by adding saturated aqueous Rochelle salt solution at 25 °C from the solvent bottle RS2. The subsequent automated aqueous work-up, manual concentration, and silica gel column chromatography afforded 4a in 71% yield. The observed yields of the automated syntheses were similar to those obtained from the corresponding reported manual syntheses (see Scheme 1).

The Garner’s aldehydes containing an Fmoc or Cbz protecting group (PG) could be synthesized from the corresponding methyl ester; however, lower yields were obtained for the DIBAL reduction, probably due to the DIBAL-mediated removal of the carbamates [32].

We thank Mr. Kazuhiro Machida for assistance with the maintenance of ChemKonzert. We also thank Mr. Yoichiro Hirose for fruitful discussions.

Clustering and curation of electropherograms: an efficient method for analyzing large cohorts of capillary electrophoresis glycomic profiles for bioprocessing operations

© 2017 Masui et al.; licensee Beilstein-Institut.
This is an Open Access article under the terms of the Creative Commons Attribution License (http://creativecommons.org/licenses/by/4.0), which permits unrestricted use, distribution, and reproduction in any medium, provided the original work is properly cited.
The license is subject to the Beilstein Journal of Organic Chemistry terms and conditions: (http://www.beilstein-journals.org/bjoc) 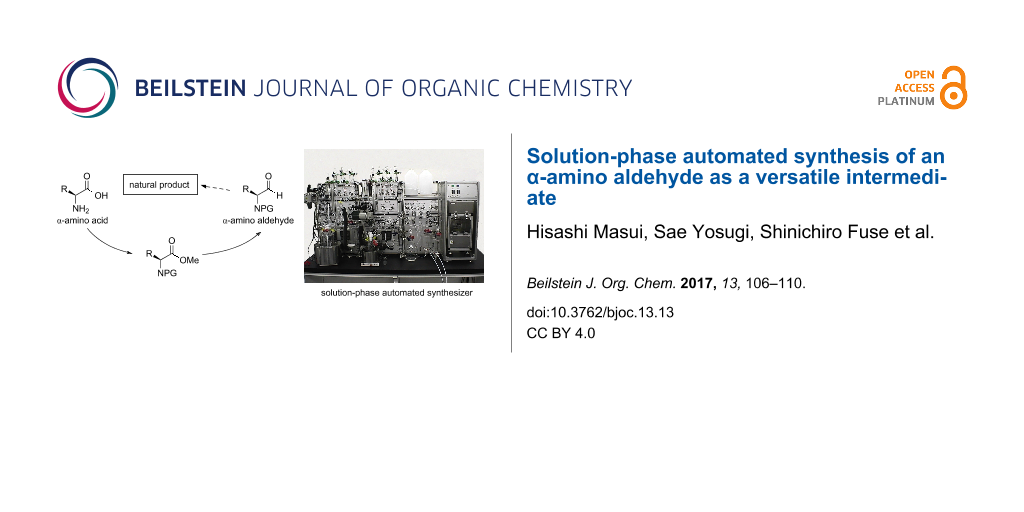