All articles from this author
Jan Rinkel


All articles from this author
Patrick Rabe


All articles from this author
Arman Beyraghdar Kashkooli


All articles from this author
Harro J. Bouwmeester

Terpene synthases convert a handful of simple linear and achiral oligoprenyl diphosphates in just one enzymatic step into a remarkable diversity of usually polycyclic structurally complex lipophilic terpenes with multiple stereogenic centres. In their active sites type I terpene synthases contain the highly conserved aspartate-rich motif DDXX(X)(D,E) and the NSE triad NDXXSXX(R,K)(E,D), modified to a DTE triad in plants, for binding of the Mg2+ cofactor that forms a trinuclear (Mg2+)3 cluster to which the diphosphate portion of the substrate binds. Upon substrate binding the active site closes, resulting in hydrogen bonds between the substrate’s diphosphate and the pyrophosphate sensor, a highly conserved arginine located 43 amino acids upstream of the NSE triad, and the RY dimer, a highly conserved motif at the C-terminus. The substrate is ionised by extrusion of diphosphate, yielding a highly reactive allyl cation that can react in a cyclisation cascade by attack of olefinic double bonds to the cationic centre, hydride shifts and Wagner–Meerwein rearrangements. The process is usually terminated by deprotonation or attack of water to yield a lipophilic terpene hydrocarbon or alcohol. Among the first investigated terpene synthases were the (+)- and (−)-bornyl diphosphate synthases from the plants Salvia officinalis and Tanacetum vulgare forming a more polar product by the unusual termination via reattack of diphosphate [1], the trichodiene synthase from the fungus Trichothecium roseum [2], and pentalenene synthase from Streptomyces exfoliatus [3]. Recently, the first terpene synthases were reported from a eukaryotic soil microorganism, the social amoeba Dictyostelium discoideum [4,5]. With respect to bacterial enzymes, many terpene synthases have been identified and their products have been structurally characterised (reviewed in [6], following reports: [7-14]). One possible method to investigate the products of terpene synthases is the expression of terpene synthase genes in a heterologous host, as was recently performed for a large number of bacterial enzymes in an engineered Streptomyces avermitilis strain from which the biosynthesis genes for all other natural products were deleted, allowing a relatively easy purification of the terpene synthase products from culture extracts [15,16]. The heterologous expression of terpene synthase genes in Escherichia coli is also frequently successful, resulting in the production of volatile terpenes by this bacterium that can be detected in headspace extracts [17,18]. In one of these previous reports [17] we have described a terpene synthase from Chitinophaga pinensis DSM 2588 (accession number WP_012789469) as a sesquiterpene synthase for germacrene A (1), which was based on the identification of this compound and its Cope rearrangement product β-elemene (2) formed by the thermal impact during GC–MS analysis [19] in E. coli headspace extracts under heterologous expression of the terpene synthase gene (Scheme 1). Here we present the diterpene synthase activity of this enzyme in in vitro experiments and the first heterologous expression of a bacterial terpene synthase gene in a plant, Nicotiana benthamiana.

Characterisation of a diterpene synthase from Chitinophaga pinensis in vitro

The terpene synthase from C. pinensis was heterologously expressed in E. coli as a recombinant protein with a C-terminal polyhistidine tag using a previously reported pET28c-based expression construct [17] and purified by Ni-NTA affinity chromatography (Figure S1, Supporting Information File 1). The purified enzyme was tested in in vitro experiments for mono-, sesqui- and diterpene activity by incubation with geranyl (GPP), farnesyl (FPP) and geranylgeranyl diphosphate (GGPP) as substrates, which yielded a single product 3 only from GGPP, but no products from FPP and GPP as demonstrated by GC–MS analysis (Figure 1). The mass spectrum of 3 showed a molecular ion at m/z = 290 pointing to a diterpene alcohol and a base peak ion at m/z = 59 indicative of a 2-hydroxyisopropyl group that frequently occurs in terpene alcohols. Both findings, i.e., no production of sesquiterpenes from FPP in in vitro experiments with recombinant purified enzyme as well as the emission of sesquiterpenes by E. coli during heterologous expression, were fully reproducible (Figure S2, Supporting Information File 1).

The compound 3 obtained from the in vitro incubation of GGPP was purified and its structure was elucidated by extensive one- and two-dimensional NMR spectroscopic methods (Table 1, Figures S3–S9, Supporting Information File 1). The 13C NMR spectrum showed five signals for methyl groups, seven aliphatic CH2 groups, two aliphatic and two olefinic CH groups, and four signals for quarternary carbons including one connected to oxygen and two olefinic carbons, suggesting the structure of a bicyclic diterpene alcohol. The 1H,1H-COSY spectrum revealed three contiguous spin systems for C2–C3, C5–C6–C7, and C9–C10–C11–C12–C13–C14 (Scheme 2). Key HMBC correlations from H19 and H20 to C12 and C18 placed the 2-hydroxyisopropyl group at C12, while HMBC correlations from H17 to C6, C7, C8 and C9 located the C8–C17 fragment between C7 and C9. HMBC crosspeaks between H16 and C3, C4 and C5 indicated the C3–C4–C5 connection, and HMBC correlations between H15 and C1, C2 and C14, and between H11, C1 and C2 established the bonds between the quarternary carbon C1 and its four neighbours. Diagnostic NOESY correlations between H11 and H2β, H3 and H7, between H12 and H2β, and between H10α and H15 established the relative configuration of 3, resulting in the structure of (1R*,3E,7E,11S*,12S*)-18-hydroxydolabella-3,7-diene and identifying the terpene synthase from C. pinensis as 18-hydroxydolabella-3,7-diene synthase (HdS).

For the incubation experiments with (R)- and (S)-(1-13C,1-2H)GPP, the terpene monomer IPP, HdS and the GGPP synthase (GGPPS) from S. cyaneofuscatus [12] were added to the reaction mixtures for an enzymatic elongation of the GPP isotopomers to the corresponding GGPPs. It is well established that the elongations of oligoprenyl diphosphates with IPP by type I oligoprenyl diphosphate synthases proceeds with inversion of configuration at C1 [23,24]. The conversion of the obtained labelled GGPPs by HdS gave a stereospecific incorporation of the deuterium labelling into H10α from (R)-(1-13C,1-2H)GPP and into H10β from (S)-(1-13C,1-2H)GPP (Figure 3), which pointed to the same absolute configuration for 3 as deduced from the experiments with the two enantiomers of (1-13C,1-2H)GGPP.

Similar incubation experiments were performed with (R)- and (S)-(1-13C,1-2H)FPP, IPP, GGPPS and HdS, resulting in the stereospecific incorporation of deuterium labelling into the hydrogens at C6 of 3 (Figure 4). These experiments could not be used to confirm the absolute configuration of the diterpene, because the signals for H6α and H6β could not be unambiguously assigned from the NMR spectra of the unlabelled compound. Instead, the results from these incubation experiments were used for this assignment.

HdS exhibited a defined stereochemical course with respect to the methyl groups in the hydroxyisopropyl group of 3, as was indicated by conversion of (12-13C)FPP and (13-13C)FPP [25] with IPP by GGPPS and HdS that resulted in the specific incorporation of labelling into the carbon atoms absorbing at 30.8 ppm and 30.7 ppm, respectively (Figure 5).

To test the catalytic activity of HdS in planta, its corresponding gene was transiently expressed in N. benthamiana. Since we have shown before that the mitochondria are a suitable subcellular compartment for the heterologous production of terpenes [26], and it is known that one of the multiple GGPP synthases in plants are targeted to the mitochondria [27], we decided to attempt the expression of HdS with mitochondrial targeting (HdS-mit). A construct without targeting signal (HdS; resulting in cytoplasmic localisation) and an empty vector were used as controls. A p19 construct [28] was co-infiltrated in all treatments to suppress endogenous silencing of N. benthamiana upon agroinfiltration. No difference was found by GC–MS in EtOAc extracts of N. benthamiana leaves expressing an empty vector or HdS, while the chromatogram of an extract obtained from HdS-mit expressing leaves revealed an additional major compound (Figure 6). This compound (retention time of 21.08 min) was identified as 18-hydroxydolabella-3,7-diene by GC–MS, using the diterpene alcohol obtained by the in vitro incubations of GGPP with HdS as an authentic standard. A preparative scale isolation of 3 from plant leaves expressing HdS-mit yielded 26.2 mg of the pure diterpene alcohol from 100 g of fresh leaves (0.03% of fresh leaf weight). The obtained material was identical to 3 obtained by in vitro incubation of GGPP with recombinant HdS by 1H and 13C NMR spectroscopy.

A compound with the same structure as determined from our experiments for (1R,3E,7E,11S,12S)-18-hydroxydolabella-3,7-diene (3), but with different NMR data, was recently reported from the brown alga Dilophus spiralis [29]. In this study, a revision for the previously reported structure of (1S,3E,7E,11R,12S)-18-hydroxydolabella-3,7-diene (1,11-di-epi-3) for a compound isolated from the brown alga Dictyota dichotoma [30] was suggested (Scheme 2C). The same natural product is known from the higher plant Aglaia odorata [31], but in this case the reason for the assignment of the reported absolute configuration is unclear, because no optical rotation has been included in this study. It is difficult to judge what the correct structure for the compounds isolated from the brown algae and from A. odorata is, but the NMR data and isotopic labelling experiments presented here clearly point to the structure of 3 for the material obtained by us from the diterpene synthase from C. pinensis.

In this study we have reinvestigated a terpene synthase from Chitinophaga pinensis that was previously characterised as germacrene A synthase by heterologous expression in E. coli. While this result could be reproduced during the course of the present study, the recombinant purified enzyme surprisingly only showed diterpene synthase activity (it did not produce any product from GPP nor FPP) and the obtained product was identified as (1R,3E,7E,11S,12S)-18-hydroxydolabella-3,7-diene. Notably, heterologous expression in the plant Nicotiana benthamiana and targeting to the mitochondria resulted in the production of the same diterpene alcohol. Although the mitochondria of N. benthamiana also produce FPP [32], again no germacrene D was detected. Taken together, these experiments demonstrate that the expression of one and the same terpene synthase in different organisms may lead to the formation of different products and even an altered substrate specificity. Indeed, it has been shown before that small alterations in the conditions such as a change of the metal cofactor can result in a switch from FPP to GPP synthase activity for an oligoprenyl diphosphate synthase from the beetle Phaedon cochleariae [33]. Similar small changes of the conditions, e.g., of the pH or the presence of different metal cofactors, may also change the product profile of a terpene synthase in different heterologous hosts. Changes in the product profile of terpene synthases depending on the host that was used to express the gene have been reported by Ginglinger et al., who have shown that Arabidopsis TPS10 produced mainly linalool when expressed in yeast and N. benthamiana, while the E. coli expressed protein catalysed the formation of mainly β-myrcene and β-ocimene [34]. The authors suggested different cofactor availabilities and biochemical conditions in the different hosts as the reason for their findings. Also Fischer et al. pointed out the effect that the host can have on the product specificity of terpene synthases [35]. In this context substrate availability is another issue to be considered: While no GGPP synthase is known in E. coli, this diterpene precursor is produced in the mitochondria of N. benthamiana. The yield of 18-hydroxydolabella-3,7-diene in planta of 26.2 mg per 100 g of fresh leaves is useful for the preparative scale production of the diterpene alcohol that can easily be isolated by extraction and column chromatography, which underpins the potential of plants, besides the recently reviewed microbial hosts for the sustainable production of diterpenes [36], as expression systems for secondary metabolite genes. The function of the investigated terpene synthase from C. pinensis in its natural context remains elusive, since neither (1R,3E,7E,11S,12S)-18-hydroxydolabella-3,7-diene nor germacrene A or its Cope rearrangement product β-elemene could be detected in laboratory cultures [37].

This work was funded by the DFG (DI1536/7-1) and by the Fonds der Chemischen Industrie.

© 2017 Dickschat et al.; licensee Beilstein-Institut.
This is an Open Access article under the terms of the Creative Commons Attribution License (http://creativecommons.org/licenses/by/4.0), which permits unrestricted use, distribution, and reproduction in any medium, provided the original work is properly cited.
The license is subject to the Beilstein Journal of Organic Chemistry terms and conditions: (http://www.beilstein-journals.org/bjoc) 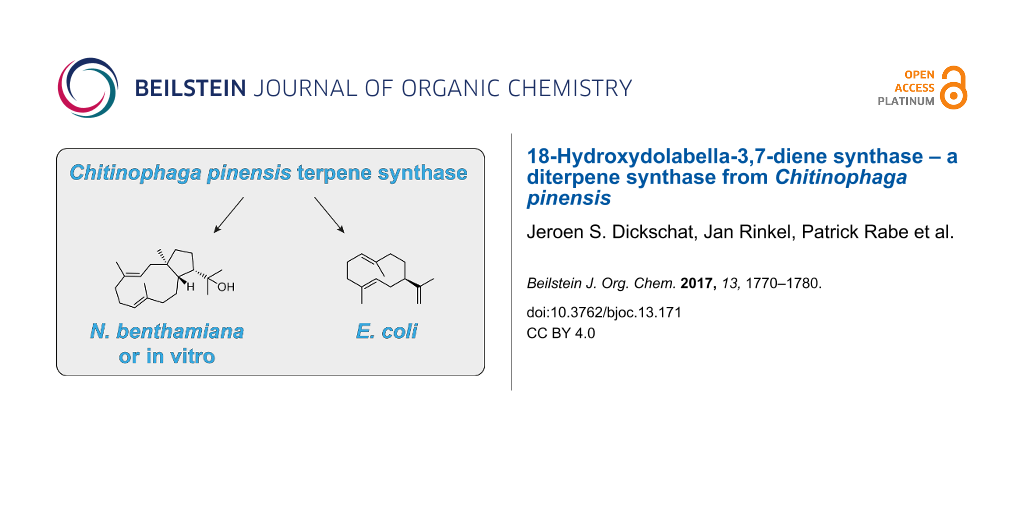