All articles from this author
Alysia Horvath


All articles from this author
Nicolas Blanchard

The acid-catalyzed ring-opening reactions of a cyclopropanated 3-aza-2-oxabicylic alkene using alcohol nucleophiles were investigated. Although this acid-catalyzed ring-opening reaction did not cleave the cyclopropane unit as planned, this represent the first examples of ring-openings of cyclopropanated 3-aza-2-oxabicyclo[2.2.1]alkenes that lead to the cleavage of the C–O bond instead of the N–O bond. Different acid catalysts were tested and it was found that pyridinium toluenesulfonate in methanol gave the best yields in the ring-opening reactions. The scope of the reaction was successfully expanded to include primary, secondary, and tertiary alcohol nucleophiles. Through X-ray crystallography, the stereochemistry of the product was determined which confirmed an SN2-like mechanism to form the ring-opened product.

Heterobicyclic alkenes are useful templates to generate complex cyclic and acyclic systems [1,2]. 3-Aza-2-oxabicyclic alkenes are particularly interesting due to their asymmetric nature and the ability to modify selected components of the molecule to create vastly different products. 3-Aza-2-oxabicyclic alkenes are generally modified in one of four ways (Scheme 1). One of the most interesting manipulations of 3-aza-2-oxabicyclic alkenes is the modification of the alkene component. The manipulation of the olefin can lead to a wide variety of products often in a single step, which is synthetically useful to create many highly substituted products with different stereochemical outcomes (Scheme 2). There are many reported examples in the literature of the modification of the alkene component which includes the reduction to form alkane 8 [3], oxidative cleavage of the C=C bond to form 9 [4], ring-opening metathesis to form functionalized alkenes 10 and 11 [4], dihydroxylation to form diol 12 [5], ruthenium-catalyzed [2 + 2] cycloaddition with unsymmetrical alkynes to form regioisomers 13 and 14 [6], and cycloadditions using nitrile oxides to provide 15 and 16 [7].

Another interesting modification of the alkene component is cyclopropanation. To date, there are a few reported examples in the literature of the cyclopropanation of 3-aza-2-oxabicyclic alkenes [15-17]. The addition of a cyclopropane unit adds ring-strain to the molecule that could lead to different pathways for ring-opening and further reactivity.

While the reactivity of 3-aza-2-oxabicyclo[2.2.1]hept-5-enes has been extensively studied (Scheme 1 and Scheme 2), there are only two examples in the literature investigating the reactivity of the cyclopropanated derivative (Scheme 4) and in both studies, cleavage of the N–O bond (b) was observed. While the Buono group demonstrated the reductive N–O bond cleavage to produce compound 25 as proof-of-principle [16], the Miller group reported the use of the cyclopropanated compound for the synthesis of 2’,3’-methano carbocyclic nucleosides via compound 24 (Scheme 5) [17]. Carbocyclic nucleosides are important synthetic targets because of their use as antiviral and antitumor agents [17]. Replacing the oxygen unit in the parent furanose ring with a methylene unit helps to stabilize the structure against cleavage by nucleoside phosphorylases or hydrolases [18,19]. The addition of a cyclopropane unit could provide further rigidity that could better stabilize the compound, thereby enhancing its biological activity. Both of these reported ring-openings of cyclopropanated 3-aza-2-oxabicyclo[2.2.1]alkenes reductively cleave the N–O bond (a) (Scheme 4), therefore, no examples cleaving the C–O bond have been reported in the literature. In this paper, we aim to explore the use of an acid catalyst with an alcohol nucleophile on the ring-opening of cyclopropanated 3-aza-2-oxabicyclic compound 19 for the cleavage of the C–O bond (b) (Scheme 4). We initially anticipated that the SN2’ type ring-opening would occur which would lead to the formation of ring-opened product 27 (Scheme 5). However, in all cases tested, only the SN2 type ring-opened product 26 was formed.

aIsolated yield after column chromatography. b1–4% of starting material was recovered.

To study the scope of the reaction, the use of different alcohol nucleophiles was tested (Table 3). With a primary alcohol, a decrease in reactivity was seen with increasing chain length (Me < Et < n-Bu; Table 3, entries 1–3) while maintaining reasonable yields. When 2-methoxyethanol was used as the nucleophile, the yield was decreased to 42% (Table 3, entry 4) while using isobutyl alcohol produced a similar yield of 41% (Table 3, entry 5). Using 2-methylbutanol produced a 34% yield of a 1:1 diastereomeric ratio of product (Table 3, entry 6) and using allyl alcohol produced ring-opened product 26g in a 38% yield (Table 3, entry 7). The use of secondary alcohols generally resulted in a decrease of yield of the ring-opened product (Table 3, entries 8–11). Isopropanol achieved a moderate yield of 51% (Table 3, entry 8) while using 2-butanol decreased the yield to 28% of a 1:1 diastereomeric ratio of product (Table 3, entry 9). The cyclic alcohols cyclohexanol and cyclopentanol (Table 3, entries 10 and 11) produced low amounts of the ring-opened alcohol in a 24% and 26% yield, respectively. The use of a tertiary alcohol surprisingly resulted in a moderate yield, with tert-butanol producing a 50% yield of product 26l (Table 3, entry 12, preparation of compound 26l from 23a and t-BuOH with PPTS was already published in reference [20]). When the aromatic alcohol phenol was investigated as a nucleophile, no reaction occurred though no starting material was recovered (Table 3, entry 13). Although in most cases, the starting material was completely consumed, the yields of these ring-opening reactions were only moderate (26–61%). This may be due to the decomposition or polymerization of the cyclopropanated 3-aza-2-oxabicyclic alkene under the reaction conditions. Through X-ray crystallography [20] and 1D NOESY 1H NMR the stereochemistry of the products was confirmed, with the nucleophile added syn to the cyclopropane ring and anti to the amino alcohol group.

When forming the ring-opening product, there are two possible mechanisms (Scheme 6).

If the oxygen atom is first protonated followed by cleavage of the C–O bond as seen in path A, the free carbocation 28 would form in an SN1-like manner. The nucleophile could therefore attack from either the top or the bottom, forming products 26a and 29. Alternatively, in path B the oxygen atom could be protonated and undergo an SN2-like mechanism with the nucleophile attacking from the open top face seen in 30, forming sole product 26a. If a free carbocation was formed as shown in path A, both stereoisomers 26a and 29 should have been observed, which was not evident. Also, if a free carbocation was formed the product likely would have undergone rearrangement of the cyclopropyl cation to ring-open the cyclopropane ring and form either a five or six-membered product, however, the cyclopropane is proved to be intact. Therefore, since only one single product 26a was observed, it is confirmed the product is formed through an SN2-like pathway seen in path B.

Experimental procedures and copies of 1H and 13C NMR spectra for compounds are provided in the Supporting Information.

This work was supported by the Natural Sciences and Engineering Research Council of Canada (NSERC).

© 2017 Tait et al.; licensee Beilstein-Institut.
This is an Open Access article under the terms of the Creative Commons Attribution License (http://creativecommons.org/licenses/by/4.0), which permits unrestricted use, distribution, and reproduction in any medium, provided the original work is properly cited.
The license is subject to the Beilstein Journal of Organic Chemistry terms and conditions: (http://www.beilstein-journals.org/bjoc) 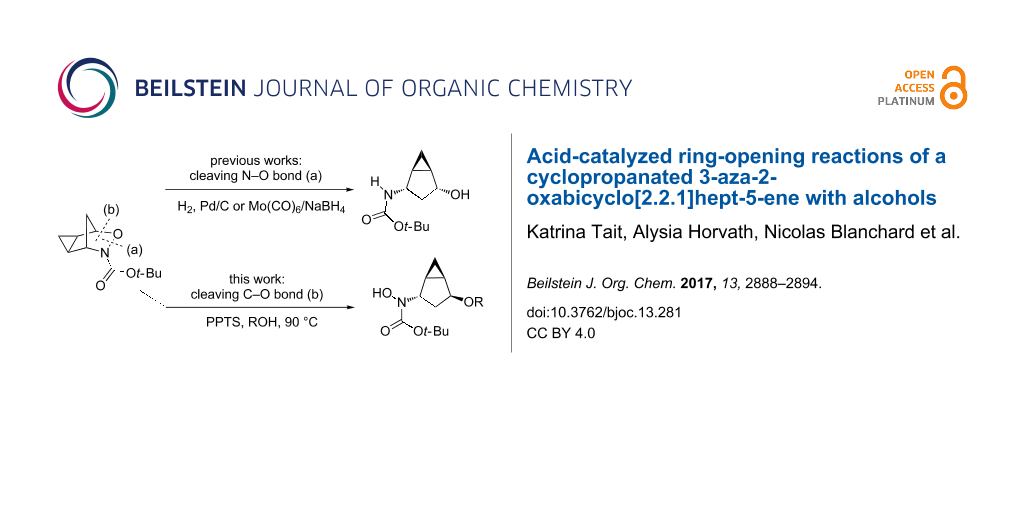