All articles from this author
Massimiliano Lupacchini


All articles from this author
Ruben Guerra


All articles from this author
Ilya Taydakov

Moscow Institute of Physics and Technology, Institutskiy per., 9, 141700, Dolgoprudny, Russia


All articles from this author
Lucia Tonucci


All articles from this author
Nicola d’Alessandro


All articles from this author
Frederic Lamaty


All articles from this author
Jean Martinez


All articles from this author
Evelina Colacino

The mechanochemical preparation of highly functionalized 3,5-disubstituted hydantoins was investigated in the presence of various poly(ethylene) glycols (PEGs), as safe grinding assisting agents (liquid-assisted grinding, LAG). A comparative study under dry-grinding conditions was also performed. The results showed that the cyclization reaction was influenced by the amount of the PEG grinding agents. In general, cleaner reaction profiles were observed in the presence of PEGs, compared to dry-grinding procedures.

Poly(ethylene) glycols (PEGs) are eco-friendly solvents [1,2], finding applications in the biomedical field and for pharmaceutical formulations [3] and catalysis [4]. PEG-based reaction media [1] are safe reaction environments, efficiently heated by microwaves [5], but their use in organic transformations activated by other alternative energy inputs is still scarce. Only three examples highlight their peculiar role for metal-catalysed processes in a ball mill (Mirozoki–Heck reaction) [6], by ultrasound (copper-catalysed cyanation reaction) [7], and for co-crystal formation in the polymer-assisted grinding process (POLAG) [8]. However, to the best of our knowledge, the systematic investigation of the influence of PEG polymers has not been reported yet for organic syntheses promoted by mechanical energy.

We firstly reported the positive influence of PEG solvents as grinding agents for the mechanochemical preparation of an active pharmaceutical ingredient (API), the anticonvulsant drug ethotoin 7 [9] (marketed as Peganone®, Scheme 1). We describe herein the impact of the addition of variable amounts of PEG, PEG chain length and end terminal groups, for the preparation of diverse 3,5-disubstituted hydantoins from α-amino methyl esters 1, via an in situ intramolecular cyclization reaction of the ureido derivative B, which was obtained from N-carbamoylimidazole activated amino ester derivative A by reaction with various amines [9-11] (Scheme 1). Hanusa’s formalism was used to represent the reaction activated by mechanochemical energy [12].

The yields, reaction rates and chemoselectivity obtained in the presence of melted PEGs were compared with the results obtained in dry-grinding conditions.

H-Leu-OMe was used as benchmark for the mechanochemical preparation of 3-ethyl-5-isobutylhydantoin (2a) (R1 = CH2CH(CH3)2 and R2 = CH2CH3, Scheme 1) [9]. The reaction was screened in the presence of various PEG additives (Table 1), by adding variable amounts of PEGs, with different molecular weights (600 < Mw < 5000 Dalton) or chain end groups (dihydroxy, mono- or dimethyl ether substituents) in the second step (Table 1). The first set of experiments was aimed to determine if the addition of variable amounts of solid MeO-PEG-2000-OMe (Table 1, entries 2–5) or HO-PEG-3400-OH (Table 1, entries 7–10) could impact both the reaction yield and rate, compared to dry-grinding conditions previously reported [9] (Table 1, entry 1). Yields were generally improved in the presence of variable amounts of PEGs (Table 1, entries 2, 3 and 7, 8), starting to decrease when reaching a critical value at 675 mg (Table 1, entries 5 and 10). The substrate conversion remained moderate, the cyclization reaction of the corresponding ureido derivative B-Leu was slowed down and the methyl ester moiety was partially hydrolysed. Indeed, the base activity was increased due to the presence of water in PEG as well as by the PEG crown-ether-like effect [1], chelating the potassium cations.

It is worth noticing here that the crude mixture was cleaner in comparison with dry-grinding conditions. Indeed, the symmetrical urea of the starting amino ester – obtained from the corresponding N-carbamoyl imidazole amino ester A – was not observed, as shown by the LC–MS analyses of the crude mixture. An approach complementing similar strategies was already described to avoid the formation of symmetrical ureas in solution [13].

The preparation of the hydantoin 2a was also investigated using batches of solid PEGs (Mw = 2000 and 3400) in which PEGs with lower molecular weight (Mw = 200–400) were eliminated before use by a precipitation/filtration procedure (Table 1, entries 4 and 9), according to a well-established protocol [14-16]. Even when the PEG polymers were supposed to be homogeneously liquids (melting point around 55 °C) at the operational temperature, comparable yields could be obtained only by extending the reaction time (3 h instead of 2 h), when ‘pre-treated’ PEGs were used instead of ‘unfiltered’ PEGs (Table 1, entries 3 and 8).

This observation suggested that changes in the ‘physical state of the system could be induced by specific interactions with PEG polymers and influenced both by the viscosity and the polymer chain length. After selecting the optimal polymer amount (450 mg mmol−1), the study was carried on by increasing (Table 1, entry 11) or reducing (Table 1, entries 12 and 13) the polymer chain length, changing the end terminal substituents (Table 1, entries 6 vs 3), and adding glycerol instead of PEGs as additive (Table 1, entry 14). As a result, the effect of using different end terminal groups was not markedly significant, the yield was a function of the average molecular weight of the PEG used: HO-PEG-5000-OH (Table 1, entry 11) was probably too viscous to allow the diffusion of reactants. Decreased and comparable yields were also observed by reducing the PEG chain length (Table 1, entry 13) and by using glycerol. It is also worth noting here that not only viscosity, but any modification of the physical state of the system impacted the outcome of the reaction. Indeed, HO-PEG-600-OH (0.119 cSt) led to comparable yields when replaced by a more viscous liquid like glycerol (1.12 cSt) (Table 1, entry 14), an eco-friendly solvent still not investigated for liquid-assisted grinding procedures. In fact such a compound is becoming a green source of several building blocks since glycerol is actually produced in very large amount as byproduct from biodiesel synthesis [17].

With this background, 3-ethyl-5-benzylhydantoin (3a) [9] (R1 = CH2Ph and R2 = CH2CH3) was also prepared using solid MeO-PEG-2000-OMe and HO-PEG-3400-OH as additives (Table 2). Using (L)-H-Phe-OMe.HCl as substrate, as a general trend and in comparison with the dry-grinding procedure previously reported [9] (Table 2, entry 1), yields were generally lower with PEG additives, independently on their size and amounts (Table 2). This trend, apparently in contrast with the results illustrated so far for 3-ethyl-5-isobutylhydantoin (2a) [9] suggested that the reactivity of the system might be also a function of the nature of the amino ester side chain, influencing the solubility of the reactants, reaction intermediates and final products. However, no differences in yields were observed when (D)-H-Phe-OMe was used, instead of its enantiomer (Table 2, entry 3).

These results confirmed the role played by polymers in mechanochemical transformations, also leading to cleaner reaction profiles. However, the choice of the suitable polymer for a specific transformation was not trivial: the ‘fine tuning’ of the physical state of the system was also related to specific physical aspects also connected to the intrinsic properties of the polymer. In addition, PEG polymers were demonstrated as a valid eco-friendly and safe alternative to classic solvents used in liquid-assisted-grinding procedures (LAG) [18-22] due to their low melting point (45–60 °C), enabling their use as melt during grinding, low toxicity and low vapour pressure, reducing the risk of explosions or overpressure that might be encountered on large scale LAG-procedures.

© 2017 Mascitti et al.; licensee Beilstein-Institut.
This is an Open Access article under the terms of the Creative Commons Attribution License (http://creativecommons.org/licenses/by/4.0), which permits unrestricted use, distribution, and reproduction in any medium, provided the original work is properly cited.
The license is subject to the Beilstein Journal of Organic Chemistry terms and conditions: (http://www.beilstein-journals.org/bjoc) 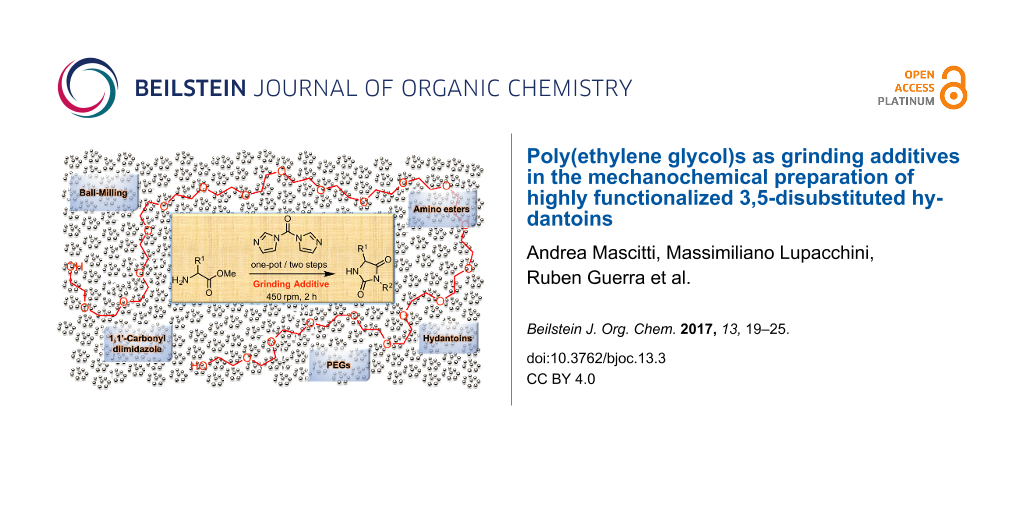