All articles from this author
Yue He

In search for new natural products, which may lead to the development of new drugs for all kind of applications, novel methods are needed. Here we describe the identification of electrophilic natural products in crude extracts via their reactivity against azide as a nucleophile followed by their subsequent enrichment using a cleavable azide-reactive resin (CARR). Using this approach, natural products carrying epoxides and α,β-unsaturated enones as well as several unknown compounds were identified in crude extracts from entomopathogenic Photorhabdus bacteria.

Microorganisms are a major source for novel natural products and the subsequent development of new drugs for all kinds of applications [1,2]. For example, the discovery of the fungal natural product cyclosporine as an immunosuppressant drug facilitated modern organ transplantation [3,4].

The increasing sensitivity of analytical methods, especially in mass spectrometry, enables the detailed analysis of various natural product producing microbes. Much more compounds have been identified than originally thought, but often these are produced only at a very low level. This is also reflected by the genome sequences of bacteria and fungi that often encode numerous biosynthesis gene clusters (BGC) with most of the corresponding natural products unknown for several reasons: these BGCs are silent under standard laboratory conditions [5], the compounds are too labile for isolation or they are produced in amounts still below the detection limit of modern mass spectrometers.

Therefore it is desirable to have multiple and complementary methods available that allow the detection of several different natural product classes. Besides the traditional chemical screening and bioactivity-guided isolation, the exploitation of the inherent properties of natural products is also feasible. Consequently, simple functional groups of natural products like dehydroalanine [6,7], ketones, aldehydes [8,9], carboxylic acids [8,9], amines [8-10], thiols [8,9], alcohols [11], epoxides [12], terminal alkynes [13,14] and azides [15] can be targeted to introduce a label. Such labels might increase the visibility in UV or MS detection in liquid chromatography coupled to UV or mass spectrometry. Alternatively, natural products can be immobilized on reactive resins by making use of their chemical functionality and can be eluted after washing off all non-desired substances [8,9,11,13,15].

The recently introduced cleavable azide-reactive resin (CARR (2), Scheme 1) is such a resin able to react with a broad range of azides [15]. Thus, the metabolic fate of azide-containing biosynthesis intermediates or building blocks can be studied and natural products containing these azides can be identified.

Herein we describe the application of the CARR enrichment for the detection of electrophilic natural products using azide as the nucleophile. Indeed, we could detect epoxystilbene 1 and three glidobactins from different Photorhabdus strains and some of these compounds are produced in such low amounts that they are not detectable in standard crude extracts.

In order to evaluate whether the CARR approach is suitable for epoxide detection, we azidated commercially available trans-stilbene oxide as representative model compound for 1 affording the vicinal azido alcohol, 2-azido-1,2-diphenylethanol (Supporting Information File 1, Figure S2) [16,17]. The azidation was carried out with sodium azide and ammonium chloride in 80% MeOH under reflux overnight (Supporting Information File 1, Figure S2). The azido alcohol was then incubated with CARR (2) in acetonitrile overnight followed by extensive washing of the resin with methanol and dichloromethane. After disulfide-bond cleavage with a solution of tris(2-carboxyethyl)phosphine (TCEP) in a 1:5:10 mixture of phosphate-buffered saline (PBS)/chloroform/methanol at pH 7, the filtrate was analyzed by HPLC–MS. As expected the corresponding mass m/z 493.2 [M + H]+ of the cleaved cycloaddition product could be directly detected in the base-peak chromatogram (BPC) showing the characteristic fragmentation pattern of the CARR adducts (Supporting Information File 1, Figure S3) [15]. Additionally, the detection limit of the model epoxide was investigated in a complex environment. For this, defined amounts of trans-stilbene oxide were added to liquid Lysogeny Broth (LB) medium. The obtained methanolic Amberlite XAD-16 extracts were azidated, enriched and analyzed. Up to a final concentration of 5 µg/L (≈25 nmol/L) the epoxide could be detected (Supporting Information File 1, Figure S4). Following these results, we tested the method with an XAD extract of P. luminescens TT01 (Figure 1).

The obtained XAD extract was treated the same way as trans-stilbene oxide, and any potentially containing epoxide should be converted into the corresponding vicinal azido alcohol. Afterwards the azidated extract was incubated with 2, the disulfide bond was cleaved and the filtrate subsequently analyzed by HPLC–MS. To our surprise, the BPC showed one distinct peak at 8.1 min with a characteristic MS2 fragmentation pattern of a derivatized azide and a mass of m/z 567.2 [M + H]+. This mass corresponds to the calculated mass of 3 (Figure 1) derived from the derivatization of epoxystilbene 1, an oxidized isopropylstilbene derivative from this strain. Since only a single peak could be seen within the chromatogram, we assume that the conjugate addition took place only on the less hindered position in epoxide 1 without formation of the other possible regioisomer. For further structural confirmation, P. luminescens TT01 was cultivated in 13C-labeled medium prior to the azidation and enrichment procedure indeed confirming the incorporation of 17 carbon atoms in 3 (Supporting Information File 1, Figure S5). Furthermore, the molecular formula of the cleaved azide–alkyne cycloaddition product 3 was confirmed by HPLC–HRMS (calcd mass: m/z 567.2636 [M + H]+, found: m/z 567.2635 [M + H]+, Δppm = 0.1). Compound 1 could hardly be detected in extracts from standard growth media but was detected from infected insects and media mimicking the insect hemolymph [18-20]. Clearly the biosynthesis of this compound is strictly regulated and moreover it is a highly labile compound that is probably rapidly degraded [21]. Only a very weak signal of m/z 271.1 [M + H]+ could be detected at 8.5 min, which can be associated with 1.

The combination of the reactivity-guided introduction of an azide functionality into electrophilic natural products and the subsequent azide enrichment on a solid phase facilitates the detection of epoxides and α,β-unsaturated enones in XAD extracts of Photorhabdus. Epoxystilbene (1) and glidobactins have never been observed before in XAD extracts of Photorhabdus grown under standard conditions. Most likely this is due to very low production levels of these compounds thus illustrating the power of this method. We deem that many more electrophilic compounds were just overlooked in the past due to their low concentrations. In combination with labeling experiments even the nature of the parent natural product could be revealed. Moreover, a possible scale-up of this procedure should enable the preparative purification of yet unidentified compounds as well as the structural confirmation of the identified structures. This approach can also be applied to extracts of other bacteria, fungi and plants and can give at least hints on new electrophilic natural products, where their reactivity against azide might also reflect their biological activity.

The authors are grateful to Dr. A. J. Perez for providing CARR and helpful discussions, as well as Lei Zhao for providing purified glidobactin A. This work was supported by a European Research Council starting grant under grant agreement number 311477.

© 2017 Wesche et al.; licensee Beilstein-Institut.
This is an Open Access article under the terms of the Creative Commons Attribution License (http://creativecommons.org/licenses/by/4.0), which permits unrestricted use, distribution, and reproduction in any medium, provided the original work is properly cited.
The license is subject to the Beilstein Journal of Organic Chemistry terms and conditions: (http://www.beilstein-journals.org/bjoc) 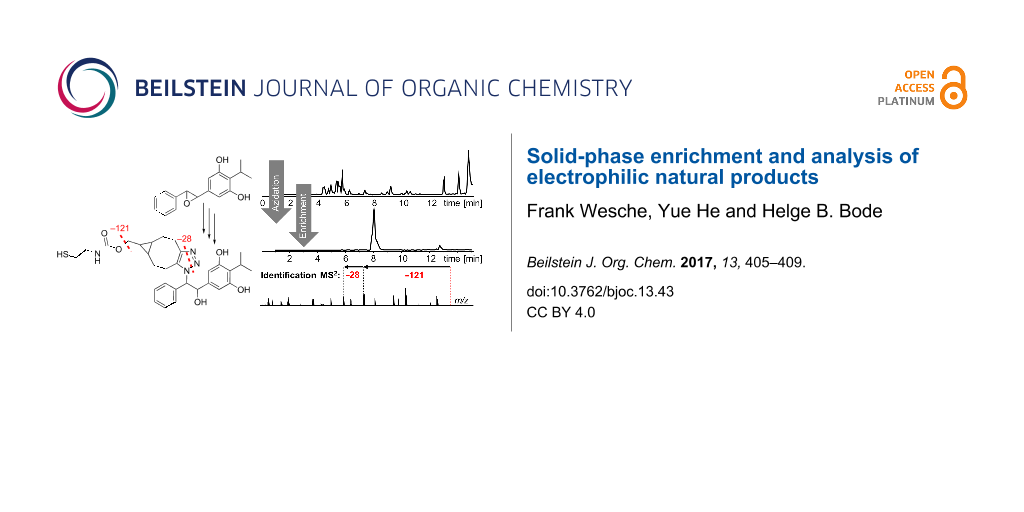