All articles from this author
Mingbo Zhou


All articles from this author
Bangshao Yin


All articles from this author
Ling Xu

A π-extended “earring” subporphyrin 3 was synthesized from β,β′-diiodosubporphyrin and diboryltripyrrane via a Suzuki–Miyaura coupling and following oxidation. Its Pd complex 3Pd was also synthesized and both of the compounds were fully characterized by 1H NMR, MS and X-ray single crystal diffraction. The 1H NMR spectra and single crystal structures revealed that aromatic ring current did not extend to the “ear” in both of the two compounds. Their UV–vis/NIR spectra were recorded and the absorption of both compounds is extended to the NIR region and that the absorption of 3Pd is further red-shifted and more intense.

Since its first synthesis in 2006 [1,2], subporphyrin, the lowest homolog of porphyrins, has received considerable attention [3-8] due to its 14π-electron configuration and bowl-shaped structure. In addition the intense absorption in the UV–vis region [9-24] makes it a promising building block in pigments. The functionalization of subporphyrin can proceed at various sites such as the central boron atom [25-30], meso- [31,32] and β-position [33-35]. By using the method developed by Osuka the β,β′-diborylsubporphyrins [36] can be obtained in high yields. A subsequent Suzuki–Miyaura coupling smoothly affords various β-aryl-substituted subporphyrins [37]. Alternatively, some β-aryl/vinyl-substituted subporphyrins can be synthesized from aryl/vinyl borate and the corresponding β,β′-dihalosubporphyrins, which can be obtained by the treatment of β,β′-diborylsubporphyrins with NBS/NIS in the presence of a Cu(I) salt [36].

Recently, our group successfully prepared multiple cavities π-extended “earring” porphyrins through the aforementioned Suzuki–Miyaura coupling reaction and subsequent oxidation [38]. In this case β,β′-dibromo/tetrabromoporphyrins and diboryltripyrrane were applied as reactants. We discovered that both the π-extended “earring” porphyrins and the corresponding Pd complexes exhibited remarkably near-infrared absorptions.

Based on our previous work, we herein designed a subporphyrin with one “earring”. The different geometry and properties could be envisioned due to the bowl-shaped structure and 14π-electron configuration of subporphyrin. To construct the skeleton of the “earring” subporphyrin, we performed a Suzuki–Miyaura coupling reaction between β,β′-diiodosubporphyrin 1 [37] and diboryltripyrrane 2 [38] (Scheme 1). Monitored by TLC, we merely observed a complicated mixture without any major band during the progress of the reaction. However, several clear bands emerged after stirring the mixture overnight at ambient conditions. This observation revealed that the coupling products could be oxidized by air and thereafter the target “earring” subporphyrin 3 was obtained in an isolated yield of 15% after column chromatography.

The mass spectrum of 3 exhibits a parent-ion peak at m/z = 911.4036 (calcd for C64H48BN6 [M]+ = 911.4028), which is in agreement with its structure. The 1H NMR spectrum of 3 (Figure 1) indicates it a symmetric structure. The peak appearing at 17.02 ppm is assigned to the NH since a D2O exchange experiment lead to its disappearance. While the peak at 15.82 ppm can be assigned to the meso-H of the subporphyrin moiety, which is shifted to a lower field region in comparison to 8.60 ppm of 4-tolyl-(5,10-di-(4-tolyl)-subporphyrinato)boron(III) (1a). These two signals at 17.02 ppm and 15.82 ppm can be attributed to the antiaromatic character of the ear-containing macrocycle, which is quite similar to the analogous “earring” porphyrin [38]. Furthermore, the antiaromaticity of the ear-containing macrocycle is proved by the large positive NICS value in the hole as well as the anticlockwise ring currency (see Supporting Information File 1 for details).

Concerning the diameter of the cavity and the strain of the skeleton, we assumed that some metal ions may insert into the hole surrounded by the tripyrrin moiety. Experimentally, 3Pd can be formed quantitatively by simply mixing Pd(OAc)2 with a CH2Cl2/MeOH solution of 3 at room temperature. This transformation is confirmed by MS with a parent-ion peak at m/z = 1015.24 (calcd for C64H46BN6Pd, [M]+ = 1015.29).

In the 1H NMR spectrum of 3Pd (Figure 3), no signals are detected in the very low field region. This indicates that the Pd is inserted in the cavity of 3 with the deprotonation of both N-H and meso-H. Meanwhile all signals belong to aromatic hydrogens shifted to a slightly higher field region after the complexation with Pd, which reveals that the insertion of the metal does not change the antiaromatic pathways in 3.

Fortunately we obtained single crystals of 3Pd from its CH2Cl2/CDCl3/MeOH solution via vapor diffusion. All of the bond lengths were carefully measured based on the diffraction results (Figure 4). We found that despite all peripheral C–C bond lengths in the tripyrrin moiety were still alternating (1.348(5)–1.441(4) Å), the differences among them were somewhat smaller compared to those of 3. While the cavity surrounded by the tripyrrin moiety in 3Pd has a long axis of 4.123(3) Å (N–N distance) and a short axis of 4.076(4) Å (N–C distance), both of which are shorter than that of 3. This contraction is probably due to a slight mismatch of the radii between the Pd center and the cavity. In addition, this mismatch also leads to a further twist of the pyrrole units in the tripyrrin moiety. The dihedral angles of two adjacent pyrrole units in the tripyrrin moiety are 13.7(1)° and 18.4(1)°, respectively. The difference between the two dihedral angles is much larger than that in 3.

The UV–vis/NIR absorption spectra of 3 and 3Pd are shown in Figure 5. However, no fluorescence emission can be observed for 3 and 3Pd. Both 3 and 3Pd display broad Soret bands and Q-like bands and all bands are red-shifted compared to the corresponding bands of 1a. In addition the absorptions of the Soret bands in 3 and 3Pd are much weaker than in case of 1a. For 3, its tail of Q-like band extends to over 1000 nm. While for 3Pd, its tail of Q-like band extends to over 1400 nm with several observable peaks. This remarkable absorption in the NIR region is comparable with that of the analogue “earring” porphyrins and reveals the π-conjugation between the subporphyrin and tripyrrin moiety.

The work was supported by the National Nature Science Foundation of China (Grant Nos. 21702057, 21602058, 21772036), Scientific Research Fund of Hunan Provincial Science and Technology Department (Grant No. 2017JJ3199), Scientific Research Fund of Hunan Provincial Education Department (Grant No. 17B156). We thank Prof. Shubin Liu and Mr. Donghai Yu for their help in DFT calculations.

© 2018 Guan et al.; licensee Beilstein-Institut.
This is an Open Access article under the terms of the Creative Commons Attribution License (http://creativecommons.org/licenses/by/4.0). Please note that the reuse, redistribution and reproduction in particular requires that the authors and source are credited.
The license is subject to the Beilstein Journal of Organic Chemistry terms and conditions: (https://www.beilstein-journals.org/bjoc) 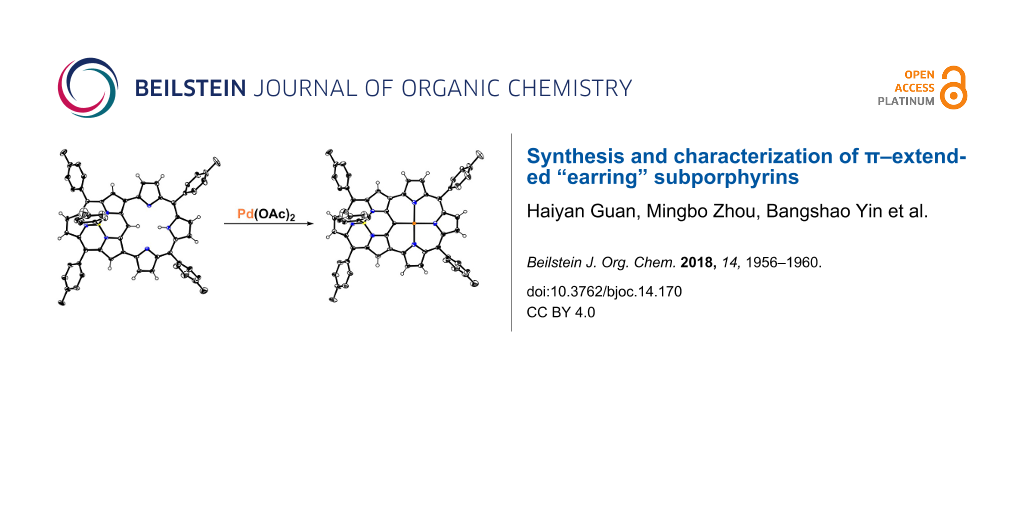