The structure of the sesquiterpene onchidal (6), a component of the defensive secretion of the shell-less mollusc Onchidella binneyi, contains a masked α,β-unsaturated 1,4-dialdehyde moiety, the presence of which has been proposed to be the cause of the feeding deterrent activity exhibited by the mollusc. We have found onchidal acts as an electrophile, reacting rapidly with the model nucleophile n-pentylamine forming diastereomeric aminated pyrrole adducts. Somewhat surprisingly, no reaction was observed between onchidal and n-pentanethiol. Structurally simplified n-pentyl 11–13 and cyclohexylmethyl 15–17 analogues of onchidal were prepared and demonstrated similar amine-selective reactivity. Onchidal and analogues reacted with the model protein lysozyme, forming covalent adducts and leading to protein cross-linking. These results provide preliminary evidence supporting the molecular mechanism of biological activity exhibited by onchidal.

More than 80 terpenoid natural products containing the 1,4-dialdehyde moiety have been isolated from sources such as fungi, algae, sponges and molluscs [1]. Many of these natural products exhibit biological activity, ranging from anti-inflammatory to antimicrobial and antifeedant activities [1]. The prototypical examples polygodial (1) and scalaradial (2, Figure 1) both exhibit antifeedant activity against worms and fish [1,2], with recent studies also showing that 1 is a potential lead as a marine antifouling agent [3].

The ichthyotoxic masked dialdehyde caulerpenyne (3), a major component of extracts of the green alga Caulerpa taxifolia, exhibits antiproliferative activities as well as wound healing abilities with the latter resulting from rapid transformation to the highly reactive 1,4-dialdehyde, oxytoxin 2 (4) [4-6]. Oxytoxin 2 (4) is itself a natural product, produced by the mollusc Oxynoe olivacea from a diet-derived (Caulerpa algae) precursor and is predominantly present in the predator-deterring mucous secretion of the mollusc [7]. Two structurally-related masked dialdehydes, 5 (from Caulerpa ashmeadii) [8] and onchidal (6) [9,10] (from the defensive secretion of the mollusc Onchidella binneyi) also exhibit biological properties including feeding deterrence, antibacterial and anticholinesterase activities.

Chemical reactivity studies using polygodial (1), scalaradial (2) and caulerpenyne (3) have demonstrated evidence of pyrrole formation upon reaction with primary amines, with conclusions drawn attributing bioactivities such as antifeedant activity to this chemical reactivity [1,11-13]. In an effort to ascertain whether the mollusc metabolite onchidal is susceptible to nucleophilic attack in a similar manner, herein we report on the reactivity of onchidal and a library of simplified n-pentyl and cyclohexylmethyl model compounds towards thiol and amine nucleophiles as well as their reactivity towards a model protein target, lysozyme.

A mechanism that leads to the formation of diaminated pyrrole adduct 7 starts with amine-induced formation of a 1,4-dialdehyde, which then undergoes Paal–Knorr pyrrole formation to give an azafulvinium intermediate (Scheme 2). This intermediate could then undergo trapping with an additional mole of amine nucleophile to give 7 as a mixture of diastereomers.

In an effort to reduce the complexity of the NMR spectra observed for the diastereomeric onchidal–pyrrole adducts, a range of simpler achiral n-pentyl 11–14 and cyclohexylmethyl 15–18 side-chained model compounds, as either the dialdehyde or masked dialdehyde variants, were prepared (Figure 2).

Horner–Wadsworth–Emmons (H.W.E.) reaction of n-hexanal with phosphonoester 19 [15] afforded an E/Z mixture of olefinic diesters, purification of which by silica gel column chromatography afforded a fraction of the desired E diester 20 (60%), a second fraction comprised of a 5:1 E/Z mixture and a third fraction of Z diester 21 (10%, Scheme 3). The reduction of diesters 20 (E) and 21 (Z) with LiAlH4 afforded diols 22 and 23 in 63% and 67% yield, respectively. Subsequent oxidation of 22 with DMP afforded dialdehyde 11 in 31% yield. Correspondingly, the reaction of diol 23 with DMP afforded a mixture of dialdehyde 11 with dialdehyde 12 (1:1). Attempts at chromatographic separation of these two isomers resulted in degradation of 12. Final conversion of 11 to enol acetate 13 was achieved by overnight reaction with pyridine and acetic anhydride. Purification by silica gel column chromatography afforded the desired E,E enol acetate 13 in 17% yield. A lack of purified dialdehyde 12 prevented any attempt at the preparation of enolacetate 14.

Having developed a successful synthetic route to n-pentyl side-chain dialdehyde 11 and enol acetate 13, the synthesis of analogues 15–18 with a side-chain more comparable to onchidal (6) were attempted. H.W.E reaction of 2-cyclohexylacetaldehyde (24) [16] with phosphonoester 19 afforded a fraction of the desired E diester 25 in 15% yield, a fraction of Z diester 26 in 1.5% yield and another fraction of a mixture of the two (5:1) (Scheme 4). The reaction of diesters 25 and 26 with LiAlH4 afforded the corresponding diols 27 and 28 in 61% and 71% yield, respectively, which upon oxidation (DMP) afforded dialdehydes 15 and 16 in 49% and 73% yield, respectively. The reaction of dialdehyde 15 with Ac2O and pyridine afforded enol acetate 17 in 43% yield after purification. Interestingly, the reaction of dialdehyde 16 with Ac2O/pyridine only afforded decomposition products, failing to give 18.

As proposed for the onchidal–diamine adduct, the formation of 29 is presumably a consequence of dialdehyde 11 undergoing Paal–Knorr pyrrole formation to form an azafulvenium intermediate which is subsequently quenched with another mole of amine nucleophile to form the observed product (Scheme 5).

Similar reactivity profiles were observed for each of cyclohexylmethyl dialdehyde 15, and enol acetates 13 and 17, with no reactivity towards 1-pentanethiol being detected, but with rapid reaction with 1-pentyamine to form pyrrole adducts. In the case of dialdehyde 15, the reaction product was determined to be 31 (12% plus 18% as the salt, 32, Figure 4), while enol esters 13 and 17 gave 29 and 31 (7% and 5% yields), respectively, upon reaction with the amine nucleophile.

We next investigated the reactivity of onchidal (6) and analogues 11–13 and 15–17 towards the lysine-rich model protein lysozyme. Previous studies have reported hen egg white lysozyme (HEWL) as a suitable target of electrophiles due to its commercial availability, a well-characterized amino acid sequence and the ability for routine (+)-ESIMS analysis to identify covalent adduct formation [17].

Reactivity studies were conducted with commercially available HEWL, in a solution of MeOH/H2O (+ 0.5% formic acid), and the reaction products were investigated by (+)-ESIMS. Preliminary reaction of onchidal (6) with lysozyme was conducted in a solvent mixture of MeOH/H2O (1:15) at 20 °C and examined regularly by (+)-ESIMS. No adducts were detected at 20 hours, but by day 3 (72 h), three new peaks representing mass additions of +198 mu, +216 mu, and +230 mu were detected (Figure 5 and Table 1). These adducts are likely the result of the reaction of lysine residues present in the enzyme [17]. The latter two adducts are proposed to be pyrrole adducts with incorporation of solvolytic H2O and methanol, respectively. The +198 mu adduct could have arisen via elimination of H2O or methanol from the corresponding adducts, or alternatively, from deprotonation of the anticipated lysozyme-onchidal azafulvenium intermediate. The adduct product distributions were calculated from the deconvoluted (+)-ESI mass spectrum, identifying a total lysozyme modification yield of 15% (Table 1). The presence of a large amount of unmodified lysozyme (85%), even after 72 h, was attributed to the slow reactivity of the enol acetate functionality of onchidal, as observed in the original model studies.

Next, the reactivity of dialdehydes 11, 12, 15 and 16 and enol acetates 13 and 17 with lysozyme were examined in a similar manner with mass spectrometry identifying varying degrees of modification. Of the dialdehydes, 11 was the most reactive leading to rapid formation of a white precipitate, speculated to be due to formation of insoluble higher order protein adducts. ESIMS analysis of the supernatant identified only a trace of unreacted lysozyme and detection of ions arising from extensive modification of the enzyme. To simplify the analysis of these adducts, the incubation time for 11 was shortened to 4 hours, with resultant ESIMS analysis identifying the presence of the three expected pyrrole adducts with mass additions of +132, +150 and +164 (Table 1). Interestingly, Z-dialdehyde 12, formed the same adducts as 11 but at a much slower rate, requiring overnight incubation. In addition to the expected mono-adducts [+132, +150, +164], lysozyme di-adducts were also detected at +264 (2 × alkene), +282 (alkene and OH), +296 (alkene and OMe), +314 (OH and OMe), and +328 (2 × OMe).

Sodium dodecyl sulfate polyacrylamide gel electrophoresis (SDS-PAGE) was used to look for the presence of protein crosslinking arising from the incubation of dialdehydes 11 and 15 and enol acetate 13 with lysozyme. Bands corresponding to dimers (28 kDa) were evident for both the n-pentyl and cyclohexylmethyl dialdehydes, with a faint band at 50 kDa also evident in the n-pentyl dialdehyde incubation reaction, indicating the presence of lysozyme trimers (Figure 6). No crosslinking was detected for enol acetate 13, likely due to its low reactivity as determined from the n-pentylamine incubation studies.

A chemical reactivity study of the opisthobranch mollusc metabolite onchidal (6) has identified that it can react with amines to form pyrrole products. The reaction was presumed to proceed via amine-mediated conversion of the enolester containing natural product to a 1,4-dialdehyde, which then undergoes Paal–Knorr pyrrole formation. Structurally simplified n-pentyl- and cyclohexylmethyl-dialdehydes were synthesized and found to undergo similar pyrrole forming reactions with pentylamine. These reactions were also apparent with the lysine-rich enzyme hen egg white lysozyme, with onchidal (6) and model compounds 11–13 and 15–17 affording pyrrole adducts of the enzyme that were detected by (+)-ESIMS. The more reactive dialdehydes were also found to lead to protein crosslinking with formation of lysozyme dimers and trimers. Taken together, these results support the hypothesis that onchidal (6) could be used in chemical defense in a similar manner to related sesquiterpenoid dialdehydes and enol esters.

We thank Dr. Michael Schmitz and Tony Chen for their assistance with acquisition of NMR and mass spectrometric data.

Characterization of the synthetic cannabinoid MDMB-CHMCZCA

© 2018 Cadelis and Copp; licensee Beilstein-Institut.
This is an Open Access article under the terms of the Creative Commons Attribution License (http://creativecommons.org/licenses/by/4.0). Please note that the reuse, redistribution and reproduction in particular requires that the authors and source are credited.
The license is subject to the Beilstein Journal of Organic Chemistry terms and conditions: (https://www.beilstein-journals.org/bjoc) 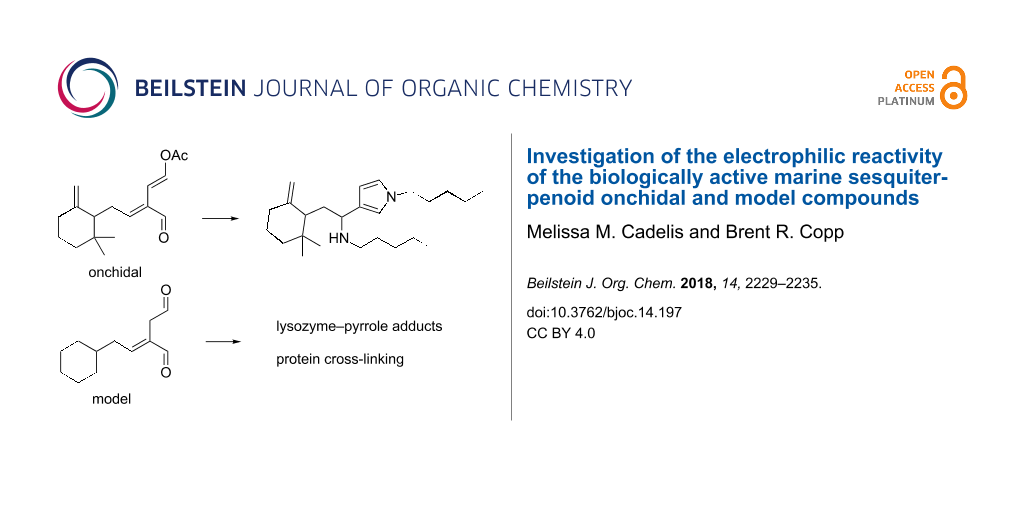