All articles from this author
Jianjun Huang


All articles from this author
Anton A. Nechaev


All articles from this author
Ruwei Yao


All articles from this author
Jing Gong


All articles from this author
Erik V. Van der Eycken


All articles from this author
Olga P. Pereshivko


All articles from this author
Vsevolod A. Peshkov

A series of propargylamides containing an electron-rich benzene ring was prepared through the Ugi reaction of 3,5-dimethoxyaniline with various propiolic acids, aldehydes and isocyanides. Subjecting these adducts to a gold-catalyzed intramolecular alkyne hydroarylation process allowed to efficiently construct the 2-quinolone core bearing a branched substituent on the nitrogen atom.

Quinoline and its oxidized derivatives, 2-quinolone and 4-quinolone, are the core structural elements of many natural products and pharmaceutical agents [1-3]. In particular, 2-quinolone derivatives show a broad range of biological activities including antiviral [4-7], antimicrobial [8,9], antiparasitic [10,11], anti-inflammatory [12,13] and anticancer [9,13-19]. In addition, 2-quinolones were identified as promising entities for the treatment of neuropathic pain [20-22] and erectile dysfunction [23]. Therefore, the elaboration of practical methodologies for the synthesis [24] and functionalization [25-29] of the 2-quinolone scaffold has become a budding research trend. In the last decade, a great number of efficient approaches has been developed utilizing transition metal-catalyzed [30-32], Lewis acid-mediated [33], and radical cyclizations [34] of various aniline derivatives with most recent strategies focusing on the implementation of transition metal-catalyzed C–H activation methods [35,36].

One of the common approaches towards 2-quinolones 2 involves the intramolecular Friedel–Crafts hydroarylation [37,38] of N-arylamides of 3-substituted propynoic acids 1 (Scheme 1). It was found that the use of superstoichiometric amounts of strong Brønsted [39-41] or Lewis [40,41] acids give good results on substrates with non-activated N-aryl groups such as 1a, while substrate 1b bearing an additional electron-donating group on the N-aryl fragment gave a poorer outcome under similar settings (Scheme 1a). Consequently, several catalytic methods were developed to extend the scope of this Friedel–Crafts process to substrates such as 1c and 1d featuring highly electron-rich N-aryl moieties (Scheme 1b) [42-44]. Finally, following the success of the above procedures, two asymmetric versions were designed to provide access to axially chiral 2-quinolone-based heterobiaryls such as 2e (Scheme 1c) [45,46].

One substantial drawbacks of the previous methodologies is that they do lack an exploration of the substituent diversity on the nitrogen atom. We decided to address this issue by employing propargylamides 7 obtained by a four-component Ugi reaction of propiolic acids 3, aldehydes 4, isocyanides 5 and 3,5-dimethoxyaniline (6a) (Scheme 2). We anticipated that the resulting adducts 7 would readily produce 2-quinolones 8 bearing a branched substituent on the nitrogen atom through an intramolecular gold-catalyzed alkyne hydroarylation reaction (Scheme 2). It should be noted, that heterocyclic syntheses through post-Ugi transformations have been under extensive exploration for the last two decades [47-49], especially in terms of gold-catalyzed Friedel–Crafts-type cyclizations involving attack of electron-rich arenes on the triple bonds, leading to the formation of a great number of fused [50-53] and spirocyclic structures [54-59]. In addition, Ugi adducts have already been successfully utilized for the diversity-oriented synthesis of 2-quinolones using either intramolecular Heck reaction [60] or Knoevenagel condensation [61,62].

We began our study with the preparation of the model substrate 7a through the Ugi reaction of tetrolic acid (3a), benzaldehyde (4a), tert-butyl isocyanide (5a) and 3,5-dimethoxyaniline (6a). Next, the cycloisomerization of 7a was investigated in order to identify the optimal conditions. At first, we attempted two reactions using 5 mol % of the standard AuPPh3Cl/AgOTf precatalytic combination in conventional chlorinated solvents such as deuterated chloroform and dichloromethane (Table 1, entries 1 and 2). The latter proved to be a better choice affording the targeted 2-quinolone 8a in up to 90% yield (Tabel 1, entry 2). Using AgOTf in the absence of gold slowed down the reaction leading to decreased yields of 8a even at an elevated temperature of 60 °C (Table 1, entries 3–5). Conducting the AuPPh3Cl/AgOTf-catalyzed reaction in trifluoroethanol (TFE) led to improved results producing 8a in up to 97% yield (Table 1, entry 6). Thus, this greener alternative [63] to chlorinated solvents was selected as the solvent of choice for the further exploration. Changing the silver counterpart to AgPF6 did not affect the reaction outcome yielding 8a in 96% (Table 1, entry 7). Using AgOTf or AuPPh3Cl as sole catalyst did not provide satisfactory results (Table 1, entries 8–10). In particular, the AgOTf-catalyzed reaction conducted at 60 °C produced substantial amounts of trifluoroethanol adduct 9a (Table 1, entry 8), while the AuPPh3Cl-catalyzed reaction suffered from a slow conversion rate of starting 7a (Table 1, entries 9 and 10).

aReaction conditions: 7a (0.2 mmol), solvent (2 mL), under air. bDetermined by 1H NMR using 3,4,5-trimethoxybenzaldehyde as an internal standard. cThe first portion of catalyst was added at the beginning of reaction, while the second portion was added after 3 h. dIsolated yield for a 0.5 mmol scale reaction is given in parenthesis.

Next, we attempted to delineate the scope of our methodology (Figure 1). Exploring different 3-substituted propiolic acids 3 in combination with 4a, 5a and 6a gave moderate results for the Ugi reaction and good to excellent efficiency for the gold-catalyzed cyclization (Figure 1, products 8a–c). As for the aldehyde component 4, both (hetero)aromatic and aliphatic ones were found to be tolerable (Figure 1, products 8d–k), although for the electron-deficient aromatic aldehydes only low yields were achieved during the Ugi step. Yet, the subsequent gold-catalyzed cyclization worked well delivering the 2-quinolones 8f–h in up to 93% yield. Besides, several aliphatic and aromatic isocyanates 5 have been successfully employed for the preparation of 2-quinolones 8l–n. Finally, we decided to investigate the reactions of Ugi adducts 7o–r derived from various electron-rich anilines 6. The gold-catalyzed cyclization of 3,4,5-trimethoxyaniline-derived substrate 7o proceeded at the elevated temperature of 50 °C producing 2-quinolone 8o in 89% yield. The cyclizations of 7p–r required further optimization of the reaction conditions (Tables 2–4) and were complicated due the formation of regioisomeric products. After all, 2-quinolones 8p and 8q were isolated in good yields from gold-catalyzed reactions in hexafluoroisopropanol (HFIP), while 2-quinolone 8r was obtained as a mixture with isomer 8r’.

As noted above, the intramolecular alkyne hydroarylations with certain Ugi adducts required further adjustment of the reaction conditions. For example, the reaction of substrate 7p being conducted in TFE at room temperature delivered a complex mixture of regioisomeric 2-quinolones 8p/8p’ and TFE-adduct 9b (Table 2, entry 1). However, the application of branched fluorinated alcohols as solvent solved the problem of the competing alkoxylation reaction. Thus, no alcohol adducts were formed when the gold-catalyzed cyclization of 7p was conducted in hexafluoro-2-methylpropan-2-ol or HFIP (Table 2, entries 2–4). Using the latter solvent a full conversion of 7p was achieved at 50 °C within 20 h, allowing to isolate both possible products 8p and 8p’ in 58% and 15% yields, respectively (Table 2, entry 4). It should also be stressed, that reacting 7p in chloroform at rt failed to produce any traces of cyclized products (Table 2, entry 5).

A 4-bromo-3-methoxyaniline-derived Ugi adduct 7q proved to be the most difficult substrate. The initial attempts to perform an intramolecular alkyne hydroarylation of 7q in TFE were characterized by a rather slow reaction rate which concomitantly promoted the competing alkoxylation reaction (Table 3, entries 1 and 2). Consequently, we were able to isolate and characterize the corresponding TFE-adduct 9c (Table 3, entry 2). Switching to HFIP as the solvent prevented the alkoxylation but led to an even slower reaction rate (Table 3, entries 3–5). Increasing the catalyst loading to 10 and finally up to 20 mol % allowed to achieve a full conversion of 7q within 30 h producing 2-quinolone 8q in 75% isolated yield (Table 3, entries 5 and 6).

Analogously to 7p and 7q, the cyclization of 3-methoxyaniline-derived substrate 7r being conducted in TFE did not lead to a full conversion within 12 h at rt (Table 4, entry 1). Switching to branched fluorinated solvents led to a faster conversion of 7r simultaneously suppressing the competing alkoxylation (Table 4, entries 2–4). Nonetheless, the transformation of 7r was further complicated by the fact that the resulting cyclized products 8r and 8r’ were essentially inseparable. The best 8r/8r’ ratio could be obtained using hexafluoro-2-methylpropan-2-ol while the best overall yield was obtained using HFIP (Table 4, entry 2 versus entry 4).

We have elaborated a fast and diversity-oriented approach towards 2-quinolones bearing a branched substituent on the nitrogen atom. The strategy relies on the application of a four-component Ugi reaction followed by a gold-catalyzed intramolecular alkyne hydroarylation. The developed process has a broad scope and simple reaction settings. Another important highlight of the developed process is that it strongly benefits from the employment of fluorinated alcohols as environmentally benign solvents.

© 2018 Du et al.; licensee Beilstein-Institut.
This is an Open Access article under the terms of the Creative Commons Attribution License (http://creativecommons.org/licenses/by/4.0). Please note that the reuse, redistribution and reproduction in particular requires that the authors and source are credited.
The license is subject to the Beilstein Journal of Organic Chemistry terms and conditions: (https://www.beilstein-journals.org/bjoc) 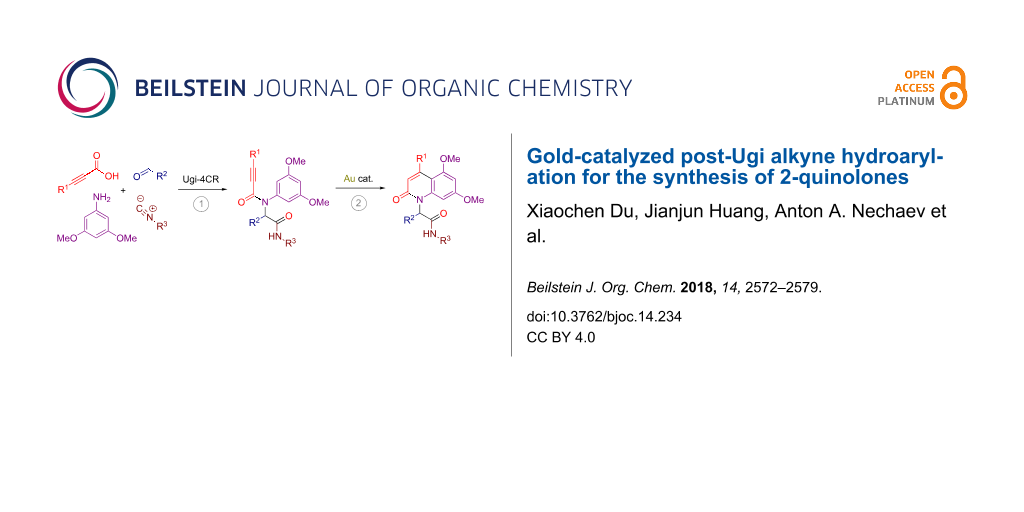