All articles from this author
Daniela H. de Oliveira


All articles from this author
Maria R. B. Pontel


All articles from this author
Jean C. Kazmierczak


All articles from this author
Roberta Cargnelutti


All articles from this author
Diego Alves


All articles from this author
Raquel G. Jacob


All articles from this author
Ricardo F. Schumacher

A one-pot iodine-catalyzed multicomponent reaction has been developed for the selective preparation of 5-amino-4-(arylselanyl)-1H-pyrazoles from a diverse array of benzoylacetonitriles, arylhydrazines and diaryl diselenides. The reactions were conducted in MeCN as solvent at reflux temperature under air. The methodology presents a large functional group tolerance to electron-deficient, electron-rich, and bulky substituents and gave the expected products in good to excellent yields. The synthesized 1,3-diphenyl-4-(phenylselanyl)-1H-pyrazol-5-amine was submitted to an oxidative dehydrogenative coupling to produce a diazo compound confirmed by X-ray analysis.

Selenium-containing compounds are of great importance in bioactive compounds, pharmaceuticals, and as chemical intermediates for organic and inorganic synthesis [1,2]. As a consequence, the development of efficient and practical methods for C–Se bond formation is still a promising field of research in organic chemistry. Despite the several number of methodologies describing the transition metal-catalyzed cross-coupling reaction of diorganyl diselenides with (hetero)aryl, alkenyl, and alkynyl halides or pseudo-halides [3], an updated protocol that describe reduced waste generation and atom-economy is desired. In this context, the multicomponent cyclization/direct selanylation is a practical and economical way to incorporate organylselanyl moieties in aryl and heteroaryl compounds avoiding the necessity of pre-functionalization, multistep synthesis and tedious work-up [4,5]. In this context, the preparation of diverse selanylated indoles and imidazopyridines, for example, is widely found in literature [6,7]. However, the preparation of 4-arylselanyl-1H-pyrazoles is quite scarce. Tiecco and co-workers described the preparation of phenylseleno substituted pyrazolidines by reacting allylhydrazines with phenylselanenyl sulfate generated in situ (Scheme 1) [8]. Attanasi and co-workers described the synthesis of 4-(phenylseleno)pyrazol-3-ones through α-(phenylseleno)hydrazone reagents under basic conditions [9]. In 2015, Yu and co-workers described one example for the condensation reaction of α-oxo ketene dithioacetal with hydrazine hydrate to produce the 3-methyl-5-methylsulfanyl-4-phenylselanyl-1H-pyrazole [10]. Our research group described the multicomponent synthesis of 3,5-dimethyl-4-arylselanyl-1H-pyrazoles catalyzed by copper iodide using DMSO as solvent [4]. More recently, Zora and co-workers reported the one-pot preparation of 4-phenylselanyl-1H-pyrazoles through reaction of α,β-alkynic hydrazones with phenylselenyl chloride [11].

In this context, pyrazoles are one of the most important N-heterocycles found in natural products including formycin, pyrazofurin and withasomnine, for example. Still, pyrazole unities are present in several commercially available drugs such as celecoxib, lonazolac, rimonabant and sildenafil [12,13]. In special, 5-amino-1H-pyrazoles are valuable compounds that present several biological and pharmaceutical activities including antiviral, anticancer, antituberculosis, anti-inflammatory, antifungal and antidepressive activity [14-17]. Moreover, they have been extensively used as synthons to prepare a wide variety of fused N-heterocycles of synthetic and pharmacological importance [18-20]. Thus, an effective strategy for the design and the preparation of new pharmacologically promising drugs that combine at least two bioactive moieties in one molecule avoiding residual metal in transition-metal catalysis in environmental benign conditions is desired. Recently, Sun and co-workers described their interesting results on the I2-catalyzed efficient synthesis of 5-amino-4-sulfanylpyrazoles using diverse β-ketonitriles, arylhydrazines and aryl sulfonyl hydrazides as sulfur source [21]. The chemistry of iodine-catalyzed transformations has emerged as a greener, efficient and economical alternative to transition metals in organic synthesis [22-24]. However, the synthesis of selenium-containing 5-aminopyrazoles under iodine-catalyzed three-component reaction was not described so far.

In view of this, we present a direct and selective multicomponent strategy to synthesize 5-amino-4-(arylselanyl)-1H-pyrazoles 4 by reacting benzoylacetonitrile derivatives 1, arylhydrazines 2 and diorganyl diselenides 3 (Scheme 2). The reaction is catalysed by molecular iodine in MeCN as solvent.

Initially, to optimize the reaction conditions experiments were performed using benzoylacetonitrile (1a), phenylhydrazine (2a) and diphenyl diselenide (3a) as standard substrates to define the best reaction conditions. During the experiments different parameters were evaluated such as temperature, reaction time, solvent, reagent amount and heating method (conventional heating or ultrasound, Table 1).

In a first experiment, benzoylacetonitrile (1a, 0.5 mmol), phenylhydrazine (2a, 0.5 mmol) and diphenyl diselenide (3a, 0.5 mmol) were solubilized in MeCN (3 mL) and molecular iodine (50 mol %) was added. The mixture was stirred at reflux temperature and after 48 h under these conditions, the expected product 4a was obtained in 71% yield (Table 1, entry 1). With these result, we attempted to investigate the parameters regarding quantities (Table 1, entries 2 and 3). Based on it, we observed that the use of a minimum amount of diphenyl diselenide (3a) caused a decrease in the reaction yield, giving the product 4a in 54% (Table 1, entry 2). However, when the reaction was performed using a slight excess of 2a (0.7 mmol) and 3a (0.5 mmol) the reaction yield increased significantly to 96% (Table 1, entry 3). The treatment of 1a, 2a and 3a in the presence of 25, 50 and 75 mol % of molecular iodine afforded the expected product 4a in 68, 96 and 75% yield, respectively (Table 1, entries 3–5). In this sense, better results were obtained when using 50 mol % of I2.

aReaction was performed using 1a (0.5 mmol), 2a and 3a in 3 mL of solvent followed by the addition of molecular iodine. The consumption of starting materials was followed by TLC. bYields are given for isolated products. cThe reaction was carried under ultrasound conditions operating at amplitude of 60% and a frequency of 20 kHz.

With the establishment of the best reaction conditions for the synthesis of 4a described in Table 1, entry 3, we envisaged extending this methodology to diverse benzoylacetonitriles 1a–f, arylhydrazines 2a–f and differently substituted diaryl diselenides 3a–f. In general, as shown in Table 2, most of the reactions proceeded smoothly and provided the desired products in moderate to excellent yields (see Supporting Information File 1 for full experimental data).

The substrate scope of this reaction was investigated under the optimized reaction conditions. Initially, to achieve this goal, we carried out a reaction of phenylhydrazine (2a) and diphenyl diselenide (3a) with benzoylacetonitrile 1b containing an electron-donating group on the aromatic ring, that provided the corresponding product 4b gently in 73% yield. When we performed the reaction by using the benzoylacetonitrile derivative 1c substituted with a methoxy group, a lower isolated yield was observed (Table 2, entry 3). This may be associated with the high reactivity of 1c which produced many byproducts as observed by TLC and GC–MS analysis. Benzoylacetonitriles 1d,e substituted with electron-withdrawing groups such as Br and Cl were also tested and afforded the corresponding products 4d and 4e in good yields (Table 2, entries 4 and 5). However, when we used an ortho-chloro substituted benzoylacetonitrile 1f, the corresponding product 4f was isolated as a non-separable mixture with the non-selenylated 5-aminopyrazole (Table 2, entry 6).

To gain insight into the mechanistic profile we also evaluated whether 5-amino-1H-pyrazole 5a could produce 5-amino-4-(phenylselanyl)-1H-pyrazole 4a via direct C–H bond selanylation reaction catalyzed by iodine. Thus, when 5a reacted with diphenyl diselenide (3a) in the presence of 50 mol % of I2 in acetonitrile as solvent and under reflux, the desired product 4a could be obtained in 90% yield as depicted in Scheme 3.

On the basis of previous reports [21,25] a mechanism can be proposed for this reaction as depicted in Scheme 4. Initially, we believe that arylhydrazine 2 reacts with benzoylacetonitrile 1 by a 1,2-addition reaction in the presence of iodine as Lewis acid to generate the hydrazone intermediate A. Then, hydrazone A undergoes a cyclization reaction followed by an oxidative aromatization to yield 1H-pyrazol-5-amine 5. At the same time, the diaryl diselenide 3 reacts with the molecular iodine to generate an electrophilic selenium species B. The following step is the nucleophilic attack of the electron-rich pyrazole 5 to species B to afford product 4 after releases a proton and produce HI. The presence of oxygen into the reaction system is expected to regenerate the iodine to continue the catalytic cycle.

To verify the synthetic application of 5-amino-4-(arylselanyl)-1H-pirazoles 4, we selected compound 4a to prepare a new diazopyrazole derivative 6 based on the methodology described by Jiang and co-workers [26]. In this context, by reacting the 4-(phenylselanyl)pyrazol-5-amine 4a with CuI (5 mol %), 1,10-phenantroline (15 mol %) and tert-butyl hydroperoxide in dichloromethane at room temperature for 2 h, the respective diazo aromatic compound 6 could be obtained in 50% yield (Scheme 5). As can be seen, the reaction proceeded smoothly allowing formation of the new N=N bond without cleavage of the C–Se bond under the oxidant media and the presence of copper salt.

A variety of 4-(arylselanyl)-1H-pyrazol-5-amines was prepared in a one-pot multicomponent procedure starting from easily available benzoylacetonitriles, arylhydrazines and diaryl diselenides. Molecular iodine (50 mol %) was employed to promote this reaction in MeCN under reflux temperature and afforded the expected products in a range of 24% to 96% yield after 48 hours. Finally, the obtained 4-(phenylselanyl)-1H-pyrazol-5-amine proved to be a promising starting material for synthesizing new diazo compounds with higher added value. The protocol described here can be considered a valuable tool for the advance of the synthesis and pharmacological studies of selenium-containing pyrazoles and derivatives.

The Supporting Information features full experimental data and copies of 1H and 13C NMR spectra of pyrazoles 4 and 6.

© 2018 Pires et al.; licensee Beilstein-Institut.
This is an Open Access article under the terms of the Creative Commons Attribution License (http://creativecommons.org/licenses/by/4.0). Please note that the reuse, redistribution and reproduction in particular requires that the authors and source are credited.
The license is subject to the Beilstein Journal of Organic Chemistry terms and conditions: (https://www.beilstein-journals.org/bjoc) 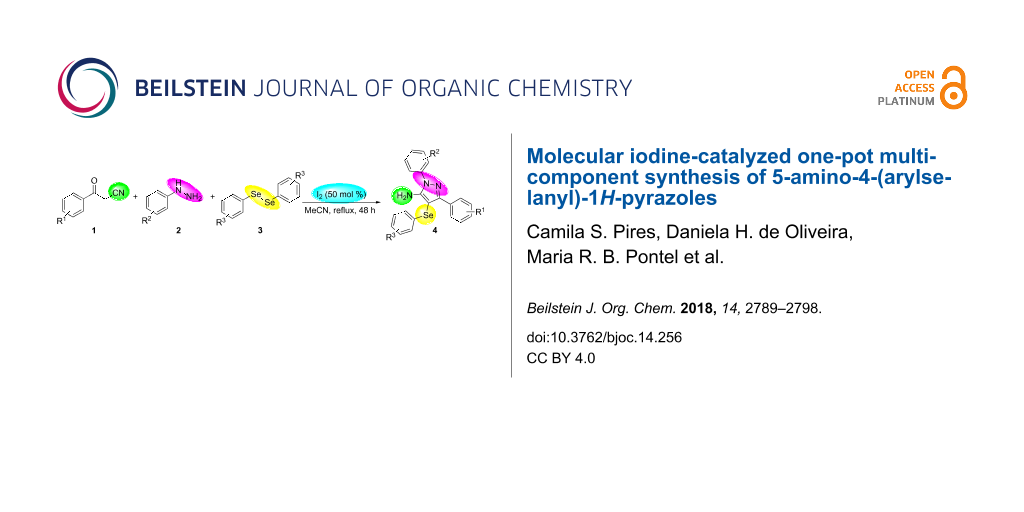