All articles from this author
Jamil Kraїem


All articles from this author
Sylvain Marque


All articles from this author
Yakdhane Kacem


All articles from this author
Béchir Ben Hassine

New chiral 1-(arylamino)imidazo[2,1-a]isoindole-2,5-dione derivatives were obtained in good to excellent yields via the cyclocondensation of 2-formylbenzoic acid and various α-amino acid arylhydrazides using water as the solvent in the presence of sodium dodecyl sulfate as the surfactant and under simple and minimum manipulation, without purification. The reaction is totally diastereoselective and gives access to the nitrogenated tricyclic core with a relative trans stereochemistry.

Also, the imidazo[2,1-a]isoindole-2,5-dione derivatives of primaquin have been synthesized from α-amino acids [14]. Focusing on the 1H-imidazo[2,1-a]isoindolone skeleton, Hosseini-Zare et al. reported the synthesis of new 2,3-diaryl-5H-imidazo[2,1-a]isoindol-5-ones via the one pot reaction of 1,2-diketones, 2-formylbenzoic acid and ammonium acetate [15]. These methodologies usually use toxic solvents such as benzene [16], dichloromethane and some catalyst such as para-toluenesulfonic acid [17]. Furthermore, most of them induce to manage undesirable waste produced in stoichiometric amounts. Recently, such synthetic methods utilizing hazardous solvents and reagents and generating toxic waste have become discouraged and there have been many efforts to develop safer and environmentally benign alternatives. The green chemistry concept emerged in 1990 [18] with the aim at developing cleaner approaches through the simplification of chemical processing along with the decreases of waste and cost. As a part of our ongoing efforts directed toward the development of environmentally safe conditions for the synthesis of heterocyclic compounds starting from natural (L)-α-amino acids [19-23] and the reactivity of α-amino acid phenylhydrazides [24,25], we now report a green and eco-friendly procedure for the synthesis of new chiral 1-(arylamino)-1H-imidazo[2,1-a]isoindole-2,5(3H,9bH)-diones (Scheme 1).

aYield of the isolated product. bThe compound 3d was obtained as a racemic mixture.

Verardo et al. [29] have shown that refluxing α-amino acid phenylhydrazides with levulinic acid in toluene led to the corresponding dihydro-1H-pyrrolo[1,2-a]imidazole-2,5-diones. These authors explained clearly the behavior of the solvent and its influence in the reaction. In addition, substituted 1-hydroxy-1H-imidazo[2,1-a]isoindole-2,5(3H,9bH)-diones have been synthesized by the condensation of (L)-α-aminohydroxamic acids and 2-formylbenzoic acid under the same conditions [30]. Thus, they choose toluene as the best solvent for this reaction. To prepare the new chiral 1-(arylamino)imidazo[2,1-a]isoindole-2,5-diones 5a–m under greener conditions, we investigated the reaction in nontoxic solvents such as water and dimethyl carbonate (DMC). Indeed, DMC is well-known as safe reagent and solvent that has been used for many green applications [31-33]. On the other hand, water is a simply and environmentally benign solvent and interest has increasingly turned to it as the greenest solvent of chemical reactions [34]. In order to find the best reaction conditions, a model reaction was chosen using (L)-alanine phenylhydrazide (3a, Scheme 3), and the results of these optimized studies were summarized in Table 2.

The best result was obtained when a mixture of hydrazide 3a and formylbenzoic acid 4 was heated at 120 °C (oil bath) using water as the solvent in the presence of SDS (10%) as the surfactant for 10 h leading to a 90% yield in 5a. To demonstrate the generality of this method, we next investigated the scope of this reaction under the optimized conditions. A variety of the 1-(arylamino)imidazo[2,1-a]isoindole-2,5-diones 5b–m were prepared and the obtained results are summarized in Scheme 4. The mild conditions of the reaction gave access to the tricyclic compounds 5a–m providing similar yields, regardless the amino acid residue is. A weak acidic function was well-tolerated yielding 5j with 66%. Bulky groups did not roughly affect the efficiency of the reactivity (5b, 5c).

The new approach described in this work for the preparation of compounds 5a–m has the following advantages: (i) notably, under the reaction conditions described above, we have never observed the formation of degradation products. (ii) The reaction was performed in water, in the presence of SDS (sodium dodecyl sulfate) as the surfactant. Based on previous studies [35], the most effective method for ensuring the solubility of reactants in water is the use of surfactants that can form micelles with a hydrophobic core and a hydrophilic corona. (iii) This clean method afforded compounds 5a–m without the need of additional purification such as column chromatography or recrystallization. (iv) The use of a sealed tube [36-43] obeys to four out of the twelve green chemistry principles: a cleaner and eco-friendly reaction profile with minimum of waste, solvent without negative environmental impact, shorter reaction time and safely work with a pressure tube canning prevent fires and emissions of hazardous compounds and toxic gas. (v) The reaction described in this work occurred with high atom efficiency (atom economy of 90%) and produced only stoichiometric H2O as waste (E-factor of 0.1).

In addition, various crystallization tests were carried out in order to confirm the absolute stereochemistry by X-ray diffraction. The chiral 3-(2-(methylthio)ethyl)-1-(phenylamino)-1H-imidazo[2,1-a]isoindole-2,5(3H,9bH)dione (5f) crystallized [44-49] using a mixture of CH2Cl2/diethyl ether (3:1) as a single diastereoisomer with the (3S,9R) configuration (Figure 3) showing clearly the trans relative stereochemistry.

Analyzing the mechanism of the reaction between the 2-formylbenzoic acid 4 and α-amino acid arylhydrazides 3, we assumed that the first steps lead to the formation of the imine intermediate A, which is the result of the nucleophile addition of the α-amino group on the most electrophilic center in 4. This imino-carboxylic acid form likely evolves to its iminium-carboxylate form B [50]. This last intermediate involves the existence of two possible transition states for the cyclization of the imidazolidinone core of which one of them is favored by an intramolecular hydrogen bond (Scheme 5). This control is the main difference with the known reaction [51] between the hydrazides 3 and the phthalaldehydes in which two diasteroisomers have been observed. If the amino acid residue (R on the Scheme 5) enough implicates steric hindrance with the carboxyaromatic part of B, the pathway with disfavored transition state becomes unlikely and then the selectivity is important. Our model is in agreement with the diasteroisomeric ratio results. In fact, a total diastereoselectivity was observed, including 5d (R = Ph) since an epimerization of the initial asymmetric center was observed, therefore racemic trans-isomers were obtained in this case. Interestingly, acidic (phenolic 5j) and basic moieties (as indolyl 5i) on the amino acid residue did not affect the selectivity.

In summary, we have developed environmentally safe conditions for the synthesis of new chiral 1-(arylamino)-1H-imidazo[2,1-a]isoindole-2,5(3H,9bH)-diones in good yields using water as the solvent in sealed tube. The aspects of greenness and good results make this methodology a practical and atom economical alternative in the whole of the processing since the syntheses of the α-amino acid arylhydrazide precursors behave this greener aspect. Once more, the processing includes this eco-friendly way up to have the compounds in hand since simple precipitation allows to isolate the nitrogenated tricyclic compounds; no purification is needed. The model for the key step of the cyclization clearly explains the stereochemistries, which are observed with a total trans-diastereoselectivity controlled by intramolecular hydrogen bonds.

The authors thank the DGRST (Direction Générale de la Recherche Scientifique et Technologique) of the Tunisian Ministry of Higher Education and Scientific research and Technology for financial support of this research.

© 2018 Bouzayani et al.; licensee Beilstein-Institut.
This is an Open Access article under the terms of the Creative Commons Attribution License (http://creativecommons.org/licenses/by/4.0). Please note that the reuse, redistribution and reproduction in particular requires that the authors and source are credited.
The license is subject to the Beilstein Journal of Organic Chemistry terms and conditions: (https://www.beilstein-journals.org/bjoc) 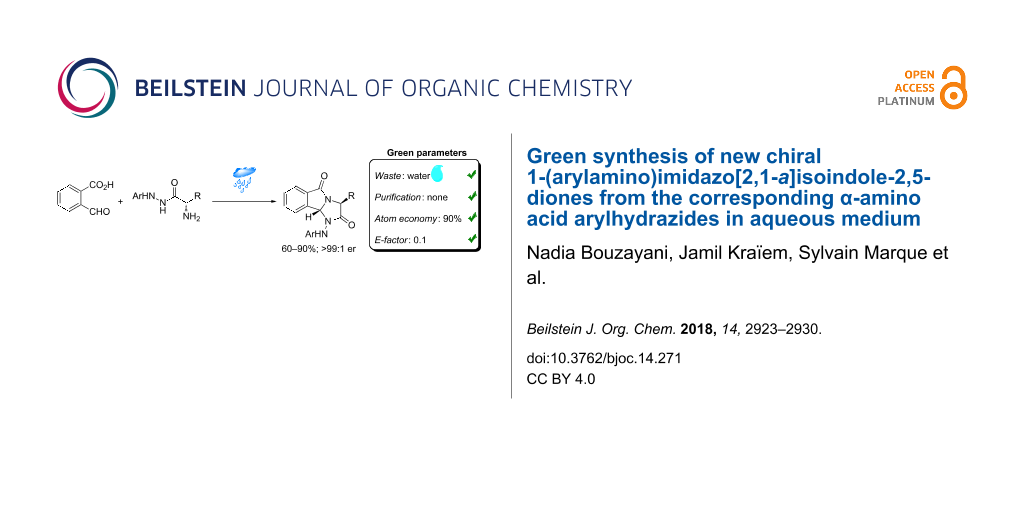