All articles from this author
Pavel Postnikov

Diaryliodonium salts, which are also known as diaryl-λ3-iodanes, are widely considered to be an important and practically useful class of hypervalent iodine compounds [1-4]. Diaryliodonium salts have found broad synthetic application as electrophilic arylating reagents in reactions with various nucleophiles including electron-rich carbon-centered species [5-7]. The unique arylating reactivity of diaryliodonium salts has been demonstrated in many metal-catalyzed and also metal-free transformations [8-15].

The development of novel synthetic approaches to diaryliodonium salts based on the use of inexpensive, commercially available oxidants is an important and challenging goal. A vast majority of existing procedures involve the interaction of electrophilic hypervalent iodine(III) species with suitable arenes through ligand exchange processes [16-20]. The reactive hypervalent iodine(III) species can be used as stable reagents or can be generated in situ [21-25]. In particular, Olofsson and co-workers reported procedures based on the in situ generation of reactive λ3-iodane species directly from arenes, which was a significant achievement in this field [26-29]. However, these now well-established processes involve oxidations using mCPBA in the presence of strong organic acids [30-35]. Therefore, the development of new, convenient and inexpensive methods utilizing readily available and easy-to-handle oxidants still remains a highly desirable goal.

Previously, we have published the utilization of Oxone® (2KHSO5·KHSO4·K2SO4) as a readily available and effective oxidant for the preparation of various hypervalent iodine compounds [36-42]. Oxone is used as an efficient oxidant for the direct conversion of substituted 2-iodobenzoic acids to arylbenziodoxoles [37,38], 2-iodobiphenyl to dibenziodolium compounds [39], iodoarenes to iodylbenzenes and [bis(trifluoroacetoxy)iodo]arenes [40,41], and for the preparation of diaryliodonium trifluoroacetates and triflates [42]. Yakura also used Oxone® as an oxidant for the generation of iodine(III) species in the oxidation of phenols [43]. In the present work, we report the development of a reliable and convenient procedure for the preparation of diaryliodonium bromides using Oxone in the presence of sulfuric acid.

With electron-deficient arenes 2 such as chlorobenzene (2e) and benzene, an excess of sulfuric acid and arene was used to improve the yields. Subsequently it was shown that the addition of aqueous potassium bromide can be modified and other counter anions can be introduced to prepare different diaryliodonium salts. This has been demonstrated in the preparation of diaryliodonium salts using 1-iodo-3-trifluoromethylbenzene (1b) and mesitylene (2d) as model substrates (Table 3).

The yield of the salts 3h and 3p–s do not depend on the nature of the anion and its source. Small differences in yield can be explained by different solubility of salts in acetonitrile/water. Diaryliodonium bromides were isolated in higher yields because of the low solubility of these products (Table 3).

This procedure allowed the synthesis of iodonium salts with arenes containing electron-donating groups. Unfortunately, electron-poor arenes exhibited a lower reactivity and bis-(4-chlorophenyl)iodonium bromide have been isolated in only 40% yield. Nevertheless, the developed procedure is characterized by important advantages, such as simplicity, the use of inexpensive and available reagents, and typically good yields of iodonium salts. It is a versatile addition to the methodology toolbox for the preparation of diaryliodonium salts.

In conclusion, a new facile protocol for the preparation of diaryliodonium salts using cheap and readily available Oxone as an oxidant in the presence of sulfuric acid has been developed. The procedure allows the synthesis of a wide range of iodonium salts containing electron-donating and electron-withdrawing substituents. Particularly attractive is the possibility of the one-pot synthesis of symmetric bis-aryliodonium salts directly from arenes via an iodination–oxidation sequence.

© 2018 Soldatova et al.; licensee Beilstein-Institut.
This is an Open Access article under the terms of the Creative Commons Attribution License (http://creativecommons.org/licenses/by/4.0), which permits unrestricted use, distribution, and reproduction in any medium, provided the original work is properly cited.
The license is subject to the Beilstein Journal of Organic Chemistry terms and conditions: (https://www.beilstein-journals.org/bjoc) 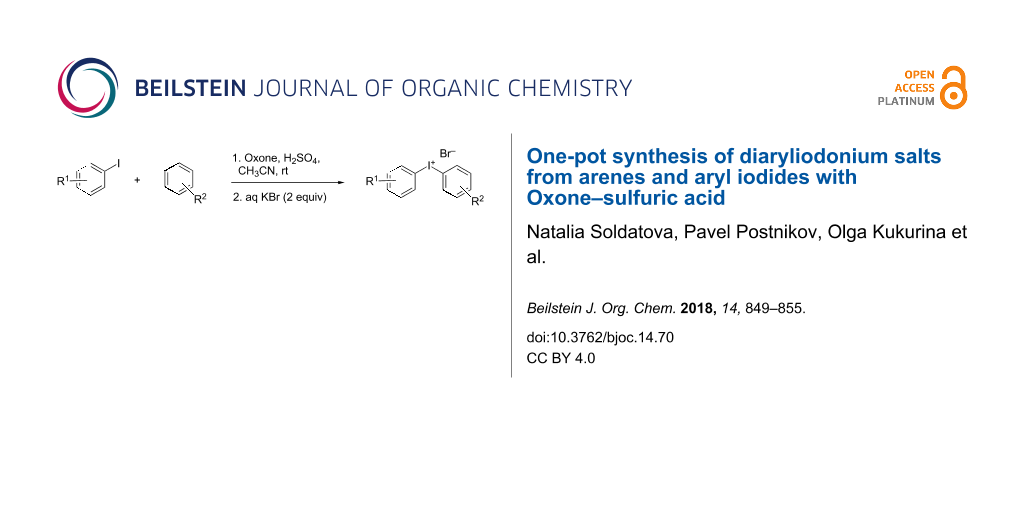