All articles from this author
David Sucunza

A series of BN-phenanthrenes with substituents of a diverse nature have been synthesized by palladium-catalyzed cross-coupling reactions of a common chloro-substituted precursor, which was made from readily available materials in only four steps. Evaluation of the photophysical properties of the prepared compounds unveiled an impressive effect of the presence of alkynyl substituents on the fluorescence quantum yield, which improved from 0.01 in the parent compound to up to 0.65 in derivatives containing a triple bond.

BN-polycyclic aromatic hydrocarbons (BN-PAHs) have received increasing interest over the past few years [1-5], particularly in the field of materials science [6]. The presence of a polarized B–N bond induces significant changes in the photophysical properties of these compounds when compared to their PAH analogues containing only non-polar C=C bonds. This fact opens up new opportunities for creating improved optoelectronic devices [7-15].

The introduction of substituents is known to have a substantial influence on the photophysical properties of PAHs. However, although some particular examples of the impact of substituents on the behaviour of BN-PAHs have been reported [16-21], systematic studies are not usually performed, probably due to the difficulties associated with their synthesis and the lack of general methods for their functionalization [22].

We have recently designed an efficient synthesis for one of the simplest BN-PAHs, namely BN-phenanthrene 1a [23]. We are interested in evaluating the reactivity [24] and properties of 1a in greater detail as this could provide valuable information that leads to a better understanding of the behaviour of BN-aromatics. Interestingly, 1a turned out to be weakly fluorescent [23], in contrast to other BN-phenanthrene isomers described previously [25,26]. The presence of aryl or amino substituents at C1, which can be introduced via bromination and subsequent palladium-catalyzed cross coupling, does not have a significant impact on the fluorescence of these compounds (Figure 1) [23]. In order to gain a deeper understanding of the photophysical properties of the BN-phenanthrene core, we decided to evaluate the influence of substituents located in other positions. We were particularly interested in the effect of alkynyl substituents, as their presence in PAHs is known to alter the fluorescence properties thereof markedly [27-29]. In this regard, we have recently described a methodology for the synthesis of a chloro-substituted BN-benzo[c]phenanthrene and its subsequent derivatization via palladium-catalyzed cross-coupling reactions [30], and we envisioned that this reaction could be used to prepare C7 substituted BN-phenanthrenes (Figure 1).

Herein we report the synthesis of chloro-substituted BN-phenanthrene 1b, its derivatization via palladium-catalyzed cross-coupling reactions and the significant effect of the substituents on the fluorescence properties of the compounds prepared.

Our first aim was to synthesise the Cl-substituted BN-phenanthrene 1b (Scheme 1), following a synthetic sequence analogous to that described previously by us for preparation of the parent BN-phenanthrene 1a [23]. Thus, an initial Buchwald–Hartwig amination between 2-bromo-5-chlorostyrene and 3-butenylamine was the initial step. This coupling was performed at 70 °C, as a higher yield was obtained at this temperature (71% at 80 °C, 24 h vs 82% at 70 °C, 48 h). Substrate 2 was then cyclized with vinyl trifluoroborate. The optimal conditions to obtain 3 were found to be heating at 110 °C for 72 h. Lower temperatures and/or shorter times led to incomplete conversions in the borylative cyclization of 2. Ring-closing metathesis of 3 proceeded efficiently in the presence of 10 mol % of the second-generation Grubbs catalyst to yield dihydro-BN-phenanthrene 4, which was oxidized to 1b under the conditions previously optimized for the synthesis of the parent BN-phenanthrene 1a [23].

Moreover, Sonogashira couplings efficiently proceed to provide alkynyl-substituted BN-phenanthrenes 1e and 1f in excellent yields (Scheme 3). These results confirm the value of palladium-catalyzed cross-coupling reactions of chloro-substituted BN-arenes as a useful tool for the preparation of derivatives functionalized with a range of substituents of a different nature.

Once we had developed a useful method for the synthesis of the functionalized BN-phenanthrenes 1, we focussed on our initial goal of evaluating the influence of different substituents on the photophysical properties thereof. The absorption and emission spectra of the parent BN-phenanthrene 1a and the derivatives prepared in this work are shown in Figure 2. 1-(Phenylethynyl)-4a-aza-10a-boraphenanthrene (5), which was previously prepared in our group by bromination of 1a and subsequent coupling [23], was also included in this comparative study. The absorption and emission data for these compounds are summarized in Table 1, and a picture of their solutions under UV irradiation are shown in Figure 3.

We have successfully prepared a chloro-substituted BN-phenanthrene derivative that serves as a useful intermediate for the synthesis of a range of BN-phenanthrenes substituted with groups of diverse nature at C-7. This efficient post-functionalization methodology allows the influence of substituents on the photophysical properties of the BN-phenanthrene core to be studied. Substituted derivatives show an improved quantum yield with respect to the parent BN-phenanthrene, an effect that is particularly noteworthy for alkynyl substituents. A BN-phenanthrene bearing the triple bond at C-1 shows a similar increase in the quantum yield, thus suggesting that the influence of the alkynyl substituent is not limited to a particular position. We consider that this discovery may have important implications in the discovery of novel BN-arenes with improved properties. Further studies into the effect of alkynyl substituents on the fluorescence of BN-arenes are currently ongoing in our laboratories.

© 2019 Abengózar et al.; licensee Beilstein-Institut.
This is an Open Access article under the terms of the Creative Commons Attribution License (http://creativecommons.org/licenses/by/4.0). Please note that the reuse, redistribution and reproduction in particular requires that the authors and source are credited.
The license is subject to the Beilstein Journal of Organic Chemistry terms and conditions: (https://www.beilstein-journals.org/bjoc) 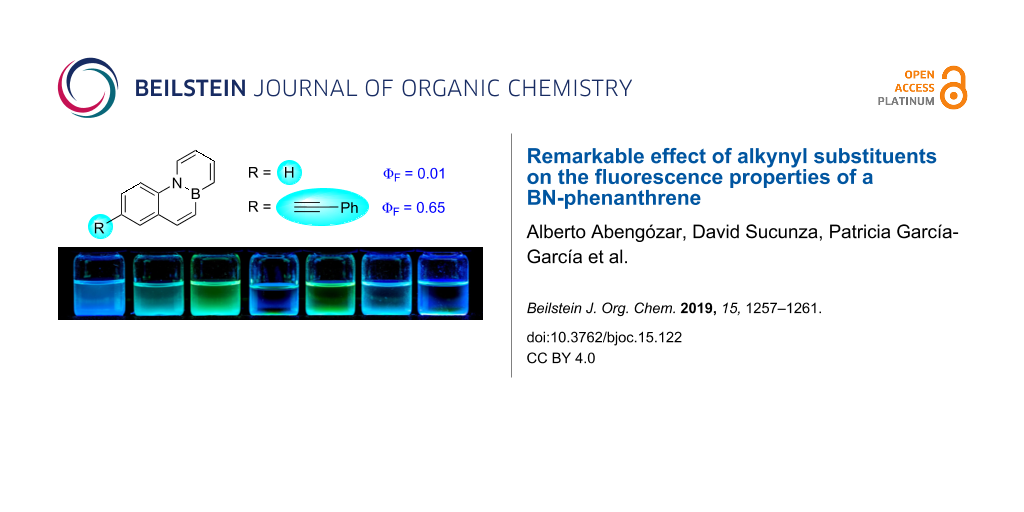