All articles from this author
Cai-ping Liu


All articles from this author
Di Chen


All articles from this author
Long-hai Zhuo


All articles from this author
Huai-tian Bu


All articles from this author
Wei Tian

On the basis of the considerations described above, herein we report on pH-responsive supramolecular self-assemblies by utilizing β-CD-benzimidazole2 (β-CD-BM2) as AB2-type amphiphilic HGCMs for the delivery and controlled release of doxorubicin (DOX). β-CD-BM2 was first synthesized by click reaction (Scheme 1a). β-CD-BM2 formed fan-shaped self-assemblies (FSSAs) at neutral pH through host–guest interactions between β-CD and BM. DOX was used as a model drug encapsulated into FSSAs (Scheme 1a,b). The slow release of DOX from DOX-loaded FSSAs was observed at pH 7.4 (Scheme 1b,c). On the contrary, the release rate of DOX increased evidently when the solution pH value was adjusted to 5.0, accompanied with morphology transitions from FSSAs to spherical self-assemblies (SSAs) due to the pH-induced dissociation of β-CD/BM inclusion complexes (Scheme 1c,d), and the hydrophilic–hydrophobic interaction-induced formation of spherical micelles with BM units as inner hydrophobic core and β-CD moieties as outer hydrophilic shell. The basic cell experiments confirmed that the pH-responsive supramolecular self-assemblies based on β-CD-BM2 have a potential application in the field of drug delivery.

Finally, the targeted monomer β-CD-BM2 was synthesized through the click reaction between β-CD-(N3)2 and excess BM-Alk (Scheme 1a). As can be seen from the FTIR spectrum of β-CD-BM2 in Figure S1A-c (Supporting Information File 1), the absorption peaks of the azido group at 2103 cm−1 and the alkynyl group at 2127 cm−1 disappeared simultaneously. Characteristic signals for β-CD at δ = 3.1–3.9, 4.3–4.9 and 5.6–5.9 and protons of BM at δ = 7.0–8.4 could be observed obviously in the 1H NMR spectrum of β-CD-BM2 (Figure S1B-d, Supporting Information File 1). Furthermore, the molecular weight of β-CD-BM2 (Figure S1C, Supporting Information File 1) measured by high-resolution mass spectrometry was 1497.5266 [M + H+], which was in accordance with the theoretical value of 1496.5236. On the basis of the above results, AB2-type host–guest-conjugated amphiphilic monomer β-CD-BM2 has been successfully synthesized.

The morphology of the self-assembly and the size of β-CD-BM2-based supramolecular self-assemblies under neutral and acidic pH were first investigated by employing transmission electron microscopy (TEM) and dynamic light scattering (DLS). The prepared β-CD-BM2 were dissolved under neutral pH solution to form FSSAs. TEM revealed that these FSSAs had an average diameter (Dav) of 120 nm (Figure 1a,c), which was close to the hydrodynamic diameter (Dh) of 163 nm determined by DLS (Figure 1e). Furthermore, the pH-induced self-assembly morphology transition process were further studied. When the pH value of the FSSAs solution was adjusted to 5.0, SSAs (Figure 1b,d) with a Dav of 40 nm and Dh of 52 nm were formed instead of FSSAs.

On the basis of the abovementioned results, a possible morphology transition mechanism of β-CD-BM2-based supramolecular self-assemblies in different pH solutions was proposed. In neutral aqueous solution, the host–guest interaction between β-CD and BM in β-CD-BM2 were enhanced, and further driven by β-CD-BM2 to form the FSSAs. While the BM could be protonated in the acidic environment [47], so the host–guest interaction of β-CD and protonated BM decreased correspondingly, resulting in a self-assembly morphology transition from fan-shaped to spherical structures. Furthermore, 2D NOESY, UV–vis and fluorescence spectroscopy were employed to confirm the above proposed mechanism. Firstly, the 2D NOESY spectra of solutions of supramolecular self-assemblies further testified the inclusion interaction between β-CD and unprotonated/protonated BM. As shown in Figure 3a, the signals from the BM protons (H protons of the benzene ring) were correlated with the signals of the inner 3-H and 5-H protons of β-CD in neutral aqueous solution, indicating the formation of the host–guest inclusion complexes between the β-CD and the BM moieties. On the contrary, the 2D NOESY spectra of SSAs showed no correlation peak between the signals of the protons of BM and the inner 3-H and 5-H protons of β-CD at pH 5.0 (Figure 3b). Second, the UV–vis results (Figure 3c) showed that the absorption band at λ = 248 nm decreased and the absorption band at λ = 281, 273 nm shifted to 275, 268 nm when the solution pH was changed from 7.5 to 5.0, owing to the protonation of BM inclusion complexes. In addition, the fluorescence spectra indicated that the maximum emission wavelength shifted from 297 nm at pH 7.4 to 370 nm at pH 5.0 (Figure 3d), indicating as well the protonation of BM inclusion complexes. These results further proved that the self-assembly morphology transitions of supramolecular self-assemblies was driven by the pH-induced dissociation of host–guest interactions between BM and β-CD.

β-CD-BM2-based SSAs were used as nanocarriers for drug delivery. Doxorubicin (DOX) was first loaded into FSSAs with a drug-loaded content of 8.2%. To confirm the pH-induced controlled release behavior, a two-stage DOX-release process was conducted at different pH conditions. Release curves of DOX from DOX-loaded FSSAs are shown in Figure 4. The release rate of DOX was suppressed at pH 7.4, and only about 42% of DOX was released within 24 h. In contrast, the release rate of DOX was evidently increased when the solution pH value was changed from 7.4 to 5.0. The cumulative release amounts of DOX correspondingly increased from 42% to 98%. The above result may be attributed to the pH-induced morphology transitions from FSSAs to SSAs on the basis of the dissociation of host–guest interactions between β-CD and BM.

The biocompatibility of drug-free supramolecular self-assemblies is of crucial importance for the further use of these materials as drug carriers. Herein, the biocompatibility of β-CD-BM2-based FSSAs towards PC-3 cells was investigated with different concentrations after incubation for 48 h. The result did not show any cytotoxicity against PC-3 cells (Figure 5a). The viability of PC-3 cells could reach 84% even when the concentration of FSSAs was up to 240 μg/mL, indicating a good biocompatibility. An MTT assay was then conducted to evaluate the potential of supramolecular self-assemblies as intelligent drug release carriers within a biological environment. The cellular toxicity of DOX-loaded FSSAs and free DOX·HCl against PC-3 cells was further investigated. As shown in Figure 5b, DOX-loaded FSSAs displayed reduced cytotoxicity against PC-3 cells in comparison with free DOX·HCl. The in vitro half-maximal inhibitory concentration (IC50) values of DOX-loaded FSSAs and free DOX·HCl after incubation for 48 h were 1.44 and 0.91 μg/mL, respectively. The results further certified that the fast intracellular drug-release process of DOX-loaded FSSAs provided a large intracellular drug dose and high cytotoxicity. All these results suggested that DOX-loaded FSSAs presented a potential application in controlled drug delivery.

© 2019 Bai et al.; licensee Beilstein-Institut.
This is an Open Access article under the terms of the Creative Commons Attribution License (http://creativecommons.org/licenses/by/4.0). Please note that the reuse, redistribution and reproduction in particular requires that the authors and source are credited.
The license is subject to the Beilstein Journal of Organic Chemistry terms and conditions: (https://www.beilstein-journals.org/bjoc) 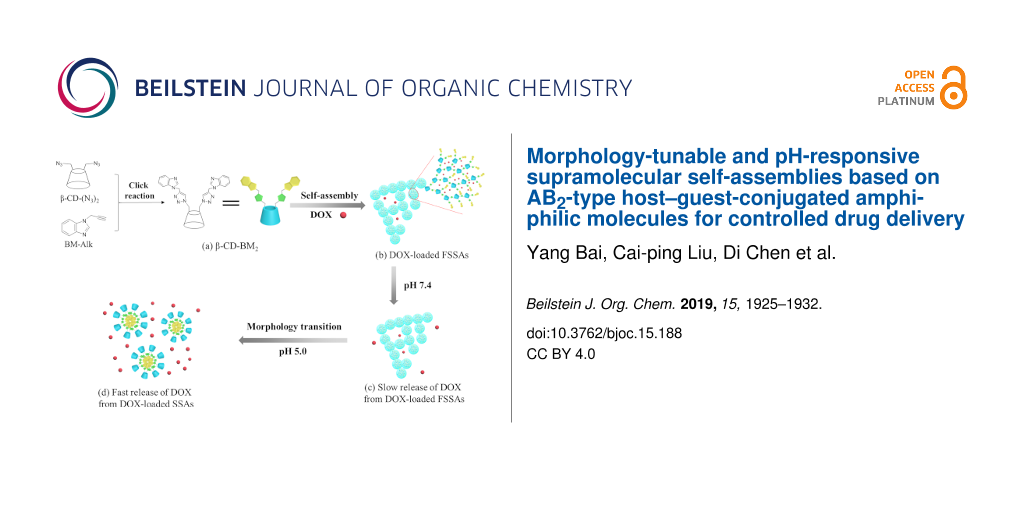