All articles from this author
Yulia A. Vlasenko


All articles from this author
Mekhman S. Yusubov


All articles from this author
Boris J. Nachtsheim

The thermal stability of pseudocyclic and cyclic N-heterocycle-stabilized (hydroxy)aryl- and mesityl(aryl)-λ3-iodanes (NHIs) through thermogravimetric analysis (TGA) and differential scanning calorimetry (DSC) is investigated. Peak decomposition temperatures (Tpeak) were observed within a wide range between 120 and 270 °C. Decomposition enthalpies (ΔHdec) varied from −29.81 to 141.13 kJ/mol. A direct comparison between pseudocyclic and cyclic NHIs revealed high Tpeak but also higher ΔHdec values for the latter ones. NHIs bearing N-heterocycles with a high N/C-ratio such as triazoles show among the lowest Tpeak and the highest ΔHdec values. A comparison of NHIs with known (pseudo)cyclic benziodoxolones is made and we further correlated their thermal stability with reactivity in a model oxygenation.

Hypervalent iodine compounds, in particular aryl-λ3-iodanes, have found wide spread applications as oxidants and electrophilic group transfer reagents in organic synthesis [1-11]. A 3-center 4-electron bond connects the central iodine atom, providing two electrons, with two carbon- or heteroatom ligands L1 and L2, providing one electron each (Figure 1). These ligands can be arranged along the hypervalent iodine atom through an open-chained, a pseudocyclic or a cyclic structure.

One of the ligands gets either substituted during an iodane-mediated transformation or is directly transferred in an electrophilic group-transfer reaction onto a nucleophilic substrate. The other ligand stabilizes the electrophilic hypervalent iodine atom in its ground state or directly influences its reactivity by stabilizing reactive intermediates or transition states. In recent years, a plethora of cyclic and pseudocyclic iodanes have been developed with covalently attached stabilizing ligands L2 and applied in a variety of group-transfer reactions. Prominent examples include ethynyl benziodoxolones (EBX, L1 = alkyne) [12], the Zhdankin reagent azidobenziodoxole (ABX, L1 = N3) [13], cyanobenziodoxole (CBX, L1 = CN) [14] or Togni’s reagent (L1 = CF3) [15]. Even though the transferable ligand (L1) has been varied extensively, the chemical design of the stabilizing donor ligand L2 has not been investigated as intensive. In general, carboxylic acid derivatives, ethers or free alcohols are utilized to stabilize the hypervalent iodine center by an oxygen–iodine bond or through dative oxygen–iodine interactions in (pseudo)cyclic iodanes. Albeit aryl-λ3-iodanes are viewed as safe and stable under ambient temperatures, systematic thermal degradation studies of hypervalent iodine reagents are still rare. In 1992 Varvoglis and co-workers investigated the thermal degradation of a variety of aryl iodine(III) dicarboxylates into alkyl and aryl radicals through thermogravimetry [16,17]. In 2013 Kumar and co-workers compared the thermal properties of open-chained aryl-λ3-iodanes with their polymer bound derivatives and found an endothermic decomposition behavior [18]. In the same year Haller and co-workers investigated the explosive properties of Togni’s reagent and very recently, Williams and co-workers analyzed the sensitivity of common oxidants including 2-iodoxybenzoic acid (IBX) and Dess–Martin periodinane (DMP) [19,20]. Waser and co-workers examined the thermal stability of the Zhdankin reagent ABX and compared it with the amide-stabilized derivative ABZ (azidobenziodazolone). They found a remarkable higher thermal stability of the latter compound by DSC analysis indicated by a higher onset temperature and a lower heat release during decomposition [21]. ABZ is a rare example of a nitrogen-stabilized iodane, showing promising properties in terms of reactivity and stability. However, iodanes stabilized by nitrogen-based ligands, in particular N-heterocycles are still underexplored [22-28]. Recently, our groups investigated systematically cyclic and pseudocyclic N-heterocycle-stabilized iodanes (NHIs). We demonstrated that the N-heterocycle significantly influences the important I–L1 bond length and subsequently has a profound impact on the reactivity of the iodane in oxygen transfer reactions [29,30]. Since the combination of a highly oxidized hypervalent iodine species with N-heterocycles with a high N/C-ratio might result in potential hazardous high energy materials, we herein investigated their thermal stability by thermogravimetric analysis (TGA) and differential scanning calorimetry (DSC).

We started our experiments with the preparation of appropriate λ3-iodanes bearing N- and O-centered ligands according to our reported procedures [29,30]. The synthesized compounds then have been divided in the following discussion by their principle structural features into pseudocyclic and cyclic hydroxy(phenyl)-λ3-iodanes (Figure 2) and pseudocyclic and cyclic mesityl(phenyl)-λ3-iodanes (Figure 6).

A similar decomposition behavior was observed for the other triazole-containing pseudocyclic NHIs 3–5. Introduction of a methyl-substituent at C5 of the triazole 3 was accompanied by an increased decomposition enthalpy (ΔHdec = 125.1 kJ/mol). However, thermal stability as indicated by a higher Tpeak, significantly increased. Methyl substitution at N2 resulted in an even higher Tpeak at 152.4 °C and a decreased decomposition enthalpy. If the triazole is connected to the iodoarene via N1 as in 5, Tpeak decreases and ΔHdec increases. It should be concluded that triazole 4 has the most advantageous decomposition behavior: It is thermally the most stable among the pseudocyclic triazoles with the lowest ΔHdec value. However, even the triazoles 2, 3, and 5 can be considered as safe compounds, but still deserve a common precaution due to the narrow decomposition process.

Pyrazoles 6 and 7 are thermally more stable (Tpeak = 168.9 and 196.5 °C) with a remarkably lower ΔHdec value. NH-pyrazole 6 shows the lowest ΔHdec value among all investigated pseudocyclic iodanes (ΔHdec = 2.5 kJ/mol). Interestingly, the exothermal decomposition of 6 is superimposed by an endothermal melting process (Figure 3c). In direct comparison, indazole 8 is thermally less stable than 7 with a similar ΔHdec value. The throughout higher thermal stability of pyrazoles and indazoles (6–8) in direct comparison to triazoles (2–5) is very likely connected with the lower C/N ratio.

Benzimidazoles 9–11 showed increased ΔHdec values (58.5–76.4 kJ/mol) in comparison with pyrazoles 6–8. Broad decomposition peaks (up to 14 °C peak width – see Supporting Information File 1) were observed at remarkable high Tpeak values (193.9–210.1 °C). Following these results, it has been intriguing to analyze the influence of the heteroatom in the heterocyclic moiety on the thermal decomposition process. The change of one nitrogen atom to sulfur as in thiazole 12 resulted in a drastic decrease of ΔHdec to 44.9 kJ/mol. In contrast, oxazoles 13 and 14 both had a comparable ΔHdec to 9, however, these NHIs are thermally more labile (Tpeak = 159.2 and 144.0 °C). Compared to 9, diphenylimidazole-substituted NHI 15 exhibited a considerably lower ΔHdec value (39.7 kJ/mol). Among the 1,3-azoles 15 is thermally the most labile one with a Tpeak of 118.9 °C. For an improved overview of the discussed ΔHdec values a graphical comparison sorted by the respective coordinating unit is given in Figure 4.

After obtaining decomposition energies and temperatures for these pseudocyclic NHIs, we were intended to relate these findings with their reactivity. For this purpose, we chose the oxidation of thioanisole at room temperature as the initial model reaction. This reaction shows quantitative conversion and therefore the reactivity of the substrates can be described by the ascertained reaction times [29]. However, because the reaction times differed widely a relative reactivity (based on the negative logarithm followed by normalization) was used for a better comparison (Figure 5).

As expected, the thermally least stable triazoles 2–5 are also the most reactive iodanes in this model reaction, especially N-substituted triazoles 4 and 5. In contrast, the reactivity of triazole 3 is comparable to that of benzoxazoles 13 and 14 as well as pyrazole 7 and indazole 8. In our view thiazole 12 is the best compromise in this regard since it is thermally even more stable than 7 and 8 with a significant higher reactivity. However, pyrazole 6 still shows a good reactivity in this model reaction with a concurrent outstanding thermal stability. If safety issues are a major concern, for example on a very large-scale synthesis, NHIs 6 or 12 should be the first choices. Except of 15 and 9, all diazoles are more stable and more reactive than the well-established benziodoxolone 1. It is also worth mentioning, that even the least stable NHI 5 can be still regarded as “safe” to use [31]. Further investigations are needed to fully capture the synthetic potential of these pseudocyclic NHIs.

We also evaluated the decomposition of cyclic hypervalent iodanes. Here, iodosobenzoic acid (IBA, 16) was chosen as an oxygen-bonded model substrate. In comparison to its pseudocyclic congener 1, 16 demonstrated a higher Tpeak (267.3 °C [19]) and a slightly lower ΔHdec (65.0 kJ/mol vs 72.9 kJ/mol). Cyclic triazole 17 has a significantly higher Tpeak but also a higher ΔHdec compared to the corresponding pseudocycle 2 (134.5 kJ/mol vs 116.3 kJ/mol).

Besides pseudocyclic and cyclic hydroxy(aryl)-λ3-iodanes, mesityl(phenyl)- λ3-iodanes 18–33 were systematically investigated by thermogravimetric analysis. Initially, the thermal decomposition of pseudocyclic diaryliodonium salts 18 and 19 was measured. For both salts, initial endothermic melting was followed by exothermal decomposition (Supporting Information File 1 and Figure 6).

Compared to hydroxy(phenyl)-λ3-iodanes 1 and 2, the pseudocyclic diaryliodonium salts 18 and 19 show a significantly decreased ΔHdec from 72.9 kJ/mol to 10.2 kJ/mol for benziodoxolones 1 and 18 and from 116.3 kJ/mol to 23.4 kJ/mol for the triazole derivatives 2 and 19. The same trend of a higher thermal stability and lower ΔHdec for diaryliodonium salts compared the their hydroxy-substituted congeners can be observed for all other pseudocyclic N-heterocycle-substituted derivatives 20–29. Pyrazole 24 is the only exception. All investigated diaryliodonium salts can be defined as safe due to Tpeak values of usually above 180 °C and ΔHdec values of less than 50 kJ/mol. A graphical comparison of the discussed ΔHdec values for mesityl(phenyl)- λ3-iodanes is given in Figure 7. In comparison with Figure 4 it clearly shows that the relative stability of these heterocycle-stabilized diaryliodonium salts do not show the same trend as observed for the initially discussed hydroxy(phenyl)-λ3-iodanes. In particular, the (pseudo)cyclic pyrazole derivatives 24 and 33 show a comparable high ΔHdec value.

These overall significant lower decomposition energies are in good agreement with published data in the field of reactivity and stability of hypervalent iodine compounds [32]. As another common key characteristic, the exothermic decomposition of diaryliodonium salts occurs during an endothermic melting process as shown in Figure 8. Only the phenylbenzimidazoles 26 and 27 do not show this apparent melting-associated endothermic effect. Interestingly, 22 shows a very unusual endothermal decomposition of −29.81 kJ/mol.

Cyclic mesitylene derivatives 30–33 have significantly increased ΔHdec values. Their TGA/DSC curves reveal a decomposition behavior similar to the pseudocyclic hydroxy(phenyl)-λ3-iodanes with an exothermal decomposition without initial melting as exemplarily shown in Figure 9 for compound 32.

We can thus conclude that the formation of cyclic iodanes results in an undesired increase of ΔHdec value and therefore, their pseudocyclic precursors should be used whenever possible.

Finally, we investigated the decomposition products of one pseudocyclic (25) and one cyclic (33) diaryliodonium salt. Pseudocyclic salt 25 was heated to 185 °C and the resulting oily residue was analyzed by GC–MS (Scheme 1a). Besides dearylation to aryl iodide 25a we observed the formation of an N-arylated product 25b in significant amounts. In a similar experiment compound 33 was heated to 160 °C and 210 °C according to the two exothermic peaks observed in the TGA/DSC curve (see Supporting Information File 1). The resulting product mixture was further analyzed by TLC–MS. While at 160 °C no significant decomposition was visible, pronounced decomposition has been observed at 210 °C. The MS analysis revealed the formation of the N-arylated pyrazoles 33a and 33b as the main products (Scheme 1b).

Based on these comprehensive thermoanalytic studies we conclude that (pseudo)cyclic NHIs are throughout safe to use reagents with a sufficient thermal stability. Only the triazole derivatives (2, 3, and 5) deserve common precautions due to the relatively narrow decomposition peak. In particular, benzothiazole- and pyrazole-substituted hydroxy(phenyl)-λ3-iodanes (12 and 6–8) show an excellent relation between thermal stability and reactivity, in particular in direct comparison with well-known benziodoxolones. We can also conclude that the pseudocyclic forms of aryl(phenyl)-λ3-iodanes should be the reagents of choice as electrophilic aryl group transfer reagents. Thermal decomposition studies indicate that they should be potent electrophilic arene donors.

Funding by the Fonds der Chemischen Industrie (PhD scholarship to AB), Russian Science Foundation (grant No. 17-73-20066) and GACR (19-24603Y) is gratefully acknowledged. TG/DTA for the compound 16 and GCMS measurements of thermal decomposition for the compound 25 were carried out using the core facilities of TPU's “Physical and chemical methods of analysis”.

© 2019 Boelke et al.; licensee Beilstein-Institut.
This is an Open Access article under the terms of the Creative Commons Attribution License (http://creativecommons.org/licenses/by/4.0). Please note that the reuse, redistribution and reproduction in particular requires that the authors and source are credited.
The license is subject to the Beilstein Journal of Organic Chemistry terms and conditions: (https://www.beilstein-journals.org/bjoc) 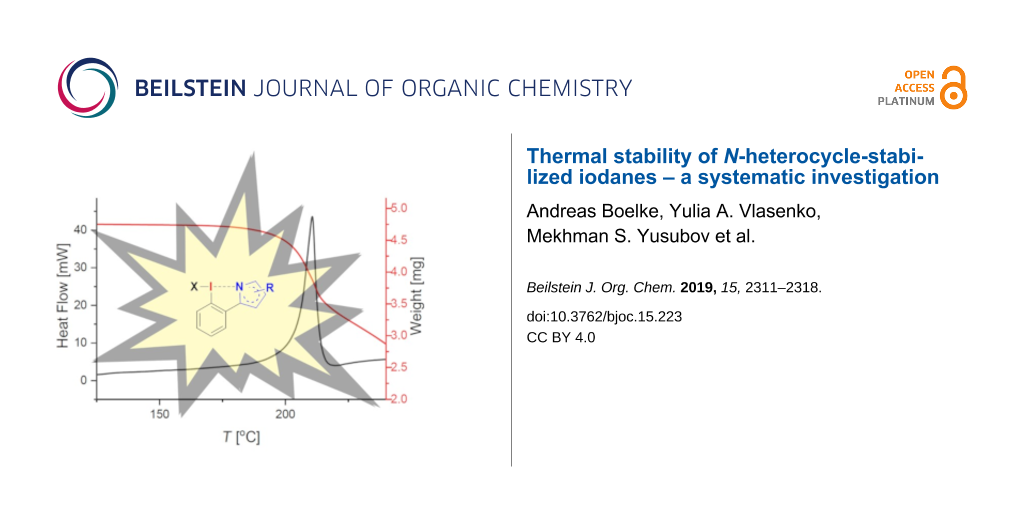