All articles from this author
Diederik Roke


All articles from this author
Wojciech Danowski


All articles from this author
Edwin Otten


All articles from this author
Ben L. Feringa

Supramolecular coordination complexes (SCCs) represent a promising class of compounds which have been used in a variety of molecular systems [1-6]. Taking advantage of the vacant cavity inside these complexes, SCCs have been applied in drug delivery [6-8], supramolecular catalysis [9-12], X-ray structure determination [13,14] and stabilization of reactive species [15-17]. The use of reversible metal–ligand coordination bonds gives rise to systems that allow for adaption to external stimuli such as pH, anions, electric potential, concentration and light [4,8,18-21]. Using light to dynamically control the shape and function of SCCs is a very promising strategy as it is a noninvasive stimulus that can be easily applied with high spatiotemporal control, without producing any waste. Systems have been reported where photoisomerization of azobenzene-derived anions encapsulated in supramolecular palladium complexes caused immediate crystallization [22]. Moreover, azobenzenes have been used to functionalize both the interior [23] and exterior [24] of SCCs to photochemically control guest binding and release. Furthermore, incorporation of dithienylethene into the ligands connecting the metal centers has been used to control host–guest interactions [25-28], structural composition [29], and sol–gel transition [30]. However, dithienylethene undergoes a limited structural change upon photoisomerization and, up to now, photoswitchable ligands based on other types of photochromic switches have not been reported in the literature.

In chiral self-sorting SCCs, either homo- or heterochiral complexes are formed exclusively through high fidelity recognition of the components within the complex [31-33]. The formation of such complexes with high selectivity and well-defined chirality is essential for the application of SCCs towards chiral recognition and sensing [34-37]. To the best of our knowledge no self-sorted responsive SCCs have been reported so far.

Molecular motors based on overcrowded alkenes are unique photoswitches that are able to undergo unidirectional rotation upon irradiation with light [38-40]. Moreover, they can be used as chiroptical multistate switches to control various functions in areas such as catalysis [41-43], soft materials [43-45] and supramolecular chemistry [46,47]. Employing molecular motors as ligands in SCCs provides an interesting strategy to form responsive coordination complexes, as they feature a large geometric change upon switching [47].

Herein, we report a photoresponsive coordination cage with ligands based on a first generation molecular motor (Figure 1). Cages with a Pd2L4 composition are formed from bidentate bispyridyl ligands and Pd(II) ions with a square planar geometry, which have been widely studied [6,48-50]. The photochromic ligands can be switched between three states, forming separate discrete cage complexes, allowing cage-to-cage transformations (Scheme 1). Interestingly, only homochiral cages are formed revealing that a chiral self-sorting process takes place. In addition, two of the cage isomers can bind a tosylate anion in solution by formation of a host–guest complex.

Ligands Z-1 and E-1 (Scheme 1) were synthesized by a Suzuki cross-coupling reaction of 3-pyridinylboronic acid with an E/Z mixture of reported overcrowded alkene precursors [51] (see Supporting Information File 1 for full experimental details). Heating a 2:1 mixture of ligands (S,S)-Z-1 or (S,S)-E-1 with Pd(NO3)2 in acetonitrile at reflux led to the quantitative formation of cage Pd2(stable Z-1)4 or Pd2(stable E-1)4, respectively, as evidenced by 1H NMR, DOSY and HRMS. The 1H NMR signals of the pyridine moieties of the ligands (Ha–d) in the assembled cages are shifted downfield compared to those of the free ligands, as expected due to metal coordination (Figure 2) [28]. As the ligand exchange in Pd2L4 complexes is slow on the NMR timescale, the discrete signals do not represent an average of quickly interconverting isomers [52,53]. The formation of cage complexes using a racemic mixture of ligands stable Z-1 or stable E-1, resulted in the exact same 1H NMR spectrum as was obtained with the enantiopure ligands. Using a racemic mixture of ligands, four different diastereomeric cages can be formed ((S,S)4, (S,S)3(R,R), (S,S)2(R,R)2 and (S,S)(R,R)(S,S)(R,R) and their enantiomeric pairs). However, in both cases, only one set of signals is observed, which is a strong indication that only one species with high symmetry is formed by chiral self-sorting without any sign of the formation of diastereomeric mixtures. To further confirm the self-sorting behavior of these cage structures, CD spectroscopy was performed. A linear dependence of CD amplitude on the ee of ligand stable Z-1 was found, which can be expected when the homochiral enantiomers of cage structure Pd2(stable Z-1)4 are the only optically active species in solution (Figure S1, Supporting Information File 1).

A single crystal of Pd2(stable E-1)4 formed from a racemic mixture of ligand E-1 suitable for X-ray structure determination was grown by vapor diffusion of a 1:1 mixture of benzene and diethyl ether into a solution of the cage in a 1:1 mixture of acetonitrile and chloroform. The crystal structure shows cage structures with a Pd2L4 stoichiometry with one NO3− counterion and one molecule of acetonitrile located inside each cage. In addition, a chloride ion is located close to the metal centers outside of the cage. This counterion most likely originates from the solvent, as chloroform can contain considerable amounts of HCl. The additional anions required to balance the charge of the tetracationic Pd2L4 cage could not be unambiguously located in the difference Fourier map (see Supporting Information File 1 for details). The structure belongs to the P4/n space group and the unit cell is occupied by a pair of enantiomeric cages in which the Pd–Pd axis of each cage is located at the 4-fold rotation axis. This means that the cage structure is made up with exclusively (R,R) or (S,S) enantiomer of the ligand and that the elementary cell is built from the racemic pair of cages.

DFT calculations were performed to gain insight in the self-sorting behavior of cages Pd2(stable Z-1)4 and Pd2(stable E-1)4. The structures of all possible cage diastereomers were optimized using B3LYP/6-31G(d) for C,H,N and LANL2DZ with ECP for Pd in the gas phase without counter ions. The optimized structure of Pd2(stable E-1)4 is in good agreement with the solved X-ray structure (Figure 4). Moreover, the calculations revealed that the homochiral cage Pd2((S,S)-stable E-1)4 (and its enantiomer) are energetically favored by at least 61 kJ mol−1 compared to the other possible diastereomers (Table S1, Supporting Information File 1). Similar calculations on the diastereomers of Pd2(stable Z-1)4 revealed that the homochiral cage diastereomers Pd2((S,S)-stable Z-1)4 are energetically favored as well, by at least 19 kJ mol−1 (Table S2, Supporting Information File 1). These calculations support that these cages are formed by chiral narcissistic self-sorting.

Next, we were interested in the guest binding abilities of cages Pd2(stable Z-1)4 and Pd2(stable E-1)4. The tosylate anion was chosen as it has the appropriate size to fit inside the cages. A Job plot analysis revealed a 1:1 binding stoichiometry between both cage isomers and OTs− (Figures S3–S5, Supporting Information File 1), which corresponds to the model in which OTs− serves as a guest molecule which is encapsulated inside the cages [55,56]. 1H NMR titrations with tetrabutylammonium tosylate revealed that both cages are able to bind OTs−, showing similar binding strengths (KB = 1604 ± 39 M−1 for Pd2(stable Z-1)4; KB = 1758 ± 39 M−1 for Pd2(stable E-1)4 at 293 K).

Finally, the photochemical and thermal isomerization behavior of the complexes was studied. Initially, the behavior of ligand 1 was studied by UV–vis and NMR spectroscopy, showing similar behavior as related first generation molecular motors (see Supporting Information File 1 for full details). Irradiation with 312 nm light at −70 °C isomerizes stable Z-1 to unstable E-1, which undergoes a thermal helix inversion (THI) when warmed to room temperature to form stable E-1. The second half of the rotation cycle is similar, as irradiation with 312 nm light isomerizes stable E-1 to unstable Z-1, which undergoes THI to form stable Z-1 when left for several days at room temperature.

On the other hand, allowing the THI of ligands unstable Z-1 in cage Pd2(unstable Z-1)4 to take place by leaving the solution at room temperature for 5 d did not lead to the formation of Pd2(stable Z-1)4, but to disassembly of the cage and formation of ill-defined complexes. Precipitation of the metal centers in these complexes identified the ligands as a mixture of both stable Z-1 and stable E-1 (originating from the PSS mixture), indicating that the THI does take place. A possible explanation could be that the mixture of stable Z-1 and stable E-1 does not form separate well-defined cage structures, but forms mixed complexes.

In summary, a new photoresponsive supramolecular coordination complex based on overcrowded alkenes is presented, allowing switching between three different cage structures. Interestingly, the cage structures with Pd2L4 constitution were shown to be homochiral, forming single diastereomers as evident from NMR, CD and X-ray analysis, supported by DFT calculations. Additionally, the cage structures were able to bind OTs− inside their cavity. Although photoswitching affords a large geometric change of the ligands, only minor changes were observed in binding constants of the different cage structures. These results show that by incorporation of overcrowded alkenes into SCCs the geometry of cage structures can be controlled by light. Different designs might be considered to translate these geometrical changes to changes in properties such as guest binding affinity and selectivity.

Financial support from the Ministry of Education, Culture and Science (Gravitation program 024.001.035) and European Research Council (Advanced Investigator Grant No. 694345 to B.L.F.) are gratefully acknowledged. We would like to thank the Center for Information Technology of the University of Groningen for their support and for providing access to the Peregrine high performance computing cluster.

© 2019 Stuckhardt et al.; licensee Beilstein-Institut.
This is an Open Access article under the terms of the Creative Commons Attribution License (http://creativecommons.org/licenses/by/4.0). Please note that the reuse, redistribution and reproduction in particular requires that the authors and source are credited.
The license is subject to the Beilstein Journal of Organic Chemistry terms and conditions: (https://www.beilstein-journals.org/bjoc) 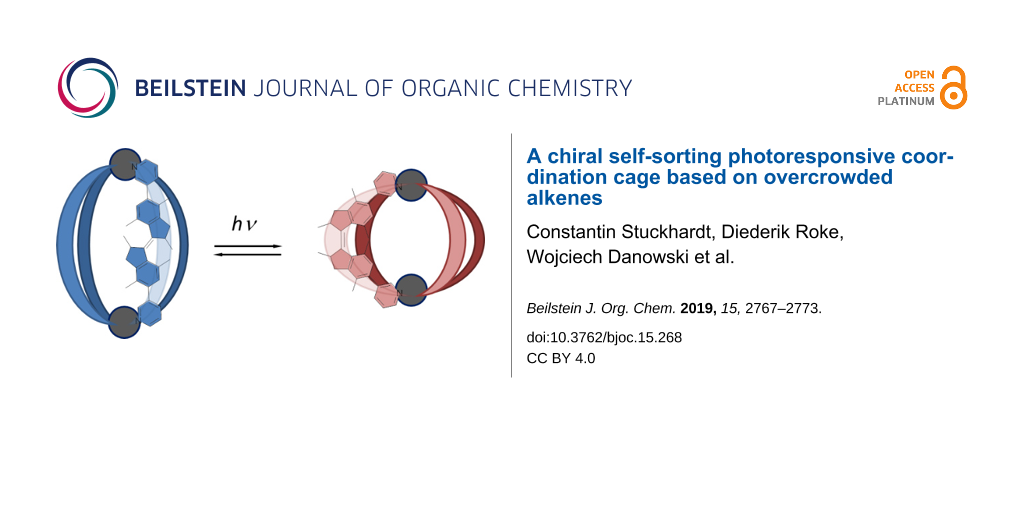