All articles from this author
Giada Caniglia

The ability of trans- and cis-1,2-glucopyranosyl and cyclohexyl ditriazoles, synthesized by CuAAC "click" chemistry, to form gels was studied, their physical properties determined, and the self-aggregation behavior investigated by SEM, X-ray, and EDC studies. The results revealed that self-assembly was driven mainly by π–π stacking interactions, in addition to hydrogen bonding, with the aromatic rings adopting a high degree of parallelism, as seen in crystal packings and ECD data. Furthermore, π–bromine interactions between the bromine atom of the aryl substituents and the triazole units might also contribute to an overall stabilization of the supramolecular aggregation of bis(4-bromophenyl)triazoles. The trans or cis spatial disposition of the triazole rings is highly important for gelation, with the cis configuration having higher propensity.

Structures self-assembled by noncovalent interactions give rise to supramolecular architectures with specific physical and/or chemical properties. Gels are colloid systems in which the dispersed phase has combined with the dispersion medium to yield a semisolid material. Gels from low-molecular-weight gelators have potential applications in high-tech materials [1-3] and biomedical sciences [3-6]. Triazole derivatives have shown excellent gelation properties [7-10], in addition to a broad range of biological activities [11-14].

During the synthesis and characterization process of glucosyl mono- and ditriazole derivatives, which we carried out in order to analyze the use of aryltriazoles for the determination of absolute configuration [15], we serendipitously discovered that these glucosyl ditriazoles led to gels. Therefore, we carried out the corresponding supramolecular studies and report herein the ability of ditriazoles to form gels, their physical properties, as well as the dependence of these properties on the cis/trans relative configuration.

A large set of mono- and ditriazoles was synthesized using cycloaddition reactions based on "click" chemistry [16-18] of azides and alkynes catalyzed by Cu(I) salts, the CuAAC reaction. Self-assembling properties were not observed for any of the prepared monotriazoles, namely the 4-substituted 1-glucopyranosyltriazoles 1a–g and 2a–g (Scheme 1) [15]. However, most ditriazoles 7a–g and 8a–g (Scheme 2) showed supramolecular features, i.e., their DMSO solutions prepared for NMR analyses spontaneously transformed into gels inside the NMR tubes.

Three cis-/trans-configured pairs of compounds were chosen for a gelation ability study. Thus, analogue pairs 8f/7f (Scheme 2), 10/9 (Scheme 3), and 14/12 (Scheme 4) were selected. The pair 8f/7f was chosen for having different anomeric configurations in the glucosyl system, and therefore different cis/trans relationships with the equatorial substituent in position 2. Compounds 9 and 10 were selected to monitor the effects of the unprotected hydroxy groups, and the last pair, 14/12, for being a non-glycosyl system, yet with the same cis/trans relationship as the former compounds. In addition, the available compounds 8a, 8b, and 8e (cis) [15] were also tested for gelation to support the results.

Compounds 7 and 8 (Scheme 2) were successfully prepared from the corresponding alkynes and diazides 5 and 6, respectively. In this context, it was required to isolate 5 and 6 before the coupling reaction could be performed.

Compounds 9 and 10 (Scheme 3) were obtained in good yields by treatment of 7f and 8f, respectively, with sodium methoxide in CH2Cl2/MeOH.

As can be seen in Figure 1 and Table 1, all these compounds except 9 (having a trans configuration) formed gels in DMSO or DMSO/H2O mixtures. While the ditriazole species with an α-anomeric configuration, 8f (cis), was able to form gels at different concentrations and DMSO/H2O ratios, its β-anomer 7f (trans) only formed a gel when the sample was exposed to a temperature of 8 °C in a refrigerator. This temperature gave rise to an opaque gel that melted above 18 °C (Table 2). The same approach, along with reduction of the minimum gelation concentration to 1.1% w/w (in DMSO) was used to obtain a gel based on 8f. In addition, this compound proved to be an effective translucent/transparent low-molecular-weight gelator in aqueous solutions of DMSO, forming gels in DMSO/H2O, 2:1, v/v at a minimum concentration of 0.8% w/w. The presence of water favored gel formation, decreased the gelation concentration, and the gel's appearance became translucent/transparent. In addition, these gels were stable for several months in sealed vials, although they could be disrupted by agitation or heating. However, the gel state could be restored through cooling.

Compounds having an α-anomeric configuration (cis), independent of the hydroxy groups, were either acetylated (8f) or not (10), forming gels much easier than their corresponding β-anomers (trans). This showed that their ability to form gels was critically dependent on the cis/trans configuration present in the molecule.

To confirm this result, the supramolecular properties of trans- and cis-1,2-bis(4-(4-bromophenyl)-1H-triazol-1-yl)cyclohexanes 12 and 14, having the same configuration as compounds 7f and 8f, respectively, were analyzed. Both compounds formed gels, but the trans stereoisomer 12 did so only at a low temperature (8 °C) in DMSO (G = 1.1, w/w), similar to the β-anomer 7f, which possessed the same trans configuration. On the other hand, the cis stereoisomer 14 formed an opaque gel at room temperature in DMSO/H2O, 9:1, v/v (G = 0.8, w/w), showing a higher potency for gelation, similar to 8f. As such, this relationship mirrors the behavior observed for the 7f/8f pair. Table 2 also contains the different Tgs values obtained by the dropping ball method.

Supportive of these conclusions is the facility of cis-configured ditriazoles to form gels. Thus, compound 8a, with alkyl groups in position 4 on the triazolyl groups, and compound 8e, with tolyl groups in that position, gelled easily (Table 1 and Table 2).

In addition, 4-methoxycarbonyl-substituted ditriazole 8b also formed a gel, which was, however, too soft for the dropping ball method to be performed correctly. Therein, the ball dropped down immediately, and changing the DMSO/water ratio did not improve this result. In any case, the results obtained using 8a and 8e point at the fact that the presence of either the phenyl groups or the bromine atoms are not strictly necessary for gelation, although both might contribute to an overall stabilization of the supramolecular aggregation.

Optical micrographs of the xerogels formed from compounds 7f, 8f, 10, 12, and 14 were obtained by SEM (Figure 2). Analyses of these images revealed typically fibrous networks for all except 10. Compound 7f (trans) showed a dense, thin, short, and interlaced/tangled fiber network. The corresponding α-anomer 8f (cis) exhibited an irregular, porous, and dense structure having thin and short fibers. The xerogel of compound 12 showed long, thin, and relatively straight fibers, with lack of torsion, as well as regularity of the network. Its cis stereoisomer 14 showed a fibrous network, but of much shorter length. However, the gel of compound 10 showed a different morphology, with short and planar films or scales. This could be due to the high proportion of water in the gel and/or the presence of the three free hydroxy groups in its structure, changing its intermolecular self-assembly behavior.

Various efforts were made to crystallize the obtained compounds; however, only 12 led to single crystals suitable for X-ray crystallography. Its analysis (Figure 3) not only confirmed the structure, but in addition showed a well-organized crystal packing (Figure 4) where the alternate disposition of the molecules displayed a parallelism between the p-bromophenyl groups as well as between the triazole rings, and therefore the presence of multiple intermolecular π–π stacking and π–bromine [19] interactions. This compound precipitated in the presence of any amount of water and gelled only in DMSO at a low temperature.

Electronic circular dichroism (ECD) is a powerful technique to study supramolecular systems [20,21], since many interactions responsible for the presence of CD Cotton effects occur through space, such as the well-known ECD exciton chirality method [22-24].

ECD of compound 10 in a DMSO/H2O (1:2, v/v) solution and in gel form were successfully measured (Figure 6). ECD of the solution exhibited negative first/positive second exciton Cotton effects at 262 (Δε = −8.6) and 242 nm (Δε = +3.3), respectively (Figure 6, in black), identical to those obtained for this compound in CH3CN [15], although of lower intensity. On the other hand, the ECD spectrum of the gel instead exhibited a normal Cotton effect at 253 nm (Δε = −3.8), which, at the same time, was the wavelength of its absorption maximum (Figure 6, in blue). The striking absence of exciton Cotton effects is in complete agreement with the high degree of parallelism between the chromophores, as observed in the crystal packing (Figure 5). Two chromophores can only be coupled under an exciton interaction if the angle between the 1La transitions is different from 0° or 180°, since this interaction is governed by an equation with a vectorial product. The lack of exciton pairwise interactions between the two chromophores in positions 1 and 2 of each molecule could be due to the intercalation of a third chromophore between the two former in a parallel disposition to one of them (see Figure 5).

In summary, the capacity of di-1,4-disubstituted 1,2,3-triazoles to form gels was studied taking the dependence on the trans/cis configuration of the molecules into account. The results clearly show that compounds having the cis configuration are more prone to forming thermoreversible gels than those with the trans configuration. In fact, compound 10, with an α-anomeric configuration (cis), showed the lowest gelation concentration at room temperature (G 0.5% w/w) in DMSO/H2O, 1:2, v/v.

The crystal structures obtained for either the cis or trans configuration through X-ray diffraction studies can be considered good approximations to the supramolecular structure of aryltriazoles in gels. Thus, these compounds showed a high degree of parallelism between the phenyltriazolyl rings, therefore revealing the presence of π–π stacking and π–bromine interactions. In addition, compound 10 (cis), with free hydroxy groups, formed hydrogen bonds between the hydroxymethyl groups in position 6 and DMSO molecules while in a gg rotamer conformation. The different types of EDC spectra obtained for compound 10 in solution (exciton) and in gel (non-exciton), using DMSO/H2O, 1:2, v/v, is in total agreement with the supramolecular structure of the crystal packing of this compound (Figure 5).

1H NMR spectra were recorded at 500 and 600 MHz, and 13C NMR spectra at 100, 125, and 150 MHz (VTU 300.0 K). Chemical shifts are reported in ppm. The residual solvent peak was used as an internal reference. HRMS was performed by HRTOFMS in positive mode (ES+). For analytical and preparative thin-layer chromatography, silica gel ready-foils and glass-backed plates (1 mm) were used, respectively. These were visualized using UV light at λ = 254 nm and/or developed by spraying with AcOH/H2O/H2SO4 (20:4:1, v/v/v) and heating to 150 °C. Column chromatography was performed using silica gel (0.015–0.04 mm) and n-hexane/EtOAc solvent systems. All reagents were obtained from commercial sources and used without further purification. Solvents were dried and distilled before use. ECD was recorded in the range of 200–400 nm at room temperature by using 10 mm quartz cells. SEM images were taken by a TEM, JEOL JEM 1010 belonging to the Electronic Microscopy Service (SEGAI) of the University of La Laguna, Spain.

Melting points were measured using the dropping ball method. For that, a stainless steel ball of ca. 3 mm diameter (m = 130.2 mg) was placed on the gel in a tube with a diameter of 1 cm. This was placed inside an oil bath together with a thermometer, and the temperature of the gel melting was recorded.

This work was supported by the Spanish MINECO and cofinanced by the European Regional Development Fund (ERDF) CTQ2014-56362-C2-1-P. The authors thank Prof. David Díaz (University of Regensburg) for his help and useful suggestions.

cis–trans Isomerization of silybins A and B

© 2019 Tejera et al.; licensee Beilstein-Institut.
This is an Open Access article under the terms of the Creative Commons Attribution License (http://creativecommons.org/licenses/by/4.0). Please note that the reuse, redistribution and reproduction in particular requires that the authors and source are credited.
The license is subject to the Beilstein Journal of Organic Chemistry terms and conditions: (https://www.beilstein-journals.org/bjoc) 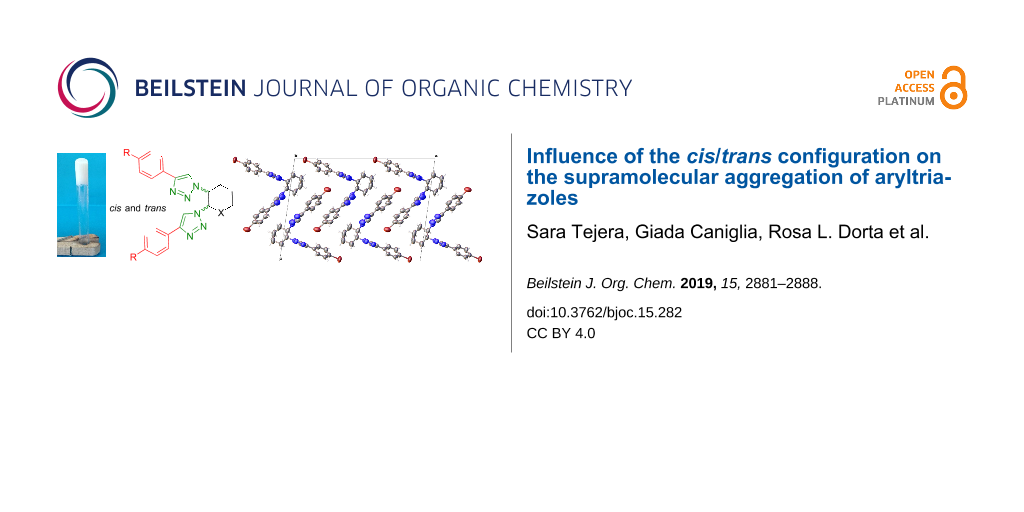