All articles from this author
Ilan Marek

The highly strained structure and bonding properties of cyclopropyl rings have constantly fascinated successive generations of chemists. These small carbocycles are known to have high ring strain (27.5 kcal/mol) and limited degrees of freedom, making them very attractive substrates for various chemical transformations [1]. The cyclopropane subunit is also present in many biologically important compounds such as pheromones, fatty acid metabolites, unusual amino acids and possess interesting herbicidal, insecticidal, antibiotic, antibacterial, antifungal, antiviral and antitumor activities [2]. For these reasons, cyclopropanes have been extensively studied and numerous approaches have been described for their preparation [3]. Among all possible three-membered ring subunits that have been reported, cyclopropanols have recently attracted renewed attention as they are not only contained in many natural products but they are also important precursors in the synthesis of various biologically active molecules and pharmaceuticals such as antidepressants, antiviral and antibacterial drugs [4]. Cyclopropanols and their derivatives are considered to be carbocyclic homologues of enols presenting similar chemical properties which are caused by the unsaturated character of the cyclopropyl ring. Although cyclopropanols are usually less reactive than enols and enolates, their chemical properties are somehow more diverse as they undergo useful transformations either with preservation or rupture of the cyclic structure [5]. Several reliable approaches to produce cyclopropanols have been reported in the literature (Scheme 1) [6] but a number of challenges still exist particularly for the stereoselective preparation of cyclopropanols of high structural complexity and substitution pattern. Since the first synthesis of cyclopropanol by Cottle [7], the most popular methods for the preparation of cyclopropanols rely on the transformation of enolates [8,9], silyl enol ether [10-12], vinyl borane [13-17], Fischer carbene addition [18], addition of nucleophiles to carbonyl groups [19-25], elimination [26,27], oxidation [28] or on the Kulinkovich reaction [29-41] as summarized in Scheme 1. However, and despite the increasing and justified popularity of all of these methods, the short summary described in Scheme 1 emphasizes an intrinsic problem: a different strategy is required for every cyclopropanol and cyclopropylamine that one needs to prepare, limiting the rapid structural diversification which is usually essential for biological studies. From this rapid tour d’horizon, it is clear that if one could design a stereoselective synthetic pathway to afford polysubstituted cyclopropanols (or cyclopropylamines) potentially bearing several diastereo- and enantiomerically enriched adjacent stereogenic centers, including quaternary carbon stereocenters, as single diastereo- and enantiomer from a simple precursor, it would certainly provide an additional and useful entry to the synthesis of these heterosubstituted three-membered rings.

In order to assemble both cyclopropanols and cyclopropylamines from a single and unique precursor in a single-pot reaction double facial selection by the catalyst is required: (i) regioselectivity when R1 is different to H and enantioselectivity when R1 is equal to H (left or right) and (ii) diastereotopic face selection (top or bottom) as described in Scheme 2. Since the pioneering addition of a carbon–metal bond (carbometalation) across the double bond of cyclopropenes [42], a very large number of groups have reported the addition of organometallic species demonstrating the generality of this approach for the preparation of cyclopropanes [43-63]. To achieve good diastereoselectivity during the carbometalation reaction, few conditions needed to be fulfilled in the design of the starting cyclopropenyl ring (Figure 1):

We therefore decided to start our research with cyclopropanes bearing an electron-rich methoxy group on one side of the ring and a phenyl or methyl substituent on the opposite side, respectively. Following reported methods from the literature [64-67], cyclopropenes 3 were easily prepared through the well-known RhII-catalyzed decomposition of diazo esters in the presence of alkynes to give cyclopropenyl esters 1. Reduction of 1 using DIBAL-H afforded cyclopropenyl alcohols 2 and subsequent protection of the primary alcohols gave 3 in good yields (Scheme 3).

First, we checked that the carbometalation reaction was regio- and diastereoselective by addition of lower order cyanocuprate, easily obtained from the corresponding organolithium and a stoichiometric amount of CuCN (Scheme 4) [68-70].

The addition reaction proceeds similarly for the addition of alkyl- or arylcuprate (4a,b and 4c) as well as for the addition on cyclopropene possessing either a primary or secondary alkyl group at the vinylic carbon center (4a–c and 4d,e). Having in hand diastereoisomerically pure and configurationally stable cyclopropylcopper species 3Cu, we next turned our attention to their stereoselective oxidation reaction (Scheme 5). Considering electrophilic oxidation processes of organometallic species, molecular oxygen seems to be the most obvious choice due to its abundancy and low cost. Nevertheless, the reaction of molecular oxygen with a organocopper species usually proceeds through single-electron transfer to dioxygen, leading to either a loss of stereoselectivity, degradation of the organocopper or to the formation of dimer as major products [71]. Therefore, it was clear that a different approach for the oxidation process was needed. Oxenoid, possessing the general structure M–O–LG, with a metal and a leaving group connected to an oxygen atom, have been shown to be an excellent electrophilic oxygen source for nucleophilic organometallic species [72]. Since the original discovery of Müller and Töpel of lithiated peroxides [73], several studies have been reported on the reactivity of oxenoids [74-77], indicating that the reaction of a nucleophile with oxenoid proceeds through an SN2 process [74]. Following the carbocupration of cyclopropene 3 into cyclopropylcopper species, the subsequent oxidation with the amphiphilic lithiated hydroperoxide t-BuOOLi (oxenoid), simply generated by deprotonation of t-BuOOH with n-BuLi, led to the copper alkoxide, as anticipated, without the formation of free radical intermediates. As already reported [78], the expected 2,2,3,3-tetrasubstituted cyclopropanols 5 were obtained as single diastereoisomers (Scheme 5).

The reaction proceeded for all R1 and R2 groups tested and determination of the stereochemistry confirmed that the oxidation reaction proceeds with pure retention of configuration at the metalated center (intramolecular SN2 reaction or 1,2-metalate rearrangement) [78-80]. It should be noted that when the same sequence of diastereoselective carbometalation/oxidation was performed on cyclopropenyl ester 1, the in situ-formed donor–acceptor cyclopropanol undergoes a selective ring-opening to provide the acyclic product possessing a quaternary carbon stereocenter [57]. As the enantioselective synthesis of the cyclopropenylmethyl ether 3 was easily achieved in high enantiomeric ratio (er 93:7, Scheme 5 [78,81,82]), the subsequent combined diastereoselective carbometalation reaction and oxidation gave the enantiomerically enriched cyclopropanols 5 as unique diastereoisomer with the same enantiomeric ratio as the starting material (Scheme 5, dr 98:2:0:0, er 93:7). Having established the optimized reaction conditions for the preparation of diastereomerically pure 2,2,3,3-tetrasubstituted cyclopropanol derivatives 5, we were interested to expand the scope of this transformation and include different types of cyclopropene precursors. We concentrated our efforts on the reaction of diversely substituted 3-methyl-3-arylcyclopropenes 6. In this case, as there is no coordinating functionality to dictate the facial selectivity, the control of the diastereoselectivity may be more challenging. Performing the same carbocupration/oxidation sequence on 3-methyl-3-phenylcyclopropene 6a,b (R1 = H), we were pleased to observe that trisubstituted cyclopropanols 7a–h were obtained in good yields with excellent diastereoselectivities (Scheme 6).

The addition of primary, secondary and tertiary alkylcuprates or arylcuprates proceeded smoothly to give the desired cyclopropanols (7a–h) after hydrolysis. In all cases, the easily prepared cyclopropanol derivatives were obtained with the methyl, the incoming organometallic and the alcohol in the syn-orientation which was determined through comparison of the hydrolyzed carbometalated products with compounds already described in the literature [83]. To further increase the structural complexity of the final cyclopropanols, we also tested the reaction on nonfunctionalized trisubstituted cyclopropenes (6c–g). Addition of primary alkyl- or arylcuprates followed by the oxidation of the cyclopropylcopper species proceeded equally well and gave the corresponding cyclopropanols possessing two adjacent quaternary carbon stereocenters (7i–r) in good yields and excellent diastereomeric ratios. Here again, the methyl, the alkyl group from the organometallic and the alcohol in the resulting cyclopropanols are syn-oriented as previously observed. As reported in a different context, the nature of the two substituents on the cyclopropene rings could be changed without drastically altering the selectivity of the reaction [83,91].

General procedure for the carbocupration reaction of 3a,c with RCuCNLi

To a suspension of CuCN (1.5 equiv) in 8 mL of Et2O was added alkyllithium dropwise at −35 °C (2 equiv). The resulting mixture (pale yellow in case of MeLi and PhLi and dark brown in case of n-BuLi and n-HexLi) was allowed to stir for 30 min. Cyclopropene 3a,c (1 equiv in 2 mL/mmol of Et2O) was added at that temperature and the reaction mixture was stirred until TLC shows complete consumption of the starting material (eluent hexane/EtOAc 9:1, ca. 30 min). The reaction was then quenched with an aqueous solution of NH4Cl/NH4OH (2:1). The aqueous layer was extracted twice with EtOAc and the combined organic phases were washed with brine, dried over MgSO4, filtered, and concentrated under reduced pressure. The crude mixtures were then purified by flash chromatography using pentane/diethyl ether as eluent.

The reaction was performed on a 1 mmol scale. To a suspension of CuCN (2 equiv) in 8 mL of Et2O was added alkyllithium dropwise at −35 °C (2 equiv/2 mmol). The resulting mixture (pale yellow in case of MeLi and PhLi and dark brown in case of n-BuLi and n-HexLi) was allowed to stir for 30 min. Cyclopropene 6a–g (1 equiv/1 mmol in 2 mL of Et2O) was added at that temperature and the reaction mixture was stirred until TLC shows complete consumption of the starting material (eluent hexane/EtOAc 9:1, ca. 30 min). The oxenoid was prepared in a different flask by slowly adding n-BuLi (1.2 equiv) to a solution of tert-butyl hydroperoxide (2 equiv) in THF (5 mL/2 mmol) at −80 °C. After 30 min at −80 °C, the resulting t-BuOOLi was transferred to the organocopper dropwise at −78 °C via a cannula. The mixture (orange to brown) was stirred at this temperature until disappearance of the cyclopropylcopper species (followed by TLC, eluent hexane/EtOAc 9:1, ca. 30 min). The reaction was then quenched with an aqueous solution of NH4Cl/NH4OH (2:1). The aqueous layer was extracted twice with Et2O and the combined organic phases were washed with brine, dried over MgSO4, filtered, and concentrated under reduced pressure. Crude mixtures were then purified by flash chromatography using pentane/diethyl ether as eluent.

This project has received funding from the European Union’s Horizon 2020 research and innovation program under grant agreement No 786976. I. M. is holder of the Sir Michael and Lady Sobell Academic Chair.

© 2019 Simaan and Marek; licensee Beilstein-Institut.
This is an Open Access article under the terms of the Creative Commons Attribution License (http://creativecommons.org/licenses/by/4.0). Please note that the reuse, redistribution and reproduction in particular requires that the authors and source are credited.
The license is subject to the Beilstein Journal of Organic Chemistry terms and conditions: (https://www.beilstein-journals.org/bjoc) 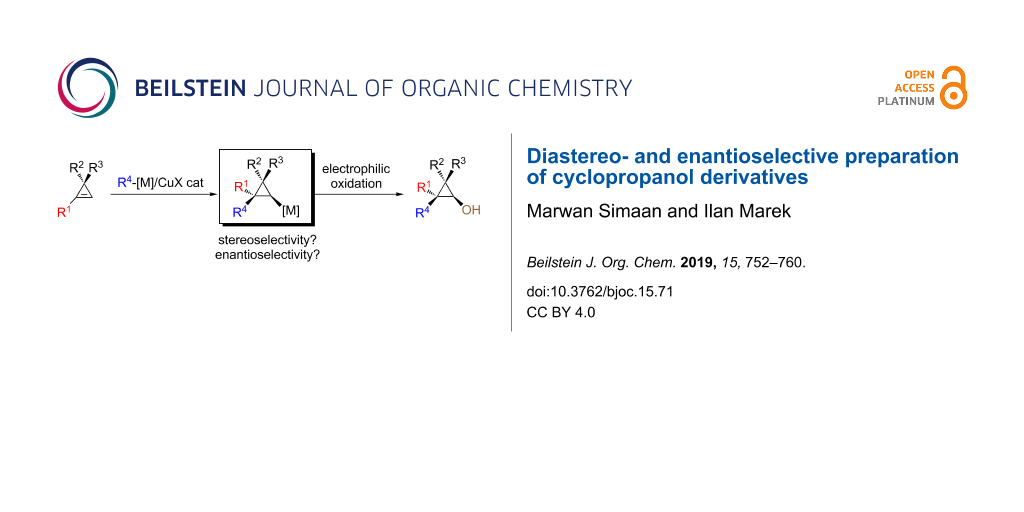