An efficient synthesis of the guaiane sesquiterpene (−)-isoguaiene by domino metathesis


All articles from this author
Ahmed F. Darweesh


All articles from this author
Peter Metz

The guaiane sesquiterpene (−)-isoguaiene (1) has been isolated from the liverworts Pellia epiphylla [1] and Dumortiera hirsuta [2] as well as from several Pimpinella species [3,4], while the (+)-enantiomer of 1 has been isolated from the roots of Parthenium hysterophorus [5]. A recent enantioselective synthesis of (−)-isoguaiene (1) from (+)-dihydrocarvone [6] enabled an unambiguous assignment of its absolute configuration as depicted in Figure 1. Due to the structural similarity of 1 and the trisnorsesquiterpene clavukerin A (2), we were interested in developing an efficient synthetic access to 1 using a combined organocatalytic/metal-catalyzed strategy related to the one applied to the preparation of 2 [7,8].

As illustrated in Scheme 1, two alternative routes were retrosynthetically devised, both of which feature a domino metathesis event and an organocatalytic Michael addition as the key steps. In closer analogy to our improved synthesis of clavukerin A (2) [8], a relay metathesis [9] of trienyne 3 was expected to lead to the hydroazulene 1 selectively. Trienyne 3 was envisioned to result from a stereoselective Michael addition of aldehyde 4 to methyl vinyl ketone [7,8,10] followed by chemoselective elaboration of the two carbonyl functions. Finally, aldehyde 4 was traced back to the commercially available starting material (S)-citronellal (5). On the other hand, a more rarely used enediyne metathesis [11-14] of compound 7 or its relay surrogate 8 might give rise to the conjugated triene 6, chemoselective hydrogenation [15] of which would generate the target molecule 1. Similar to the disconnection of trienyne 3, the metathesis substrates 7 and 8 can be derived from aldehyde 9, which is finally also traced back to (S)-citronellal (5).

Scheme 2 illustrates the synthesis of (−)-isoguaiene (1) by relay metathesis of trienyne 3. The unsaturated aldehyde 4 required for the organocatalytic Michael addition was readily prepared in five steps commencing with (S)-citronellal (5). After protection of the aldehyde function as the dimethyl acetal [16-18], hydroboration and oxidative work-up of 10 provided a mixture of epimeric alcohols 11 that was unified by Ley–Griffith oxidation [19] to give ketone 12 [20]. Subsequent Wittig reaction with ylide 13 and acetal cleavage of the resultant olefin 14 delivered aldehyde 4 with considerably higher efficiency compared to the known six-step preparation of ent-4 from (−)-menthone [21]. Asymmetric Michael addition [7,8,10] of aldehyde 4 to methyl vinyl ketone (15) proceeded with high catalyst-controlled diastereoselectivity (dr = 23:1) to yield keto aldehyde 18. Chemoselective dibromoolefination with ylide 19 prepared from dibromomethyltriphenylphosphonium bromide and sodium tert-butoxide [22] led to ketone 20 virtually without erosion of the relative configuration (dr = 22:1). After subjecting 20 to carbonyl olefination with unsaturated ylide 21 [8] followed by alkyne generation [23] with butyllithium in a one-pot process, trienyne 3 was obtained as a 1.6:1 mixture of E and Z olefin isomers. Due to the presence of the isopropyl group at the disubstituted alkene [24] of 3, 30 mol % of the second generation Grubbs catalyst 22 were required to effect the relay metathesis of 3 to (−)-isoguaiene (1) in refluxing benzene in a good yield of 51%.

Thus, by application of a domino metathesis strategy featuring trienyne 3, only 9 steps were needed to secure the guaiane sesquiterpene 1 in 19.7% overall yield starting from (S)-citronellal (5), which compares favorably with the previous synthesis of 1 from (+)-dihydrocarvone (10 steps, 6.9% overall yield) [6]. Scheme 3 depicts our first attempts to realize an alternative domino metathesis strategy using enediyne 7.

Ozonolysis of the unsaturated acetal 10 gave aldehyde 23 [17,18] that was subjected to dibromoolefination with ylide 19 as described for the transformation of aldehyde 18. Use of the preformed ylide 19 led to reproducibly higher yields of 24 in comparison with the application of tetrabromomethane and triphenylphosphine [23]. One-pot alkyne formation and methylation [23] of 24 to furnish 25 and subsequent acetal hydrolysis provided the known aldehyde 26 [25] in very good overall yield. In our hands, the "demethanation" of (S)-citronellol to produce the primary alcohol corresponding to aldehyde 26 according to the protocol of Abidi (NaNO2, aqueous AcOH) [26] as a potential shortcut to 26 only proceeded with a maximum yield of 20%. Asymmetric Michael addition of aldehyde 26 to methyl vinyl ketone (15) followed immediately by treatment of the resultant unstable keto aldehyde 27 with ylide 19 delivered dibromo olefin 28 with high diastereocontrol (dr = 19:1). Olefination of ketone 28 with ylide 13 and alkyne formation with butyllithium in a one-pot procedure then gave rise to enediyne 7 in excellent yield. Unfortunately, all attempts to achieve a domino metathesis of 7 to hydroazulene 6 only met with failure. Thus, neither the Grubbs catalysts 22 or 29, nor the Hoveyda–Blechert catalyst 30 [27,28] in the presence or absence of ethylene effected the desired transformation to triene 6. As a consequence, we resorted to a relay strategy for enediyne metathesis as well, and the successful execution of this idea is illustrated in Scheme 4.

Similar to the transformation of ketone 20, the one-pot conversion of ketone 28 by olefination with unsaturated ylide 21 and alkyne formation with butyllithium yielded dienediyne 8 as a 1.3:1 mixture of E and Z olefin isomers. Gratifyingly, treatment of 8 with 25 mol% of the first generation Grubbs catalyst 29 produced the desired hydroazulene 6 in refluxing dichloromethane. Without purification, the crude sensitive conjugated triene 6 was immediately hydrogenated in the presence of the Wilkinson catalyst [29] to give (−)-isoguaiene (1) by chemoselective reduction of only the terminal olefin [15] in satisfactory yield over the 2 steps. Hence, the natural product 1 was available through this domino metathesis strategy featuring dienediyne 8 in 10 steps from (S)-citronellal (5) in 14.5% overall yield.

In summary, we have accomplished two short and efficient catalytic routes from (S)-citronellal (5) to the guaiane sesquiterpene (−)-isoguaiene (1) using either a trienyne or a dienediyne metathesis and highly diastereoselective organocatalytic Michael additions of aldehydes derived from 5 as the key steps.

This paper is dedicated to Professor Hans-Ulrich Reißig on the occasion of his 70th birthday. Dr. Ahmed Fathy Darweesh thanks the Alexander von Humboldt Foundation for funding his research stays in Dresden, during which a part of this work has been carried out.

© 2019 Wang et al.; licensee Beilstein-Institut.
This is an Open Access article under the terms of the Creative Commons Attribution License (http://creativecommons.org/licenses/by/4.0). Please note that the reuse, redistribution and reproduction in particular requires that the authors and source are credited.
The license is subject to the Beilstein Journal of Organic Chemistry terms and conditions: (https://www.beilstein-journals.org/bjoc) 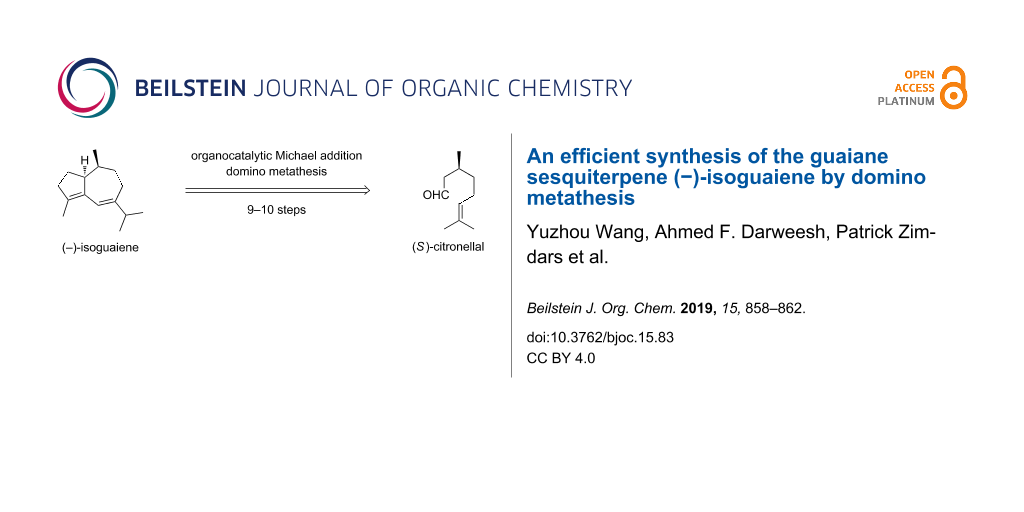