All articles from this author
Saeed Balalaie


All articles from this author
Saber Mehrparvar


All articles from this author
Fatemeh Darvish


All articles from this author
Frank Rominger


All articles from this author
Fatima Hamdan

An efficient approach for the synthesis of pyrazolopyridines containing the aminochromane motif through a base-catalyzed cyclization reaction is reported. The synthesis was carried out through a three-component reaction of (arylhydrazono)methyl-4H-chromen-4-one, malononitrile, primary amines in the presence of Et3N at room temperature. However, carrying out the reaction under the same conditions without base led to a fused chromanyl-cyanopyridine. High selectivity, high atom economy, and good to high yields in addition to mild reaction conditions are the advantages of this approach.

Chromone derivatives have been found to exhibit a broad range of biological activities [11-13]. 3-Formylchromone was used as a suitable starting material for the construction of various heterocyclic skeletons [14-17].

Pyrazolopyridines are a promising class of heterocyclic compounds which inhibits cyclin-dependent protein kinase-2 (cdk-2), cyclin-dependent protein kinase-5 (cdk-5), and phosphatidylinositol 3-kinase (PI3-K) [18-21]. Thus, these compounds have a high potential for the treatment of several neurological diseases. Some examples of pyrazolopyridine derivatives are anxiolytic drugs such as tracazolate, cartazolate, and etazolate [22]. Other pyrazolopyridine-containing bioactive compounds include a GSK-3 inhibitor [23] and BAY 41-2272, [24,25] and could be used as cardiovascular therapeutic agents (Figure 1). Moreover, pyrazolopyridine derivatives also have industrial importance as fluorophores and luminophores in organic light emitting diodes [26,27].

The synthesis of pyrazolopyridines has been reported in several different multistep manners [28-36]. However, some of the reported methods have several limitations such as long reaction time, low yields, boring workup procedures, and several side reactions with less selectivity of the process. Due to the extended biological activities of pyrazolopyridines, finding a suitable approach for the synthesis of these compounds is a synthetic challenge in organic synthesis. In continuation of our research work to construct fused heterocyclic skeletons [37-40], we describe the synthesis of pyrazolopyridines 4a–m containing a chromone moiety (Scheme 1). The synthetic approach was based on a domino reaction of (arylhydrazono)methyl-4H-chromen-4-one 1a–g, primary amines 2a–c, and malononitrile (3) in the presence of triethylamine in ethanol at room temperature.

In the beginning, 3-formylchromone was prepared based on a known method [41]. Then, we focused our initial study on the preparation of the (arylhydrazono)methyl-4H-chromen-4-one via the reaction of 3-formylchromone and phenylhydrazine [42,43]. Subjecting (arylhydrazono)methyl-4H-chromen-4-one (1a), benzylamine (2a), and malononitrile (3) in the presence of 40% triethylamine was stirred at room temperature in ethanol. Compound 4a was precipitated and filtered. After confirmation of the structure, we tried to find a suitable base and solvent for the model reaction. The results are summarized in Table 1.

aThe reported yields are the related amount of pure precipitate that did not require any further purification.

The reactions were studied in the presence of 10, 20, 30% triethylamine as a base in ethanol and the yields were formed 25, 38, 58%, respectively (entries 1–3, Table 1). After changing the ratio of triethylamine to 40%, the yield of pure product was increased to 65% in ethanol. The yield of the reaction in the presence of DBU and diisopropylethylamine (DIPEA) as a base were 61 and 60%, respectively. This means that the type of base does not play an effective role in this reaction. The effect of different solvents (EtOH, MeOH, MeCN, and DCM) was investigated on the progress of the reaction. As shown in Table 1, carrying out the reaction in EtOH was found the best choice due to the better yield (65%). Based on this data, the optimized reaction conditions were achieved using 40% of Et3N in ethanol at room temperature. The use of a protic solvent seems to be essential for the progress of the reaction and may related to the dipole moment and also the hydrogen-bonding ability of protic solvents.

The spectroscopic data confirmed the formation of 4a. The X-ray crystallographic data of compound 4a confirmed the structure of the product (Figure 2). Meanwhile, via hydrogen bridges and the solvent molecules (water and ethanol) the molecules build pairs with π–π stacking of the aromatic systems.

To examine the scope and generality of our reaction, other (arylhydrazono)methyl-4H-chromen-4-ones were synthesized and their reaction with different primary amines and malononitrile were examined and compounds 4a–m were formed. The results are summarized in Figure 3. In another experiment, the model reaction of (arylhydrazono)methyl-4H-chromen-4-one (1a), phenylethylamine (2b), and malononitrile (3) were investigated in ethanol at room temperature. The formed precipitate was collected as the sole product and the spectroscopic data were investigated and showed that the product is identified as the fused heterocyclic pyridinochromane 5a. This confirmed that the final cyclization needs basic reaction conditions.

The synthesized (arylhydrazono)methyl-4H-chromen-4-ones 1a–g have several electron-deficient centers such as at C-2, C-4 and C=N and are susceptible to different intramolecular and intermolecular ring formations.

It seems that a proposed mechanism could proceed initially through (arylhydrazono)methyl-4H-chromen-4-one as a suitable Michael acceptor that can react with benzylamine or any primary amine to produce the intermediate A. There is a conjugated system in intermediate A that allows malononitrile to attack through Michael addition and produces the intermediate B (Scheme 2). Due to the presence of acidic hydrogen in intermediate B, it is possible to form chromonyl-malononitrile conjugated system C and to eliminate the phenylhydrazine. Intermediate C is a highly potent Michael acceptor that may allow the addition of hydrazine to the nitrile group resulting in intermediate D that after elimination of water led to intermediate E and this intermediate in the presence of a base can be converted to the 4a–m after tautomerization. The compounds 5a–d were formed through the same procedure without the base and after air oxidation. To confirm the mechanism, the reaction was done under inert atmosphere and the products 5a–d were not formed. The reaction mechanism is shown in Scheme 2.

The chemical structures of the products 5a–d are shown in Figure 4.

Usually, to activate the nitrile group for cyclization reaction, the existence of Lewis acid, the addition of organolithium reagents or metal hexamethylenedisalazane is necessary. However, in this approach, the nucleophilic addition on the nitrile group and the cyclization was achieved without the addition of a catalyst [44]. This reaction possesses a highly atom economical character and requires only triethylamine (40 mol %) as a base in EtOH and provides fused heterocyclic backbones with high selectivity.

In conclusion, we have successfully established an efficient route toward the synthesis of a diverse array of fused heterocyclic skeletons through a domino reaction. We showed an interesting behavior of the base for the cyclization reaction and provided access to fused heterocycles pyrazolopyridines containing chromane. The same reaction without base led to the formation of pyridochromanes 5a–d. The presented procedure provides several advantageous features including domino reaction character, one-pot procedure, high selectivity, mild reaction conditions, the simplicity of operation, high atom-economy, and good to high yields.

General procedure for the synthesis of compounds 1a–g

General procedure for the synthesis of compounds 4a–m

To a 25 mL flask containing 3 ml ethanol, 1 mmol (arylhydrazono)methyl-4H-chromen-4-one derivatives (1a–g), 1.2 mmol primary amines (2a–d), 1.2 mmol malononitrile (3), and triethylamine amine (40 mmol %) were added and the mixture was stirred at room temperature for 8–12 hours. The progression of the reaction was monitored by TLC (eluent ethyl acetate/n-hexane 3:1). After completion of the reaction, the yellow precipitate (4a–m) was filtered and washed with water and ethanol. Yields: 65–80%.

General procedure for the synthesis of compounds 5a–d

In a 25 mL flask containing 3 ml ethanol, 1 mmol (arylhydrazono)methyl-4H-chromen-4-one derivatives (1a,b), 1.2 mmol amine derivatives or 4-chloroaniline (2a–c), and 1.2 mmol malononitrile (3) were added and the mixture was stirred at room temperature for 3–4 hours. The progress of the reaction was monitored by TLC (eluent ethyl acetate/n-hexane 1:2). After completion of the reaction, the yellow precipitate (5a–d) was filtered and washed with water and ethanol. Yields: 20–40%.

Saeed Balalaie thanks the Alexander von Humboldt Foundation for the research fellowship. We thank the Iran National Science Foundation (INSF, Grant No 97020936) for financial support.

© 2019 Navari et al.; licensee Beilstein-Institut.
This is an Open Access article under the terms of the Creative Commons Attribution License (http://creativecommons.org/licenses/by/4.0). Please note that the reuse, redistribution and reproduction in particular requires that the authors and source are credited.
The license is subject to the Beilstein Journal of Organic Chemistry terms and conditions: (https://www.beilstein-journals.org/bjoc) 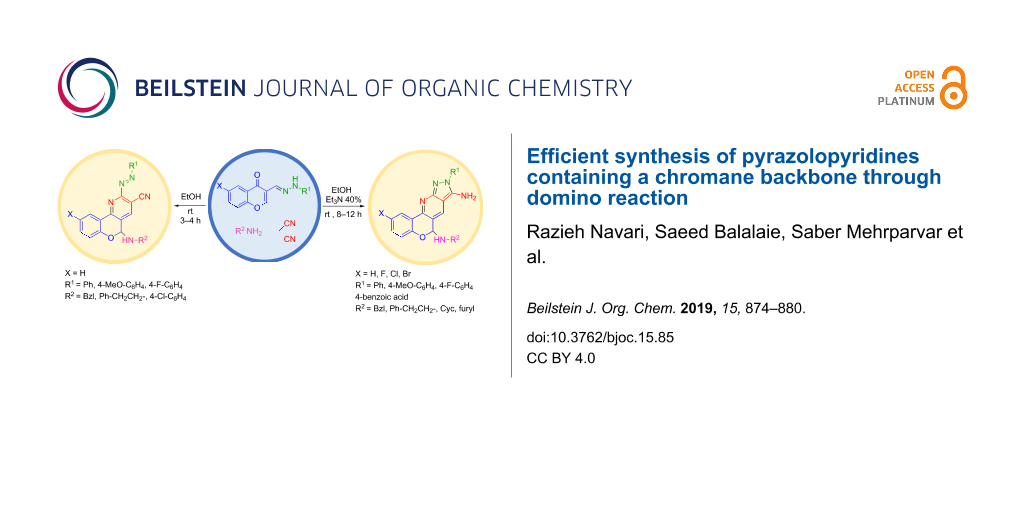