All articles from this author
Marius Friedrich

Herein, we present a facile synthesis of three azide-functionalized fluorophores and their covalent attachment as triazoles in Huisgen-type cycloadditions with model alkynes. Besides two ortho- and para-bromo-substituted benzaldehydes, the azide functionalization of a fluorene-based structure will be presented. The copper(I)-catalyzed azide–alkyne cycloaddition (CuAAC) of the so-synthesized azide-functionalized bromocarbaldehydes with terminal alkynes, exhibiting different degrees of steric demand, was performed in high efficiency. Finally, we investigated the photophysical properties of the azide-functionalized arenes and their covalently linked triazole derivatives to gain deeper insight towards the effect of these covalent linkers on the emission behavior.

Small organic luminophores exhibiting room-temperature phosphorescence (RTP) have attracted great attention due to promising applications in optoelectronic devices [1-8], biological imaging [9-12] and chemical sensing [13-15]. Referring to the Jablonski diagram (see Scheme 1a) [16,17], upon excitation from the singlet ground state (S0) to higher singlet states (Sn), followed by internal conversion (IC), either non-radiative or radiative decay to S0 can occur. While the latter decay (fluorescence) takes place without a change in the electron spin, phosphorescence is defined as the radiative transition from the lowest excited triplet state (T1) to the singlet ground state (S0) [18-21]. Triplet state excitons are generated by the spin-forbidden intersystem crossing (ISC) process from the first excited singlet state (S1). Pursuant to the El-Sayed rule (see Scheme 1b) [22,23], ISC is spin allowed from 1(n,π*) to 3(π,π*) and from 1(π,π*) to 3(n,π*) excited states, while ISC is spin-forbidden from 1(n,π*) to 3(n,π*) and from 1(π,π*) to 3(π,π*) excited states, owing to the poor orbital overlap, resulting in a decreased spin-orbit coupling.

Quenching processes of triplet states, induced by molecular motions, oxygen, or humidity, restrict the versatile application of such organic materials [24]. Thus, low temperatures [25-27] or inert conditions [28] are necessary to facilitate an afterglow emission.

Most phosphorescence studies are focused on metal complexes due to a strong heavy atom-induced spin-orbit coupling [29-33]. Considering the high price and the toxicity of many metal complexes, pure organic phosphors are highly desirable [16,17,34-37]. Two approaches are applied to achieve organic phosphors: (1) introduction of nonmetal heavy atoms, such as halogens (Br or I) or functionalities containing lone pairs, in particular carbonyl groups, nitrogen, sulfur, and phosphorus derivatives which facilitate the ISC process from S1 to Tn and thus increase the spin-orbital coupling [38-47]. Also, decreasing the singlet–triplet splitting energy (ΔEST) caused by intramolecular charge-transfer (ICT) interactions is an approved method [48,49]. (2) Significant reduction of non-radiative transitions can be achieved by the host–guest method [50-52] or by crystallization [53-57]. In difference to the liquid phase, the highly ordered packing and the restriction of molecular motions in the crystalline state favor a persistent luminescence.

The promotion of ISC processes through intermolecular halogen bonding to generate efficient RTP was initially investigated by Kim et al. [58]. They developed the minimalistic 2,5-dihexyloxy-4-bromobenzaldehyde (1) [59-63] which showed a weak fluorescence in solution, but exhibited a green phosphorescence with a quantum yield of ΦP = 2.9% in the crystalline state: this behavior was caused by intermolecular halogen bonds from the carbonyl-oxygen atom to an adjacent bromine atom (Figure 1a).

Despite multifarious examples of RTP in the crystalline state, purely organic compounds showing RTP in solution are rare [64-69]. Takeuchi et al. [28] reported a bromofluorenecarbaldehyde 2 which shows blue fluorescence in chloroform at 298 K under air and green phosphorescence under argon with a phosphorescence quantum yield of ΦP = 5.9% (Figure 1b). This observation is reasoned by a strong (π,π*) character of the T2 state.

Although phosphorescent organic compounds are well investigated with respect to their photophysical properties in the crystalline state, in solution or physically embedded in polymer matrices, there is a significant lack of possibilities [61] for their targeted covalent attachment to higher structures. This is due to missing synthetic strategies to incorporate suitable linkable functionalities into those luminophores.

Our group is highly interested in the de novo synthesis of small organic luminophores and in this regard, we recently developed efficient methods for the synthesis of ESIPT-based luminophores [70-72]. Herein, we present the efficient functionalization of derivatives of the potent luminophores 1 and 2 with “clickable” azide functionalities to target the structures 3–5 and further investigated the influence of this functionalization, both in the unlinked azide state and the linked triazole state, on the emission properties of these compounds (Figure 1).

Syntheses para- and ortho-bromobenzaldehyde 3 and 4

We initiated our synthetic investigations towards azide-functionalized para-bromobenzaldehyde 3 with a two-step sequence. Condensation with 2-amino-2-methylpropan-1-ol and oxidation with NBS yielded oxazoline 6 in a good yield. Directed ortho-metalation utilizing TMPMgCl·LiCl under mild conditions and subsequent smooth formylation with DMF afforded benzaldehyde 7 (see Scheme 2). Due to rapid decomposition of 7 under ambient and acidic conditions, rapid aqueous work-up was conducted, followed by reduction with NaBH4, yielding the corresponding primary alcohol 8 in 81% yield over two steps. The transformation to azide 9 was accomplished by deprotonation using 1,8-diazabicyclo[5.4.0]undec-7-ene (DBU) and reaction with diphenylphosphoryl azide (DPPA) in excellent yield. Finally, the oxazoline group, which acted as directing and protecting group, was removed in a three-step sequence of N-methylation, reduction of the in situ formed iminium ion and acidic hydrolysis. This afforded the azide-functionalized para-bromobenzaldehyde 3 in 78% yield and an overall yield of 56% (starting from 4-bromobenzaldehyde).

Azide-functionalized ortho-bromobenzaldehyde 4 was prepared by a similar route as aldehyde 3. Initially, oxazoline formation from 4-methylbenzaldehyde yielded 2-aryloxazoline 10 in almost quantitative yield. The introduction of the ortho-bromine substituent was again accomplished by metalation using TMPMgCl·LiCl and subsequent reaction with 1,2-dibromotetrachloroethane to afford 11 in 76% yield. A second bromination at the benzylic position provided the dibrominated derivative 12 in 66% yield. The substitution reaction of benzyl bromide with sodium azide delivered the primary azide 13 in quantitative yield. Again, the final back-conversion of the oxazoline group to the corresponding aldehyde afforded azide-functionalized ortho-bromobenzaldehyde 4 in 85% yield and an overall yield of 41% (starting from 4-methylbenzaldehyde).

The synthetic route to azide-functionalized 7-bromofluorene-2-carbaldehyde 5 started from unfunctionalized fluorene. Double bromination to 14, followed by double methylation of the methylene bridge to 15 and a lithiation/formylation sequence afforded 7-bromofluorene-2-carbaldehyde 16 in excellent yield over three steps. Conversion to the 2-aryloxazoline 17 was accomplished in 92% yield using the same method as described for the synthesis of 6 and 10. ortho-Metalation with TMPMgCl·LiCl [70] and conversion of the magnesiated species with DMF to carbaldehyde 18 was followed by reduction with NaBH4 to give the primary alcohol 19. In contrast to benzaldehyde 7, carbaldehyde 18 showed no decomposition at ambient temperature. While acidic hydrolysis of 19 provided exocyclic γ-lactone 20, the substitution reaction with DPPA/NaN3 yielded the primary azide in 87% yield. In accordance to previous deprotection reactions, fluorene 21 was converted by means of a three-step sequence to the desired azide-functionalized 7-bromofluorene-2-carbaldehyde 5 in 86% yield and an overall yield of 45% (starting from fluorene). The molecular structure of 5 could be verified by X-ray diffraction (XRD, see Scheme 3).

To gain deeper insights into the emission behavior of fluorenes bearing different functional groups in the side chains, fluorenylmethanol 19 was subjected to derivatization reactions (see Scheme 4). Deprotonation and subsequent methylation afforded methoxy derivative 22, which was then converted into the methoxy-functionalized 7-bromofluorene-2-carbaldehyde 23 in 75% yield. Implementation of potent leaving groups in the side chain as complement linkable functionalities via SN-reaction was initiated by mesylation. Unfortunately, the mesylated fluorene showed such a high reactivity that rapid decomposition occurred. However, bromination was conducted by various substitution methods delivering benzyl bromide 24, which upon isolation cyclized to iminium bromide 25 in high yield. To suppress this unexpected cyclization, careful fine-adjustment of the work-up conditions were made. Here, upon complete formation of 24, rapid filtration of the reaction mixture through a plug of neutral alumina, solvent evaporation and quick conversion in the next step was successfully applied. Deprotection to the carbaldehyde was performed using the well applied three-step methylation/reduction/hydrolysis sequence. Methylation of the oxazoline nitrogen afforded iminium salt 26, which was reduced to oxazolidine 27. Again, similar to 25, cyclization took place and ammonium triflate 28 was isolated in 56% yield (starting from 24). In contrast to the cyclization of oxazoline 24, oxazolidine 27 cyclized already during the reaction, caused by the increased basicity of the ring nitrogen.

We further investigated the reactivity of azide-functionalized bromocarbaldehydes 3, 4, and 5 in copper(I)-catalyzed azide–alkyne cycloaddition reactions (CuAAC). For this, we treated the azide-functionalized luminophores with alkynes exhibiting different degrees of steric demand, including 1-decyne (29), phenylacetylene (30), 1-ethynyladamantane (31) and 1,3-di-tert-butyl-5-ethynylbenzene (32, see Scheme 5). All triazoles 33–44, based on the bromocarbaldehydes 3, 4, and 5 were successfully isolated in excellent yields of >90%. As a further model functionalization, the sterically demanding adamantyl substituted triazole 42 was subjected to a methylation reaction with Meerwein′s salt (trimethyloxonium tetrafluoroborate) to deliver the N-methylated triazole 45 in 83% yield.

Finally, we examined the photophysical properties of both the azides and the triazoles. UV–vis absorption measurements of para-bromobenzaldehyde 3 and ortho-bromobenzaldehyde 4 as well as the corresponding triazoles 33–40 were conducted in chloroform. Intense absorption bands below 270 nm were observed, which could be attributed to typical π–π* transitions derived from the single-benzene core. In addition, unstructured absorption bands above 290 nm were observed, while ortho-derivatives exhibited more broadened bands than the para-derivatives (see Figure 2a and Figures S1–S11 in Supporting Information File 1). The emission spectra for para-bromocarbaldehyde 3 and adamantyltriazole 34 in the solid-state show maxima at 440 nm (for compound 3) and 416 nm (for compound 34) (see Figure 2b). Additionally, fluorescence lifetimes (τ) of 3 and 34 were determined by time correlated single photon counting (TCSPC), indicating low lifetimes of 2.21 ns (for compound 3) and 3.23 ns (for compound 34) for lower populated species (see Figure S6, Supporting Information File 1). Quantum yields (Φ) of both derivatives are below 1% in the solid-state. In chloroform, no luminescence was detected for the para derivatives. All ortho derivatives exhibited luminescence neither in solution nor in the solid-state [73].

These observations for the para- and ortho-bromobenzaldehydes indicate that the phosphorescence is quenched in these systems, yielding only a weak fluorescence. This may be owing to the azide moiety, either as a functional group or as part of the triazole heterocycle. Similar observations were already made for luminescent materials [74,75].

In summary, azide-functionalized ortho- and para-bromobenzaldehydes and fluorene derivatives were successfully synthesized. The azide bearing arenes were efficiently linked with even sterically highly demanding alkynes in CuAAC. Initial photophysical investigations of azide-functionalized bromocarbaldehydes and fluorenes revealed that the azide moiety and the triazole heterocycle efficiently quench phosphorescent transitions. Efforts of installing other functional groups suitable for covalent connections or modifications of the alkyl bridge between the arene and the azide are underway in our laboratories.

Naphthalonitriles featuring efficient emission in solution and in the solid state

Development of fluorinated benzils and bisbenzils as room-temperature phosphorescent molecules

© 2020 Göbel et al.; licensee Beilstein-Institut.
This is an Open Access article under the terms of the Creative Commons Attribution License (http://creativecommons.org/licenses/by/4.0). Please note that the reuse, redistribution and reproduction in particular requires that the authors and source are credited.
The license is subject to the Beilstein Journal of Organic Chemistry terms and conditions: (https://www.beilstein-journals.org/bjoc) 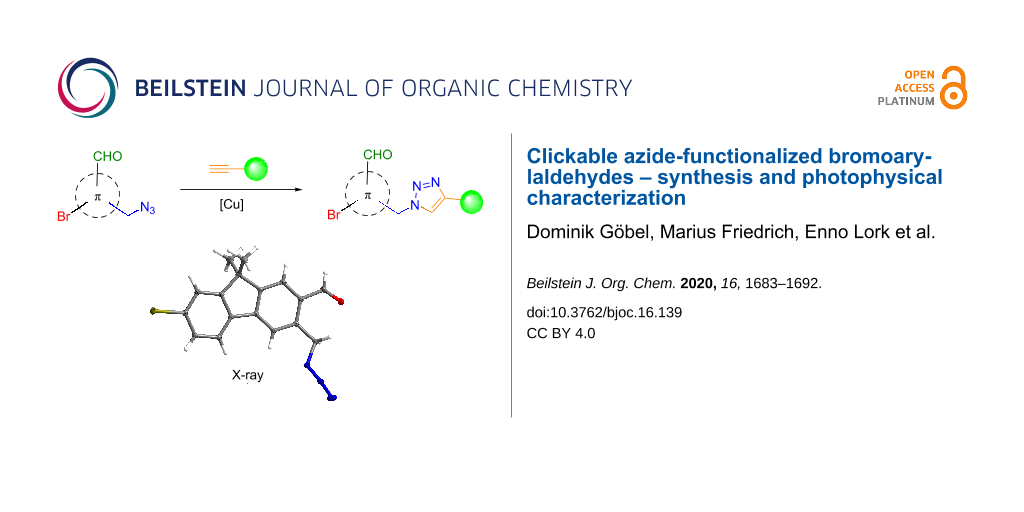