All articles from this author
Andrey N. Utenyshev


All articles from this author
Olga Yu. Karlutova

2-Benzo[b]thienyl fulgides and fulgimides containing bulky diphenylmethylene substituents were synthesized in the form of their ring-opened E- or Z-isomers. In contrast to the majority of known fulgides/fulgimides, that form colored ring-closed structures under UV irradiation, the obtained compounds undergo an irreversible transformation leading to decoloration of their solutions. This rearrangement with the formation of the dihydronaphthalene core appeared to be by 2–3 orders of magnitude more efficient than for the known diphenylmethylene(aryl(hetaryl))fulgides. The molecular structures of E- and Z-isomers and of products of the photoinduced rearrangement completed by 1,5-H shift reaction, 3a,4-dihydronaphtho[2,3-c]furans(pyrroles) C, were established based on the data of 1H and 13C NMR spectroscopy and X-ray diffraction studies.

Photochromic compounds are of considerable interest as molecular switches, elements of optical memory and molecular logic devices [1-4]. Fulgides and fulgimides possessing excellent thermal and photochemical stability, structurally modulated fluorescent properties and high quantum efficiencies of their light-induced pericyclic rearrangements constitute one of the most prospective and amply studied photochromic families [5-12]. A general approach to the synthesis of fulgides is based on a Stobbe condensation [13] of aromatic or heterocyclic aldehydes or ketones with methylene succinates followed by subsequent hydrolysis and dehydration processes. Under exposure of solutions or crystals of thus prepared hetaryl(aryl)-substituted dihydrofuran-2,5-diones to UV light, those bearing an isopropylidene fragment attached to the furandione moiety, usually demonstrate positive photochromism as the result of conversion to their deeply colored cyclic isomers. However, fulgides containing a diphenylmethylene group are capable of negative photoinduced rearrangements [14-17].

Comparison of the photochromic properties of aromatic and heteroaromatic fulgides revealed significant advantages of the latter for applications as molecular switches and optical information storage systems [5,10]. These include higher thermal stability, longer lifetimes of the photocolored forms and higher yields of the photocoloration reactions and better persistance to photodegradation. It has been shown that annulation of benzene rings to the five-membered rings of pyrryl, thienyl and furanyl fulgides can promote the additional improvement of these properties [10,18-21]. In accordance with these data, we have previously synthesized and studied the photochromic properties of 2-benzo[b]thienylfulgides [22]. UV irradiation of acetonitrile solutions of these compounds results in the electrocyclic hexatriene–cyclohexadiene rearrangement of the ring-opened isomers O into the colored ring-closed ones C (Scheme 1) which exhibit enhanced spectral characteristics as compared with 2-thienyl and 3-benzo[b]thienyl analogues. Exposure of the colored solutions to the visible light leads to the reverse conversion into the primary colorless hexatriene form.

Here, we report the synthesis of 2-benzo[b]thienylfulgides with bulky diphenylmethylene substituents and the investigation of their photoinduced rearrangements.

The Stobbe condensation of dimethyl 2-(diphenylmethylene)succinate with 1-methoxy- and 1-chlorobenzo[b]thiophene-2-carbaldehydes was used to obtain fulgides 3E and 7E, which led to the formation of intermediate monomethyl esters 1 and 5. These esters were hydrolyzed by 10% KOH in methanol into the corresponding fulgenic acids 2 and 6, which were purified and cyclized into 3E and 7E when treated with propionic anhydride. A special preparative method using a Sweko IP65 LED emitter was applied to convert the 3E-isomer into 3Z with a yield of 84%. The interaction of 3E with benzylamine in the presence of ZnCl2 and HMDS leads to the formation of a mixture of fulgimides 4E (41%) and 4Z (18%). Fulgides 3Z and 7E under similar conditions afford exclusively fulgimides 3Z and 7E, respectively, as the single products (Scheme 2 and Scheme 3).

According to IR, 1H and 13C NMR spectroscopy data Z- and E-isomers of fulgide 3 exist in the form of the open isomers O. This was also confirmed by X-ray diffraction study.

The molecular structures of fulgides 3Z and 3E are shown in Figure 1 and Figure 2.

Fulgides 3 and 7 and fulgimides 4 and 8 in acetonitrile absorb in the range of 316–329 nm (S2←S0 transition) and 405–436 nm (S1←S0 transition) (Table 1). The transition S1←S0 band in the E-isomers is usually much more intense than the S2←S0 band, whereas in Z-isomers an inverse ratio of intensities is observed. E-isomers absorb at longer wavelengths than Z-isomers.

aλabsmax, εmax – the absorption maxima and the molar absorption coefficients.

Under irradiation in acetonitrile solution with light of 365 nm fulgide 3E manifest negative photoinduced properties [23] due to the rearrangement into 4,4a-dihydronaphtho[2,3-c]furan-1,3-dione 9I and then undergoing a 1,5-hydrogen shift with the formation of the colorless ring-closed isomer 9C (Scheme 4, Figure 3).

However, the above described rearrangement drastically differs from those previously described due to its very high efficiency. The light-induced formation of the dihydronaphthalene core via 1,5-H shift has always been an extremely low-intensity process. Indeed, in the case of diphenylmethylene(aryl)fulgides the whole process (including the formation of a colored intermediate and its gradual decoloration) usually required 12–14 hours [14,17]. Even for the most similar in structure diphenylmethylene(indolyl)fulgide, the cyclization occurred only after extended irradiation (τ > 104 s) [16], whereas for fulgides 3Z and 3E this time is at least two orders of magnitude less (Figure 3).

9C represents the racemate (racemic compound) (3aR,4S)/(3aS,4R)-4-(3-methoxybenzo[b]thiophen-2-yl)-9-phenyl-3a,4-dihydronaphtho[2,3-c]furan-1,3-dione with cis-configuration of hydrogen atoms C(4)H and C(5)H. Two doublet signals of these protons at 4.49 and 5.37 ppm with characteristic spin–spin coupling constant J = 7.3 Hz are observed in the 1H NMR spectrum [24]. The photoinduced transformation is thermally and photochemically irreversible.

Although the appearance of 3Z and 4-(3-methoxybenzo[b]thiophen-2-yl)-9-phenyl-4,4a-dihydronaphtho[2,3-c]furan-1,3-dione (9I) shown in Scheme 4 was not directly registered in the absorption spectra (Figure 3), their existence was evidenced by the data obtained in earlier studies [5,6,14-16]. Moreover, the occurrence of the Z/E-photoisomerization concomitant of the first stage of the rearrangement can be traced at small irradiation times (less than 1–2 min) of fulgide 3Z in acetonitrile solution with light of 436 nm. As shown in Figure 4 a slight bathochromic shift of the 441 nm band accompanied by a typical redistribution of intensity of absorption bands (see Table 1) is detected. At longer irradiation times, the rearrangement processes are reflected by the spectral curves depicted in Figure 3.

The list of other bond lengths and valence angles of cis-9C’ is presented in Table S3 (Supporting Information File 1).

Similar to the initial fulgides, irradiation of acetonitrile solutions of fulgimides 4E and 8E with the light of 365 nm exhibits their negative photoinduced behavior caused by the formation of intermediate 4a,4-dihydro-1H-benzo[f]isoindol-1,3(2H)-diones 11I and 12I that rearrange in colorless ring-closed isomers 11C and 12C (Scheme 6, Figure 7). The observed transformations are thermally and photochemically irreversible.

To the best of our knowledge, this is the first example of an irreversible rearrangement of hetaryl fulgimide into colorless substituted dihydronaphthalene.

General: The 1H and 13C NMR spectra in CDCl3 were obtained on an integrated analytical LC-SPE-NMR-MS AVANCE-600 system from Bruker (600 MHz, 151 MHz for 13C) The signals were referred with respect to the signals of residual protons of deuterated solvent (7.24 ppm). The IR spectra were recorded on a Varian Excalibur 3100 FTIR instrument using the attenuated total internal reflection technique (ZnSe crystal). The electronic absorption spectra were recorded on a Varian Cary 100 spectrophotometer. The irradiation of acetonitrile solutions in quartz cells (l = 10 mm, V = 2.mL) with a high pressure Hg lamp (250 W) was performed on a Newport 66941 equipment supplied with a set of interferential light filters. The intensity of light was 3.3·1016 photons·s−1 for the spectral line 365 nm. For preparative purposes a Sweko IP65 (SUL-S1-20W-230-4000K-WH) LED emitter was exploited. Acetonitrile of spectroscopic grade (Aldrich) was used to prepare solutions. Melting points were determined on a PTP (M) instrument.

X-ray diffraction study: The X-ray diffraction studies of crystals of 3Z, 3E and 9 were performed with a Bruker XSCANS device (λ(Мо Кα) = 0.71073 Å, \w scans). Bond lengths and valence angles of 3Z, 3E and 9 are presented in Tables S1–S3 (Supporting Information File 1). The main crystallographic data and characteristics are in Table S4 (Supporting Information File 1). The semi-empirical absorption correction based on equivalent reflections was applied. The structure was solved by direct methods [25] and refined by full-matrix least-squares technique on F2 with anisotropic displacement parameters for non-hydrogen atoms. The hydrogen atoms were localized in the difference-Fourier map and included in the refinement with fixed positional (riding model) and isotropic displacement parameters. All calculations were carried out using the SHELXTL program suite [26]. CCDC 1951883, 1951883 and 1951885 contain the supplementary crystallographic data for the 3Z, 3E and 9, respectively. These data can be obtained free of charge via http://www.ccdc.cam.ac.uk/conts/retrieving.html, or from the Cambridge Crystallographic Data Centre, 12 Union Road, Cambridge CB2 1EZ, UK; fax: (+44) 1223-336-033; or e-mail: deposit@ccdc.cam.ac.uk.

© 2020 Rybalkin et al.; licensee Beilstein-Institut.
This is an Open Access article under the terms of the Creative Commons Attribution License (http://creativecommons.org/licenses/by/4.0). Please note that the reuse, redistribution and reproduction in particular requires that the authors and source are credited.
The license is subject to the Beilstein Journal of Organic Chemistry terms and conditions: (https://www.beilstein-journals.org/bjoc) 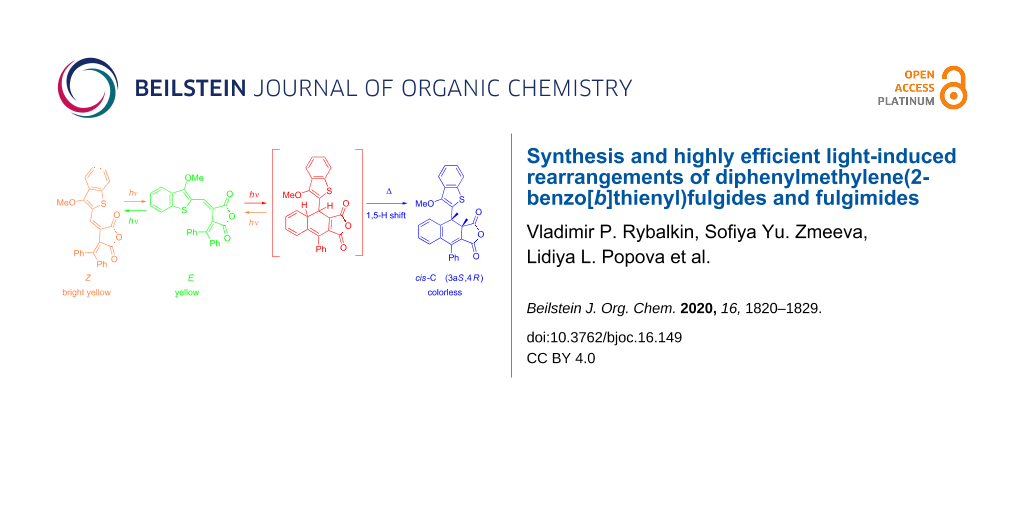