All articles from this author
Craig S. Donald


All articles from this author
Rodolfo Marquez

A fast, protecting-group-free synthesis of dihydropyridinones has been developed. Starting from commercially available aldehydes, a novel one-pot amidoallylation gave access to diene compounds in good yields. Ring-closing metathesis conditions were then employed to produce the target dihydropyridinones efficiently and in high yields.

Six-membered nitrogen heterocycles are prevalent in many naturally occurring and biologically active compounds. As a result, their synthesis has received extensive research and wide spread publication in the literature [1-6]. Dihydropyridinones are an important subclass of heterocycles, which often feature both as useful intermediates, and as interesting species in their own right [7-13].

Our approach to the synthesis of the dihydropyridinone framework was inspired by the work carried out by Veenstra and co-workers, who developed a one-pot, three-component reaction to produce protected homoallylic amines 4 (Scheme 1) [19].

It was reasoned that adaptation of the Veenstra protocol would allow us to introduce a second alkene unit during the same process, thus generating a ring-closing metathesis precursor in a single step. This general strategy towards nitrogen heterocycles has been utilized in several reports [20-23], including asymmetric variants [24,25], but in these cases the ring-closing metathesis precursor was always generated in multiple steps.

In order to test this hypothesis, acrylamide was used in an analogous manner to the carbamates employed by Veenstra (Scheme 1) [19]. In our initial attempts, the solvent was changed from dichloromethane to acetonitrile due to solubility issues with the acrylamide and the postulated imine intermediate. The reaction proved sluggish, taking four days to reach completion; however, the dialkene 5 was isolated in a very encouraging 66% yield (Scheme 2).

In an attempt to increase the yield of the overall process, the reaction conditions were optimized to reach complete formation of imine 6, before treatment with allyltrimethylsilane to generate the desired product. This stepwise addition was successful in affording an improved 88% yield of diene 5 as well as significantly reducing the overall reaction time (Scheme 3).

Treatment of diene 5 under ring-closing metathesis conditions, using Grubbs I catalyst, then proceeded to generate the target dihydropyridinone 7 in excellent yield (Scheme 4) [20-23,26].

The scope of this concise two-pot methodology was then investigated by using a variety of different aldehydes as starting materials (Figure 2). The electron-donating aromatic substrates and the aliphatic units gave consistently high results over the 2-pot process, producing dihydropyridinones 9a and 9c–e in high yields. The electron-withdrawing substituted aromatic starting materials on the other hand, gave a low yield in the first step, which we believe was due to poor solubility of the imine intermediate. In contrast, the ring-closing metathesis reaction worked nicely to give 9b in 99% yield.

Having demonstrated the versatility of our approach, the synthesis of racemic aza-goniothalamin was attempted. Our synthesis began with cinnamaldehyde (Scheme 5), which was condensed with acrylamide under the same conditions described above. Rewardingly, Hosomi–Sakurai allylation of the conjugated imine intermediate proceeded to afford the desired diene 10 in working yield (35%). The formation of diene 10 is significant as the corresponding α,β-enones and α,β-enals undergo exclusive conjugate addition under Hosomi–Sakurai conditions [27,28]. Ring-closing metathesis of diene 10 then proceeded in good yield (68%) to complete a fast and efficient, protecting-group-free, two-pot procedure for the racemic synthesis of aza-goniothalamin 1.

In summary, a two-pot, protecting-group-free procedure for the synthesis of dihydropyridinones has been developed. The process requires a one-pot amidoallylation followed by a ring-closing metathesis step. This approach was used to complete the racemic synthesis of aza-goniothalamin 1, and is currently being expanded to generate new biologically relevant derivatives.

We would like to thank the EPSRC and AstraZeneca for postgraduate support (T.C.) and for a Leadership Fellowship (R.M.). The authors also thank Dr. Ian Sword and the EPSRC (grant EP/H005692/1) for funding.

© 2020 Cogswell et al.; licensee Beilstein-Institut.
This is an Open Access article under the terms of the Creative Commons Attribution License (https://creativecommons.org/licenses/by/4.0). Please note that the reuse, redistribution and reproduction in particular requires that the authors and source are credited.
The license is subject to the Beilstein Journal of Organic Chemistry terms and conditions: (https://www.beilstein-journals.org/bjoc) 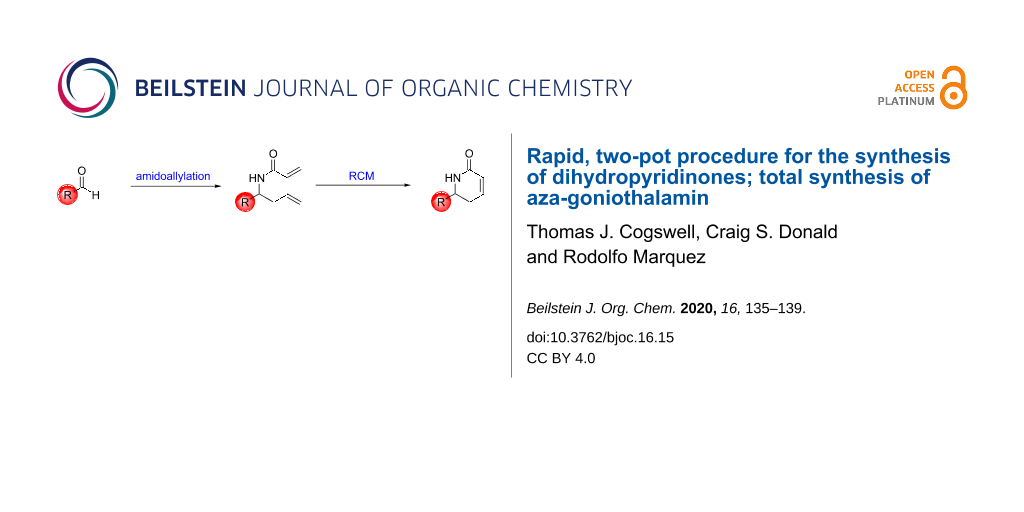