On the hydrolysis of diethyl 2-(perfluorophenyl)malonate

2-Phenylmalonic acid (1) and its esters are useful and versatile intermediates in the synthesis of many practically important compounds, e.g., pharmacologically active substances [1-5], in asymmetric synthesis and catalysis [6-8], as precursors of heterocyclic compounds [9-11], as ligands in coordination chemistry [12-16] and for other applications [17,18]. Incorporation of fluorine atoms into an organic molecule is known to be one of the most powerful tools for fine tuning of chemical and physical properties [19,20]. For example, thermal stability, solubility, metabolic and oxidative stability, lipophilicity, membrane permeability, complexing ability, acid-base, and many other properties can be modified in a broad range by fluorination (directly or indirectly) of initial organic molecules. In the ongoing project, we are interested in synthesizing 2-(perfluorophenyl)malonic acid (2, Figure 1) as a new ligand for the preparation of 3d and 4f heterometallic coordination compounds.

Hydrolysis of diethyl 2-(perfluorophenyl)malonate (3) unexpectedly turned out to be quite challenging. Unsubstituted diethyl or dimethyl 2-phenylmalonate can be readily hydrolyzed under basic conditions by heating with aqueous or mixed water–EtOH solutions [29] or in biphasic water–Et2O mixtures [30] under reflux conditions.

An exhaustive analysis of the literature revealed that virtually the same conditions were suitable for the hydrolysis of diethyl 2‐(2,6‐difluoro‐4‐methoxyphenyl)malonate (8) [31], dimethyl 2-(2-fluorophenyl)-2-methylmalonate (9) [32], diethyl 2-(3-fluorophenyl)-2-methylmalonate (10) [33], and diethyl 2-(4-fluorophenyl)malonate (11) [6,32] (Figure 2) with minor variations in the alkali concentration and temperature. No nucleophilic substitution of activated fluorine atoms or other side reactions were observed under the conditions mentioned above.

In preliminary experiments, we tested the mildest system – biphasic 10% KOH aqueous solution–Et2O at reflux temperature (35 °C) and vigorous agitation for the hydrolysis of diethyl 2-(perfluorophenyl)malonate (Scheme 3)

No reaction occurred under these conditions after 5 h of refluxing. Increasing the alkali concentration up to 20% did not induce a reaction. Different reaction conditions and bases were used, and the results are summarized in Table 1.

In general, one can conclude that under mild reaction conditions (room temperature, biphase mixtures) the starting ester remained intact, while under drastic conditions (high concentration of alkali, homogeneous solutions, elevated temperatures), decomposition and/or decarboxylation occurred. However, it is possible that decarboxylation took place during the isolation of the free acid. In all cases, no desired malonic acid 2 was isolated from the reaction mixtures; the main part of the original material was recovered. In some experiments, variable amounts of 2-(perfluorophenyl)acetic acid (12) were obtained after acidification of the basic solution. Moreover, noticeable decomposition of 3 was observed along with the formation of acid 12. The nature of these byproducts was not analyzed. Probably, they are formed by nucleophilic substitution of fluorine atoms in the perfluorophenyl moiety.

Acid 12 is fairly soluble in water and the separation of reaction products is cumbersome (see Supporting Information File 1). The structure of acid 12 in solid form was studied by single crystal X-ray diffraction experiments (Figure 3). The structural parameters were deposited at CCDC (deposit No. 1993963, see Supporting Information File 1 for details).

Since basic conditions seem to be unsuitable for the hydrolysis of diethyl 2-(perfluorophenyl)malonate, acid-catalyzed reactions were also tested. Trifluoroacetic acid (TFA) is a common reagent for the catalytic cleavage of tert-butyl esters, but in the stoichiometric quantity it is also suitable for the cleavage of nonvolatile methyl or ethyl esters due to transesterification [34,35]. The removal of highly volatile methyl or ethyl trifluoroacetates from the reaction mixture is the driving force of this process. Unfortunately, 2-(perfluorophenyl)malonate does not react with excess TFA (up to 10 equivalents) even under reflux conditions, but in one experiment a catalytic amount of concentrated H2SO4 was added, and then coincidentally the reaction mixture was slightly overheated (to 100 °C), which led to the evaporation of the entire acid. The remaining solid was identified as 2-(perfluorophenyl)acetic acid (12). We believe that 2-(perfluorophenyl)acetic acid might be formed by thermal decarboxylation of the desired 2-(perfluorophenyl)malonic acid. To prove this hypothesis, 2-(perfluorophenyl)malonate (3) was heated under reflux conditions with an excess of 48% aqueous HBr solution according to the method described in [36], but only traces of 2-(perfluorophenyl)acetic acid (12) were isolated after 16 h of reflux along with the unchanged original ester. In addition, considerable darkening of the biphase reaction mixture was observed. To overcome the problem of miscibility of the ester and acid, AcOH was used as a co-solvent. After some optimization of the reaction conditions, it was found that best results were achieved if a 1:5 v/v mixture of 48% HBr and glacial AcOH was used. The starting ester is fully soluble in this mixture, and the reaction occurs in a homogeneous solution (Scheme 4).

Unfortunately, in all experiments hydrolysis was accompanied by complete decarboxylation, and only 2-(perfluorophenyl)acetic acid (12) was separated from the reaction mixtures. The results of the acidic hydrolysis are summarized in Table 2. It seems that 2-(perfluorophenyl)malonic acid (2) is unexpectedly thermally unstable, because as a rule, decarboxylation of other phenylmalonic acids with strong electron-withdrawing groups required much higher temperatures (160–200 °C) or the presence of a catalyst [31,37].

This work was financially supported by the Russian Science Foundation (Project №19-13-00272).

© 2020 Taydakov and Kiskin; licensee Beilstein-Institut.
This is an Open Access article under the terms of the Creative Commons Attribution License (http://creativecommons.org/licenses/by/4.0). Please note that the reuse, redistribution and reproduction in particular requires that the authors and source are credited.
The license is subject to the Beilstein Journal of Organic Chemistry terms and conditions: (https://www.beilstein-journals.org/bjoc) 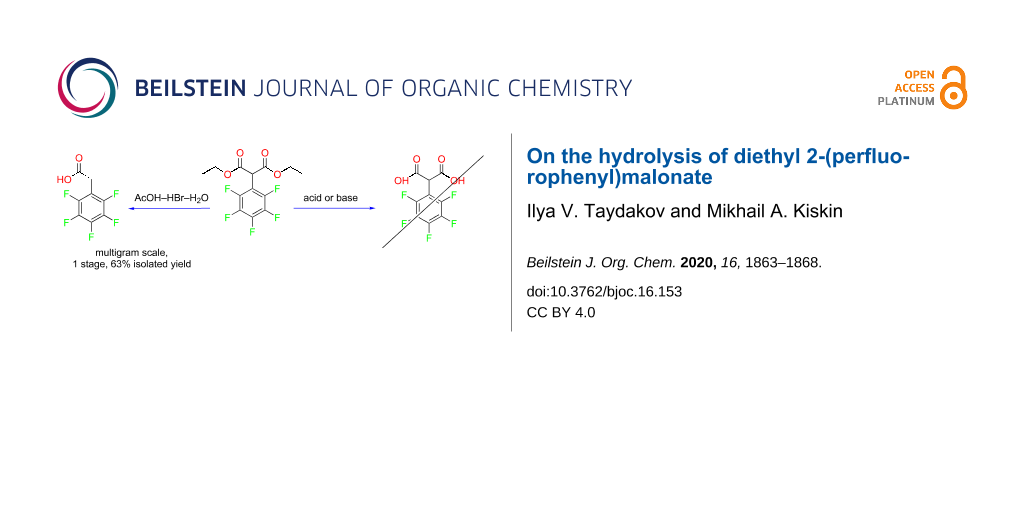