All articles from this author
Guanqun Xie


All articles from this author
Xiaoxia Wang

A variety of chroman-4-ones bearing phosphine oxide motifs were conveniently synthesized from readily available diphenylphosphine oxides and alkenyl aldehydes via a metal-free tandem phosphinoylation/cyclization protocol. The reaction utilizes K2S2O8 as oxidant and proceeds in DMSO/H2O at environmentally benign conditions with a broad substrate scope and afforded the title compounds in moderate yields.

The chroman-4-one framework is a privileged structural motif found in numerous natural products and pharmaceuticals with extraordinary biological and pharmaceutical activities such as anticancer activities and anti-HIV activity among others (Figure 1) [1-3]. Therefore, the preparation of functionalized chroman-4-one derivatives has attracted great attention of experts and scientists in the field of organic synthesis and pharmaceutical sciences over the last few years [1,4,5]. In general, chroman-4-one derivatives could be obtained via a polarity reversal strategy enabled by the N-heterocyclic carbene (NHC)-catalyzed intramolecular Stetter reaction [6-8]. Besides, chroman-4-one derivatives were also constructed via intramolecular oxa-Michael additions of 2’-hydroxychalcones [9,10], or through condensation cyclization reactions of o-hydroxyacetophenones with ketones/aldehydes [11,12], in addition to other alternative transformations [13,14]. Moreover, radical cascade cyclizations of o-allyloxybenzaldehydes by employing appropriate radical precursors through visible-light promoted systems [15,16], transition-metal-catalyzed systems [17,18], or transition-metal-free systems [19,20], have emerged as a powerful strategy for the synthesis of diversely functionalized chroman-4-one derivatives.

Organophosphorus compounds are well-known for their medicinal, biological, or specific material-related properties and have found wide applications in pharmaceutical chemistry, biochemistry, and materials science [21-26]. They represent also excellent ligands for many metals and have been used in catalytic systems for a huge number of organic reactions [21-26]. Due to the importance of the chroman-4-one scaffold on one hand and that of organophosphorus compounds on the other, the development of concise and efficient approaches for the synthesis of chroman-4-one derivatives decorated with phosphorus functionalities [27,28], thus combining the characteristics of both components in one molecule may find useful applications. However, there are only few ways to prepare such compounds. For example, in 2008 Rovis et al. [27] reported an intramolecular Stetter reaction of alkenyl aldehydes to synthesize a series of phosphine oxide and phosphonate-functionalized chroman-4-ones. Unfortunately, the preparation of the substrates involved a Rh-catalyzed hydrophosphinylation of a protected functional alkyne, and the subsequent deprotection with Hg(O2CCF3)2, which is not environmentally benign (Scheme 1a). Besides, in 2016 Li’s group [28] reported a silver-catalyzed straightforward approach for the synthesis of phosphonate-functionalized chroman-4-ones via a phosphoryl radical-initiated cascade cyclization of 2-(allyloxy)arylaldehydes using K2S2O8 as an oxidant, however, diphenylphosphine oxide (DPPO) was not suitable for the transformation (Scheme 1b). So the development of metal-free and greener methods to approach chroman-4-ones bearing a phosphine oxide moiety is still highly desirable. Herein, we present a transition-metal-free radical cascade cyclization to access the desired chroman-4-one derivatives in one pot under environmentally benign conditions (Scheme 1c).

Motivated by the desire to develop a metal-free and environmentally benign protocol for the construction of phosphine oxide-functionalized chroman-4-ones, we focused on the cascade cyclization employing 2-(allyloxy)benzaldehyde (1a) and diphenylphosphine oxide (DPPO, 2a) as the model substrates with K2S2O8 as the oxidant, which is a cheap, readily available, and versatile oxidant. On the basis of literature reports [29,30] and our continuing interest in green chemistry [31,32], we set the temperature at 70 °C based on the fact that K2S2O8 thermally decomposes forming sulfate radicals (SO4·−) [29,30], which may react with the substrates to furnish such a cascade cyclization. To our delight, the anticipated product 3aa was obtained in 42% yield in DMSO/H2O (4:1) as reaction medium in one pot (Table 1, entry 1). The structure of 3aa was unambiguously confirmed by X-ray diffraction analysis of a single crystal (Figure 2) and by NMR spectroscopy (see Supporting Information File 1) [33]. The increase of the amount of K2S2O8 to 3 equiv resulted in the improvement of the yield of 3aa to 52% (Table 1, entry 2). However, adjusting the amount of the oxidant K2S2O8 to 4 equiv (Table 1, entry 3) did not further improve the yield. By further screening of a few solvents, such as MeCN/H2O, DMF/H2O, DMA/H2O, dioxane/H2O, THF/H2O, EtOH/H2O, DCE/H2O, and NMP/H2O, it turned out that the highest yield was achieved in the DMSO/H2O (4:1) system (Table 1, entries 4–13). It is notable that product 3aa was not observed at room temperature or in the absence of K2S2O8, indicating that the reaction was mainly mediated by K2S2O8 (Table 1, entries 14 and 15). Increasing the reaction temperature to 80 °C afforded better product yields as compared with the reactions performed at either 70 °C or 90 °C (Table 1, entries 2, 16, and 17). Then, various oxidants such as (NH4)2S2O8, Na2S2O8, TBHP (tert-butyl hydroperoxide), DTBP (di-tert-butyl peroxide), and dioxygen were tested and the results showed that K2S2O8 exhibited the best efficiency (Table 1, entries 18–22).

With the optimal reaction conditions in hand (Table 1, entry 16), we next explored the scope and generality of this protocol using various 2-(allyloxy)arylaldehydes 1 for the reaction with 2a. As shown in Scheme 2, substrates 1 with a range of functional groups, such as electron-donating groups Me- (1b and 1c), t-Bu- (1d and 1e), and electron-withdrawing groups Cl- (1f), Br- (1g), and F- (1h) were well tolerated in this transformation, providing the desired products 3aa–ha in 48–62% yields. Furthermore, the transformation also proceeded with naphthyl substrate 1i giving the desired product 3ia in 45% yield. Notably, when the substrate was 2-allylbenzaldehyde (1j), the protocol was also compatible affording the indanone derivative 3ja with comparable yield. This outcome is of special interest, because indanone derivatives are also privileged structural motifs found in numerous natural products and pharmaceuticals with extraordinary biological and pharmaceutical activities [34,35]. However, no desired product (3ka) was obtained when there was a nitro group in the substrate (1k). Then, N-allyl-N-(2-formylphenyl)-4-methylbenzenesulfonamide (1l) was examined in the cascade cyclization and the desired products 3la, 3lf were obtained in 44% and 40% yield.

Next, to further demonstrate the generality of this strategy, the scope of different diphenylphosphine oxide 2 was examined as shown in Scheme 3. Simple diphenylphosphine oxides, such as 2-Me-DPPO (2b), 4-Me-DPPO (2c), and 4-t-Bu-DPPO (2d) furnished the corresponding products in good yields. Also multisubstituted diarylphosphine oxides 2e and 2f were well tolerated under these reaction conditions. Gratifyingly, diphenylphosphine oxides bearing fluoro-substituents (2g) reacted smoothly furnishing the anticipated product 3ag in 58% yield. Furthermore, 1-naphthyl-DPPO (2h) was also suitable for this transformation, and afforded the expected product 3ah in 50% yield. The reaction between diethyl phosphonate (2j) and 1a proceeded less efficiently under the conditions and a low yield of 3aj was obtained. Dimethylphosphine oxide (2k) did not participate in the reaction, likely due to its high oxidation potential and poor ability to undergo tautomerization [36].

To demonstrate the practicability of this methodology, a gram-scale experiment was next performed, employing 1b and 2a as substrates under the optimized conditions (Scheme 4). The reaction afforded the desired product 3ba in a good yield of 56%, and the structure was also confirmed by X-ray diffraction (see Supporting Information File 1) [33].

To gain an insight into the reaction mechanism, we carried out some control experiments (Scheme 5). When the reaction was conducted in the presence of radical scavengers such as 2,2,6,6-tetramethyl-1-piperidinyloxyl (TEMPO) and butylated hydroxytoluene (BHT), the reactions were completely shut down, which indicated that the reaction proceeds through a radical pathway [37-41]. Also, we successfully separated a small amount of byproduct 4 which was identified by NMR spectroscopy. These experiments clearly support a phosphorus-centered radical reaction pathway. It has been reported that phosphorus-centered radicals could be generated from phosphine oxides in the presence of potassium persulfate [42-44]. Based on literature precedent [29,30,42-46] and preliminary mechanistic experiments, a plausible mechanism was proposed in Scheme 5 which was different from the predominant mechanism observed in the Ag-catalyzed radical cascade for the preparation of phosphonate-functionalized chroman-4-ones [28]. Initially, K2S2O8 thermally decomposes to form sulfate radical anions (SO4•−) [29,30], which react with diphenylphosphine oxide (DPPO, 2) to give the phosphorus-centered radical I [42-44]. Then, the phosphorus centered radical I added to the C–C double bond of 1 to generate a new carbon-centered radical II, with sequential attack on the aldehyde group. The oxygen radical III thus formed undergoes a formal 1,2-H shift to generate the benzyl radical IV [45,46]. Finally, hydrogen abstraction by the sulfate radical anion (SO4•−) from the benzyl radical IV affords the final products 3 [45,46].

In summary, an environmentally benign and practical radical cascade cyclization was developed to synthesize a series of phosphonate-functionalized chroman-4-ones from 2-(allyloxy)benzaldehydes and diphenylphosphine oxides. This protocol proceeds under metal-free conditions and uses cheap K2S2O8 as oxidant with easy handling and a broad substrate scope. The reaction proceeds through a radical phosphinoylation–cyclization via a tandem C–P and C–C-bond formation.

© 2020 Liu et al.; licensee Beilstein-Institut.
This is an Open Access article under the terms of the Creative Commons Attribution License (http://creativecommons.org/licenses/by/4.0). Please note that the reuse, redistribution and reproduction in particular requires that the authors and source are credited.
The license is subject to the Beilstein Journal of Organic Chemistry terms and conditions: (https://www.beilstein-journals.org/bjoc) 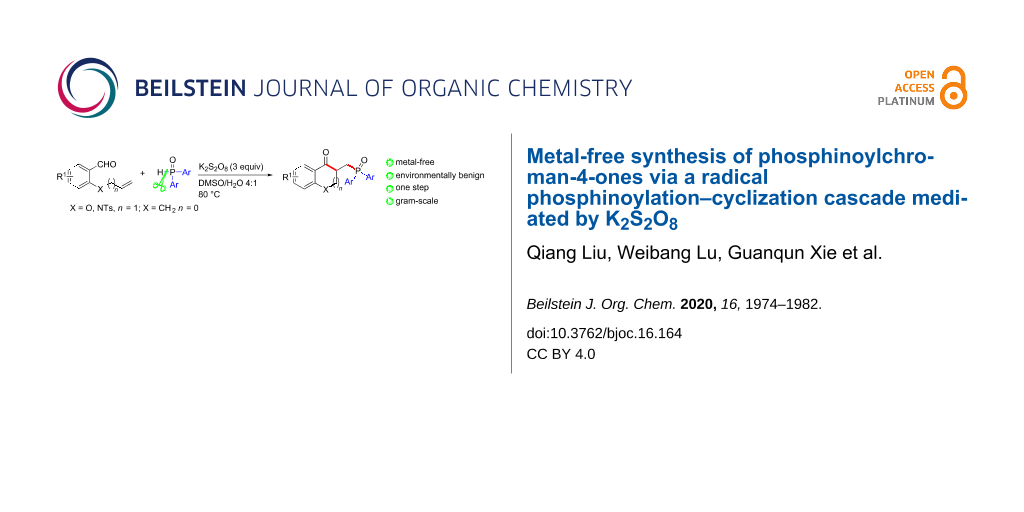