All articles from this author
Raju Ranjith Kumar

The reactivity of α-azidochalcones has been explored for the preparation of highly substituted oxazoles via a 2H-azirine intermediate. The azidochalcones, when treated with potassium thiocyanate in the presence of potassium persulfate, lead to 2,4,5-trisubstituted oxazoles in good yields. Incidentally, 2-aminothiazoles are the products when ferric nitrate is employed instead of persulfate in the above reaction.

Vinyl azide is one of the most versatile and potent building blocks explored in the synthesis of several heterocycles [1-5]. It can undergo photolysis or thermolysis to afford highly strained three-membered 2H-azirine, which can act as the precursor for nitrogen heterocycles. As a part of our synthetic design towards the construction of five-membered heterocycles, we have previously reported the synthesis of highly substituted imidazoles [6], indoles [7] and pyrroles [8] starting from different azidochalcones. In continuation, employing α-azidochalcones as the precursor [9], we herein report the preparation of highly substituted oxazoles and thiazoles.

Oxazoles are ubiquitously found in various natural products [10-14], pharmaceuticals [15-18], functional materials [19,20] as well as in several organic building blocks [21-26]. Some oxazoles play a significant role in biological properties such as TRPV1 antagonistical activity, antifungal, analgesic, anti-inflammatory, antiproliferative, antileukemia, anticancer [27-32] and enzyme inhibitory activities [33-42]. 2,4,5-Trisubstituted oxazoles are embedded in some natural products and pharmaceuticals with a broad range of biological activities prompting the development of efficient synthetic strategies for this useful heterocycle [43,44] (Figure 1).

In the recent past, the readily accessible 2H-azirine, an efficient source of nitrogen, was employed as starting material for the synthesis of oxazole with various coupling partners such as aldehyde, trifluoroacetic acid, etc. [8,45-50] (Scheme 1).

Thiazole is a common structural motif that is found in a wide variety of naturally existing alkaloids and a number of pharmaceutically active compounds [51-53]. 2-Aminothiazole has a thiourea-like character with a tendency to modulate promiscuously multiple biological targets. Thiazole derivatives also exhibit a broad spectrum of biological activities including antiviral, antiprion, anti-inflammatory, antimicrobial, anitubercular, psychotropic and anticancer [54-60]. The marketed cancer drug dasatinib [61] continues to prove its worth.

In this work, it is shown that highly substituted oxazoles and aminothiazoles could be accessed directly from the reaction of substituted α-azidochalcones with potassium thiocyanate. Thiocyanate is a known ambident reagent with two potential sites of attack, enabling the selective and efficient construction of C–C and C–N bonds towards biologically important heterocyclic skeletons [62-64].

Previously, we have reported the TMSOTf-catalyzed synthesis of highly substituted imidazoles from α-azidochalcones under mild conditions [65]. As a sequel, the synthesis of oxazoles with an arylimino substituent has been accomplished in this work. The biologically important arylimino group [66-69] integrated with a highly substituted oxazole skeleton with a thiol group is expected to have potential synergetic bioactivity [70].

During the exploration of the reactivity of azidochalcones with thiocyanate in the presence of the oxidizing agent, 1i was chosen as the model α-azidochalcone to react with potassium thiocyanate 2 in the presence of several oxidants and metal salts (Table 1). The initial attempts employing iodine, CAN and ZnCl2 upon refluxing in acetonitrile for 6 hours did not yield any product (Table 1, entries 1, 2 and 4).

As shown in Scheme 2, an efficient conversion of α-azidochalcones 1a–u to highly substituted functionalized oxazoles 3a–u has been achieved with both electron-poor and electron-rich aryl substituents. Both nitro- and bromo-substituted systems can be further functionalized to get a new set of products. The tolerance of the reaction for a variety of aryl substituents illustrates the generality of this method for the preparation of a range of highly substituted oxazoles. Further, the scalability of the reaction using an optimized protocol was investigated by conducting the reaction on a multigram scale (Scheme 3). It was found that the reaction between 1i and 2 on a multigram scale proceeded to afford 3i in 97% yield.

The structure of the product and the site of acetylation was confirmed by X-ray crystallography of a single crystal of 5 [71] (Figure 3).

The methylated and benzylated derivatives 6 and 7 were also obtained from 3m. S-Methylation of 3m was achieved in 91% yield with methyl iodide in the presence of NaH/THF and the S-benzylation has been carried out by a similar procedure (Scheme 5).

Based on these experiments, the following plausible mechanism for the formation of 2,4,5-trisubstituted oxazoles can be proposed (Scheme 7). It is known that the thiocyanate radical is generated from potassium thiocyanate by the reaction with potassium persulfate [72]. The N-end of thiocyanate radical reacts with the C=N bond to give the intermediate A which undergoes homolytic cleavage yielding B. Subsequent cyclisation results in the oxazole ring.

During these optimization trials, it was interesting to note the formation of 2-aminothiazole, when ferric chloride was employed along with thiocyanate (Table 1, entry 3). There is a report pertaining to this transformation with Fe(II) salts [73]. We further wanted to capitalize on this result and optimize the methodology to access a series of 2-aminothiazoles as the reported methods [74-79] to access 2,4,5-trisubstituted aminothiazoles, especially 4-aroyl-2-amiothiazoles, suffered from low yields, harsh reaction conditions, expensive and detrimental metal precursors as well as the pollution concerning α-halocarbonyl compounds.

Initially, we started the reaction with (Z)-2-azido-1,3-bis(4-chlorophenyl)prop-2-en-1-one (1d) and commercially available potassium thiocyanate (2) as a representative model system. To optimize the best reaction condition, we began this study by performing the reaction with ferric chloride in acetonitrile at 80 °C for 6 h (Table 2, entry 1).

Using the optimized experimental conditions, the Fe(III)-mediated formation of 4,5-disubstituted 2-aminothiazoles 4 was examined for the substrate scope (Scheme 8).

All the synthesized compounds 4a–l were confirmed by 1D and 2D NMR, IR spectroscopy and HRMS techniques. Additional evidence of the structures of these compounds was obtained based on the single-crystal X-ray analysis of 4h [71] (Figure 4).

In conclusion, we have demonstrated selective routes for the synthesis of highly substituted oxazoles and 2-aminothiazoles from α-azidochalcones and potassium thiocyanate employing potassium persulfate and ferric nitrate, respectively. This new route gains a streamlined workup and the elimination of air-sensitive techniques to afford the product in good yield in a greener medium over a short time frame. The current method involves a broad substrate scope, excellent functional group tolerance and leaves the active site for further synthetic transformation. The overall strategy allows the generation of new C–N and C–O bonds in one-pot.

General considerations: The melting points reported in the work are uncorrected. Unless stated otherwise, solvents and chemicals were obtained from commercial sources and used without further purification. Infrared spectra were recorded on a Perkin Elmer instrument with neat sample and only major peaks are reported in cm−1. The 1H and 13C NMR spectra of the new compounds were measured at 400 MHz and 100 MHz, respectively, using Bruker and JEOL NMR instruments in DMSO-d6. Chemical shifts are reported in parts per million (δ), coupling constants (J values) are reported in Hertz (Hz) relative to tetramethylsilane. Spin multiplicities are indicated by the following symbols: s (singlet), d (doublet), t (triplet), m (multiplet), dd (doublet of doublets), td (triplet of doublets), ddd (doublet of doublets of doublets), bs (broad singlet). Mass spectra were measured with Micromass Q-Time of flight (HRESIMS).

General procedure for the preparation of 3: To a solution of azidochalcone 1 (1 mmol) in dry acetonitrile (2 mL) were added potassium thiocyanate 2 (3 mmol) and potassium persulfate (0.5 mmol). The mixture was stirred magnetically at reflux temperature for 6 hours under nitrogen atmosphere. After completion of the reaction (monitored by TLC), the solid that separated was filtered, washed with water and acetonitrile and recrystallized with cold diethyl ether to obtain pure yellow product 3.

General procedure for the preparation of 4: To a solution of azidochalcone 1 (1 mmol) in dry acetonitrile (2 mL) were added potassium thiocyanate 2 (3 mmol) and ferric nitrate (0.5 mmol). The reaction mixture was stirred magnetically at reflux for 6 h. After completion of the reaction (monitored by TLC), the product was diluted with water, extracted with ethyl acetate (15 mL) and purified by column chromatography (100–200 mesh silica gel) using ethyl acetate/petroleum ether mixture to afford product 4.

© 2020 Harisha et al.; licensee Beilstein-Institut.
This is an Open Access article under the terms of the Creative Commons Attribution License (https://creativecommons.org/licenses/by/4.0). Please note that the reuse, redistribution and reproduction in particular requires that the authors and source are credited.
The license is subject to the Beilstein Journal of Organic Chemistry terms and conditions: (https://www.beilstein-journals.org/bjoc) 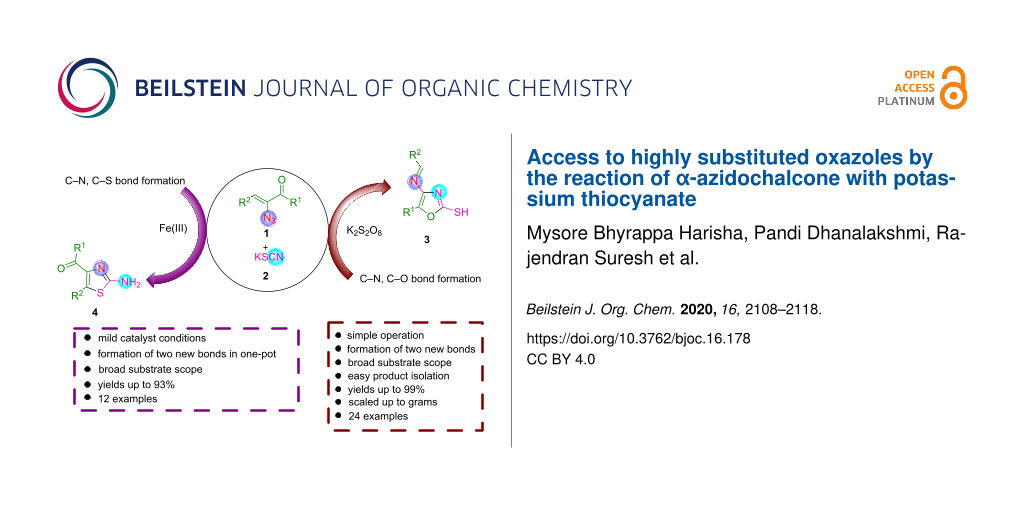