All articles from this author
Li Wang


All articles from this author
Yunqi Huang


All articles from this author
Haibo Mei


All articles from this author
Hiroyuki Konno

In the present work, arylethynes were studied as new C-nucleophiles in the asymmetric Mannich addition reactions with (S)-N-tert-butylsulfinyl-3,3,3-trifluoroacetaldimine. The reactions were conducted under operationally convenient conditions affording the corresponding Mannich adducts with up to 87% yield and 70:30 diastereoselectivity. The isomeric products can be separated using regular column chromatography to afford diastereomerically pure compounds. The purified Mannich addition products were deprotected to give the target enantiomerically pure trifluoromethylpropargylamines. A mechanistic rationale for the observed stereochemical outcome is discussed.

In recent years, substitution of hydrogen by fluorine atoms or fluorine-containing groups usually provides unexpected biological and physicochemical properties, which thus has become an established approach for the development of pharmaceuticals [1-9], agrochemicals [10-14], and advanced materials [15-19]. On the other hand, chiral propargylamine represents a very important type of organic intermediates, which has been successfully used in the synthesis of natural products and biologically relevant heterocyclic compounds [20-24]. Thus, fluorinated propargylamine, in particular, chiral trifluoromethylpropargylamine, should be considered of great research interest due to the apparently advantageous pharmaceutical profile of CF3-containing drugs [25,26]. For example, DPC 961 contains the trifluoromethylpropargylamine moiety and has been developed as the inhibitor against non-nucleoside reverse transcriptase for the treatment of human immunodeficiency virus [27] (Figure 1).

Thus, the development of synthetic methods for the preparation of these compounds, featuring trifluoromethylpropargylamine is of general research interest [28-32]. The asymmetric Ru/(R)-CPA-catalyzed chemoselectivie biomimetic reduction [33] and the organocatalytic transfer hydrogenation [34] of fluorinated alkynylketimines have been developed for the synthesis of fluorinated propargylamines in good yields and high enantioselectivities by the groups of Zhou and Peng, respectively (Scheme 1a). It should be mentioned that the Qing group also reported a method for the synthesis of α-trifluoromethylated α-propargylamines via a Ti-promoted addition reaction between acetylide and chiral CF3-ketimines (Scheme 1b) [35]. Based on our experience in the preparation of trifluoromethylated amino compounds [36-40] and the chemistry of N-tert-butylsulfinyl-3,3,3-trifluoroacetaldimine (1) [41-54], we noticed that the reactions of chiral imine 1 with yne nucleophiles have never been reported thus far. Accordingly, intrigued by this methodological deficiency, we decided to dedicate a special research project to this objective; herein, we report Mannich reactions between yne nucleophiles and aldimine 1 (Scheme 1c). The results reported in this work expand our knowledge of the reactivity of imines and the origins of stereocontrol, as well as provide synthetic access to a series of trifluoromethylpropargylamine of high biological interest.

Drawing from our previous studies on the chemistry of trifluoromethylated sulfinylimine 1 [41-54], the initial reaction conditions focused on the use of 1.3 equiv of 1-ethynyl-4-methoxybenzene (2a) in the presence of n-BuLi with CH2Cl2 as a solvent at −78 °C. The desired product 3a was obtained after 2.5 hours in 46% yield as a mixture of two diastereomers (55:45 dr, Table 1, entry 1). Fortunately, the diastereomeric products can be quite easily separated by regular column chromatography using hexane/EtOAc (4:1, v/v) as an eluent. Further optimization of the reaction conditions was then carried out to improve both the yield and diastereoselectivity. First, a series of pilot experiments in dichloromethane were performed to scan the base in the reaction. When using LDA and LiHMDS instead of n-BuLi, the yields were noticeably increased to 83% and 87%, respectively (Table 1, entries 2 and 3). In particular, the use of LiHMDS resulted in improved diastereoselectivity (69:31 dr, Table 1, entry 3). On the other hand, the solvent was found to show a significant effect on this transformation (Table 1, entries 4–6) and the results indicated dichloromethane was the best choice. Variation of the loading amount of 1-ethynyl-4-methoxybenzene (2a) did not provide any improvement on the chemical yield and the stereochemical outcome (Table 1, entries 7 and 8). We also observed a noticeable temperature effect on the reaction yield (Table 1, entries 9 and 10) and −78 °C was proved to be the best choice. Screening of the reaction time revealed that 2.5 hours were necessary for the completion of this transformation (Table 1, entries 11 and 12). Finally, we found that the use of Lewis acids BF3·Et2O and Ti(OiPr)4 as additives for this reaction was unsuccessful and the same level of chemical yield and diastereoselectivity was observed (Table 1, entries 13 and 14).

With the optimized reaction conditions in hand, we examined the generality of these asymmetric Mannich reactions by using various arylethynes 2 (Scheme 2). Under standard reaction conditions, all the tested substrates worked well to generate the corresponding Mannich adducts in moderate to good yields. In particular, ethynylbenzenes bearing electron-donating substituents on the aromatic ring were more compatible with this reaction, resulting in higher chemical yields (53–87%) and better diastereoselectivities (3a–g). The ethynylbenzene 2g featuring a long alkyl chain on para-position was also a suitable substrate, which was converted into product 3g in 77% yield. On the other hand, arylethynes bearing electron-withdrawing groups on the aromatic ring showed lower reactivity along with lower yields (31–55%) as well as poorer diastereoselectivities (3i–m), except for 3n which gave 70:30 dr. It should be mentioned that the position of substituents showed almost no effects on the reaction efficiency (3c vs 3d, 3i vs 3j, 3l vs 3m). Also, importantly, two diastereomers, in all the cases 3a–n, can be readily obtained in diastereomerically pure form by routine column chromatography, underscoring the value of this strategy for the synthesis of chiral α-trifluoromethylated propargylamines.

In general, the low-to-moderate diastereoselectivity observed in this study was unexpected. In fact, considering the excellent level (>90% de) of stereocontrol reported for the Mannich additions of aldimine 1 with sp3 [42,55] and sp2 [56] nucleophiles, including lithiated aromatics [57] one would not anticipate such a dramatic drop in the selectivity in the reactions of sp nucleophiles. Accordingly, we considered the mode of nucleophilic attack on the imine double bond in 1. As presented in Figure 3, imine 1 might react in the most stable conformation with the bulky tert-butyl group pointing away from the imine double bond. In this case the only stereocontrolling factor in play is the difference between the sulfinyl oxygen and the oxygen electron lone pair. The latter presents a lesser steric obstacle rendering the corresponding nucleophilic attack the more probable event.

These ever-unexpected results strongly suggest that the origin of the stereocontrol in the reactions of imine 1 is not just the bulk of the tert-butyl group but, as a major factor, the corresponding chelated transition states.

As all diastereomers 3 can be easily isolated in optical pure form by routine column chromatography, this reaction should be of certain value for biological studies. In this regard, we decided to demonstrate the reproducibility of this method for large-scale synthesis (Scheme 3) and the removal of the sulfinyl auxiliary to give the free amine (Scheme 4). To our delight, 1.4 g of the desired product 3a was obtained when the amount of sulfinylimine 1 was raised to 1.0 g (5.0 mmol). Comparing with reaction of 0.3 mmol scale, only a slight decrease in the yield was observed (84%) along with the same stereochemical outcome. Also, the chiral sulfinyl auxiliary can be easily removed under acidic conditions to give the free amine. Treating 3i with HCl gas in methanol at 0 °C, the tert-butylsulfinyl group was cleaved under mild conditions and the target primary amine 4 was obtained with 57% yield.

In conclusion, we have explored arylethynes as new nucleophiles for the Mannich reactions of (R)-N-tert-butylsulfinyl-3,3,3-trifluoroacetaldimine. Quite unexpectedly, the diastereoselectivity of the reactions were noticeably lower when compared with the corresponding reactions of sp3 and sp2 nucleophiles. Nevertheless, the two diastereomers can be easily isolated in diastereomerically pure state by regular column chromatography. This method provides access to chiral trifluoromethylpropargylamines. The application of these compounds for the synthesis of biologically relevant targets and their self-disproportionation of enantiomers (SDE) properties [58-60] are currently under study and will be reported in due course.

General procedure for the Mannich reaction of arylethynes with sulfinylimine: Into an oven-dried reaction vial flushed with N2 were taken the respective arylethyne 2 (0.39 mmol) and anhydrous CH2Cl2 (2.0 mL). The reaction vial was cooled to −78 °C and LiHMDS (1 M in THF, 0.51 mmol) was added dropwise with stirring. After 1 h at −78 °C, sulfinylimine 1 (0.3 mmol), dissolved in anhydrous CH2Cl2 (1.0 mL), was added dropwise. Stirring was continued at −78 °C for 2.5 h, then the reaction was quenched with saturated NH4Cl (2.0 mL), followed by H2O (5.0 mL) and the mixture was brought to room temperature. The organic layer was taken and the aqueous layer was extracted with CH2Cl2 (3 × 15 mL). The combined organic layers were dried with anhydrous Na2SO4, filtered and the solvent was removed to give the crude product 3, which was purified by column chromatography using hexane/EtOAc (4:1, v/v) as eluent.

We gratefully acknowledge the financial support from the National Natural Science Foundation of China (No. 21761132021) and Qing Lan Project of Jiangsu Province. IKERBASQUE, Basque Foundation for Science (for V. A. Soloshonok) is also acknowledged.

© 2020 Li et al.; licensee Beilstein-Institut.
This is an Open Access article under the terms of the Creative Commons Attribution License (https://creativecommons.org/licenses/by/4.0). Please note that the reuse, redistribution and reproduction in particular requires that the authors and source are credited.
The license is subject to the Beilstein Journal of Organic Chemistry terms and conditions: (https://www.beilstein-journals.org/bjoc) 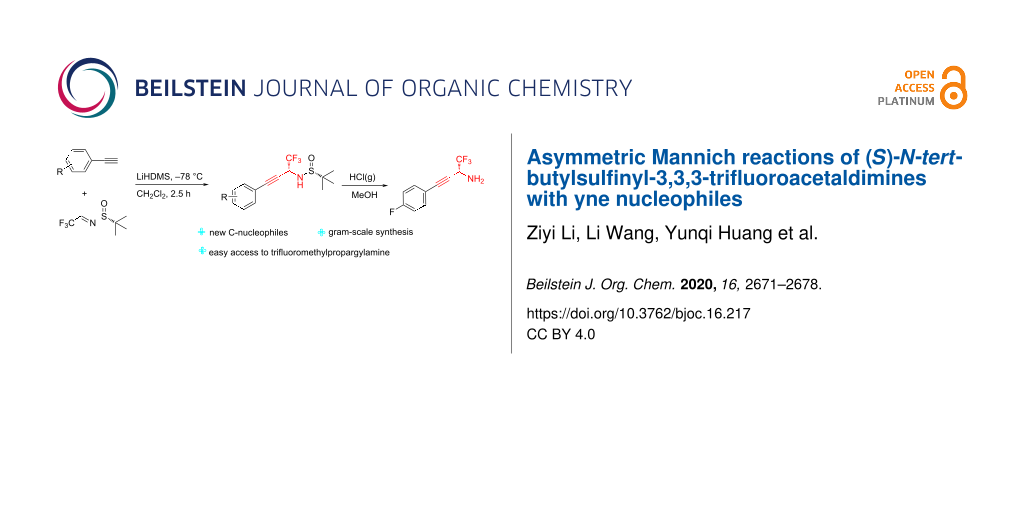