All articles from this author
Tetyana Beryozkina


All articles from this author
Wim Dehaen


All articles from this author
Vasiliy Bakulev

N-Sulfonyl amidines bearing 1,2,3-triazole, isoxazole, thiazole and pyridine substituents were successfully prepared for the first time by reactions of primary, secondary and tertiary heterocyclic thioamides with alkyl- and arylsulfonyl azides. For each type of thioamides a reliable procedure to prepare N-sulfonyl amidines in good yields was found. Reactions of 1-aryl-1,2,3-triazole-4-carbothioamides with azides were shown to be accompanied with a Dimroth rearrangement to form 1-unsubstituted 5-arylamino-1,2,3-triazole-4-N-sulfonylcarbimidamides. 2,5-Dithiocarbamoylpyridine reacts with sulfonyl azides to form a pyridine bearing two sulfonyl amidine groups.

The biological activity, rich chemistry and technically useful properties of heterocyclic compounds have made them a focal point of science and industry over the years. Heterocyclic compounds including azoles and azines have been found in natural products, and they are included in the structures of nucleic acids, vitamins, antibiotics and in many types of synthetic drugs [1-12]. N-Sulfonyl amidines have received considerable attention because they exhibit various types of pharmaceutical properties and biological activities [13-21] and also have been used as interesting building blocks in organic synthesis [17-20] (Figure 1).

An N-sulfonyl amidine was recently found to be a key group in acid–base-induced rearrangements of 1,2,3-triazoles and thiadiazoles [22]. A variety of methods have been developed for the synthesis of N-sulfonyl amidines. The most commonly used methods to prepare these compounds include the Cu-catalyzed multicomponent reaction of alkynes, sulfonyl azides and amines [23-31], the reaction of thioacetamide derivatives and cyclic thioamides with sulfonyl azides [22,32,33], the chlorophosphite-mediated Beckmann reaction of oximes with p-toluenesulfonyl azide [34], the sulfonyl ynamide rearrangement by treatment with amines [35], the sodium iodide catalyzed reaction of sulfonamide with formamide [36], and the condensation of sulfonamide derivatives with DMF–DMA [37].

With the purpose of the synthesis of heterocyclic N-sulfonyl amidines bearing various heteroatoms in the ring, namely nitrogen, sulfur and oxygen atoms, we have studied reactions of thioamides of 1,2,3-triazole-, isoxazole-, thiazolecarboxylic acids and 2,5-dithiocarbamoylpyridine with sulfonyl azides. Due to the high dipole moment, the presence of electronegative heteroatoms bearing electron lone pairs, one could propose alternative reactions which might make it difficult to find a general regioselective procedure for the synthesis of the target molecules in good yields. To the best of our knowledge, there are no examples for the synthesis of N-sulfonyl amidines of heteroaromatic acids through this reaction so far.

Since 1,2,3-triazole derivatives exhibit valuable biological and technical properties, and take part in various ring transformations and rearrangements [48-51], we decided to study reactions of 1-alkyl-1,2,3-triazole-4-carbothioamides 1a–d with aryl- and alkylsulfonyl azides 2a–f with, with the goal of affecting a “iminosulfonylation” (Scheme 1).

The thioamides 1a–d were prepared from the corresponding amides 4a–d by treatment with phosphorus decasulfide (Scheme 1). It is worth noting that amides of 1-alkyl-1,2,3-triazole-4-carboxylic acids are poorly represented in the literature and the methods of their preparation require the addition of alkyl azides to acetylene carboxylic esters and reactions of 2-diazomalonates with aliphatic amines [40,52]. The first approach leads to a mixture of two regioisomers and the second method involves the use of explosive diazo compounds. Therefore, such compounds are better prepared by a recently found method in our laboratory which includes the reaction of 4-acetyl-1,2,3-triazole 5a–d with aniline followed by a Cornforth rearrangement of the 1,2,3-triazole ring [52]. Alkyl- (2a,b) and arylsulfonyl (2c–g) azides were prepared, respectively, from the corresponding sulfonyl chlorides and sodium azides according to published methods (Figure 3) [53].

We have found that 1-butyl-1,2,3-triazole-4-carbothioamide (1c) reacts well with benzenesulfonyl azide (2c) in various solvents to form the desired 1-butyl-1,2,3-N-sulfonyl amidine 3n in diverse solvents such as n-butanol, n-propanol, toluene, ethanol, water and even under solvent-free conditions (see Table 1 for the yields and other circumstances).

From these data we can conclude that the yield of the final product is optimal for the reaction under solvent-free conditions. 1-Butyl-1,2,3-triazole 1с reacts faster than 1,2,3-triazole-4-carbothioamide 1f while using a lower amount of a sulfonyl azide (Table 1, entry 11 and Table 2, entry 14). Thus solvent-free conditions, a temperature of 88 °C and a thioamide/azide ratio of 1:2.5 are optimal to prepare N-sulfonyl amidine 1c (entry 11, Table 1).

Next, these optimized conditions were used for the synthesis of a small library of 1-alkyl-1,2,3-triazoles 3a–s (Scheme 2).

The reaction can be applied without problems to various alkyl substituents in position 1 of the 1,2,3-triazole ring from methyl to decyl and benzyl, goes well with alkylsulfonyl azides and arylsulfonyl azides that were 4-substituted with both electron-withdrawing and electron-donating substituents.

To further expand the scope of the reaction we continued studying the reaction of 1-aryl-1,2,3-triazole-4-carbothioamides 1e–h with aryl- and alkylsulfonyl azides 2a,c,f.

We have found that thioamide 1e did react with benzenesulfonyl azide (2c) neither in water, ethanol nor in the absence of a solvent, conditions that were successfully used in the synthesis of 1-alkyl-1,2,3-triazole-4-N-sulfonylimidamides 3a–s (Scheme 2). On the other hand, we have found the formation of a new product 3t in low yield together with the starting compound 1e and the product of its rearrangement to 5-(4-nitrophenyl)aminotriazole 1j [54], when the reaction was carried out in n-butanol at 105 °C (Table 2). Therefore, we can conclude that compound 3t was the product of a tandem reaction involving first the rearrangement of thioamide 1e to 1j followed by iminosulfonylation of the latter to form amidine 3t (Table 2).

To obtain higher yields of sulfonyl amidines we decided to prepare 5-arylamino-1,2,3-triazole-4-carbothioamide 1j by rearrangement of triazole 1e [54] and carried out an optimization with variations of the solvent, temperature and various additives (Table 2). We have shown that optimal conditions include the use of n-propanol, a temperature of 97 °C and a ratio of thioamide 1j and azide 2c of 1:7 which allowed to prepare the desired compound 3t in 78% (Table 2).

With the optimal conditions in hand we prepared a series of N-sulfonyl amidines 3t–aa in good yields (Scheme 3). Thus, a library of N-sulfonyl amidines bearing differently substituted 1,2,3-triazoles was successfully prepared. Among them are compounds bearing an NH-unsubstituted 1,2,3-triazole ring which gives extra possibilities for the modification of the molecules by the reaction with electrophilic reagents to prepare new compounds of this series [55] (Scheme 3).

To show the practical convenience of the developed method we tried to synthesize these compounds in a one-pot procedure starting from readily available 1-aryl-1,2,3-triazoles 1f,g,t and sulfonyl azides 2c,f (Table 3). Thioamides 1f,g,t were converted to 5-arylamino-1,2,3-triazoles 1i–k by heating at reflux in n-propanol in the presence of DBU and these rearranged thioamides were then treated with sulfonyl azide 2c,f and kept at the same temperature for 17‒31 h. After flash column chromatography, pure N-sulfonyl amidines 3t,u,x were isolated in 41‒65 % yield. The data of Table 3 demonstrates that the yields of sulfonyl amidines 3t,u,x are higher when we used the one-pot protocol in comparison with the two-step method. Furthermore, the one-pot procedure is obviously more simple and less time consuming.

In spite of the presence of a nucleophilic amino group capable to react with sulfonyl azide to form an azide group, the reaction of azides 2 occurred selectively to the thioamide group of compound 1m.

The reaction takes place also in the absence of a solvent, albeit in lower yields. We have found that secondary thioamide 1o does not react with sulfonyl azides 2a,c either in n-propanol or in the absence of a solvent. On the other hand, we have found that the reaction can occur in n-butanol at 118 °C to form compounds 3ah–ai in low yields (38‒45%) accompanied with the formation of tar-like products.

Bis(thioamide) 1p containing a pyridine ring was found to react with sulfonyl azides 2a,c–f either in boiling propanol or in the absence of a solvent to form compounds 3aj–an bearing two N-sulfonyl amidine fragments connected to a pyridine linker. The solvent-free protocol includes the use of a lower amount of azide 2d,c,f (2.5 equiv) in comparison with the reaction in n-propanol (4 equiv of azide) to afford the desired products in the same yield and therefore was selected as the method of choice for the synthesis of 3aj–an (Scheme 6). The synthesis of complexes of bis(sulfonyl amidines) 3aj–an with metals is in progress.

1H and 13C NMR spectra including 2D HMBC and HSQC experiments of compounds 3a–an, as well as high-resolution mass spectra are consistent with the proposed structures. Carbon signals of the amidine groups of compounds 3 appear at 154.1‒159.7 ppm which is close to 156 ppm which is the value found for N-sulfonyl amidines of 1,2,3-thiadiazole-4-carboxylic acid prepared by another method [22] and was clearly different from the thioamide carbon signal at 185‒187 ppm in the 13C NMR spectra of starting materials 1. A final proof of the structures of the prepared compounds comes from the X-ray data for 3e,t,ag (Schemes 2, 3, and 5). Moreover, the X-ray data reveal the existence of N-sulfonyl amidines 3e,t in the E-isomeric form and N-sulfonyl amidine 3ag in Z-isomeric form. The existence of the latter in the Z-isomeric form can be explained by steric hindrance between the phenyl and the arylsulfonyl groups.

Because of the observed evolution of nitrogen and sulfur in every reaction of heterocyclic thioamides and sulfonyl azides it is logic to propose the formation of a thiatriazole ring via [3 + 2] cycloaddition of the azide group and the C=S moiety of the thioamide group (Scheme 7).

The formation of nitrene-like products was excluded because of the high selectivity of the process, where only the thioamide group takes part, even with heterocyclic rings that contain other nucleophilic centers, and in one case, an amino group. Thiatriazoles are known to be unstable compounds that readily evolve nitrogen and sulfur upon heating [56].

© 2020 Ilkin et al.; licensee Beilstein-Institut.
This is an Open Access article under the terms of the Creative Commons Attribution License (https://creativecommons.org/licenses/by/4.0). Please note that the reuse, redistribution and reproduction in particular requires that the author(s) and source are credited and that individual graphics may be subject to special legal provisions.
The license is subject to the Beilstein Journal of Organic Chemistry terms and conditions: (https://www.beilstein-journals.org/bjoc/terms) 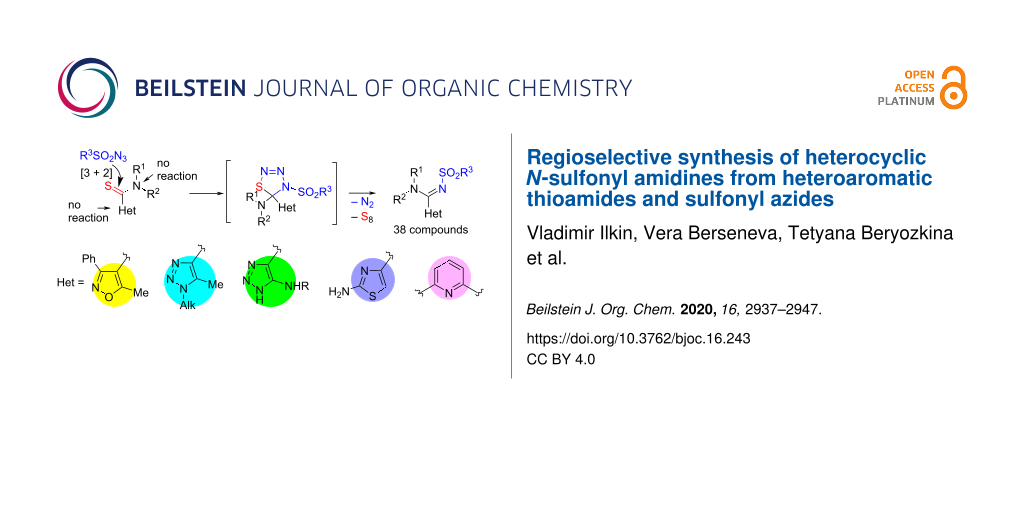