All articles from this author
Zhengyu Zhao


All articles from this author
Norimichi Saito


All articles from this author
Norio Shibata

Due to an impressively wide effect of fluorine on the biological activity, the insertion of fluorine atoms or fluorine-containing functional groups into organic molecules has become a common strategy in pharmaceutical and agrochemical industries [1-5]. Among various fluorine-containing functional groups, the trifluoromethyl (CF3) group has received countless attention in the design of novel drugs [6,7]. One utility of the CF3 group is the replacement of a methyl group in biologically active molecules to avoid the metabolic oxidation of a reactive methyl group in the parent molecules [8]. It should be noted that 19% out of 340 marketed fluoro-pharmaceuticals [4] and 42% out of 424 registered fluoro-agrochemicals [5] contain a CF3 moiety in their structures (Figure 1), but this motif has never been found in nature [9]. Several notable examples of CF3-containing pharmaceuticals and agrochemicals include cinacalcet, efavirenz, travoprost, pexidartinib, fluoxetine, and upadacitinib (Figure 2) [4,5].

Methodologies for the synthesis of trifluoromethyl compounds can be modestly divided into two general categories: the direct introduction of a CF3 group into the target position by trifluoromethylation [10,11], and the construction of a CF3 unit by transforming other functional groups [12,13]. Our group has developed various efficient methodologies for the electrophilic [14,15], nucleophilic [16], and radical [17] trifluoromethylation reactions for more than a decade. In recent years, we also reported the direct introduction of an acyl fluoride unit into aromatic compounds by the Pd-catalyzed cross-coupling reaction of aryl, vinyl, and heteroaryl iodides with 2-(difluoromethoxy)-5-nitropyridine [18]. A wide variety of acyl fluorides were efficiently obtained in high yields. We were fascinated by the synthetic versatility of acyl fluorides [19] to form other functional groups during our research on acyl fluorides. Acyl fluorides, which are one type of acyl halides, show distinct stability in the presence of moisture, indicating their suitable reactivity only in selected conditions [19].

First, [1,1'-biphenyl]-4-carbonyl fluoride (1a) was selected as the benchmark substrate to optimize the reaction conditions (see Table S1 in Supporting Information File 1 for an extensive list of reaction conditions). The investigation of a range of parameters showed that the best results were achieved by the combination of 3 equiv FLUOLEAD® and 5 equiv nHF·pyridine in solvent-free conditions at 70 °C for 24 h, providing the product 4-(trifluoromethyl)-1,1'-biphenyl (2a) in 99% 19F NMR yield (Table 1, entry 1). Control experiments conducted in the absence of either FLUOLEAD® or nHF·pyridine resulted in no desired product 2a (Table 1, entries 2 and 3). Moreover, other fluorinating agents, such as DAST, DeoxoFluor, Xtalfluor-M®, and tetrabutylammonium difluorotriphenylsilicate (TBAT), were less effective (Table 1, entry 4). When NEt3·(HF)3 was used instead of nHF·pyridine, the yield decreased to 37% (Table 1, entry 5). Using a solvent to participate in the reaction reduced the reaction yield or even resulted in no reaction (Table 1, entry 6). Testing different reaction times indicated that 24 h were necessary (Table 1, entry 7). Lowering the temperature resulted in a decrease in the solubility of substrate 1a, while raising the temperature to 100 °C allowed a similar yield to be obtained (Table 1, entry 8).

aStandard conditions: 1a (0.3 mmol), FLUOLEAD® (0.9 mmol) and nHF·pyridine (1.5 mmol) in neat conditions at 70 °C for 24 h. bDetermined by 19F NMR spectroscopy; the number in parentheses refers to the isolated yield.

With the optimized conditions in hand, the reaction scope was explored, and the results are summarized in Scheme 2. Various acyl fluorides were investigated in the presence of 3 equiv of FLUOLEAD® and 5 equiv of nHF·pyridine. We first examined the deoxyfluorination of biarylacyl fluorides 1a and 1b with a para- or ortho-substitution. Both substrates gave excellent yields of the desired product 2 (95–99%). Phenyl substrates with a functional group, such as bromo, butyl, cyclohexyl, and methyl at the para-position afforded the desired products 2c–f in good to high yields (54–89%). Naphthoyl fluorides 1g and 1h gave the desired products 2g and 2h in excellent yields (99%). Benzoyl fluoride (1i) also furnished trifluoromethylbenzene (2i) in an excellent yield (99%). Substrates with two substituents, such as 3,5-dibutyl, 1-bromo-2-methyl, and 1,2-diethoxy groups (1j–l), furnished the desired products 2j–l in good to excellent yields (66–99%). The heteroaryl group of 2-thiophene (1m), the alkyl substrates (1n and 1o) and vinylacyl fluoride (1p) were attempted and gave the desired products 2m–p in good to excellent yields (52–93%). Moreover, drug-like derivatives were next investigated as substrates to assess further the utility of this method. The acyl fluoride of the probenecid derivative 1q was successfully transformed into the corresponding trifluoromethyl compound in an excellent yield of 97% under the same conditions. The deoxyfluorination of the acyl fluoride in febuxostat (1r) required a higher reaction temperature (100 °C), and gave the corresponding CF3 product 2r in a 73% yield. The gram-scale transformation of 1a to 2a was also performed under the same conditions providing a similar result (87% isolated yield). In all cases, the yields of the CF3 products 2 were high to excellent, as determined by NMR, while the isolated yields decreased due to the high volatility of the products 2.

A mechanism of the deoxyfluorination of the acyl fluorides with FLUOLEAD®/nHF·pyridine is proposed in Scheme 3. First, FLUOLEAD® is activated with (HF)n via hydrogen bonding to provide an activated form I, which induces a nucleophilic attack from the carbonyl oxygen of 1 to I providing an intermediate III via transition state II. The intermediate III is further activated by (HF)n to form IV, which finally induces the deoxyfluorination via V furnishing the trifluoromethylated products 2 with the release of ArS(O)F and (HF)n.

We have reported an efficient protocol for the deoxyfluorination of acyl fluoride substrates, using FLUOLEAD® as the deoxofluorinating agent in the presence of Olah’s reagent, to generate trifluoromethyl compounds. FLUOLEAD® combined with Olah’s reagent, nHF·pyridine, was most effective for this functional transformation reaction. The reaction of acyl fluorides afforded the desired products smoothly in good to high yield in solvent-free conditions. An extension of this deoxyfluorination strategy to drug-like molecules was demonstrated to show the usefulness of this transformation. The present protocol also expands the utility of FLUOLEAD® in organic synthesis.

General procedure: An oven-dried narrow-mouth FEP tube (Nalgene®, 10.0 mL) containing a magnetic stirring bar was charged with substrate 1 (0.3 mmol), FLUOLEAD® (225.3 mg, 0.9 mmol, 3.0 equiv) and the nHF·pyridine complex (HF 70%, pyridine 30%, 1.5 mmol, 5.0 equiv, neat). The tube was tightly sealed and the reaction mixture stirred at 70 °C for 24 h. Then the mixture was cooled to room temperature and ethanol (3.0 mL) was added to the mixture while stirring for an additional 30 min at room temperature. The mixture was then added to 1 M aqueous NaHCO3 (3 mL) at 0 °C, extracted with Et2O (3 × 5 mL), and the combined organic layer was dried over anhydrous Na2SO4, filtered, and concentrated under reduced pressure. The yield was determined by 19F NMR analysis of the crude mixture by using C6H5OCF3 (40.0 μL, 0.3 mmol, 1.0 equiv) as an internal standard. The residue was purified by silica gel flash chromatography (n-hexane) to afford the title compounds.

© 2020 Liang et al.; licensee Beilstein-Institut.
This is an Open Access article under the terms of the Creative Commons Attribution License (https://creativecommons.org/licenses/by/4.0). Please note that the reuse, redistribution and reproduction in particular requires that the author(s) and source are credited and that individual graphics may be subject to special legal provisions.
The license is subject to the Beilstein Journal of Organic Chemistry terms and conditions: (https://www.beilstein-journals.org/bjoc/terms) 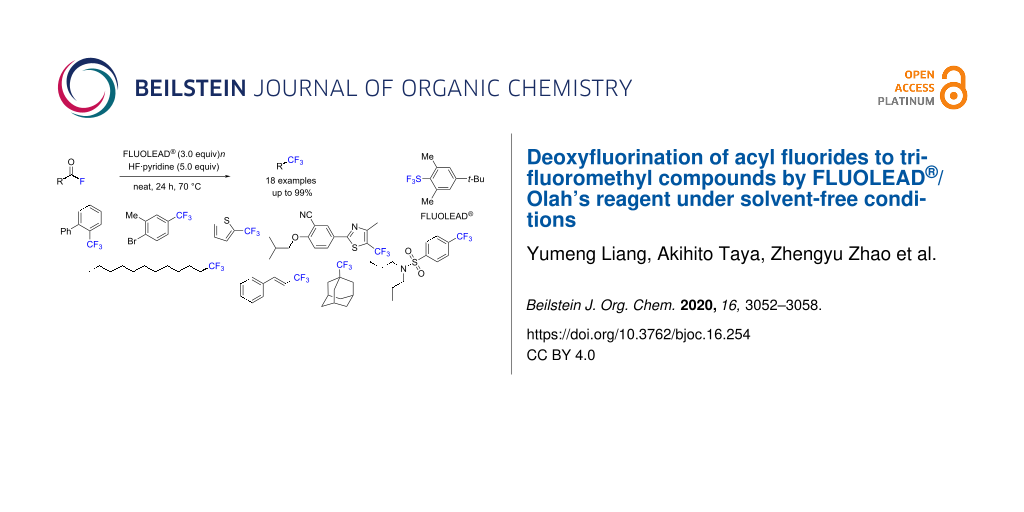