All articles from this author
Maryna V. Murlykina


All articles from this author
Oleksandr I. Zbruyev


All articles from this author
Anton V. Kozyryev


All articles from this author
Svetlana V. Shishkina


All articles from this author
Dmytro Sysoiev


All articles from this author
Vladimir I. Musatov


All articles from this author
Sergey M. Desenko

Four-component reactions of 3-amino-1,2,4-triazole or 5-amino-1H-pyrazole-4-carbonitrile with aromatic aldehydes and pyruvic acid or its esters under ultrasonication were studied. Unusual for such a reaction type, a cascade of elementary stages led to the formation of 7-azolylaminotetrahydroazolo[1,5-a]pyrimidines.

One of the promising reagents for the synthesis of diverse types of azoloazines by multicomponent and sequential reactions is pyruvic acid, along with its derivatives (Scheme 2). The selectivity of such interactions can be tuned, for example, by application of a condition-based divergence strategy [25], which is based on the variation of solvents, catalysts, and activation methods [16,26-29].

Besides the presence of an OH group in the tetrahydropyrimidine moiety (e.g., Scheme 2, VI and VIII), the formation of heterocycles that are amino-substituted in a similar position is also possible and has been described [31,32]. In particular, the reaction of methyl pyruvate and anilines led to the formation of 4-arylamino-substituted tetrahydroquinolines (Scheme 3). To the best of our knowledge, an analogous reaction has not been described for aminoazoles.

We were interested to study reactions similar to the ones shown in Scheme 3, involving aromatic aldehydes and pyruvic acid but using aminoazoles instead of anilines. Therefore, the present work is devoted to the study of multicomponent reactions involving 3-amino-1,2,4-triazole or 5-aminopyrazoles, aromatic aldehydes, and pyruvic acid or its esters under ultrasonication.

It was discovered that MCRs involving 3-amino-1,2,4-triazole or 5-amino-1H-pyrazole-4-carbonitrile with aromatic aldehydes and pyruvic acid or its esters under ultrasonication led to the formation of 4,5,6,7-tetrahydroazolo[1,5-a]pyrimidines 4a–u (Scheme 4) containing an azolylamino substituent in the 7-position via an unusual pseudo four-component reaction, rather than two heterocycles of the types V–X (Scheme 2). It should be noted that such a type of MCR, giving previously undescribed 7-azolylamino-substituted tetrahydroazolopyrimidines, is reported for the first time herein.

Thus, using 2 equivalents of 5-aminopyrazole-4-carbonitrile 1a/b in MCRs with aromatic aldehydes 2a–c and pyruvic acid (3a) in acetic acid at room temperature under ultrasonication for 90 min gave 3-cyano-7-((4-cyano-1H-pyrazol-5-yl)amino)-5-aryl-4,5,6,7-tetrahydropyrazolo[1,5-a]pyrimidine-7-carboxylic acids 4a–c. There is also the possibility of applying ethyl pyruvate (3b) instead of pyruvic acid as a reactant in the reaction with 3-substituted-5-aminopyrazole-4-carbonitriles (R = H, CH3) 1a/b and aromatic aldehydes 2a–f (ultrasonication in acetic acid at room temperature for 120 min). In this case, the corresponding ethyl 3-cyano-7-((4-cyano-3-substituted-1H-pyrazol-5-yl)amino)-2-substituted-5-aryl-4,5,6,7-tetrahydropyrazolo[1,5-a]pyrimidine-7-carboxylates (substituents = H, CH3) 4d–o were isolated in 45–80% yields (Scheme 4, Table 1).

The same products were isolated while carrying out this reaction in acetic acid at room temperature with intensive stirring instead of ultrasonic irradiation. However, the reaction time had to be increased to 24 h, and the yields and purity of the compounds 4 decreased (as seen via TLC and NMR analysis), obviously due to the worse homogenization and mass transfer compared to ultrasonication.

Literature data [17,26,27,33-35] indicates that 5-aminopyrazoles bearing an electron-withdrawing substituent in the 4-position, such as a carbonitrile group, often behave similar to 3-amino-1,2,4-triazole; therefore, we studied the latter under the same reaction conditions. We showed that the pseudo four-component heterocyclization of two equivalents of 3-amino-1,2,4-triazole (1c) with aromatic aldehydes 2a–f and pyruvic acid (3a) carried out in acetic acid at a room temperature under ultrasonication for 120 min gave 7-((1H-1,2,4-triazol-5-yl)amino)-5-aryl-4,5,6,7-tetrahydro[1,2,4]triazolo[1,5-a]pyrimidine-7-carboxylic acids 4p–u in 34–76% yields (Scheme 4). In contrast to pyrazolyl-substituted pyrazolo[1,5-a]pyrimidine-7-carboxylic acids 4d–o, triazolyl-substituted derivatives 4p–u were unstable in protic solvents in the presence of water, and especially upon increasing the temperature gradually transformed into 7-hydroxytriazolo[1,5-a]pyrimidines 5a–f, which had been obtained earlier [5] by the three-component reaction of starting materials 1c, 2a–f, and 3a (HOAc, 65 °C, 48 h). This instability complicated the isolation and characterization of the heterocycles 4p–u. The condensation of compounds 1c, 2a–f, and 3a in dry DMF under otherwise identical conditions was a way to avoid the rapid conversion of triazolyl derivatives 4p–u into 7-hydroxytriazolo[1,5-a]pyrimidines 5a–f and to isolate the heterocycles 4p–u, but in lower yields in comparison to the reaction in acetic acid.

We consequently screened various condensation conditions, specifically by applying different temperatures in the range of 0–110 °C (both with the help of conventional heating and microwave irradiation) and by using different solvents and catalysts, such as HOAc, DMSO, primary alcohols with and without the presence of HCl, Yb(OTf)3, or Et3N. In all these cases, mixtures of triazolo[1,5-a]pyrimidines 4p–u and 5a–f in different ratios (the content of compounds 5a–f increased with the elevation of temperature and time) with impurities of starting reagents and unidentified compounds were obtained.

In contrast to tetrahydropyrimidines 4p–u, containing triazolyl fragments, our attempts to obtain compounds 6 from pyrazolyl derivatives 4b/c/e/f were unsuccessful. In particular, under the same conditions (prolonged stirring in acetic acid at temperatures up to 70 °C), the starting tetrahydropyrazolopyrimidines 4b/c/e/f remained unchanged. Then, it was established that compound 4e remained stable under refluxing in acetic acid for 60 min, while heating for 120–180 min led to its decomposition. At the same time, compound 4b, after refluxing in acetic acid for ca. 120 min, was converted into 3-cyano-7-(4-methoxyphenyl)-4,7-dihydropyrazolo[1,5-a]pyrimidine-5-carboxylic acid (7, yield 35%). The same carboxylic acid 7 was obtained by counter synthesis through a three-component reaction involving 5-aminopyrazole-4-carbonitrile (1a), 4-methoxybenzaldehyde (2b), and pyruvic acid (3a) under heating at reflux in acetic acid for 240 min (yield 28%) or through two-component heterocyclization of 5-aminopyrazole 1a and p-methoxybenzylidenepyruvic acid (8, obtained from p-methoxybenzaldehyde and pyruvic acid) under the same conditions in a much shorter reaction time (10 min) with 66% yield (Scheme 5).

The results presented above indicate that the reaction possibly proceeded under kinetic and thermodynamic control, depending on the conditions. In particular, ultrasonication of the starting materials 1a, 2b, and 3a for 90 min at room temperature provided the kinetically controlled azolyltetrahydropyrimidine derivative 4b (Scheme 4), while high-temperature treatment of the same starting materials (HOAc, refluxing at 118 °C for 240 min) yielded the thermodynamically preferred dihydropyrazolopyrimidine-5-carboxylic acid 7 (Scheme 5).

The most probable pathway A (Scheme 6) to compounds 4 includes initial formation of the corresponding azomethines 9 and 10. A similar pathway was previously described and discussed in publications [31,32]. We cannot exclude other mechanisms, for example, via arylidenepyruvic acids (esters) 11 formed by water elimination from appropriate aldols (pathway B). However, our attempts to synthesize compound 4 by direct reaction of unsaturated acid 8 and aminoazole 1a under different conditions (ultrasonic activation and conventional heating) were unsuccessful, and only dihydropyrimidine 7 was obtained.

The purity and structures of the synthesized heterocycles were determined using elemental analysis, mass spectrometry, NMR spectroscopy (1D and 2D NMR experiments), and X-ray diffraction analysis. The signals in the 1H and 13C NMR spectra of some of the compounds 4 were duplicated. This could have been caused by two reasons, namely by free rotation of the azolyl fragment in the position 7 or by the presence of a second diastereomer. To establish the reason of duplication, NMR spectra were recorded at different temperatures. As the temperature was increased from 25 °C to 130 °C, the peaks were still duplicated, proving the presence of two diastereomers.

The 1H NMR spectra of 4a–c/j/k/o showed a double set of signals for the AMX system of the tetrahydropyrimidine ring, the NH protons, and the protons of the CH2CH3 moiety (in the case of esters) due to the presence of two isomers of 4.

The 1H NMR and 13C NMR spectra of triazolyl derivatives 4p–u were more complicated, both due to the duplication of the signals and the fast decomposition of the compounds 4p–u in solutions. Therefore, 2D NMR and, in some cases, 13C NMR spectra were overcrowded and uninformative. Particularly, tetrahydropyrimidines 4s–u with hydroxy substituent in the aryl ring happened to be less stable than the derivatives 4p–r with the methoxy group; this explains the absence of 13C NMR spectra for compounds 4t/u in our work.

The spectral data obtained for the tetrahydropyrimidines 4 most likely corresponded to the possible regioisomers A and B (Figure 1). Additional NOESY experiments, in particular for compound 4k, showed the presence of cross-peaks between the CH proton at position 5 with the pyrimidine NH group and cross-peaks of the NH group with protons of the aromatic system, thus excluding structure B (Figure 1).

Eventually, the structure of tetrahydropyrimidines 4 was proven by X-ray analysis carried out for a single crystal of one diastereomer of compound 4g, which allowed assignment of the structure as ethyl 5-(4-bromophenyl)-3-cyano-7-((4-cyano-1H-pyrazol-5-yl)amino)-4,5,6,7-tetrahydropyrazolo[1,5-a]pyrimidine-7-carboxylate (Figure 2).

In this study we disclosed a new direction for the multicomponent reaction of 5-aminopyrazole-4-carbonitriles or 3-amino-1,2,4-triazole with pyruvic acid or ethyl pyruvate and aromatic aldehydes under ultrasonication, leading to 7-azolylamino-4,5,6,7-tetrahydroazolo[1,5-a]pyrimidines via a cascade of elementary stages that is unusual for such transformations. Thus, we extended the molecular diversity of the compounds obtained by introducing an additional azolyl substituent to the pyrimidine ring.

The authors thank the National Academy of Sciences of Ukraine for financial support in the frame of the projects "Creation of modern bases for obtaining and analyzing substances and components of materials for pharmaceutical purposes" (0119U100727) and "Investigation of structural features of nitrogen containing heterocycles with potential biological activity" (0119U100716). M. Murlykina was supported by the Grant of National Academy of Sciences of Ukraine for young scientists’ research laboratories and groups (0118U100275).

© 2020 Sakhno et al.; licensee Beilstein-Institut.
This is an Open Access article under the terms of the Creative Commons Attribution License (https://creativecommons.org/licenses/by/4.0). Please note that the reuse, redistribution and reproduction in particular requires that the authors and source are credited.
The license is subject to the Beilstein Journal of Organic Chemistry terms and conditions: (https://www.beilstein-journals.org/bjoc) 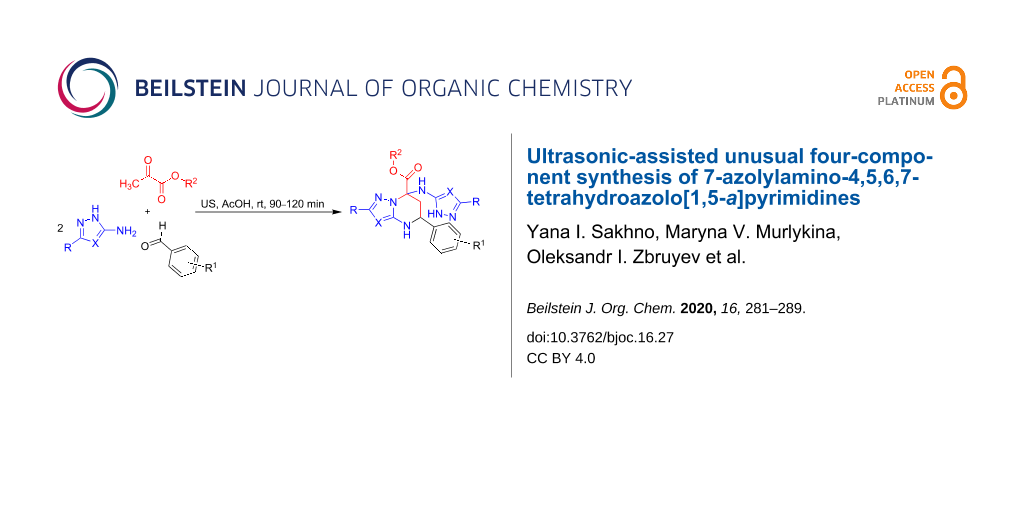