All articles from this author
Shiling Zhang


All articles from this author
Bin Li

An efficient and simple KOt-Bu-promoted selective ring-opening N-alkylation of 2-methyl-2-oxazoline or 2-(methylthio)-4,5-dihydrothiazole with benzyl halides under basic conditions is described for the first time. The method provides a convenient and practical pathway for the synthesis of versatile 2-aminoethyl acetates and N-substituted thiazolidinones with good functional group tolerance and selectivity. KOt-Bu not only plays an important role to promote this ring-opening N-alkylation, but also acts as an oxygen donor.

2-Oxazolines are important structural units in pharmaceutical applications and efficient ligands in coordination chemistry, and also valuable protecting or directing groups in catalysis [1-3]. 2-Oxazolines are a readily stable class of heterocycles resistant to a range of nucleophiles, bases, or radicals [4,5], which can be easily generated from amino alcohols and carboxylic acids, and from alkenes or epoxides as substrates via alternative synthetic procedures [6]. However, under acidic conditions, oxazolines transform into β-substituted carboxamides through nucleophilic ring opening with SN2 attack at the C5 position of the ring [7,8]. Recently, Guo’s group developed an efficient method for the synthesis of β-nitrate ester carboxamides using tert-butyl nitrite as the nitro source and oxygen as the oxidant through the ring opening of 2-oxazolines [9] (Scheme 1a). Kappe reported a two-step continuous-flow synthesis of N-(2-aminoethyl)acylamides through ring opening/hydrogenation of oxazolines with TMSN3 as the azide source [10] (Scheme 1a). Coates described a Co2(CO)8-catalyzed ring-opening hydroformylation of oxazolines for the synthesis of β-amidoaldehydes [11] (Scheme 1a). However, the ring-opening N-alkylation of 2-oxazolines to produce 2-aminoethyl acetate derivatives under basic conditions has not been reported.

Recently, potassium tert-butoxide has been shown to be an efficient promoter for C–C-bond formation reactions [18-22]. However, only few reports described C–N-bond cross-coupling reactions using potassium tert-butoxide as promoter. Wu developed an efficient protocol for the KOt-Bu-promoted synthesis of 1-aminoisoquinolines from 2-methylbenzonitriles and benzonitriles [23], and the carbonylative cyclization of propargylic amines with selenium under CO gas-free conditions [24]. Based on our continuing interest in developing new transformation methodologies of oxazolines [25], herein, we report a simple KOt-Bu-promoted selective ring-opening N-alkylation of 2-methyl-2-oxazolines and 2-(methylthio)-4,5-dihydrothiazole with benzyl halides, leading to 2-aminoethyl acetates and N-substituted thiazolidinone derivatives under mild conditions (Scheme 1c).

To test this ring-opening N-alkylation of 2-oxazoline, benzyl bromide (1a) and 2-methyl-2-oxazoline (2) were chosen as the model substrates for the reaction in the presence of 20 mol % of CuBr2, 2 equiv of KOt-Bu in CH3CN at 100 °C for 16 h, and a full conversion to the 2-aminoethyl acetate product 3a was obtained (Table 1, entry 1). By changing the copper salt to CuBr or CuI, similar results were detected under the same conditions (Table 1, entries 2 and 3). Surprisingly, when this reaction was performed without copper salts and decreasing the temperature to 50 °C in CH3CN, still a 99% GC yield of the desired product 3a was obtained (Table 1, entries 4 and 5). These results revealed that the copper salt is not necessary for this ring-opening N-alkylation reaction to take place. Next we evaluated several solvents, including toluene, EtOH, THF, H2O, CH2Cl2 and dimethyl carbonate (DMC). Among them, DMC afforded the product 3a in an excellent yield and as greener solvent compared to CH3CN, it was selected as the best solvent for this ring-opening N-alkylation (Table 1, entry 11). When replacing KOt-Bu by other potassium salts such as KOH, KOAc and PhCOOK the product yield significantly dropped (Table 1, entries 13–15). Also, decreasing the temperature to room temperature or the amount of KOt-Bu to 0.5 equiv led to lower yields (Table 1, entries 16 and 17). No product was obtained when the reaction was repeated in the absence of a KOt-Bu as base (Table 1, entry 18), demonstrating that KOt-Bu plays an important role for promoting this ring-opening N-alkylation. Finally, performing the reaction with 1.0 equiv of KOt-Bu in DMC at 50 °C for 16 h, was found to be the optimized conditions.

Next, the scope and limitations of this KOt-Bu-promoted ring-opening N-alkylation from alkyl bromides with 2-methyl-2-oxazolines were explored using the optimized conditions. As shown in Scheme 2, various benzyl bromides bearing -Me, -t-Bu, -F, and -Cl groups were applied in the synthesis and afforded the tertiary amines 3a–g in 70–85% yield, respectively. Notably, the steric and inductive effects of the substituents did not hamper this ring-opening N-alkylation. Allyl bromide (1h) successfully reacted with 2-methyl-2-oxazoline and produced the corresponding product 3h in good yield (69%). More importantly, bromide-containing enoate derivatives 1i and 1j were easily transferred to the corresponding ring-opened N-alkylated triesters 3i and 3j containing two C=C bonds which could be important as precursors for double Michael additions, and were isolated in 71% and 58% yields.

The above described synthetic system has been evaluated for the ring-opening N-alkylation with benzyl chloride derivatives 4 under similar conditions but at 80 °C, as the chlorides are expected to be less reactive than the corresponding benzyl bromides (Scheme 3). Only 26% yield of 2-aminoethyl acetate compound 3a were observed, however, the addition of 1.0 equiv of I2 allowed to increase the conversion up to 95% and product 3a was isolated in 78% yield. Other benzyl chlorides bearing -Me, -t-Bu, and -F groups in the para-position were applied to generate corresponding products 3b, 3d, and 3e in moderate to good yields. Furthermore, the reaction proceeded well with heterocycle-containing chlorides such as 2-chloro-5-(chloromethyl)thiophene (4e), leading to 2-aminoethyl acetate product 3k in 66% yield which has potential as bifunctional monomer for polymerization.

Furthermore, oxazole derivative 2,4,4-trimethyl-4,5-dihydrooxazole (2b) was also examined in the KOt-Bu-promoted ring-opening N-alkylation with 4-methylbenzyl bromide, which successfully led to the corresponding product 3l in 72% isolated yield as shown in Scheme 4.

Next, the reaction of benzyl bromide (1a) with 2-(methylthio)-4,5-dihydrothiazole was performed under similar conditions but with 2 equiv of KOt-Bu and 2 equiv of I2 at 80 °C (Scheme 5). However, in this case the N-substituted thiazolidone compound 5a was observed as the only product instead of the above 2-aminoethyl acetate compound. Analogously, the N-substituted thiazolidone derivatives 5a–h were obtained in 63–90% yields from the corresponding benzyl bromides. The electron-donating and the electron-withdrawing groups did not affect these N-alkylation reactions. Interestingly, the reaction tolerates a cyano functional group on the aryl ring of benzyl chloride, and the corresponding thiazolidone 5i (80%), was directly obtained without reaction of C≡N bond. Substrates with pyridyl and thiophene groups were also applied to the synthesis of the corresponding thiazolidine derivatives 5j and 5k in 77% and 50% yields, respectively.

On the other hand, further transformation of the 2-aminoethyl acetate product 3a was investigated, and 88% yield of 2-(dibenzylamino)ethanol (6) was successfully produced in the presence of 2.0 equiv of K2CO3 in MeOH at room temperature for 24 h (Scheme 6). This result indicated that these types of 2-aminoethyl acetate products are useful building blocks for functionalized alcohols.

Next, to gather more information about this reaction, some control experiments were performed under the established ring-opening N-alkylation conditions. First, no conversion to the desired product 3a was observed without the addition of KOt-Bu. However, the addition of 0.2 equiv of KOt-Bu gave the 2-aminoethyl acetate product 3a in 39% yield under air and 36% yield under a N2 atmosphere, whereas 86% yield of 3a were obtained in the presence of 1.0 equiv of KOt-Bu under N2 conditions (Scheme 7a). These results indicate that KOt-Bu plays an important role to improve the yield of 2-aminoethyl acetate product from this ring-opening N-alkylation. Then, when this reaction is performed in a mixed solvent system (DMC/H2O 8:2), only 40% yield of the desired product 3a was produced, while no labeled compound was detected by GC–MS in the 18O-labeled experiment (Scheme 7b and c). These important results revealed that the oxygen of product 3a does not come from water or air, and it may be transferred from KOt-Bu as supported by Dash and co-worker who demonstrated KOt-Bu can serve as an oxygen source [26]. Therefore, in the present KOt-Bu-promoted ring-opening N-alkylation, KOt-Bu not only plays an important role to promote this type of reaction, but also acts as a nucleophilic oxygen donor during the C=N bond cleavage process to lead the corresponding 2-aminoethyl acetates.

On the basis of the results collected from the control experiments and previous works in the literature, a plausible mechanism for this KOt-Bu-promoted ring-opening N-alkylation is illustrated in Scheme 9. The reaction is proposed to begin with the generation of iminium ether A [27,28], generated from the reaction of 2-metyl-2-oxazoline with benzyl bromide in the presence of KOt-Bu with release KBr. A subsequent second nucleophilic substitution of nitrogen to benzyl bromide would form an ammonium intermediate C. The final product 3a would be produced after rearrangement and release of tert-butyl bromide. On the other hand, added I2 would react with intermediate B’ and lead to the thiazolidone compound 5a.

In summary, we have developed a new and simple transition-metal-free selective ring-opening N-alkylation of 2-methyl-2-oxazoline or 2-(methylthio)-4,5-dihydrothiazole with benzyl halides and allyl halides under mild conditions. Various 2-aminoethyl acetates and N-substituted thiazolidinone derivatives were successfully isolated in moderate to excellent yields. Moreover, in this reaction system, KOt-Bu not only plays an important role to promote this ring-opening N-alkylation, but also acts as an oxygen donor.

KOt-Bu (0.5 mmol, 56 mg), 2-oxazoline (0.5 mmol), benzyl bromide (1.0 mmol) and DMC (2 mL) were introduced in a tube, equipped with magnetic stirring bar and the mixture was stirred at 50 °C. After 16 h, the progress of the reaction was analyzed by gas chromatography. The solvent was then evaporated under vacuum and the desired product was purified by silica gel chromatography and a mixture of petroleum ether/ethyl acetate as eluent.

KOt-Bu (0.5 mmol, 56 mg), I2 (0.5 mmol, 127 mg), 2-oxazoline (0.5 mmol), benzyl chloride (1.0 mmol) and DMC (2 mL) were introduced in a tube, equipped with magnetic stirring bar and the mixture was stirred at 80 °C. After 16 h, the progress of the reaction was analyzed by gas chromatography. The solvent was then evaporated under vacuum and the desired product was purified by silica gel chromatography and a mixture of petroleum ether/ethyl acetate as eluent.

KOt-Bu (1 mmol, 112 mg), I2 (1 mmol, 254 mg), 2-(methylthio)-4,5-dihydrothiazole (0.5 mmol), benzyl halide (1.0 mmol) and DMC (2 mL) were introduced in a tube, equipped with magnetic stirring bar and the mixture was stirred at 80 °C. After 16 h, the progress of the reaction was analyzed by gas chromatography. The solvent was then evaporated under vacuum and the desired product was purified by silica gel chromatography and a mixture of petroleum ether/ethyl acetate as eluent.

© 2020 Lin et al.; licensee Beilstein-Institut.
This is an Open Access article under the terms of the Creative Commons Attribution License (http://creativecommons.org/licenses/by/4.0). Please note that the reuse, redistribution and reproduction in particular requires that the authors and source are credited.
The license is subject to the Beilstein Journal of Organic Chemistry terms and conditions: (https://www.beilstein-journals.org/bjoc) 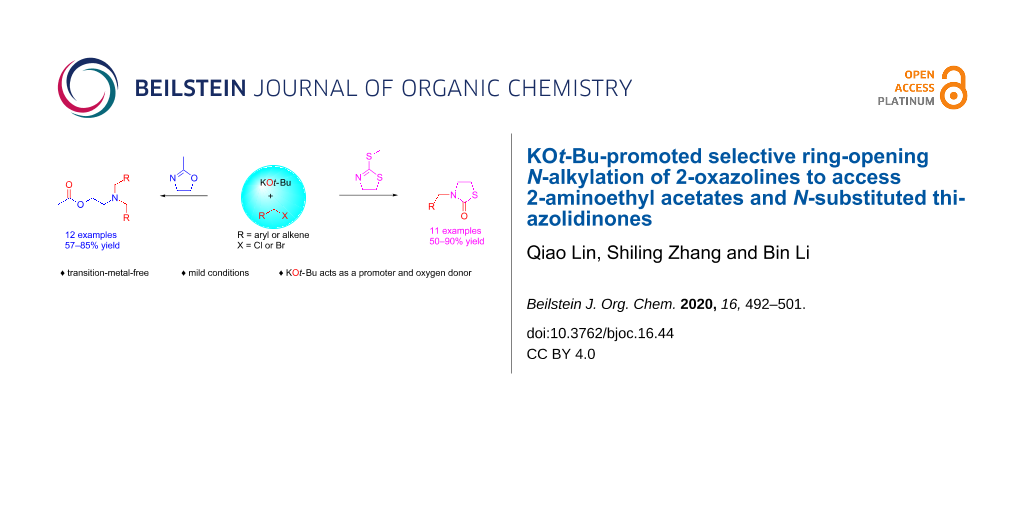