All articles from this author
Nataliya A. Makhaeva


All articles from this author
Vladimir A. Potapov

The regio- and stereoselective synthesis of organoselenium compounds based on selenium-centered electrophilic reagents has been one of the most important and effective directions in organoselenium chemistry for half a century [1-12].

A series of novel approaches to functionalized organoselenium compounds was developed recently [23-29]. Among these is an elegant, highly effective approach that led to β-hydroxy, β-mercapto, and β-amino-substituted diorganyl diselenides and selenides. This was accomplished by the opening of three-membered oxygen-, sulfur- and nitrogen-containing heterocycles under the action of bis(trimethylsilyl)selenide [23]. The methodology based on bis(trimethylsilyl)selenide was also successfully applied to the synthesis of functionalized asymmetric alkyl- and vinyl selenides, including cyclic disubstituted 1,3-thiaselenolane and trisubstituted thiaselenane [26,27]. Vinyl selenides represent a very interesting class of compounds with a wide range of synthetic applications [28,29].

The anchimeric assistance effect, also known as the participation of neighbouring groups, is usually considered mainly as a factor accelerating the rate of nucleophilic substitution reactions. At present, we are observing a new manifestation of this effect, consisting in the promotion of new rearrangements leading to the selective formation of various selenium-containing unsaturated linear and heterocyclic compounds. This effect works in 2-(bromomethyl)-1,3-thiaselenole (1) – a unique reagent, which exhibits unusual properties in nucleophilic reactions. This reagent was obtained [30-32] in high yield and with high purity by a one-pot synthesis from divinyl sulfide [33-35] and selenium dibromide.

The structure of compound 1 suggests the possibility of formation of both seleniranium 2 and thiiranium 3 cations, whose participation in the nucleophilic substitution reaction will lead to two different reaction products (Scheme 1).

However, particularly, the reaction proceeds via an intermediate seleniranium cation 2. This is explained by the high anchimeric assistance effect of the selenium atom which is more than one order of magnitude greater than the effect of the sulfur atom. This was established based on the determination of the absolute and relative rates of nucleophilic substitution of chlorine in 2,6-dichloro-9-selenabicyclo[3.3.1]nonane and 2,6-dichloro-9-thiabicyclo[3.3.1]nonane [36].

The high anchimeric assistance effect of the selenium atom in thiaselenole 1 is the driving force for the generation of the seleniranium intermediate 2. A fundamental approach to the regio- and stereoselective synthesis of unsaturated functionalized organoselenium compounds was developed during the last ten years based on new directions for nucleophilic substitution reactions proceeding via intermediate seleniranium cations 2 generated from thiaselenole 1.

We have carried out new regioselective reactions of thiaselenole 1 with dithiocarbamates [31], ketones [37], thiols [38,39], dithiols [38], and mercapto benzazoles [40]. These are the first examples of a nucleophilic attack at the selenium atom of the seleniranium cation 2 with the generation of a new Se–S bond, yielding new families of linear unsaturated (Z)-2-[(organylsulfanyl)selanyl]ethenyl vinyl sulfides (Scheme 3).

Cascade regio- and stereoselective reactions of thiaselenole 1 with water and ethylene glycol resulted in the formation of the first representatives of the new family of polyfunctional 2,3-dihydro-1,4-thiaselenines [41]. The regioselective nucleophilic substitution reactions in thiaselenole 1 proceeding at the C2 carbon atom of the seleniranium cation 2 with dithiocarbomates [31], thiourea [32], alcohols [42], functionalized organic acids [43,44], functionalized pyridines [45], ammonium thiocyanate [46], and mercapto benzazoles [40] were developed (Scheme 4).

The new methodology of a regioselective nucleophilic substitution at three different centers of a seleniranium intermediate 2 in reactions of thiaselenole 1 with mercapto benzazoles containing various combinations of heteroatoms (N, O and S) was developed (Scheme 5). The reaction proceeded with the formation of a new family of 2,3-dihydro-1,4-thiaselenines (up to 96% yields) – products of rearrangement with ring expansion, which in turn underwent rearrangement with ring contraction, forming a new family of 1,3-thiaselenoles in up to 99% yield. The article was included in the RSC themed web collection "The chemistry of Selenium & Tellurium at the beginning of the 3rd millennium" [40].

It was suggested that the reaction proceeds via an intermediate six-membered selenocyanate 5, which could be observed at a lower temperature. Indeed, monitoring the reaction by 1H NMR spectroscopy using the same conditions as in the synthesis of the selenocyanate 4, but at 0 °C confirmed this assumption (Scheme 6).

The formation of the six-membered heterocycle of 2,3-dihydro-1,4-thiaselenin-2-yl selenocyanate 5 was confirmed, inter alia, by the observation of two doublets corresponding to the olefinic protons of the SCH=CHSe group with 3J = 9.9 Hz in the 1H NMR spectrum (Table 1, entry 2). In the case of five-membered compounds 1 and 4, the coupling constant of the olefinic protons of the SCH=CHSe group would be 3JH,H = 6.3 Hz [32,40]. The SCHSe group of the heterocycle 5 was characterized by a doublet of doublets at 5.21 ppm (3J = 2.1 and 3J = 6.6 Hz). This was the result of coupling with the nonequivalent protons of the CH2Se group. Similar spectral characteristics were observed for other six-membered 2,3-dihydro-1,4-thiaselenin-2-yl derivatives [31,32,38,40].

The formation of thiaselenole 4 was the result of two rearrangements, rather than a “classical” nucleophilic substitution of the bromine atom in thiaselenole 1.

Similar rearrangements were found and studied in the reactions of thiaselenole 1 with mercaptobenzazoles [40].

The one-pot synthesis of hitherto unknown bis(1,3-thiaselenol-2-ylmethyl) diselenide (8) in 90% yield from thiaselenole 1 was developed (Scheme 10). The reaction proceeded via the formation of thiaselenole selenocyanate 4, which was in situ converted into diselenide 8. This compound consisted of two diastereomers, and two signals corresponding to each of them were observed in the 77Se NMR spectrum.

The structures of compounds 6a–l, 7a,b and 8 were proved by 1H, 13C, 15N, 19F and 77Se NMR and mass spectrometry. The composition of the products was confirmed by elemental analysis. Molecular ions of the synthesized compounds were observed in their mass spectra.

Two doublets of the olefinic protons of the SCH=CHSe group with 3J = 6.3–6.6 Hz were observed in the 1H NMR spectra of heterocycles 4, 6a–l, 7a,b and 8. These values are typical for five-membered 1,3-thiaselenoles [31,32]. The structure of 1,3-thiaselenol-2-ylmethyl derivatives 4, 6a–l, 7a,b and 8 was confirmed, inter alia, by the spin–spin coupling constants between the selenium atom and the carbon atom of the SCHSe group in the ring. The observed values (66.1–68.2 Hz) were characteristic for direct coupling constants (1JSe-C).

Adrián A. Heredia and Alicia B. Peñéñory

© 2020 Amosova et al.; licensee Beilstein-Institut.
This is an Open Access article under the terms of the Creative Commons Attribution License (http://creativecommons.org/licenses/by/4.0). Please note that the reuse, redistribution and reproduction in particular requires that the authors and source are credited.
The license is subject to the Beilstein Journal of Organic Chemistry terms and conditions: (https://www.beilstein-journals.org/bjoc) 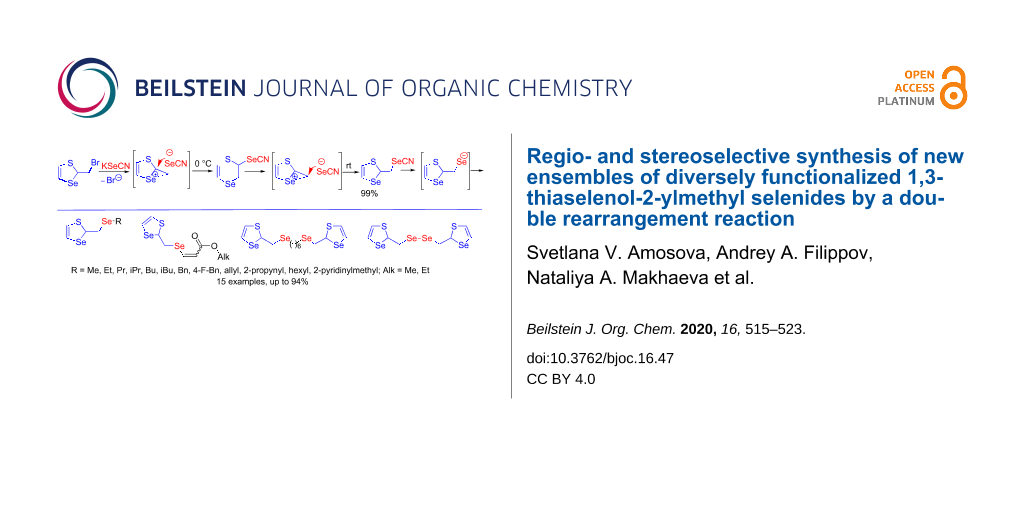