All articles from this author
Hikari Yamauchi


All articles from this author
Shunsuke Sakuma


All articles from this author
Yukako Hayashi


All articles from this author
Tadashi Hyodo


All articles from this author
Tohru Obata


All articles from this author
Yasuyuki Fujiwara

The synthesis of organoselenium compounds and their biological activity have attracted considerable attention in research fields directed to drug discovery [1-13]. Among these compounds, heteroaryl selenides and heteroaryl diselenides have been synthesized by a variety of methods [14,15], and many of the targets exhibited biological activity (Figure 1). For example, bis(2-pyridyl) diselenide I has the potential to mitigate oxidative stress and inhibits the AChE activity [16], bis(quinolin-8-yl) diselenide (II) exhibited antioxidant activity in a skin cell model of UVA-induced stress [17], and bis(2-alkylindol-3-yl) selenides III exhibit antitumor activity toward HT-1080 and MG-22A tumor cell lines [18]. The imidazo[1,2-a]pyridine ring is also an important aromatic heterocycle because its derivatives are biologically active and play an important role in medicinal chemistry [19,20]. A number of clinically used drugs and clinical candidates, such as zolpidem, alpidem, saripidem, zolimidine, necopidem, and GSK812397 contain the imidazo[1,2-a]pyridine scaffold [21-26]. 3-(Arylselanyl)imidazo[1,2-a]pyridines IV were reported to act as potential antioxidants and showed antiproliferative activity [27,28]. Consequently, they have attracted much attention, and methods for their syntheses have been actively pursued.

The structures of the diselenide 2a and the selenide 3a were determined by single crystal X-ray diffractometry and are shown in Figure 2. The compounds 2a and 3a both had selenium atoms attached to the 3-positions of their respective imidazo[1,2-a]pyridine rings. The diselenide 2a had a characteristic structure with an exceedingly narrow C–Se–Se–C torsion angle (C1A–Se1A–Se1B–C1B: 49.6(5)°). The imidazo[1,2-a]pyridine planes and the phenyl rings were slightly twisted (C1A–C2A–C3A–C4A: −14.9(19)° and C1B–C2B–C3B–C4B: −21.7(19)°, Figure 2a and Figure 2b). Moreover, the imidazo[1,2-a]pyridine planes and phenyl rings that face each other were almost parallel (mean-interplanar angles: Ph(A)–ImdazoPy(B): 4.59° and Ph(B)–ImdazoPy(A): 4.64°, Figure S2, Supporting Information File 1), and 2a exhibited intramolecular π–π interactions over the whole molecule.

To demonstrate the scope and limitations of the developed C–H selenation process, the reactions of various imidazopyridines 1 with 1 and 0.5 equiv of Se powder, respectively, were investigated under aerobic conditions in DMSO using the CuI (10 mol %) and 1,10-phenanthroline (10 mol %) catalytic system at 130 °C, the results of which are summarized in Figure 3 and Figure 4. Initially, we examined the syntheses of the diselenides 2 using 1 equiv of Se powder (2.0 mmol) relative to the 2-arylimidazopyridines 1b–i (2.0 mmol). The 2-phenylimidazopyridines 1b–d afforded the corresponding diselenides 2b–d bearing methoxy, methyl, and fluoro substituents at the 6-position of the respective imidazopyridine rings in good to high yield (77–88%, Figure 3). Furthermore, the 2-arylimidazopyridines 1f–h also afforded the corresponding products 2f–h in a yield of 82–89%. The compounds 1e and 1i, bearing a trifluoromethyl group, gave complex mixtures, and the expected products 2e and 2i were not obtained, which suggests that this reaction was sensitive to the electronic nature of the substituent of the imidazopyridine derivative. In addition, the selenide 3 was formed as a minor byproduct, and 2 and 3 were easily separated by silica gel column chromatography (yield of 3b–d, 3f, and 3g, respectively: 6–10%).

We next synthesized the selenides 3 using 0.5 equiv of Se powder (Figure 4). The reactions of Se powder with the imidazopyridines 1b–d, f, and h, bearing methoxy, methyl, and fluoro substituents as R1 or R2, gave the corresponding selenides 3b–d, f, and h in good to excellent yield (78–90%). In contrast, the imidazopyridines bearing a trifluoromethyl group gave complex mixtures from which the expected products 3e and 3i were not obtained. The substituents R1 and R2 appeared to influence these reactions in the same manner as they did during the syntheses of the diselenides 2. It is noteworthy that this reaction only gave the selenide 3, with no diselenide byproduct observed.

We considered that the reaction mechanism may be similar to the Csp²–H selenation of imidazo[1,5-a]pyridines with Se powder proposed by Murai [34]. Based on this report and the above-mentioned control experiments, a plausible double selenation mechanism is shown in Scheme 2 and Scheme 3. The first step of the reaction involves the generation of the intermediate B via A by the Cu-mediated electrophilic substitution of 1 with selenium. The oxidative homocoupling of the intermediate B then proceeds to give the diselenide 2. On the other hand, in the presence of excess imidazopyridine, the oxidative addition of imidazopyridine 1 to B, followed by the aromatization of C leads to the intermediate D. The intermediate D undergoes a reductive elimination to give the selenide 3, with the generation of Cu(I). The interconversion of the diselenide 2 and the selenide 3 is also possibility in this reaction, with the expected mechanism shown in Scheme 3. The oxidative addition of the copper catalyst to the diselenide 2 generates the intermediate E, which is then attacked by an imidazopyridine 1 at the 3-position to form the intermediate C and the selenide anion F. The intermediate C undergoes a reductive elimination and aromatization to give the selenide 3 and Cu(I). Moreover, the Cu-mediated electrophilic addition of 3 and selenium affords G, which aromatizes to form E and then probably undergoes a reductive elimination to afford the diselenide 2.

The anticancer activity of the novel synthesized bis(2-arylimidazo[1,2-a]pyridin-3-yl) diselenides 2 and selenides 3 was evaluated in human cervical cancer HeLa cells (Figure 5). At 25 µM, each compound significantly decreased the cell viability compared to the control group. When compared, each diselenide 2 was more toxic to HeLa cells than the corresponding selenide 3. Moreover, the 4-methoxyphenyl-containing diselenide 2f and the corresponding selenide 3f exhibited the highest anticancer activity among the diselenides and selenides, respectively. Thus, the 4-methoxyphenyl group appeared to enhance the anticancer activity of the bis(2-arylimidazo[1,2-a]pyridin-3-yl) diselenides and selenides. Furthermore, only the compound 2f showed a higher anticancer activity than doxorubicin (DOX), a well-known anthracycline-based anticancer drug. As shown in Figure 6, 2f also exhibited cytotoxicity against U251 human glioblastoma cells and HKBMM human malignant meningioma cells. Importantly, the diselenide 2f was more cytotoxic toward HeLa cancer cells than to human brain microvascular endothelial (HBME) cells, which are noncancerous (Figure 7). Hence, the diselenide 2f may possibly be highly cytotoxic toward various cancer cell lines and relatively low cytotoxic against noncancer cells.

The Cu-catalyzed double C–H selenations of imidazo[1,2-a]pyridines with Se powder afforded novel bis(2-arylimidazopyridin-3-yl) diselenides in satisfactory yields under mild reaction conditions. This reaction also produced the corresponding selenides by simply controlling the amount of Se powder used in the reaction. Among the novel compounds synthesized, the bis[2-(4-methoxyphenyl)imidazo[1,2-a]pyridin-3-yl] diselenide 2f exhibited an excellent anticancer activity toward various cancer cell lines and relatively low cytotoxicity toward noncancer cells, suggesting that the diselenide 2f may potentially be an anticancer therapeutic drug. The application of this reaction to other heterocycles, as well as detailed studies into the C–H selenation and anticancer mechanisms are currently underway in our group.

Svetlana V. Amosova, Andrey A. Filippov, Nataliya A. Makhaeva, Alexander I. Albanov and Vladimir A. Potapov

© 2020 Matsumura et al.; licensee Beilstein-Institut.
This is an Open Access article under the terms of the Creative Commons Attribution License (http://creativecommons.org/licenses/by/4.0). Please note that the reuse, redistribution and reproduction in particular requires that the authors and source are credited.
The license is subject to the Beilstein Journal of Organic Chemistry terms and conditions: (https://www.beilstein-journals.org/bjoc) 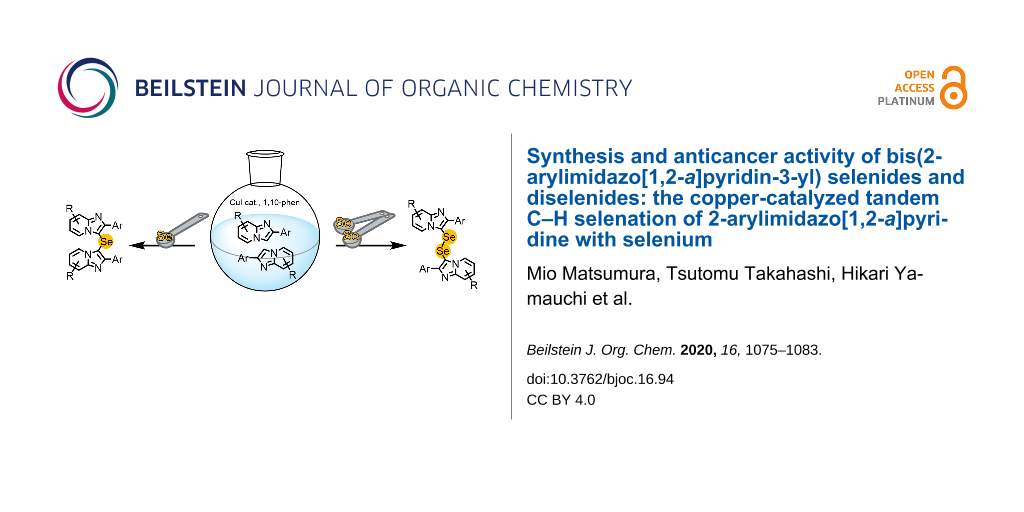