All articles from this author
Shuai Liu


All articles from this author
Yangen Huang


All articles from this author
Xiu-Hua Xu

The trifluoromethylthio (SCF3) group could significantly improve the lipophilicity of organic molecules as shown by its high Hansch constant (π = 1.44 for SCF3, 0.88 for CF3, and 0.61 for SMe) [1] that helps permeation across biological membranes. Furthermore, the strong electron-withdrawing properties of the SCF3 group (Hammett constants: σp = 0.50, σm = 0.40) [2] with respect to metabolic stability have attracted considerable interest in pharmaceutical and agrochemical industries [3-5]. Traditional methods to access these compounds mainly include halogen–fluorine exchange of halomethyl sulfides and trifluoromethylation of sulfur-containing compounds [6-8]. Over the last decade, tremendous efforts have been triggered to develop methods for the direct incorporation of the SCF3 group into organic compounds [9-16], such as alkynes, alkenes, arenes, and alkanes. Despite these impressive advances, there is a continued strong demand for new methods that enable the efficient synthesis of SCF3-containing compounds, especially those featuring medicinally promising scaffolds.

With the optimized reaction conditions in hand, we then set out to explore the substrate scope of N-[(3-aryl)propioloyl]indoles (Scheme 2). First, we explored the effect of the substitution on the indole ring. Both electron-donating and withdrawing groups at different positions of the indole ring produced the bis(trifluoromethylthiolated) products 2a–o in moderate to good yields. A wide range of functionalities such as alkyl, alkoxy, nitro, nitrile, ester, aldehyde, fluoro, chloro, and bromo were well-tolerated and compatible under the mild reaction conditions. Substrate 1p containing a methyl substituent on the phenyl ring could also participate in the reaction and furnish the desired product in moderate yield. However, attempts to prepare the substrates bearing an alkyl or electron-deficient aryl substituent on the alkynone were not successful. The structure of product 2a was unambiguously identified by single-crystal X-ray analysis.

When the N-[(3-aryl)propioloyl]indole substrates (3a–d) with different substituents at the 3-position of the indole ring were subjected to the standard conditions, the cascade trifluoromethylthiolation and cyclization occurred to yield trifluoromethylthiolated pyrrolo[1,2-a]indol-3-ones (4a–d) in moderate yields (Scheme 3). The functionalities including alkyl, aryl, nitrile, and acyl were also well tolerated in this reaction.

In order to gain insight into the reaction mechanism, the radical scavenger 2,2,6,6-tetramethylpiperidin-1-oxyl (TEMPO) was added to the standard reactions of 1a and 3b, respectively. The desired product 2a was not formed and only trace of 4b was detected (see the Supporting Information File 1), which suggested that the radical process was probably involved in these transformations. Notably, no TEMPO-trapped product was detected by 19F NMR spectra of the crude reaction mixtures. On the basis of these results and literature studies [21,23,42-47], a plausible reaction mechanism was proposed in Scheme 4. First, oxidation of AgSCF3 by (NH4)2S2O8 generates AgIISCF3, which could be further transformed to the CF3S radical or CF3SSCF3 [23,36]. Then, the addition of a CF3S radical to the alkyne function of substrates 1 or 3 afforded intermediate A. Subsequently, cyclization of intermediate A, followed by oxidation with (NH4)2S2O8, gave intermediate C [21,42-47]. Finally, deprotonation of intermediate C (R2 ≠ H) with NaHCO3 delivered the aromatized product 4. In the case of intermediate C (R2 = H), intermediate D was probably formed, and further underwent electrophilic trifluoromethylthiolation with CF3SSCF3 [48,49] to furnish the bis(trifluoromethylthiolated) product 2.

National Natural Science Foundation of China (21991121, 21421002), the Strategic Priority Research Program of the Chinese Academy of Sciences (XDB20000000), and Youth Innovation Promotion Association CAS (No. 2016234) are greatly acknowledged for funding this work.

© 2020 Bi et al.; licensee Beilstein-Institut.
This is an Open Access article under the terms of the Creative Commons Attribution License (http://creativecommons.org/licenses/by/4.0). Please note that the reuse, redistribution and reproduction in particular requires that the authors and source are credited.
The license is subject to the Beilstein Journal of Organic Chemistry terms and conditions: (https://www.beilstein-journals.org/bjoc) 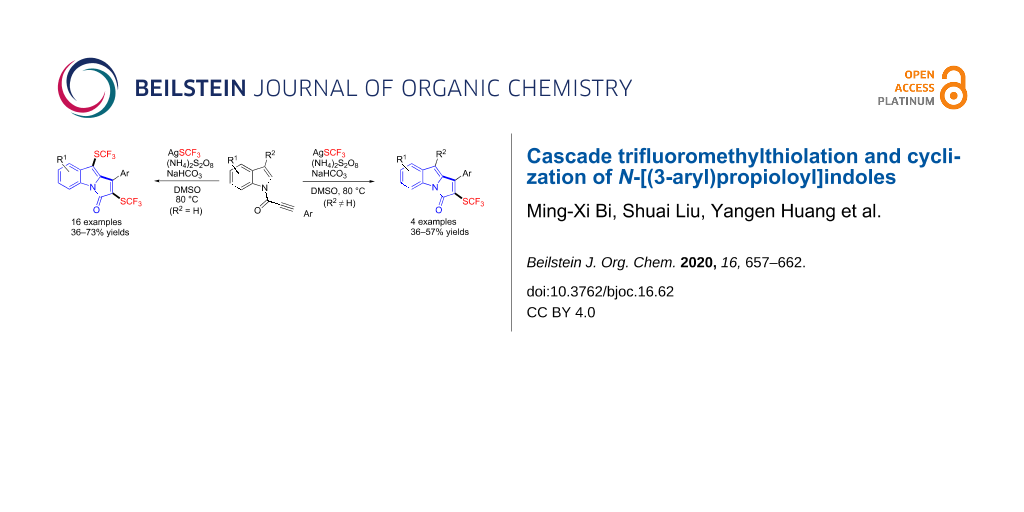