All articles from this author
Nawaf Al-Maharik

This paper describes the synthesis of a series of organic liquid crystals (LCs) containing selectively fluorinated cyclopropanes at their termini. The syntheses used difluorocarbene additions to olefin precursors, an approach which proved straightforward such that these liquid crystal candidates could be efficiently prepared. Their physical and thermodynamic properties were evaluated and depending on individual structures, they either displayed positive or negative dielectric anisotropy. The study gives some guidance into effective structure–property relationships for the design of LCs containing selectively fluorinated cyclopropane motifs.

As a consequence, it continues to be a research objective to introduce polar substituents in a manner that can influence the nature of the dielectric anisotropy of the resultant material. In this context we explore the cyclopropane motif containing fluorine atoms. Selectively fluorinated cyclopropanes have been widely used in pharmaceutical research [11], however, the introduction of fluorinated cyclopropanes into liquid crystal scaffolds has not received much attention. Haufe et al. [12], reported enantiomerically pure fluorinated diphenylcyclopropane carboxylates as potential chiral dopants to induce a cholesteric phase, but this was not extended to the exploration of positive or negative dielectrics. Recently, we reported the efficient synthesis of α,β,β-trifluorocyclopropanes 7 (Figure 2) through difluorocarbene addition to alpha-fluorostyrenes [13]. This used the extraordinary useful method for the generation of difluorocarbene from the Ruppert–Prakash (TMSCF3) reagent [14]. DFT analysis suggests the lowest energy conformer of aryl α,β,β-trifluorocyclopropane 7 orients the C–F bond perpendicular to the aryl ring. So, if the α,β,β-trifluorocyclopropane motif were introduced into an appropriate LC scaffold, it could reasonably induce negative dielectric anisotropy if the dipole associated with the cyclopropane remains oriented perpendicular to the molecular axis. Based on this idea, we report the design and synthesis of cyclopropanes 8 and 9 with an objective to assess their LC properties. Cyclopropane 8 with a single CF2 group offered a control to assess the influence of the alpha-fluorine atom in cyclopropane 9 containing three fluorines. In order to extend the study to explore other selectively fluorinated cyclopropane motifs we set out to prepare liquid crystal candidates 10 and isomers 11a and 11b. Ether 10 should have significant rotational freedom due to rotation around the ether bonds and will be compared with isomers 11a and 11b which are much more conformationally constrained (Figure 2).

Therefore, the aim of the study was to prepare these target liquid crystals and evaluate their properties relative to each other, to establish if there were any obvious structure–activity relationships to emerge for the design of positive or negative dielectric materials. Also the fixed spiro CF2-containing cyclopropanes 11a and 11b became targets to assess the impact of a configurationally rigid bicyclic motif. It is relatively obvious that for each of these isomers the CF2 dipole in each cyclopropane is orientated either along the molecular axis (for 11a) or perpendicular to the molecular axis (for 11b), and these were anticipated at the outset to give positive and negative dielectric anisotropy values, respectively.

The synthesis of cyclopropane 8 started from olefin 12 (supplied by Merck KGaA, Darmstadt), as illustrated in Scheme 1. Difluorocyclopropane 8 can be directly prepared through a [2 + 1] carbene cycloaddition reaction. Thus, treatment of 12 with trimethyl(trifluoromethyl)silane (TMSCF3) and sodium iodide under refluxing conditions [13,14] gave the corresponding product 8 in one step and a 55% yield.

The synthesis of trifluorocyclopropane 9 is shown in Scheme 2. Compound 9 was prepared through bromofluorination of 12, followed by base-induced HBr elimination [15], and then difluorocarbene addition to generate 9. The starting olefin 12 was exposed to an excess of N-bromosuccinimide (NBS) and HF·Py to generate 13a and 13b as a mixture of regioisomers in a ratio of 4:1. There was no requirement to separate these isomers at this stage. Subsequent addition of potassium tert-butoxide into a mixture of 13a and 13b in dichloromethane (DCM) resulted in an efficient elimination to generate vinyl fluoride 14 as a major product. Vinyl fluoride 14 was purified by column chromatography in a 42% yield over the two steps. Finally, difluorocarbenene (:CF2) addition using the TMSCF3/NaI protocol was used to generate the target product 9 in 46% yield.

The preparation of cyclopropyl ether 10 was accomplished as illustrated in Scheme 3. Reduction of cyclohexanone 15 with NaBH4 gave cyclohexanol 16 in a ratio of 2:1. The major trans product 16a was purified as a single entity by column chromatography and was isolated in 45% yield. Vinyl ether 17 could be efficiently prepared using the methodology developed by Bosch [16]. Accordingly, treatment of 16a with butyl vinyl ether, bathophenanthroline (BPhen) and Et3N, using palladium(II) trifluoroacetate as a catalyst, gave vinyl ether 17 in 62% yield in a single step. Finally, difluorocarbene-mediated difluorocyclopropanation generated 10 in 50% yield.

The synthesis of the diastereoisomers of spiro LC candidates 11a and 11b also started from ketone 15 as illustrated in Scheme 4. Treatment of ketone 15 with methylenetriphenylphosphine which was generated in situ from methyltriphenylphosphonium bromide (PPh3CH3Br), generated exo-methylene cyclohexane 18 in a very straightforward manner, and the product could be isolated by chromatography in 72% yield [17]. This olefin was then subject to a difluorocarbene cyclopropanation using TMSCF3 and NaI, and this generated both isomers, 11a and 11b, in a ratio of 5:1, respectively. After three recrystallizations, the major isomer 11a could be isolated as a single stereoisomer. It proved impossible to isolate a sample of isomer 11b without a significant and dominant contamination with 11a. Thus, it was with some frustration that we were unable to prepare a suitable sample, both in quantity and purity, of isomer 11b for subsequent analysis. Stereoisomer 11a was a crystalline solid and a suitable crystal was subject to X-ray structure analysis and the structure is shown in Scheme 4. In this way the stereochemistry of 11a and 11b could be confirmed unambiguously.

Evaluation of liquid crystal candidates 8–11a

With the four difluorocyclopropanes 8–11a in hand, our attention focused on an experimental evaluation of their thermodynamic and physical properties, such as birefringence (Δn) and dielectric anisotropy (Δε). DSC and POM analysis (Table 1) indicated that only compounds 8 and 9 exhibited smectic phases. The smectic phase of LC 8 was maintained over a broad temperature range (54–84 °C), whereas that for 10 and 11a only showed a melting point and these compounds did not display any obvious liquid crystallinity (Table 1). Therefore, any development of these latter materials would require extended core structures to enhance their LC potential.

The birefringence Δn (Table 2) for compounds 8–11a was measured (Abbe refractometer). In all cases the Δn values were low, which is entirely consistent with their core aliphatic structures, unlike materials with aromatic rings. The differences for Δn for 8, 9 and 10, were found to be small, whereas the spiro-cyclopropane 11a had a significantly, decreased Δn.

As discussed, either positive or negative dielectric anisotropy is an important parameter related to the driving voltage of LC displays and in order to reduce energy consumption, good materials should induce a large value for dielectric anisotropy. Compounds 8 and 9 were found to exhibit the expected negative Δε values, however, the overall polarity is low (8 = −0.5, 9 = −0.2). This is presumably due to the ability of the C–C bond attached to cyclopropane to rotate, and thus the compound will adopt conformations with low overall molecular polarities. A comparison of the Δε for 8 and 9 illustrates that incorporation of the third alpha-fluorine lowers the overall Δε value. This is presumably due to a resulting decrease in the overall molecular dipole moment (

) along the minor axis. When an ether was used as the linkage in compound 10, the compound becomes more flexible and, perhaps surprisingly, the overall Δε parameter became more positive. Clearly the effect of introducing a C–O bond renders this molecule dissimilar from the others in this series. However, changing the core aliphatic structure to the more rigid spiro structure 11a, brought about a dramatic enhancement of the molecular dipole moment (μ||), resulting in a much more positive and increased parameter value (Δε = 4.8). This experimental value was close to the predicted calculated value (Δε = 4.3) as shown in Table 2. It is clear that there is an advantage in a rigid structure for imparting a maximum polarity. As stated above, we were unable to obtain a stereochemically pure sample of diastereoisomer 11b, free from 11a, however, theory indicates that 11b should display negative dielectric anisotropy, although the magnitude of the parameter was relatively low (Δε = −1.1). Thus the two isomers constitute two different classes of LC materials, entirely as a consequence of stereochemistry.

In conclusion, a series of candidate liquid crystals 8–11a with difluorocyclopropane motifs at their termini were prepared in a straightforward manner. In all cases the cyclopropane was introduced by difluorocarbene addition to an olefin, the difluorocarbene being generated from TMSCF3/NaI. An evaluation of the physical properties of LC candidates 8–11a revealed that LC’s 8 and 9 exhibited smectic phases with low levels of negative dielectric anisotropy. The relatively high positive dielectric anisotropy of compound 11a indicates that the configurational constrained motif is required to increase the magnitude of the Δε parameter. Although it proved challenging to isolate a stereochemically clean sample of isomer 11b for experimental evaluation, theory predicts that it will have a modest negative dielectric value, indicating the importance of stereochemistry in dictating the class of LC material. We conclude too that the overall performance of prototype LCs 11a and 11b should not be compromised by conformational flexibility. Although none of the compounds prepared here met all of the criteria for commercial development, the study gives an insight into the potential for this novel difluorocyclopropane motif in liquid crystal design and development.

The EPSRC Mass Spectroscopy Service at Swansea is acknowledged for analysis.

We thank the Chinese Scholarship Council for a studentship (ZF).

© 2020 Fang et al.; licensee Beilstein-Institut.
This is an Open Access article under the terms of the Creative Commons Attribution License (http://creativecommons.org/licenses/by/4.0). Please note that the reuse, redistribution and reproduction in particular requires that the authors and source are credited.
The license is subject to the Beilstein Journal of Organic Chemistry terms and conditions: (https://www.beilstein-journals.org/bjoc) 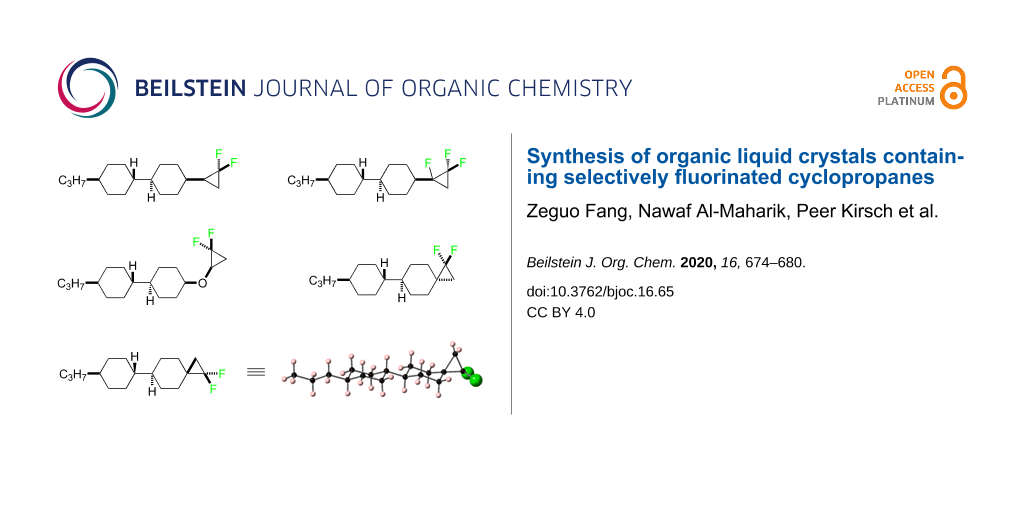