All articles from this author
ZhiHua Zhang


All articles from this author
Yufan Meng


All articles from this author
KaiLi Zhu


All articles from this author
LiYi Chen


All articles from this author
ChangXiang Yu


All articles from this author
ChangWei Yu


All articles from this author
ZiYi Fu


All articles from this author
DianShen Yang


All articles from this author
YiXia Gong

Glycyrrhizin was the major bioactive component in Glycyrrhiza uralensis fisch root. 18β-glycyrrhetinic acid (1, Figure 1) was then obtained by hydrolysis of glycyrrhizin. 18β-glycyrrhetinic acid and its derivatives have been extensively investigated in medicinal chemistry for their various biological activities, including anti-inflammatory [1], antiulcer [2], antioxidative [3], antitumor [4], and antibacterial [5] activity and their proberties as hepatic protective agents [6].

Besides, the C-30 carboxyl group is often esterified or amidated in order to enhance the antitumor or other efficacy of 18β-glycyrrhetinic acid derivatives [11]. A novel piperazinyl amide b exhibits the optimal inhibitory activity against MCF-7 and can be further developed as a potent VEGFR2 and antitumor agent [12].

Piperazinyl amide fragments have the ability to form several hydrogen bonds, modulate the acid–base equilibrium constant and change the octanol–water partition coefficient [13]. They are considered as the basic motif for designing many biologically active molecules [14,15]. Some piperazinyl amides of 18β-glycyrrhetinic acid (c) are synthesized using various methods. A method involves the C30-position of the acyl chloride with symmetric piperazine [16,17]. In this case, the acyl chloride can be prepared without purification, and the total yield over two steps can reach 81% [16]. Such structures (c) can also be formed by treating the C30 carboxyl group with piperazine in the presence of activators (e.g., 1-ethyl-3-(dimethylaminopropyl)carbodiimide hydrochloride (EDCl), 1-hydroxybenzotriazole (HOBt) and trimethylamine [18]), the yield of piperazinyl amide derivatives was 80.6% [19]. These two methods are complicated through the side formation of bisamide, obviously, due to the competitive attack on the N atoms of the symmetric diamine. An alternative method [12] to prepare such piperazinyl amides (c) involves the amidation of 18β-glycyrrhetinic acid with 4-substituted phenylpiperazines in the presence of N,N-dicyclohexylcarbodiimide (DDC) and HOBt. Under such reaction conditions, the bisamide as byproduct can be evitable, whereas the substituted piperazine compounds will not be readily available.

In principle, an efficient approach to the synthesis of structural analogues of (c) is based on the reaction of carboxylic acid with N-Boc-protected aliphatic diamine in the presence of activators and then deprotection of the tert‐butoxycarbonyl (Boc) group using trifluoroacetic acid (TFA) [20]. Compared with the mentioned methods, the latter method achieves the higher yield (up to 90%) without the formation of byproducts [21].

Given the flexible 18β-glycyrrhetinic acid scaffold in the design of biologically active compounds, a novel and efficient method was reported to prepare C3 ester derivatives or/and C30 piperazinyl amides (c).

18β-Glycyrrhetinic acid belongs to the class of ursane-type pentacyclic triterpenoids, and the synthetic methods studied here can also apply to the modification of structurally similar other triterpenoic acids, but further experimental verification is needed.

In the beginning, the reaction of acyl chloride 3 with piperazine was taken as a prototypical case to ascertain and screen the experimental conditions. First, the solution with intermediate 3 was cooled to 0 °C, and triethylamine (1.1 equiv) as well as piperazine (3.0 equiv) were added. After 30 min of stirring, the solvent was removed in vacuo and the residue was purified by column chromatography to afford amide 4 and bisamide 5. When increasing the amount of piperazine, relatively high yields of amide 4 would be achieved (Table 1, entries 1–3). Given the high reactivity of the acyl chloride with piperazine, we decided to verify the feasibility of the feeding sequence in a model system. The solution with intermediate 3 was added dropwise to a solution of piperazine in 30 mL of dichloromethane (DCM). After the solutions were mixed, intermediate 3 was surrounded by piperazine molecules. The excess of piperazine could sufficiently avoid the formation of bisamide 5 (Table 1, entry 4). When intermediate 3 was dissolved in more DCM (100 mL), less side reactions occurred and the product was obtained in higher yield (Table 1, entries 4 and 5). By altering the amidation reaction temperature, the yield of amide 4 showed an obvious variation. A reaction temperature led to excessive bisamide 5 (Table 1, entry 6). The results of the experiments demonstrated that the side reaction was inevitable, and the amount of bisamide 5 produced was dependent on the reaction temperature and material ratio. The isolation and purification of product 4 were significantly more difficult, causing an unavoidable loss of target compound as well.

The observation described in Scheme 1 and Table 1 led us to consider a new approach for preparing the piperazinyl amide 4 (Scheme 2). Two general procedures for the synthesis of compound 8 are documented. One method involves acetylation of 18β-glycyrrhetinic acid, followed by amidation of the resulting ester 2 to give compound 8. Finally, the piperazinyl amide 4 was synthesized by of N-Boc deprotection.

Another procedure for the synthesis of compound 8 involves acylation of compound 9, which was prepared by the reactions of 18β-glycyrrhetinic acid with 1-Boc-piperazine under similar reaction conditions. Compound 8 was prepared in virtually quantitative yield from compound 9 with acetic anhydride without solvent at 130 °C. The acetic acid formed in the reaction need not be neutralized and can escape from the reaction system. The reaction gave the optimal yield at 125–135 °C. When the temperature was below 125 °C, compound 9 did not reacted completely after 48 h (TLC monitoring).

The reaction from 2 to 8 proceeded via the intermediate 6, which can be isolated. The intermediate 6 did not react with 1-Boc-piperazine in low boiling point solvents even after an extended reaction time (up to 72 h). Heating the reaction using conventional or microwave methods had no effect on the conversion of intermediate 6 to compound 8.

To explain the stable structure of the intermediate 6 (Figure 2a), energy minimization by MM2 was performed using the ChemBio3D Ultra 14.0 (CambridgeSoft Corporation, 2014) software force field [22]. The estimated structure was supported by crystal structures of similar structural compounds [23]. Figure 2b suggests that the steric hindrance around the C30 ester group of intermediate 6 has a remarkable influence on the aminolysis reaction. The mechanism of the aminolysis reaction revealed that a higher reaction temperature of the solvent mixture contributed to the synthesis of compound 8.

To promote the yield of compound 8 and improve the overall yield of the reaction, an optimization of the reaction conditions was performed (Table 2). First, by using low boiling point solvents, only low or no yields (<19%) of the desired compound 8 were obtained after a longer reaction time (Table 2, entries 1–4). A further investigation of the reaction using microwave irradiation to heat at reflux temperature also failed to produce the target product (Table 2, entry 2). The intermediate 6 exhibited very low solubility in ethyl acetate solution, thereby directly causing the incomplete conversion of the substrate over several days (Table 2, entry 5). The reaction performed in acetonitrile as solvent achieved an excellent yield within 10 h but still with a small amount of intermediate 6 (Table 2, entry 6). Besides, N,N-dimethylformamide (DMF), a solvent with a higher boiling point than acetonitrile, was also tested, yet the reaction led to the formation of unknown compounds (TLC monitoring, Table 2, entry 7).

After screening several solvents, the optimal yield was obtained in acetonitrile, though a small amount of unconverted intermediate 6 was observed in the reaction mixture (Table 2, entry 6). Next, the reactivity of compound 2 with 1-Boc-piperazine in a 1:1.5 ratio was investigated. The reaction did not proceed completely in acetonitrile at reflux temperature, even after the period was prolonged to 48 h. In contrast, 1-Boc-piperazine (2.5 equiv) exhibited high performance, thereby leading to the preparation of compound 8 in 95% yield (Table 2, entry 8), which essentially completed conversion of the intermediate 6 within 10 h.

Alternatively, the aminolysis reaction of the isolated intermediate 6 with 1-Boc-piperazine (2.5 equiv) without any other additives can readily proceed in acetonitrile at reflux temperature in 95% yield.

In another reaction, 18β-glycyrrhetinic acid was smoothly esterified with chloroacetic anhydride at the C3-OH group to form compound 12 in a quantitative yield. The reaction was completed in 30 min. The principal advantages of this method are that there is no solvent required, and that the reaction time is shorter than in previous cases [16], since the acid formed during the reaction may catalyze the esterification reaction of 18β-glycyrrhetinic acid with chloroacetic anhydride.

Having accessed compound 12, many other new compounds can also be prepared by replacing an amine with the halogen atom. With compounds 12 and 15 in hand, we then tried to synthesize target compound 17 (Scheme 4), which is a novel 18β-glycyrrhetinic acid derivative to biologically active substances.

According to the first method, compound 12 reacted with morpholine in the presence of K2CO3/I2 to give compound 13, followed by successive amidation and N-Boc deprotection gave compound 17. It is noteworthy that the carboxyl group of compound 12 did not react with inorganic bases, such as K2CO3, Na2CO3, NaHCO3, etc.

After the C3 position has been converted to a stable ester structure, the piperazinyl amides of 18β-glycyrrhetinic acid can be also converted to novel unsymmetrical amides. For example, treatment of compound 4 with acyl chloride in dry DCM under alkaline conditions directly afforded 18β-glycyrrhetinic acid derivative 18. The molecular structure of compound 18 in the crystalline state is shown in Figure 3. In this crystal structure, there is an orientational disorder of the m-fluorophenyl moiety due to the rotation of a single bond. Details for the crystal structure determinations are given in Table 4.

Detailed synthetic procedures for all new compounds including copies of their NMR spectra can be found in Supporting Information File 1.

Formation of an unexpected 3,3-diphenyl-3H-indazole through a facile intramolecular [2 + 3] cycloaddition of the diazo intermediate

© 2020 Cai et al.; licensee Beilstein-Institut.
This is an Open Access article under the terms of the Creative Commons Attribution License (http://creativecommons.org/licenses/by/4.0). Please note that the reuse, redistribution and reproduction in particular requires that the authors and source are credited.
The license is subject to the Beilstein Journal of Organic Chemistry terms and conditions: (https://www.beilstein-journals.org/bjoc) 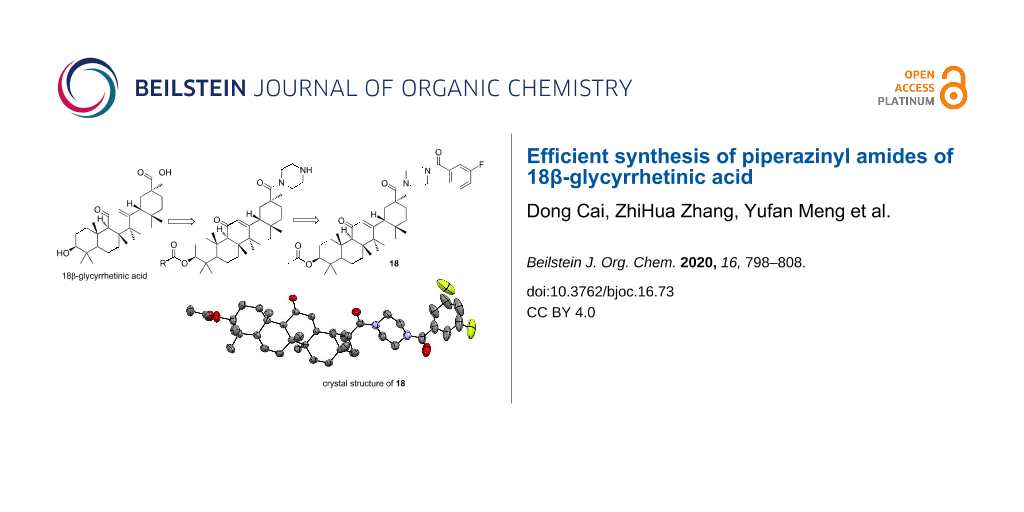