All articles from this author
Zhiling Xu

Baicalein (5,6,7-trihydroxyflavonoid) has a molecular formula of C15H10O5 (BALE, Figure 1) and is a natural flavonoid found in the roots of Scutellaria baicalensis Georgi [1]. The compound displays pharmacological activity such as antimicrobial, anti-inflammatory, anti-allergic, antispasmodic, diuretic and anticancer [2-24]. For example, baicalein can play an antitumor effect on lung cancer by inducing cell apoptosis, blocking cell cycle and inhibiting metastasis of lung cancer, but it has a strong activity to eliminate superoxide radicals in cell-free systems [25]. It is also considered as an anti-inflammatory agent [26,27] that generally protects against oxidative stress [28], more specifically in cardiac cells [29], and in cisplatin-induced acute kidney injury [30]. However, baicalein contains three phenolic hydroxy groups, which are easily oxidized to the quinone derivative and appear green, therefore, it has limited use in pharmaceuticals on account of its poor aqueous solubility and stability [31].

The cucurbit[n]urils (Q[n]s n = 5–8, 10, …) are macrocyclic hosts with a hydrophobic rigid cavity [32] (Figure 1). cucurbit[n]urils have a unique combination of properties including rigid highly symmetric structures, relatively large hydrophobic cavities and high thermal and chemical stability [33,34]. Cucurbit[n]urils are a type of macrocyclic drug carrier similar to macrocyclic compounds such as calixarenes, crown ethers and cyclodextrins, which can be used to form a stable inclusion complex with the drug, and improving the bioavailability of the drug [34,35]. Herein, we describe the results of the investigations of host–guest interactions between BALE and Q[8] in an aqueous solution using 1H NMR, UV–vis and IR spectroscopy, and DTA. The properties of the BALE–Q[8] inclusion complex, such as stability, solubility, in vitro antioxidant activity and release performance were studied by means of UV–vis spectroscopy.

Q[8] and BALE in the host–guest interaction packing and pattern are shown in Figure 2. 1H NMR spectroscopy is usually one of the most effective methods to characterize host–guest interactions and can be used to deduce the mode of action of the cucurbit[n]uril–guest according to the chemical shift of the proton resonances. The size of the Q[8] cavity is larger than that of the guest (BALE), therefore the frequency of dissociation and inclusion of BALE by Q[8] was faster than the working frequency of the NMR instrument [36-40]. The 1H NMR spectra of BALE–Q[8] show only averaged proton resonances. Chemical shift changes of certain proton resonances of the guest or host upon increasing or decreasing the equivalents of the guest or host can be used to study the host–guest interactions. Figure 3 shows the 1H NMR spectra of BALE in the absence (b) and in the presence of 1.0 equiv of Q[8] (c). After adding Q[8], the H3, H2', H3', H4', H5' and H6' protons of the guest BALE underwent an upfield shift, but H8 exhibited a downfield shift (Table 1). The 1H,1H-NOESY spectrum reveals the close relationship between the intramolecular protons in space (Supporting Information File 1, Figure S1). This suggested that Q[8] included cycle B and part of cycle C of BALE into its cavity.

To quantitatively determine the ratio of the host–guest inclusion complexes formed from Q[8] and the guest, the UV spectra of different aqueous solutions containing a fixed concentration of the guest (20 μmol·L−1) and variable concentrations of Q[8] were recorded (Figure 4A–C). Figure 4 shows the changes in the UV–vis spectra of BALE upon the gradual addition of Q[8]. The maximum absorption wavelength of BALE was at 270 nm and the host showed no absorbance in the range of >210 nm. The absorption spectra of the guest exhibited a progressively higher absorbance with a slight red shift as the molar ratio of NQ[8]/NBALE increased. The absorbance (Figure 4A–C) vs molar ratio of the host Q[8] and guest (NQ[8]/NBALE) was fitted to a 1:1 binding model to afford the association constants (K) [2.15 × 107 L·mol−1 (10 mol·L−1 HCl), 3.59 × 107 L·mol−1 (10-2 mol·L−1 HCl) and 3.4 × 105 L·mol−1 (neutral water)]. When compared with the change observed in the spectra recorded in 10 mol·L−1 HCl, 10−2 mol·L−1 HCl and water, the same interactive model was observed. The existence of clear isosbestic points and the Job’s plot (Figure 4D) supported the formation of a 1:1 host–guest inclusion complex. Q[8] and BALE in the host–guest interaction package and pattern are shown in Figure 2.

The IR spectra recorded for the interaction of Q[8] with BALE are shown in Figure 5. It shows the IR spectra of Q[8] (a), BALE (b), a physical mixture of Q[8] and BALE (N(Q[8])/N(BALE) = 1:1) (c) and the BALE–Q[8] inclusion complex (d). Spectrum (c) was a simple superposition of BALE (a) and Q[8] (b), there was no interaction observed in the physical mixture. When compared to spectra (c) and (d), there were two absorption peaks observed at ≈3030 cm−1 corresponding to the stretching vibration of the two aromatic rings in BALE, but the complexes had only one absorption peak. In the range of 1650–1550 cm−1 were two absorption peaks for the two benzene ring stretching vibrations of BALE and the peak disappearance observed in the inclusion complex, which may be caused by Q[8]. In addition, there were differences in the fingerprint region of the benzene ring. In spectrum (d), the peaks at 704, 778 and 898 cm−1 for the guest disappeared due to the inclusion of Q[8] and the molecular microenvironment of BALE being changed.

The effect of cucurbit[8]uril on baicalein properties

BALE has three phenolic hydroxy groups, which are easily oxidized to a quinone-type structure. The time-resolved UV–vis absorption spectra of BALE showed that the stability of BALE in water was poor in the absence of Q[8], whereas the stability of BALE was greatly improved in the presence of Q[8]. At the same concentration of BALE and the Q[8]–BALE complex, the free BALE absorption value, after 6 h, decreased by 0.1 or less (Figure 7) and the decomposition curve equation was A = 0.4730 – 0.0003t. However, the UV absorption intensity of the inclusion complex remained basically unchanged, very stable and the decomposition curve equation was A = 0.4353 − 0.00004t. Therefore, the stability of the BALE–Q[8] inclusion complex in the same solvent was 7.5 times higher than that of BALE.

When comparing the interactions of chrysin [45] and baicalin [46] with Q[8] previously reported by our group, they showed different interaction models. Chrysin is totally inserted into the cavity of Q[8], and due to the fact that the hydroxy groups of the glucoside of baicalin and Q[8] fare forming hydrogen bonds, the cycle B and and a part of cycle C of baicalin inserted into the cavity of the Q[8]. This may be attributed to chrysin containing one hydroxy group less than baicalein, which reduced the hydrophilicity of cycle A, making it enter into the hydrophobic cavity of Q[8] easily. Because the hydroxy group on the carboxylic acid of the baicalin formed a hydrogen bond with the oxygen atoms of Q[8] at the portal, cycle C of baicalin was pushed into the cavity of Q[8]. Therefore, the inclusion model of cucurbit[8] with flavonoid compounds was determined by the structure of the specific flavonoid.

In this study, our results showed that BALE formed an inclusion complex (1:1) with cucurbit[8]uril. The inclusion constants of BALE with Q[8] obtained from the UV–vis absorption data was 2.15 × 107 L·mol−1 (10 mol·L−1 HCl), 3.59 × 107 L·mol−1 (10−2 mol·L−1 HCl) and 3.4 × 105 L·mol−1 (neutral water). The solubility of BALE increased 4.67-fold in the phase-solubility experiment when the concentration of Q[8] was 1 × 10−4 mol·L−1. A study of the UV–vis absorption spectra with time showed that Q[8] significantly increased the stability of BALE. The antioxidant activity of BALE–Q[8] was investigated using the ABTS+· method. The BALE–Q[8] inclusion complex had no significant influence on the scavenging effect toward ABTS+· radicals when compared to BALE; the IC50 vales were 1.87 × 10−6 mol·L−1 and 2.14 × 10−6 mol·L−1, respectively. In vitro release studies have shown that the release rates of the BALE–Q[8] complex is slower than that of BALE in artificial intestinal juice, but it is faster than BALE in artificial gastric juice. Our results provide a new approach and theoretical basis for the development and utilization of baicalein.

© 2020 Zhang et al.; licensee Beilstein-Institut.
This is an Open Access article under the terms of the Creative Commons Attribution License (https://creativecommons.org/licenses/by/4.0). Please note that the reuse, redistribution and reproduction in particular requires that the authors and source are credited.
The license is subject to the Beilstein Journal of Organic Chemistry terms and conditions: (https://www.beilstein-journals.org/bjoc) 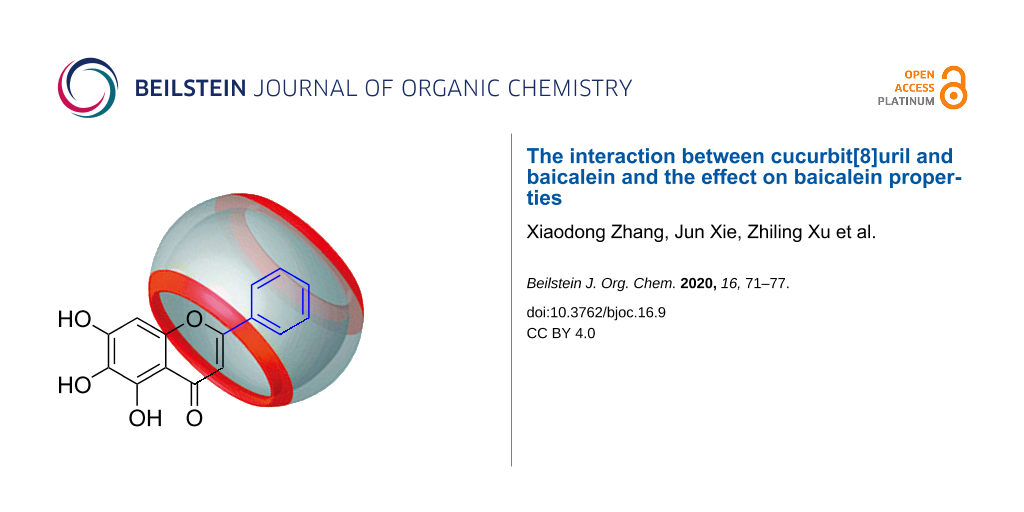