Carbometalations of alkynes constitute a powerful tool for the regio- and stereoselective formation of carbon–carbon bonds [19]. Intramolecular palladium-catalyzed versions are particularly attractive, since they afford polycarbo- and heterocyclic systems via sequential reactions of the vinylpalladium intermediate [20-25]. In this field, a variety of regio- and stereoselective Pd-catalyzed cascade reactions, consisting of the addition of in situ-generated arylpalladium complexes over a proximate carbon–carbon triple bond, followed by cross-coupling reactions, have been reported [26-31].

Our continuing interest in the palladium-catalyzed reactions of functionalized alkynes with boronic acids [32,33] prompted us to explore the palladium-catalyzed reaction of the readily available alkynyliodobenzamides 2 with boronic acids 3 as a viable route to the regio- and stereoselective synthesis of 4-alkylidene-3,4-dihydroisoquinolin-1(2H)-ones 3 (Scheme 1a).

We are pleased to report here that this cascade reaction takes place efficiently, resulting in the regio- and stereoselective formation of the poly-substituted isoquinolinones 4 in good to high yield. Applications of this reaction can be relevant for improvements of structure diversity and fine tuning of the chemical and physical properties of the products.

Furthermore, over the years, we have reported a general methodology for the Pd-catalyzed synthesis of 3-substituted indoles, now referred to as the “Cacchi reaction” [34], through an aminopalladation/reductive elimination sequence starting from 2-alkynyltrifluoroacetanilides. In all these procedures, the activation of the triple bond was achieved by means of a σ-organyl palladium complex, in turn generated in situ by oxidative addition of a Pd(0) species to suitable organic electrophiles (aryl and vinyl halides or triflates [35,36], alkyl halides [37], alkynyl halides [38], α-iodoenones [39], or by transmetalation of a Pd(II) species with boronic acids [33]. In this context, we decided to explore the use of substrates 2 in the reaction with 2-alkynyltrifluoroacetanilides 5 through a sequential cyclocarbopalladation/aminopalladation/reductive elimination process, widening in such a way the scope of the methodology and allowing challenging synthesis of indoles 6 bearing a 4-alkylidene-3,4-dihydroisoquinolin-1(2H)-one substituent (Scheme 1b). It is worth noting that an aerobic Pd/Cu-catalyzed cyclizative cross-coupling between 2-alkynylanilines and 2-alkynylbenzamides, affording indoles bearing an alkylidene-iminoisobenzofurane moiety, has been reported [40].

The starting N-propargyl-2-iodobenzamides 2 were easily obtained by the reaction of the readily available [41] propargylamines 1 with 2-iodobenzoyl chloride in CH2Cl2 at room temperature (Scheme 2).

Initially, we explored the reaction of the N-(4-(4-acetylphenyl)-2-methylbut-3-yn-2-yl)-N-benzyl-2-iodobenzamide (2a) with a variable excess of the phenylboronic acid (3a) in the presence of K3PO4 as the base (K3PO4: 3 equiv) by using 5 mol % of different palladium catalysts/solvent/temperature combinations. The results are reported in Table 1.

aReactions were carried out on a 0.19 mmol scale, using 3 equiv of base, 0.10 equiv of ligand and 0.05 equiv of the palladium catalyst in 2.0 mL of solvent under nitrogen atmosphere. bYields are given for isolated products. c1.0 mL of solvent.

When 1,4-dioxane was used as the solvent in the presence of commercially available PdCl2(PPh3)2 as the catalyst at 100 °C, the reaction of 2a with 1.5 equiv of the phenylboronic acid (3a) delivered the target (Z)-dihydroisoquinolin-1(2H)-one 4aa in 51% yield. Better yields were observed by increasing the excess of the phenylboronic acid (Table 1, entries 1–3) or by halving the amount of the solvent in the presence 1.5 equiv of 3a (Table 1, entry 4). Under these latter conditions a beneficial effect was obtained by using a 9:1 mixture of 1,4-dioxane/H2O as the reaction medium (Table 1, entry 5). While MeCN, DMF, THF and DMSO as solvents gave worse results (Table 1, entries 6–9), the environmentally friendly EtOH proved to be the most efficient reaction medium (Table 1, entry 10). Further attempts to increase the yield of 4aa by tuning the catalytic system showed that the ligand-free PdCl2 was the most effective catalyst (Table 1, entry 14). Other catalysts such as Pd(PPh3)4, Pd/C or Pd(OAc)2 provided inferior results (Table 1, entries 11–13).

We then examined the reaction of 2a with 1.5 equiv of a variety of arylboronic acids. Using the optimized reaction conditions of Table 1, entry 14, 2a reacted smoothly with diversely substituted arylboronic acids 3a–i to regio- and stereoselectively afford the corresponding tetrasubstituted 4-methylene-3,4-dihydroisoquinolin-1(2H)-ones 4ab–ai in moderate to good yields (Scheme 3).

Gratifyingly, various functional groups such as amino, acetamido, F, Cl, OMe, CF3, and CN moieties were found to be compatible with these reaction conditions, and only the homocoupling of the arylboronic acids was observed as side reaction to some extent [42]. The best results were obtained with arylboronic acids containing electron-donating substituents; electron-poor arylboronic acids proved to be slightly less effective, probably because of their lower nucleophilicity that could have affected the transmetalation step.

Moreover, we screened the reaction of a number of aromatic boronic acids 3a–j with a set of N-propargyl-2-iodobenzamides 2c–f (Scheme 4).

All reactions successfully delivered the desired products 4 in moderate to good yields. Remarkably, an alkyl substituent was tolerated at the terminal sp carbon atom of the starting N-propargyl-2-iodobenzamides 2. Furthermore, 2-iodobenzamides 2e and 2f (mono-substituted and unsubstituted at the propargylic position) were successfully used as starting materials, affording the corresponding products 4eb, 4fc and 4fj in good yields. According to the literature, the highly stereoselective formation of products 4 resulted from the intramolecular syn-addition of the in situ-generated arylpalladium iodide complex to the triple bond to give an (E)-vinylpalladium intermediate, which underwent cross-coupling with an arylboronic acid leading to the final product by reductive elimination, with the regeneration of the Pd(0) catalyst.

Finally, we envisaged that the above mentioned (E)-vinylpalladium intermediate A (generated in situ from the insertion of a carbon–carbon triple bond in the initially formed arylpalladium complex) could also be involved in the aminopalladations with the alkynyltrifluoroacetanilides 5 through the formation of the π-complex B, followed by base-assisted cyclization and reductive elimination from the resulting σ-indolylpalladium complex C (Scheme 5).

The reaction led to the stereoselective formation of indole derivatives 6ba–fc (aryl, heteroaryl and vinyl groups were allowed in substrates 5) in good to high yield.

The stereochemistry of compounds 4 and 6 was unambiguously confirmed by NMR spectroscopy [43].

In conclusion, we have demonstrated that cascade cyclocarbopalladations of the readily available aryl/alkyl-substituted N-propargyl-2-iodobenzamides 2 followed by Suzuki–Miyaura coupling reactions with arylboronic acids, in the presence of a catalytic amount of the ligand-free PdCl2 in environmentally friendly ethanol, achieve an efficient regio- and stereoselective synthesis of 4-methylene-3,4-dihydroisoquinolin-1(2H)-ones 4. It is worth noting that, during the preparation of this paper, a related article focused on the palladium-catalyzed regioselective cascade cyclization of propargylamides/coupling with ArB(OH)2 in dioxane/water, to give trisubstituted arylidene-isoquinolinones [44] was published. However, the Ugi four-component reaction used to construct the starting building blocks was limited to the preparation of propargylic 2-halobenzamides unsubstituted at the propargyl carbon, allowing the synthesis of isoquinolinones without substituents at C-3; but the present methodology overcame these limitations.

Moreover, the previously developed strategy of indole synthesis through an aminopalladation/reductive elimination process has been significantly extended to include σ-vinyl Pd(II) intermediates B obtained through oxidative addition/insertion of substrates 2 with Pd(0). This reaction efficiently led to challenging indoloquinolinones 6 through a sequential double cyclization. It is worth noting that, in both cases, the intramolecular alkyne insertion in the initially formed arylpalladium iodide A (leading to B) occured faster than the direct reaction of A with arylboronic acids or with 2-alkynyltrifluoroacetanilides.

Melting points are uncorrected. IR spectra were recorded with a Perkin Elmer Spectrum Two FT/IR spectrometer. 1H NMR spectra were recorded in CDCl3 at 400 MHz on Bruker Avance 400 instrument. Chemical shifts (in ppm) were referenced to tetramethylsilane (δ = 0 ppm) as an internal standard. 13C NMR spectra were recorded in CDCl3 at 100.6 MHz and were calibrated with CDCl3 (δ = 77.00 ppm) or tetramethylsilane (δ = 0 ppm). Mass spectrometry was performed using a MALDI–TOF spectrometer AB SCIEX TOF/TOF 5800 system using 3-hydroxycoumarin or α-cyano-4-hydroxycinnamic acid as a matrix in combination with KI for the ionization. Unless otherwise stated, all starting materials, catalysts, and solvents were commercially available and were used as purchased. The reaction products were purified by flash chromatography on silica gel by elution with n-hexane/EtOAc mixtures. Compounds 1a [44], 1b,c [41], 1d [45], 1e [46] and 5a–c [47] are known products and were identified by comparison of their physical and spectral data obtained with those reported in the cited references.

Typical procedure for the preparation of N-benzyl-2-iodobenzamides (2a–f): To a solution (0.25 M) of the propargylamine 1 (1 equiv) [48] in anhydrous dichloromethane (5 mL) were added at room temperature, under N2 atmosphere, 2-iodobenzoyl chloride (1.5 equiv) and anhydrous triethylamine (2 equiv). The reaction mixture was stirred under N2 until complete consumption of the starting propargylamine (monitored by TLC). Then the reaction mixture was diluted with ethyl acetate, washed with a solution of NH4Cl (0.5 M), dried over Na2SO4 and concentrated under reduced pressure. The residue was purified by flash chromatography (silica gel, n-hexane/EtOAc) to afford the N-benzyl-2-iodobenzamide 2.

General procedure for the preparation of indole-substituted dihydroisoquinolin-1(2H)-ones 6: To a stirred solution of propargylamide 2 (0.1 mmol) in MeCN (2 mL) were added 2-alkynyltrifluoroacetylanilide 5 (0.12 mmol) and K2CO3 (0.3 mmol); after 5 min stirring at room temperature Pd(PPh3)4 (0.005 mmol) was added. The mixture was stirred at 80 °C under N2 atmosphere until complete consumption of the starting propargylamide (monitored by TLC). Then the reaction mixture was cooled to room temperature, diluted with ethyl acetate, washed with a 0.5 M solution of NH4Cl, dried over Na2SO4 and concentrated under reduced pressure. The residue was purified by flash chromatography (silica gel, n-hexane/EtOAc, 80:20–50:50 v/v) to afford the desired dihydroisoquinolin-1(2H)-one 6.

We gratefully acknowledge the University of L’Aquila for financial support.

© 2020 Nori et al.; licensee Beilstein-Institut.
This is an Open Access article under the terms of the Creative Commons Attribution License (http://creativecommons.org/licenses/by/4.0). Please note that the reuse, redistribution and reproduction in particular requires that the authors and source are credited.
The license is subject to the Beilstein Journal of Organic Chemistry terms and conditions: (https://www.beilstein-journals.org/bjoc) 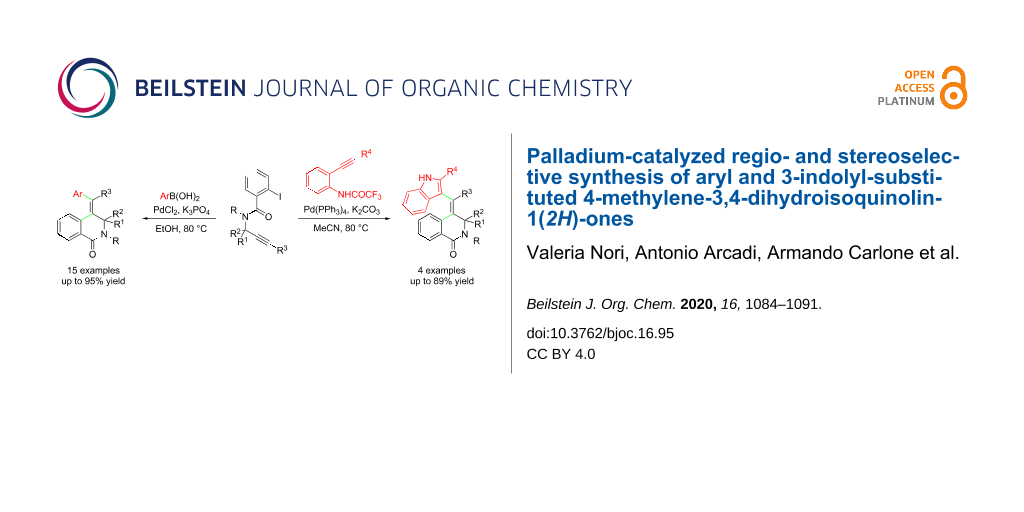