Cerium-photocatalyzed aerobic oxidation of benzylic alcohols to aldehydes and ketones


All articles from this author
Sumit Kumar


All articles from this author
Jessica Stahl

We have developed a cerium-photocatalyzed aerobic oxidation of primary and secondary benzylic alcohols to aldehydes and ketones using inexpensive CeCl3·7H2O as photocatalyst and air oxygen as the terminal oxidant.

The selective oxidation of alcohols to carbonyl compounds [1,2] is an important process for producing a wide range of value-added fine chemicals [3-6]. In the traditional oxidation process stoichiometric amounts of oxidants such as Br2, MnO2, hypervalent iodine reagents, chromium-based reagents, activated dimethyl sulfoxide, KMnO4, OsO4, or metal-based catalysts and peroxide were used [7-17]. Most of these protocols produce harmful waste and some of the oxidizing reagents are considered toxic [7-17]. In order to overcome the limitations, various homogeneous and heterogeneous catalytic oxidation systems have been reported. Aerobic oxidation is particularly attractive as it allows the transformations under mild reaction conditions with molecular oxygen acting as the terminal oxidant [13-33]. Most aerobic oxidation reactions utilize either metal complexes and nanoparticles or persistent radical reagents as catalysts [21].

In the past ten years, visible light-induced photocatalysis has emerged as an alternative to the classical conventional synthetic methods to construct carbon–carbon and carbon–heteroatom bonds [34-37]. As a mild, efficient, and environmentally friendly approach it has the potential to unlock unique reactions that are previously inaccessible under thermal conditions. Significant advances were made for the oxidation of benzylic alcohols by using metal-based photocatalysts [38-46] and metal-free photocatalysis [47-53] in combination with various oxidants, such as TBHP and DDQ [54,55]. However, the reported methods require either specific nanoparticle catalysts [39-42] or the catalytic method is limited to electron-rich or electron-neutral benzylic alcohols [56]. An operationally simple method avoiding waste and potentially toxic transition-metal catalysts that is able to convert any benzylic alcohol selectively to the aldehyde or ketone is still desirable. Recently, cerium photocatalysis was introduced as a robust alternative to generate oxygen or carbon-centered radicals under mild reaction conditions [57-64]. CeCl3 reacts via ligand-to-metal charge transfer generating oxygen-centered radicals, that lead to carbon-centered radicals through intra/intermolecular hydrogen atom transfer (HAT) processes, radical decarboxylative or radical deformylation [57-59]. In continuation of our research interest on visible-light-driven cerium photocatalysis [59,65], we herein report a mild aerobic photocatalytic oxidation of benzylic alcohols to aldehydes and ketones using 10 mol % CeCl3·7H2O (Scheme 1).

Next, the scope of secondary benzylic alcohols was tested in our reaction conditions. Substituted 1-phenylethanols such as 1z, 1aa, tetralol (1ab), diphenyl methanol (1ac) and derivatives thereof with substituents of different electronic nature such as 1ad and 1ae gave the ketones 2z, 2aa, 2ab, 2ac, 2ad, and 2ae in good yields. However, the primary aliphatic alcohol 3-phenylpropanol (1af) did not provide the desired aldehyde at all, and allylic alcohols such as geraniol (1ag) and cinnamyl alcohol (1ah) afforded the aldehydes 2ag and 2ah in very low yields (5 and 7%, respectively). In addition, when the mixture of 3-phenylproponol (1ah) and 3-bromobenzylic alcohol (1t) was subjected to the standard reaction conditions, we observed the selective oxidation of the benzylic alcohol giving the expected product in 44% yield (Scheme 3).

The efficiency of this cerium-photocatalyzed aerobic oxidation of alcohols prompted us to conduct some preliminary mechanistic studies (Figure 1). As anticipated, the ON/OFF irradiation experiments confirmed that our reaction required a continuous blue light irradiation (see Supporting Information File 1). The inhibition of the catalytic cycle upon the addition of TEMPO revealed that the reaction proceeds through radical intermediates. Next, we carried out UV–vis monitoring experiments in order to verify whether the interaction with the substituted benzyl alcohols and CeIV could lead to a ligand-to-metal charge transfer (LMCT) process, which reduces the CeIV species to CeIII, similarly as reported by Zuo and co-workers [57]. We chose (n-Bu4N)2CeIVCl6 as the CeIV source to ensure a sufficient solubility in organic solvents and to facilitate the detection of the species. The CeIV(OBn)Cln complex was prepared by mixing the (n-Bu4N)2CeIVCl6 complex with BnOH under basic conditions. The UV–vis spectra of the CeIV(OBn)Cln complex displayed a band resembling the LMCT band of known cerium–alkoxide complexes, showing considerable overlap with the blue LED region, thus suggesting that the CeIV(OBn)Cln species could be photoexcited (Figure 1A). We then analyzed UV–vis spectra of the CeIV(OBn)Cln complex recorded after irradiation with blue light at different time intervals. As shown in Figure 1A, the absorption spectrum of the CeIV(OBn)Cln complex gradually shifted from λmax = 375 nm to λmax = 325 nm upon irradiation, which indicates a photoinduced CeIV–OBn homolytic cleavage to generate a CeIII complex and a benzyloxy radical. Although the exact catalytic cycle of our reaction remains to be elucidated, we propose a plausible reaction mechanism based on our observations and known literature precedents (Figure 1B) [57,59,66-69]. Under aerobic conditions the catalytic CeIII(OBn)Ln species I (in situ derived by the reaction of CeCl3 (CeIIILn) with the substrate benzyl alcohol, BnOH) could be oxidized to LnCeIV–OBn complex II [67-69]. During this process O2 is converted into a superoxide radical anion O2•−. Photolysis of the CeIV–OBn complex (II), leads to the formation of the corresponding benzyloxy radical (III) and regenerates the CeIII species. A further abstraction of a benzylic hydrogen atom by the peroxide radical then generates the final product 2 [48]. However, at this moment we cannot exclude the involvement of possible intermolecular HAT or 1,2-HAT from the intermediate III to generate the product 2.

In summary, we have developed a catalytic aerobic oxidation of benzylic alcohols to the corresponding aldehydes without further oxidation and formation of benzoic acids. A variety of primary and secondary benzylic alcohols were converted into the corresponding aldehydes and ketones in good to moderate yields using commercially available and inexpensive CeCl3·7H2O as a photocatalyst and air as an oxidant.

V.R.Y. acknowledges IISER-TVM for the financial support. GSY acknowledges the IISER TVM for the doctoral fellowship. JS thanks the Studienstiftung des Deutschen Volkes for a Ph.D stipend.

© 2021 Yedase et al.; licensee Beilstein-Institut.
This is an Open Access article under the terms of the Creative Commons Attribution License (https://creativecommons.org/licenses/by/4.0). Please note that the reuse, redistribution and reproduction in particular requires that the author(s) and source are credited and that individual graphics may be subject to special legal provisions.
The license is subject to the Beilstein Journal of Organic Chemistry terms and conditions: (https://www.beilstein-journals.org/bjoc/terms) 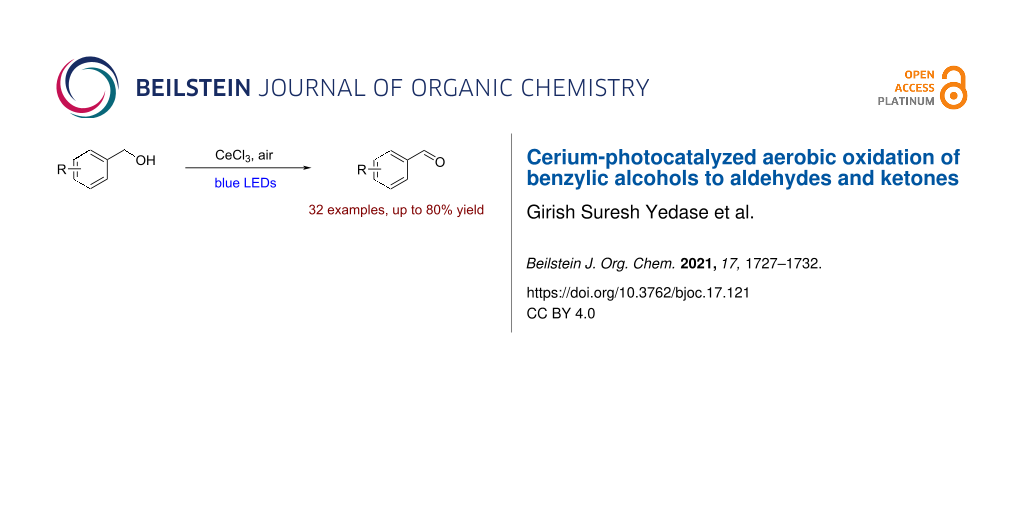