All articles from this author
Bibhisan Roy


All articles from this author
Jens Voskuhl


All articles from this author
Michael Giese

The first example of halogen-bonded fluorescent liquid crystals based on the interaction of iodofluorobenzene derivatives with nitro-cyanostilbenes is reported. The systematic variation of the fluorination degree and pattern indicates the relevance of the halogen bond strength for the induction of liquid crystalline properties. The modular self-assembly approach enables the efficient tuning of the fluorescence behaviour and mesomorphic properties of the assemblies.

In 2014, Tothadi and Desiraju reported on a new supramolecular synthon based on the non-covalent interaction between 1,4-dinitrobenzene and iodobenzene [13]. Their structural analysis of a series of ternary cocrystals revealed that the nitro group is a suitable halogen bond acceptor, which interacts with polarised iodobenzene components in three different geometries – symmetrical, unsymmetrical or sidewise. Many other crystal structures support these findings and suggest the suitability of this synthon for the construction of supramolecular entities [14-17]. However, no examples for supramolecular materials employing this complementary interaction have been reported so far. In the present study we report the first halogen-bonded liquid crystal based on the complementary binding of nitro-cyanostilbene and tetrafluoroiodobenzene derivatives. Therefore, tetrafluoroiodostilbene (F4St) and a series of fluoroiodoazobenzenes (F4Az, F3Az, F2Az, F2’Az) were employed as halogen bond donors and combined with nitro-cyanostilbene (NO2-Cn) as fluorescent halogen bond acceptor (see Figure 1) to form halogen-bonded liquid crystals. The series of fluoroiodoazobenzenes with varying fluorination degree at the iodobenzene moiety was used to investigate the impact of halogen bonding on the properties of the assemblies. Since cyanostilbene molecules are known to show aggregation-induced emission (AIE) behaviour the photophysical properties of the resulting assemblies were investigated via variable-temperature fluorescence spectroscopy [18].

The halogen-bonded assemblies were obtained by mixing the acceptor components NO2-Cn with the donor entities F4St or F4Az in a 1:1 molar ratio in CH2Cl2. The slow evaporation of the solvent and subsequent drying in vacuo yielded the desired assemblies.

The mesomorphic behaviour of the assemblies was investigated by polarised optical microscopy (POM) and differential scanning calorimetry (DSC). It should be noted that the individual building blocks F4St and F4Az as well as NO2-C8 and NO2-C9 do not exhibit mesomorphic behaviour. In contrast, mesophases were observed for components employing NO2-Cn with longer alkyl chains. NO2-C10 showed focal-conic textures at 94 °C during cooling (see Figure 2a) and NO2-C11 showed an enantiotropic smectic behaviour (see Supporting Information File 1, Figures S11 and S15).

In our initial set of assemblies, we combined F4St with NO2-Cn with varying alkoxy-chain lengths (n = 8, 9, 10 and 11). The halogen-bonded assemblies exhibited mesogenic behaviour starting with an alkoxy chain length of n = 8. POM investigations revealed nematic mesophases for all complexes (see also Figure 2b) which is in contrast to the behaviour of pristine NO2-Cn showing a smectic phase for the alkoxy chain lengths of n = 10 or 11. A strong odd–even effect was observed for the NO2-Cn∙∙∙F4St assemblies which indicates a significant impact of the alkyl chain length on the packing of the supramolecular entities in the solid state. This effect was also confirmed by the fluorescence behaviour (see paragraph on photophysical properties) and affects mainly the transition from the nematic to crystalline phase. In addition, it was observed that only assemblies with an odd number of carbon atoms in the alkoxy chain on the halogen bond accepting moiety (NO2-C9 and NO2-C11) displayed an enantiotropic phase behaviour. For the NO2-Cn∙∙∙F4Az assemblies no significant effect of the alkoxy chain length on the transition temperatures was observed. The temperature ranges of the nematic phases are significantly narrower and liquid crystallinity is induced starting with NO2-C9∙∙∙F4Az (see Figure 3). The reduced performance of the azo series compared to the stilbazole series is in line with previous reports and can be attributed to the repulsion of the free electron pairs of the azo group [7]. Interestingly, enantiotropic phase transitions were observed exclusively for NO2-C10∙∙∙F4Az, indicating a different solid-state arrangement of the azo compounds compared to the stilbazole-based assemblies. The mesomorphic properties of all nitro compounds and the assemblies are summarised in Figure 3 and Table 1.

The strength of the halogen bond has a crucial impact on the formation of the liquid crystalline phase as shown, e.g., by Bruce et al. [5,19]. They reported on the thermal properties of halogen-bonded assemblies between stilbazoles and iodo- or bromopentafluorobenzene. While the iodo derivative formed assemblies with liquid crystalline properties, no LC behaviour was observed for the assemblies with bromopentafluorobenzene as it forms a weaker halogen bond. Related systems have been investigated by Yu and co-workers, who studied a series of halogen-bonded liquid crystals based on the combination of azopyridines with molecular iodine or bromine [9]. Interestingly, the broadest mesophase temperature ranges were found for the bromine-based assemblies and not as anticipated, for the iodine system which yields a stronger halogen bond.

In order to prove that the halogen bond plays a crucial role for the induction of liquid crystallinity in our assemblies, we synthesised a series of azo compounds with decreasing fluorination degree at the halogen bond donating iodobenzene [12]. Reducing the number of the fluorine atoms at the halogen bond donating moiety lowers the polarisation of the iodine atom and thus weakens the halogen bond. In a first step, we calculated the interaction energies of the assemblies of the azobenzene halogen bond donors F4St, F4Az, F3Az, F2Az or F2’Az with NO2-C1. For computational efficiency reasons the terminal alkoxy chains were substituted by methoxy groups. The interaction energies were calculated using the latest theoretical counterpoise correction on the mp2/LanL2DZ with the basis set super position error (BSSE). The computed interaction energies for the assemblies (Figure 4, Table S1 in Supporting Information File 1) decrease in the order F4St > F4Az > F3Az > F2Az > F2’Az. This is in accordance with our previous results on pyridine-based assemblies and supports the assumption that a reduction of the fluorination degree at the iodobenzene yields a weaker polarisation of the iodine and thus a weaker halogen bond [12].

To investigate this effect experimentally, a series of azo benzenes with different fluorination patterns was synthesised (F4Az, F3Az, F2Az, F2’Az) and combined with NO2-C10 in CH2Cl2. Upon removal of the solvent the material was investigated with respect to its mesomorphic behaviour using POM and DSC. In a simplified view, the experimental data is in line with the theoretical data and confirms that the formation of thermally stable halogen bonding induces the liquid crystalline properties of the assemblies. We suppose that the formation of the halogen-bonded assembly expands the mesogenic core and yields a more balanced ratio of rigid and flexible segments, which is crucial for the formation of a mesophase [7,20].

The azo compounds with a weakly polarised iodine atom (F2Az or F2’Az) have significantly lower interaction energies and halogen bonding appears not sufficiently strong enough to extend the mesogenic core at elevated temperatures. Thus, no liquid crystalline phase was observed for the NO2-C10∙∙∙F2Az and NO2-C10∙∙∙F2’Az assemblies (see Figure 5). In contrast, the highly fluorinated azo compounds F4Az and F3Az with a stronger polarisation on the iodine atom form sufficiently strong halogen bonds with NO2-C10 to extend the mesogenic core and induce liquid crystallinity (see Figure 6) [12].

It appears surprising, that NO2-C10∙∙∙F3Az shows a broader nematic mesophase range (ΔT = 12.5 °C) than NO2-C10∙∙∙F4Az (ΔT = 4.6 °C). However, the increase in the temperature range is predominantly attributed to the lowering of the crystallisation temperature, which indicates that the strength of the halogen bond is not the only contributor to the mesomorphic behaviour of the halogen-bonded materials. The change in the electronic anisotropy by unsymmetrical substitution with fluorine as present in F3Az will also have an impact on the dispersion interactions and packing in the solid state and adds to the shift of the crystallisation temperature.

Similar to the observation made for the liquid crystalline behaviour, also the fluorescence behaviour shows a strong odd–even effect for the alkoxy chain length at the NO2-Cn unit, which indicates a significant difference in the molecular packing in the solid state. The fluorescence properties noticeably changed from the pristine assemblies directly after removal of the solvent, compared to the materials after one heating/cooling cycle (see Figure 8). In addition, the odd–even effect already described for the liquid crystalline properties also affects the fluorescence behaviour of the supramolecular assemblies in the solid state. Directly after removal of the solvent, all materials were obtained as crystalline powders with weak to moderate fluorescence as observed under UV light by the naked eye (see Figure 8). In contrast, after one heating/cooling cycle the fluorescence of the assemblies based on nitro-cyanostilbenes with an odd number of carbon atoms in the alkoxy chain significantly increased, while for the even-numbered NO2-Cn no significant change in the fluorescence was observed.

The AIE behaviour of cyanostilbenes was first described by Park and co-workers [22]. This readily accessible class of fluorophores can easily be modified and attached to other functional entities, thus it has become a promising candidate for the design of new materials for optoelectronic applications [23]. Recently, it was successfully employed as a fluorescent moiety in the design of luminescent liquid crystals. In supramolecular liquid crystals, however, it did not find application so far [24].

In summary, the first example of a halogen-bonded fluorescent liquid crystal is reported, employing the interaction between iodofluorobenzene derivatives and nitro-cyanostilbenes. A systematic investigation of the materials revealed the impact of the halogen bond donor on the liquid crystalline properties of the assemblies. While the stilbene-based halogen bond donor induces the formation of nematic mesophases with broad temperature ranges, the temperature range of the mesophase of the azobenzene-based assemblies is significant narrower. Theoretical calculations and the modular use of halogen bond donors with changing fluorination degree reveal that at least three fluorine atoms are needed for the formation of a thermally stable halogen bond to induce liquid crystalline properties.

In addition, the formation of the halogen-bonded assemblies had an impact on the fluorescence and photophysical properties of the supramolecular mesogens showing the characteristic AIE behaviour. The length of the terminal alkoxy chain at the nitro-cyanostilbene had a significant impact on the fluorescence behaviour, which was attributed to the packing differences of the assemblies with an even or an odd number of carbon atoms in the alkoxy chain. Currently we are preparing a comprehensive study investigating the potential of halogen bonding in fluorescent liquid crystalline materials.

Supported by an Exploration Grant of the Boehringer Ingelheim Foundation (BIS). M.S. and M.G. are thankful for generous financial support by the Professor-Werdelmann Foundation.

© 2021 Nath et al.; licensee Beilstein-Institut.
This is an Open Access article under the terms of the Creative Commons Attribution License (https://creativecommons.org/licenses/by/4.0). Please note that the reuse, redistribution and reproduction in particular requires that the author(s) and source are credited and that individual graphics may be subject to special legal provisions.
The license is subject to the Beilstein Journal of Organic Chemistry terms and conditions: (https://www.beilstein-journals.org/bjoc/terms) 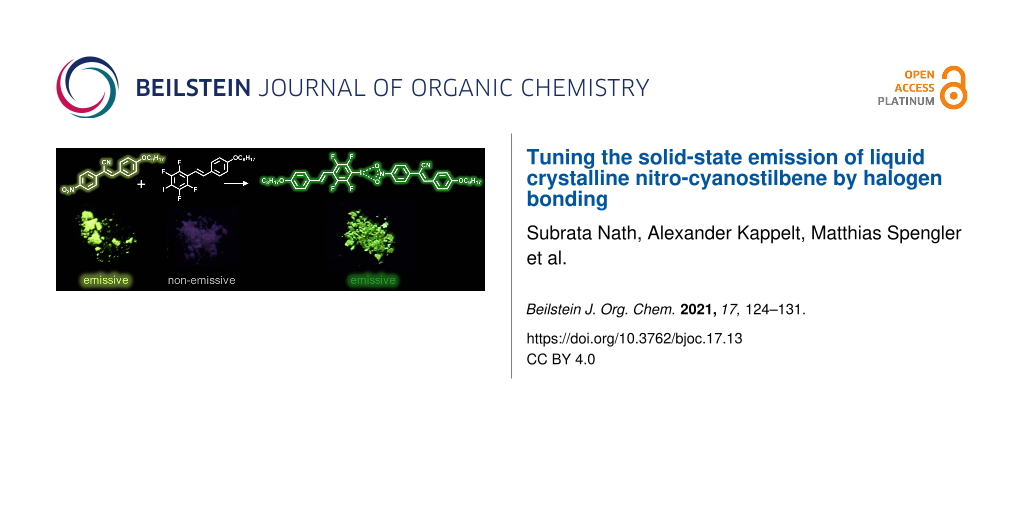