Synthesis and antimicrobial activity of 1H-1,2,3-triazole and carboxylate analogues of metronidazole


All articles from this author
Rene Csuk


All articles from this author
Ahmed Al-Harrasi

Herein, a series of novel 1H-1,2,3-triazole and carboxylate derivatives of metronidazole (5a–i and 7a–e) were synthesized and evaluated for their antimicrobial activity in vitro. All the newly synthesized compounds were characterized by 1H NMR, 13C NMR, HRMS, and 19F NMR (5b, 5c and 5h) spectroscopy wherever applicable. The structures of compounds 3, 5c and 7b were unambiguously confirmed by single crystal X-ray analysis diffraction method. Single crystal X-ray structure analysis supported the formation of the metronidazole derivatives. The antimicrobial (antifungal and antibacterial) activity of the prepared compounds was studied. All compounds (except 2 and 3) showed a potent inhibition rate of fungal growth as compared to control and metronidazole. The synthetic compounds also showed higher bacterial growth inhibiting effects compared to the activity of the parent compound. Amongst the tested compounds 5b, 5c, 5e, 7b and 7e displayed excellent potent antimicrobial activity. The current study has demonstrated the usefulness of the 1H-1,2,3-triazole moiety in the metronidazole skeleton.

Metronidazole (1) is an important antimicrobial agent which has been clinically used successfully for a long time. It was originally used for the treatment of infections caused by Trichomonas varginalis and later it was applied to treat various other infections [1]. For the last 45 years metronidazole (1) is in extensive use for the management of anaerobic infections. The compound possesses a broad spectrum of activity against various Gram-positive as well as Gram-negative organisms [2]. It is also a cost-effective drug. Due to its impressive antimicrobial activity and limited adverse effect metronidazole (1) has been considered as a “Gold Standard” antibiotic (Figure 1).

However, to avoid the problem related to clinical resistance to this antimicrobial agent some novel and improved analogues of this compounds are required. In this regard we suggested the modification of the alcohol tail of metronidazole by incorporating an N-heterocyclic moiety.

Nitrogen-containing heterocycles play a vital role in agrochemicals and pharmaceuticals [3]. Among these heterocyclic systems, the 1H-1,2,3-triazoles are very important in organic chemistry due to their broad spectrum of applications in biochemical, biomedicinal, pharmaceuticals, and materials sciences [4]. Their chemistry underwent a substantial growth over the past decades [5]. They are widely used in industrial applications such as photographic materials, dyes, agrochemicals, photostabilizers, and corrosion inhibitors (copper alloys) [6]. Incorporation of the 1H-1,2,3-triazole moiety is well known to impact on the physical, chemical and biological potential properties of organic molecules. Due to this reason, many efforts have been exerted to develop new synthetic methodologies toward the 1H-1,2,3-triazole group containing organic entities.

The 1H NMR spectrum of metronidazide 3 showed a singlet at δ 7.93 for the 1H-imidazole proton. Two triplet signals at δ 4.40 and δ 3.74 were assigned to four methylene protons of –N–CH2-CH2–N3. A singlet peak at δ 2.50 was due to methyl protons on the imidazole ring. The high-resolution mass spectrometric data at 197.0737 (M + H)+ confirmed the structure of metronidazide 3.

Single crystals of metroazide compound 3 were grown from slow evaporation of DCM solution. The structure of metronidazide 3 was unambiguously confirmed by single crystal X-ray analysis (Figure 3).

The next step was carried out by using “click” chemistry involving the 1,3-dipolar cycloaddition reaction between metronidazide 3 and alkyne derivative 4a in the presence of CuI and Hünig’s base with MeCN as a solvent. The reaction furnished the desired product metronidazole 1H-1,2,3-triazole derivative 5a as a pale yellow solid in 85% yield [19,20].

Synthesis of carboxylate analogues of metronidazole

Compound 1 reacted with different acid chlorides (6a–e) in the presence of pyridine, a catalytic amount of DMAP and in dry DCM at room temperature. The reaction proceeded smoothly to give the desired metronidazole carboxylate derivatives 7a–e in 86–93% yields [21,22]. The synthesis of the new metronidazole carboxylate derivatives is summarized in Scheme 2 and Table 2.

The 1H NMR spectrum of compound 7b showed two doublet signals at δ 8.26 and 8.07 which are due to the four aromatic protons of the phenyl ring. A singlet signal at δ 7.95 is for the 1H-imidazole proton. Two doublet signals at δ 4.73 and δ 4.71 are assigned to the four methylene protons of –N–CH2-CH2–Ph. A singlet peak at δ 2.48 is due to the methyl protons on the imidazole ring. The high-resolution mass spectrometric data at 321.0842 (M + H)+ supported the structure of compound 7b.

In this article, chemical transformations of novel metronidazole 1H-1,2,3-triazole derivatives via “click” chemistry and carboxylate derivatives can lead to a wide range of biological applications.

The general structural pattern of the synthesized metronidazole derivatives is shown in Figure 6. Two pharmacophoric elements (metronidazole core and triazole moiety) were considered as rigid motif with an alkyl/aryl group attached to the triazole unit. A diverse array of functional groups in the aromatic ring influencing the antimicrobial activity of the molecules have been utilized.

The antifungal activity of all compounds were evaluated by inhibiting the growth of Didymella sp. (Figure 7 and Table 3). The fungal colony after 7 days of control treatment was noted to be 8.6 cm in diameter.

Whereas, the growth of the fungal colony was detected maximum, i.e., 8.8 ± 0.2 and 9.0 ± 0.3 cm against compound 2 and 3, respectively. However, compound 5e and 7c efficiently inhibited the fungal growth by limiting the colony diameter to 3 ± 0.3 and 3.1 ± 0.2 cm followed equally by compound 7b and compound 5b with 4.1 ± 0.3 and 4.6 ± 0.2 cm, respectively. Compared to control and metronidazole treatments, fungal growth under compound 5e and compound 7c treatment was detected 2.8, 2.7 folds and 2.5, 2.6 folds less, respectively. All of the synthesized compounds except compounds 2 and 3 showed a higher inhibition rate of fungal growth as compared to the control and metronidazole (Figure 7 and Table 3). The inhibition zones were recorded after 7 days of treatment and compared with growth area of fungi growing in control conditions.

In summary, a series of novel metronidazole 1H-1,2,3-triazole and carboxylate derivatives (5a–i and 7a–e) were synthesized via “click” chemistry, and evaluated for their antimicrobial activity (antifungal and antibacterial) in vitro. All the synthesized compounds (except 2 and 3 for antifungal studies) showed higher inhibition rates of fungal and bacterial growths when compared to control and the parent compound, metronidazole. Amongst the tested compounds 5b, 5c, 5e, 7b and 7e displayed excellent potent antimicrobial activity. The present study has added one more step in exploring the 1H-1,2,3-triazole moiety in the medicinal field. In addition, the above-mentioned activity of all the active compounds was reported for the first time for these derivatives.

We special thanks to Dr. Abdul Latif Khan and Dr. Saqib Bilal for their support of this project. We thank the technical and analytical staff for assistance.

The authors would like to thank the University of Nizwa for the generous support of this 1H-1,2,3-triazole synthesis project.

All authors confirm that this article content has no conflict of interest.

Pigmentosins from Gibellula sp. as antibiofilm agents and a new glycosylated asperfuran from Cordyceps javanica

© 2021 Avula et al.; licensee Beilstein-Institut.
This is an Open Access article under the terms of the Creative Commons Attribution License (https://creativecommons.org/licenses/by/4.0). Please note that the reuse, redistribution and reproduction in particular requires that the author(s) and source are credited and that individual graphics may be subject to special legal provisions.
The license is subject to the Beilstein Journal of Organic Chemistry terms and conditions: (https://www.beilstein-journals.org/bjoc/terms) 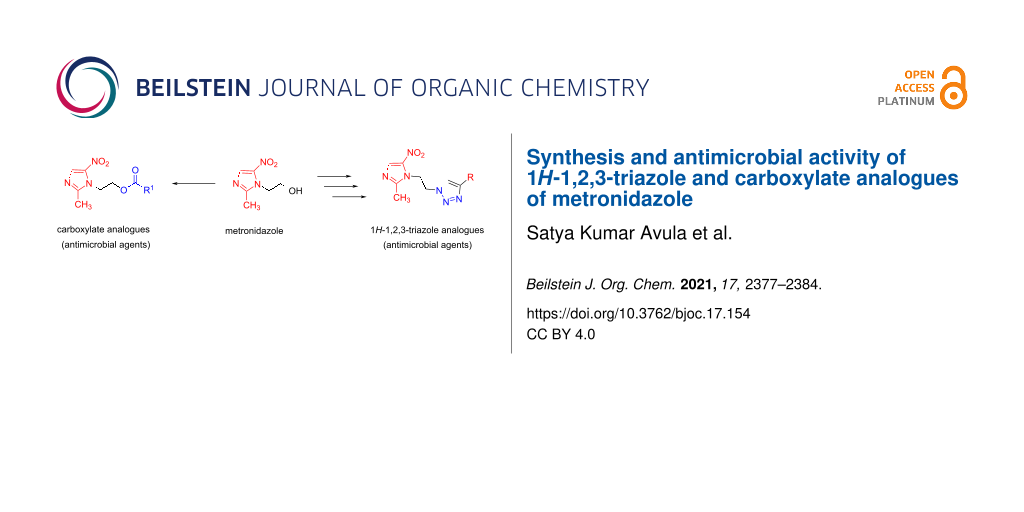