All articles from this author
Lakshmi N. S. Konidena


All articles from this author
Hima B. Gandham


All articles from this author
Krishnaiah Kumari


All articles from this author
Krishna R. Valluru


All articles from this author
Satya K. R. Nidasanametla


All articles from this author
Hari K. Namballa

A simple and efficient protocol for the construction of 1-aminoisoquinolines was achieved by treating 2-(2-oxo-2-phenylethyl)benzonitriles with amines in the presence of Me3Al. The reaction proceeds via a domino nucleophilic addition with subsequent intramolecular cyclisation. This method provides a wide variety of substituted 1-aminoisoquinolines with good functional group tolerance. Furthermore, the synthetic utility of this protocol was demonstrated in the successful synthesis of the antitumor agent CWJ-a-5 in gram scale.

Heterocyclic compounds have always been recognized as the frameworks of interest in organic and medicinal fields. Particularly, aza-heteroarenes have attracted burgeoning interest in the research community owing to their structural and biological significance [1-4]. The isoquinoline template represents a huge family of aza-heterocycles with unparalleled structural diversity, and is considered to be associated with a huge range of applications in medicinal and materials sciences [5-12]. 1-Amino substituted isoquinoline derivatives are extensively studied owing to their therapeutic applications in medicinal chemistry such as antimalarial, anti-Parkinson and antitumor activity (Figure 1) [13-17]. They also display remarkable enzymatic inhibitory activities on topoisomerase I, [18] mutant B-Raf [19] and exhibit antagonistic activities towards adenosine A3 [20] and PDE4B [21] receptors. They are useful in the synthesis of phosphorescent materials [22-24], fluorosensors [25]. and also found as chiral ligands in a variety of transition metal catalysts [26-30].

Given the pharmacological promiscuity of this scaffold, extensive efforts from different groups led to the development of several approaches for the efficient construction of these heterocyclic frameworks (Scheme 1). Traditional preparations for 1-aminoisoquinolines include nucleophilic substitution of 1-haloisoquinolines with amines either employing a base [31-35] or a transition metal catalyst [36-40]. However, pre-functionalization of isoquinolines to the corresponding halogenated isoquinolines is the main limitation associated with these protocols as they require noxious halogenated acids for their starting materials preparation. Alternative strategies include, amination of isoquinoline N-oxides [41,42], condensation of lithiated o‐tolualdehyde tert‐butylimines with nitriles [43], electrophilic cyclization of 2-alkynylbenzamides [44,45] or 2-alkynylbenzaldoximes [46-54], oxidative C–H functionalizations (coupling) on aryl and heteroaryl amidines with alkynes catalyzed by either rhodium or ruthenium [55-57], or a metal-catalyzed aminative cyclization of 2-alkynylbenzonitriles with secondary amines [58]. Despite the advantages associated with the aforementioned protocols such as the functional group tolerance and huge substrate scope, they are associated with few limitations including: utilization of metals, transition metals, and difficulties in accessing the starting materials, which provoke the attention of the synthetic community for the development of simple and efficient methodologies towards the construction of these heterocyclic frameworks.

On the other hand, organonitrile, the polar unsaturated carbon−nitrogen multiple bond, recognized as one of the most versatile chemotypes in both the laboratory and industry because of their vital role displayed in various transformations [1-4]. They capture a major area in the synthesis of a wide array of heterocyclic compounds by creating C–C, C–N, C–O and C–S bonds due to their ability to act as electrophiles. The cyano group is considered as a versatile functional group in various organic syntheses because of its participation in various electrophilic, necleophilic and bipolar cycloaddition reactions and also serves as a precursor for the generation of important functional groups like amines, aldehydes, ketones and carboxylic acids. Even though the nitrile functional group is prevalent in the transformation into different functional groups, the synthetic approaches that incorporate the nitrogen atom of the cyano group into heterocyclic products is still challenging for the synthetic community. In an effort to develop a synthetic strategy for 1-aminoisoquinolines with increased selectivity and step economy by minimizing the generation of byproducts, we hypothesized that if suitably tailored benzonitriles 3 were cyclized in an intramolecular fashion by installing nuclophilic nitrogen onto the nitrile functionality would generate 1-aminoisoquinolines. Herein we describe our efforts on a Me3Al-mediated nucleophilic addition followed by an intramolecular cyclisation of 2-(2-oxo-2-phenylethyl)benzonitriles with amines to deliver 1-aminoisoquinolines and its successful application in the synthesis of antitumor agent CWJ-a-5.

With the optimal reaction conditions in hand, we next explored the substrate scope of this protocol. Initially, 2-(2-oxo-2-phenylethyl)benzonitrile (3a) was treated with various anilines under the optimized reaction conditions (Scheme 2). The yields of the reactions were not influenced significantly by the electronic effects of the substituents. However, the steric effects of the substituents have influenced the yields of the reaction substantially. Comparably better yields were observed with electron donating substituents than the electron withdrawing halo groups on the aniline ring (Scheme 2, 5b–m). Importantly, the steric effects on the aniline ring have huge impact on the reaction efficiency and efficacy, where para- and meta-substituents have minimal impact on the yields of the reaction delivering the corresponding products in comparable yields (Scheme 2). While least yields were observed with ortho-substituted anilines (Scheme 2, 5h and 5k), which can be rationalized by the steric hindrance created by the ortho-substituents. It is also worth mentioning that secondary anilines also reacted with 2-(2-oxo-2-phenylethyl)benzonitrile (3a) and delivered the corresponding product 5m, albeit in lesser yields.

Interestingly, different alkylamines such as methylamine, ethylamine and piperazines were also found to be compatible with the present protocol delivering the corresponding 1-aminoisoquinolines (5v–x) in good yields (Scheme 4). The synthetic utility of this method was further extended towards the gram-scale synthesis of the antitumor agent CWJ-a-5. Accordingly, 2-(2-oxo-2-phenylethyl)benzonitrile (3a) was treated with 1-methylpiperazine (6) under the optimized reaction conditions for 8 h, which delivered antitumor agent CWJ-a-5 (1) in 81% yield (Scheme 4).

The mechanism for the formation of 1-aminoisoquinolines was depicted in Scheme 5. Initially, 2-(2-oxo-2-phenylethyl)benzonitrile (3) condenses with amine/aniline in the presence of Me3Al to afford imine intermediate A. Intermediate A then underdoes an intramolecular cyclisation to afford intermediate B. This intermediate B then undergoes an N-[1,3]-shift leading to the generation of intermediate C, which subsequently abstracts a proton to yield the product 5.

In summary, an efficient Me3Al-mediated domino nucleophilic addition with a subsequent intramolecular cyclisation on 2-(2-oxo-2-phenylethyl)benzonitriles with amines was developed allowing access to widely substituted 1-aminoisoquinolines. Furthermore, the synthetic utility of this protocol was demonstrated in the successful synthesis of the antitumor agent CWJ-a-5 in gram scale. Good to higher yields and a wide substrate scope are the key advantages associated with the current protocol. Further biological investigations of the synthesized compounds are currently underway.

© 2021 Adusumalli et al.; licensee Beilstein-Institut.
This is an Open Access article under the terms of the Creative Commons Attribution License (https://creativecommons.org/licenses/by/4.0). Please note that the reuse, redistribution and reproduction in particular requires that the author(s) and source are credited and that individual graphics may be subject to special legal provisions.
The license is subject to the Beilstein Journal of Organic Chemistry terms and conditions: (https://www.beilstein-journals.org/bjoc/terms) 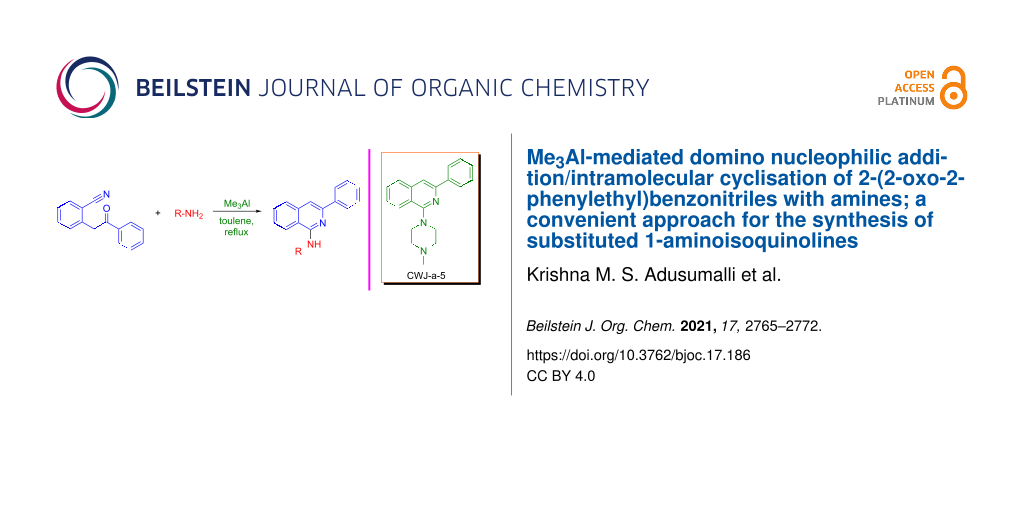