The fluorescence of a mercury probe based on osthol


All articles from this author
Zhishu Zeng


All articles from this author
Lin Zhang

The ability of osthol (OST) to recognize mercury ions in aqueous solution was studied using fluorescence, UV–vis spectrophotometry, mass spectrometry, and 1H NMR spectroscopy, and the recognition mechanism is discussed. The results showed that OST and Hg2+ can form a complex with a stoichiometric ratio of 1:1. The binding constant was 1.552 × 105 L∙mol−1, having a highly efficient and specific selectivity for Hg2+. The fluorescence intensity of OST showed a good linear correlation with the Hg2+ concentration (6.0 × 10−5 to 24.0 × 10−5 mol∙L−1, R2 = 0.9954), and the detection limit of the probe was 5.04 × 10−8 mol∙L−1, which can be used for the determination of Hg2+ traces.

Mercury is a dangerous heavy-metal pollutant. Inorganic mercury (Hg2+) can be transformed into methyl mercury (MeHg+) by sulfate-reducing bacteria [1-3]. MeHg+ can accumulate in organisms through the food chain, resulting in serious and irreversible nerve damage. Therefore, it is very important to develop a highly sensitive and selective method for mercury detection. At present, the detection of mercury mainly includes atomic absorption and atomic emission spectrometry [4], inductively coupled plasma mass spectrometry [5,6], and capillary electrophoresis [7]. However, the application of these analytical methods in mercury detection is limited due to the complex sample pretreatment procedures, expensive instruments, and other factors [8,9]. Fluorescent-probe instruments have been widely used due to the advantages of the simple operation, low cost, and high sensitivity [10-12]. In recent years, many fluorescent molecular probes have been reported. Because Hg2+ has a very strong quenching effect on fluorescence, most of the fluorescent molecular Hg2+ probes are of the fluorescence-quenching type and are easily interfered with by other quenching processes [13-17]. Fluorescence-enhanced probes have received wide attention because of their enhanced fluorescence signal, which can better exclude the influence of instrument noise and other factors, reduce measurement errors, and thus have a higher sensitivity. Osthol (OST) is a coumarin compound extracted from the fruit of Cnidium monnieri (L.) cuss [18,19]. Modern pharmacological studies have shown that OST has antihypertension, anti-epilepsy [20], anti-arrhythmia, anti-fatty-liver-disease, antitumor [21], antiosteoporosis, and other effects [22]. As a new type of fluorescence probe [23], OST as a probe for the detection of mercury has not been reported. In this paper, OST was used as a fluorescent probe since the fluorescence intensity of OST at 406 nm increased significantly when Hg2+ was added. The probe had a high selectivity and sensitivity for Hg2+ recognition and can be used for the quantitative detection and monitoring of mercury ions in the environment.

Selectivity of the fluorescent OST probe to metal ions

The specificity of a probe for metal ions is the key factor to evaluate the performance of fluorescent probes. As shown in Figure 1A, the selectivity of OST to common metal ions is monitored by the fluorescence spectrum (λex = 325 nm). OST exhibits a weak fluorescence intensity at λex = 406 nm. When adding different metal ions (Hg2+, Ca2+, Na+, Mg2+, Al3+, Cd2+, Cu2+, Pb2+, Ni2+, Co2+, Fe3+, Ag+, Cr3+, and other metal ions) in 10 times the equivalent concentration to the OST probe, only Hg2+ produced an obvious fluorescence enhancement (the intensity increased sharply by about 27 times), and the other metal ions had little effect on the fluorescence intensity of OST, which indicates that the probe had a high selectivity for Hg2+. At the same time, under irradiation with 365 nm ultraviolet light, it was found that the OST solution was colorless and transparent when metal ions other than mercury were added. Only after Hg2+ was added, it showed a bright blue fluorescence (Figure 1B). These obvious changes in the color and fluorescence intensity indicated that OST had a good Hg2+ recognition effect and achieved the visual detection of Hg2+.

Influence of coexisting ions on the detection of Hg2+

To investigate the interference ability of coexisting ions with the determination of Hg2+, a coexisting ion experiment was carried out (Figure 2) [24]. The fluorescence intensity was measured by adding 1.2 × 10−4 mol∙L−1 of various metal ions to the OST–Hg2+ (c = 3.0 × 10−5 mol∙L−1) probe system. It is found that Fe3+ had a certain fluorescence quenching effect on the system due to the paramagnetism [25], but the fluorescence quenching effect was not enough to affect the recognition of mercury ions by the probe, and the presence of other coexisting metal ions did not affect the fluorescence spectrum change of the OST–Hg2+ system.

Impact of the pH value of the solution

Effect of the solvent

The binding ratio of the OST–Hg2+ complex

The stoichiometric ratio between OST and Hg2+ was determined using the Job method (constant mole variation), and the results are shown in Figure S3, Supporting Information File 1. The maximum UV absorption intensity was achieved at n(Hg2+)/n((OST) + (Hg2+)) = 0.5 at 325 nm, indicating that the binding ratio of the OST probe to Hg2+ was 1:1. Combined with mass spectrometry data (Figure 5), the fragment peak of ESIMS at m/z 892.5422 corresponded to [OST2–Hg2]+ (calculated as 892.5429), indicating that OST and Hg2+ formed a 2:2 complex.

The chemical shift of the resonance peak between the OST probe and Hg2+ in a 1H NMR titration experiment was used to infer the binding mode of the probe and Hg2+. Figure 6 shows a 1H NMR titration of OST in the presence of Hg2+ at different concentrations. With the addition of Hg2+, the OST proton resonances shift. At n(Hg2+)/n(OST) = 1, the chemical shift of the proton signals did not change, indicating that the interaction ratio of OST and Hg2+ was 1:1. At this time, the signals of the protons Ha, Hb, Hc, Hd, and He shifted downfield by 0.02, 0.03, 0.06, 0.04, and 0.04 ppm, respectively. This was due to the formation of the OST–Hg2+ complex, and the oxygen atoms on the aromatic ring were complexed by Hg2+, and thus enhancing the electron absorption effect on the aromatic ring, reducing the electron cloud density, leading to the proton signal of the aromatic ring moving to a lower field. The signals of the protons Hf, Hh, and Hi were shifted to a higher field by 0.02, 0.35, and 0.18 ppm, respectively. The formation of the OST–Hg2+ complex decreased the distance between the two aromatic rings so that the protons Hf, Hh, and Hi on the branched chain were in the shielding region of the benzene ring and their signals shifted to a higher field. When the protons Hh and Hi of the two methyl groups were in the shielding region of the aromatic ring, the chemical shifts moved to a higher field. Because Hh is located in the central area of the shield and Hi is at the edge of the shield, the Δδ value of Hh is relatively large, and finally both moved to δ 1.35.

Based on the 1H NMR and mass spectrometry data, combined with the analysis of the UV–vis spectrum, the interaction mode between OST and Hg2+ is suggested as shown in Figure 7. Hg2+ and the oxygen atoms of the lactone ring and the methoxy group formed a stable complex, resulting in the enhanced fluorescence.

Measurement of the fluorescence quantum yield

Determination of Hg2+ in a water sample

Tap water was directly used for the determination of Hg2+ using the standard addition method, and the recovery rate of the sample was determined. The results are listed in Table 1.

As shown in Table 1, the probe can not only identify Hg2+ but also effectively detect Hg2+ in tap water, which further proves that the applicational value of the probe is considerable.

In this paper, OST was used as the fluorescent probe to establish a new method for the determination of Hg2+. Within the range of 6.0 × 10−5 to 24.0 × 10−5 mol∙L−1, the change in the fluorescence intensity of the system had a good linear relationship with the concentration of mercury ions. The linear equation was y = 664.91 ∙ x − 94.92, the detection limit was 5.04 × 10−8 mol∙L−1, and the recognition process was the result of a chelation fluorescence enhancement mechanism. The method is simple to be executed, has a high sensitivity and good selectivity, and can be used to quantitatively detect and monitor mercury ions in the environment.

© 2021 Luo et al.; licensee Beilstein-Institut.
This is an Open Access article under the terms of the Creative Commons Attribution License (https://creativecommons.org/licenses/by/4.0). Please note that the reuse, redistribution and reproduction in particular requires that the author(s) and source are credited and that individual graphics may be subject to special legal provisions.
The license is subject to the Beilstein Journal of Organic Chemistry terms and conditions: (https://www.beilstein-journals.org/bjoc/terms) 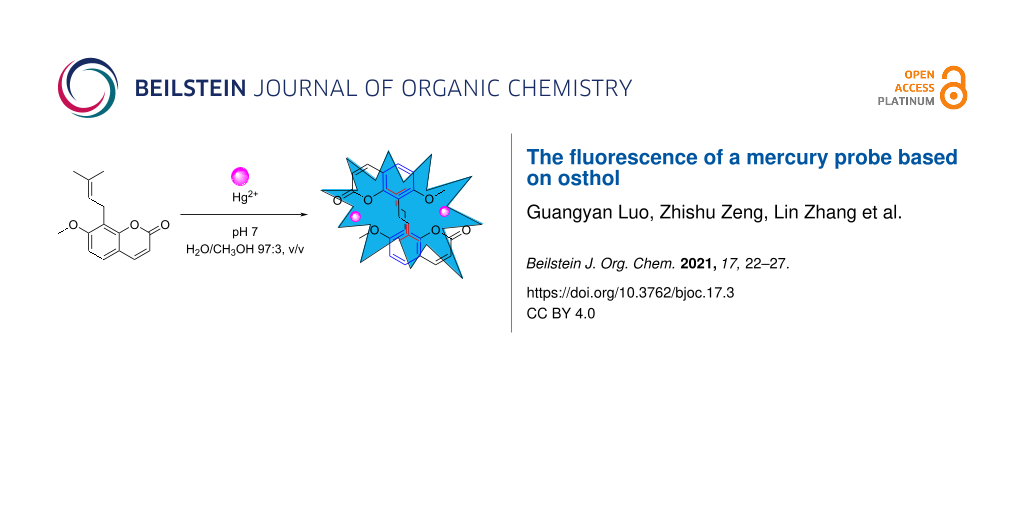