Pyrroles are known to be important structural moieties appearing in natural products, synthetic drugs, agrochemicals, and functional materials (polymers, dyes, films, etc.) (Figure 1) [1-4]. Numerous methods exist for pyrrole synthesis, including the classical and industrially important condensation approaches, such as the Hantzsch, Huisgen, and Paal–Knorr processes [5]. However, the direct modification of pyrroles to the 3,4-disubstituted derivatives is challenging because an electrophilic aromatic substitution of pyrroles or the metalation of N-substituted pyrroles and the subsequent reaction with electrophiles take place in position two of the ring [6,7].

Recently, N-sulfonyl-1,2,3-triazoles, conveniently prepared by [3 + 2] cycloadditions of terminal alkynes with sulfonyl azides, have been used as the precursors to N-sulfonylindoles by transition-metal-catalyzed transannulation reactions. In the presence of Rh(II) or Ni(0) catalysts the triazole ring-opening takes place and intermediate highly electrophilic metal-bound iminocarbenes form. These iminocarbenes undergo a variety of intriguing reactions, such as a cycloaddition and a C–H functionalization, among others, leading mostly to nitrogen heterocycles [8-10]. Using this chemistry, a variety of pyrroles have been prepared starting from N-sulfonyl-1,2,3-triazoles (Scheme 1) [11-17].

The use of fluorine atoms and fluoro groups (including the trifluoromethyl group) is a widely used strategy to improve the properties of drug candidates or agrochemicals [23-28]. The development of new methods for the synthesis of selectively fluorinated and trifluorometylated compounds is essential for future progress in areas that eventually improve the quality of life. In this context, N-trifluoromethylated compounds (amines, amides and nitrogen heterocycles) are a relatively underexplored group of molecules with a high potential in medicinal chemistry [29,30]. Taking inspiration from the work of Gevorgyan (Scheme 1h) [11], we report herein our recent results on the rhodium-catalyzed transannulation of N-perfluoroalkyl-1,2,3-triazoles with terminal alkynes leading to unusually substituted N-perfluoroalkylpyrroles.

The published transannulation of N-tosyl-1,2,3-triazoles with terminal alkynes requires the use of a Rh/Ag binary catalyst system, works only with electron-rich arylacetylenes and leads to N-tosyl-2,4-disubstituted pyrroles (Scheme 1h) [11]. The application of these conditions to N-trifluoromethyltriazole 1a and phenylacetylene leads to a mixture of 3,4-diphenylpyrrole 2a and 2,4-diphenylpyrrole 2a’. However, repeating the experiment without the silver catalyst afforded the same results showing that the silver catalyst was not necessary in our case and that the product regioselectivity was not dependent on the silver catalyst (Table 1, entry 1). Chloroform was found to be the most suitable solvent and varying rhodium catalysts led to the 2a + 2a’ product mixture of various ratios. Rh2(oct)4 and Rh2(esp)2 gave the highest 2a/2a’ ratio, while the electron-deficient Rh2(pfb)4 catalyst gave the lowest 2a/2a’ ratio and an incomplete conversion. Reducing the reaction temperature to 80 °C afforded a full conversion of the starting triazole, but no reaction took place at 60 °C. The optimized conditions are presented in Table 1, entry 8; however, for the following reaction scope study, a temperature of 100 °C and 20 min reaction time were used to ensure a full conversion for all studied substrates.

Next, the transannulation reaction was tested using a range of different substituted N-trifluoromethyl- and N-pentafluoroethyl-4-aryl-1,2,3-triazoles 1 with phenylacetylene (Scheme 2). Good to moderate yields of product mixtures 2 and 2’ were obtained and the 2/2’ ratio ranged from 59:41 to 79:21.

While aliphatic alkynes were found to be ineffective in transannulations with N-tosyl-1,2,3-triazoles, the reactions of N-perfluoroalkyl-1,2,3-triazoles with aliphatic alkynes proceeded well and the pyrroles 3 were formed in unexpectedly high selectivities, ranging from 87:13 to 98:2 (Scheme 3). The isolated product yields were moderate to good and the products were generally obtained as mixtures of regioisomers. Column chromatography allowed the separation of pure isomers of 2a, 2a’, 3a, 3b, 3d, 3h, 3l, 3m, and 3n. However, no general trend in the efficiency of the reaction or product selectivity was observed.

Hex-5-ynenitrile was used in the transannulation with 1a with the aim to assess the relative propensity of nitrile and alkyne groups in the reaction. The triple bond reacted in the transannulation about two times faster than the nitrile group and again the 3,4-disubstituted pyrrole 4 regioisomer dominated over the 2,4-disubstitued pyrrole 4’ (Scheme 4).

To demonstrate the compatibility of the formed N-perfluoroalkylpyrroles with the conditions of pyrrole derivatization by metalation in position two and reaction with an electrophile, the crude product 2a was treated with butyllithium, followed by the reaction with carbon dioxide to afford pyrrole carboxylic acid 6 in a good overall yield (Scheme 5). The trifluoromethyl group on the nitrogen was not affected by these highly basic reaction conditions.

The mechanism of the rhodium-catalyzed transannulation to pyrroles has recently been investigated computationally with N-sulfonyltriazoles [31]. It seems that the formed rhodium carbenoid B reacts with the alkyne in a concerted process and even in the presence of Ag+ salts, a nucleophilic addition of silver acetylides does not take place. In our case, the transition states TS1 and TS2 have roughly similar energies for phenylacetylene and TS1 is lower in energy for aliphatic alkynes (Scheme 6).

This work was financially supported by the Czech Academy of Sciences (Research Plan RVO: 61388963) and by the Ministry of Education, Youth and Sports in the program INTER-EXCELLENCE (LTAUSA18037).

© 2021 Bakhanovich et al.; licensee Beilstein-Institut.
This is an Open Access article under the terms of the Creative Commons Attribution License (https://creativecommons.org/licenses/by/4.0). Please note that the reuse, redistribution and reproduction in particular requires that the author(s) and source are credited and that individual graphics may be subject to special legal provisions.
The license is subject to the Beilstein Journal of Organic Chemistry terms and conditions: (https://www.beilstein-journals.org/bjoc/terms) 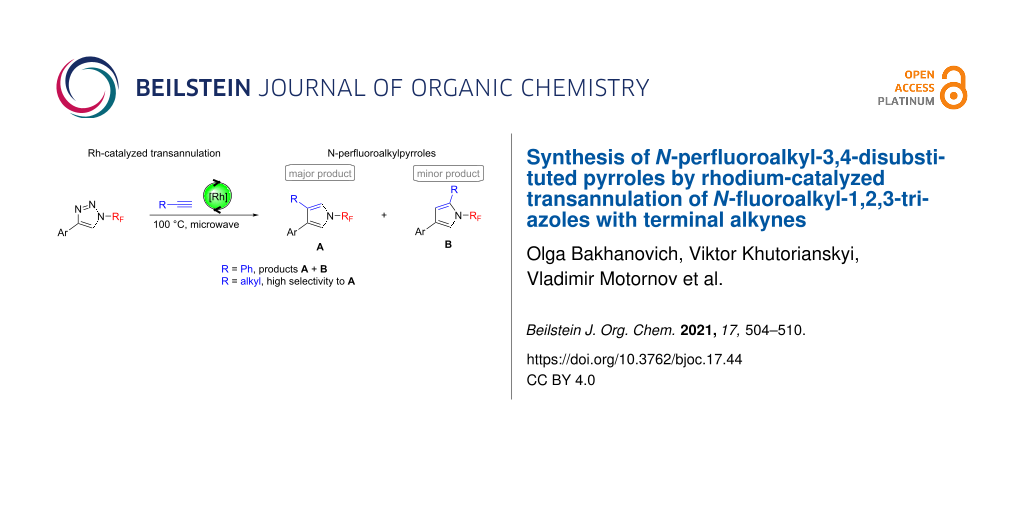