Desulfonylative alkylation of N-tosyl-1,2,3-triazoles under metal-free conditions leading to β-triazolylenones is reported here. The present study encompasses the synthesis of triazoles with a new substitution pattern in a single step from cyclic 1,3-dicarbonyl compounds and N-tosyl triazole in moderate to high yields. Our synthesis takes place with complete regioselectivity as confirmed by crystallographic analysis which is rationalized by a suitable mechanistic proposal. This method provides an efficient, versatile and straightforward strategy towards the synthesis of new functionalized 1,2,3-triazoles.

1,2,3-Triazoles are significant non-natural heterocyclic scaffolds with extensive applications in biochemistry, agrochemistry and materials chemistry [1-5]. This class of heterocycles presents important biological properties, such as antiviral, anti-inflammatory, antimicrobial etc. and are considered as key building blocks in pharmaceutical industry [6-9]. Thus, they marked their presence as prominent scaffolds in many drug molecules such as tazobactam, cefatrizine, rufinamide and JNJ-54175446 (Scheme 1a) [10].

In addition to their biological activities, triazolic compounds are widely employed in organic synthesis and have outstanding synthetic versatility. In this sense, extensive scientific research has been conducted using triazoles as synthetic precursors in denitrogenative transannulation reactions under metal-catalysed conditions to form other heterocycles such as functionalized pyrroles, imidazoles and pyridines (Scheme 1b) [11-13].

The traditional method for the synthesis of triazole unit is the Huisgen 1,3-dipolar cycloaddition between azides and alkynes [14,15]. However, the formation of the nitrogenated azoles by the classical Huisgen methodology is slow due to its high activation energies and also lack of regiochemical control, in general, leading to a mixture of 1,4- and 1,5-regioisomers of 1,2,3-triazoles. Later, Sharpless and Meldal have independently developed a copper-catalysed azide–alkyne cycloaddition that accelerated the rate of the reaction and allowed the selective preparation of 1,5-disubstituted 1,2,3-triazoles [16-19].

As noted above, a wide range of methods are available in the literature for the efficient synthesis of triazoles with different substitution pattern. One important methodology developed by the Sakai group involved the reaction of α,α-dichloroketone, tosyl hydrazide and primary amine [20]. However, in this case, the unstable α,α-dichlorohydrazone intermediate had to be isolated which paved the way for further modification of the protocol (Scheme 1c).

Direct functionalization of triazoles is an alternative strategy to access triazoles with the desired substitution pattern. However, such approaches are complicated by a low energy barrier between the N1 and N2 tautomers in solution leading to poor N1/N2 selectivity, for instance, in the direct N-alkylation of triazoles [21-23]. Despite these challenges, a number of N1- and N2-selective alkylation methods have been developed employing transition metal catalysts which include Au-catalysed desulfonylative coupling N-tosyl-1,2,3-triazoles with alkynes and Rh catalysed N1 and N2 selective alkylations [24,25].

As for metal-free approaches, besides synthesizing N-alkylated triazoles via 1,3-dipolar cycloaddition of alkyl azide with enols generated from carbonyl compounds under transition metal-free conditions [26], a direct functionalization of triazoles under metal-free conditions has been reported. These include the Broensted acid-catalysed N2 alkylation [27], organocatalytic N1 alkylation [28,29], N2-arylation using hypervalent iodine (Scheme 1c) [30], N2-alkylation involving radical intermediate [31], pyridine-N-oxide-mediated N1-arylation [32], NIS-mediated N2-arylation [33], etc. Although these are significant advances towards metal-free functionalization of triazoles, many of them suffer from poor regioselectivity. Therefore, a new method for N1-selective alkylation of the triazole moiety under simple, mild and metal-free conditions is highly desirable.

From another perspective, compounds containing a 1,3-dicarbonyl moiety are essential building blocks in organic synthesis whose reactivity is well-established in the literature [34,35]. Besides, these are the precursors of β-enamines which are employed for the synthesis of many bioactive heterocycles [36]. These are also important precursors of diazo adducts which are used in insertion, cyclopropanation, and various rearrangements to construct various cyclic as well as acyclic moieties under metal-catalysed conditions [37,38]. On the contrary, under basic conditions, these diazo compounds undergo [3 + 2] cycloadditions with suitable substrates to render various nitrogen-rich heterocycles [39]. In addition to their synthetic importance, these are frequently encountered as ligands in many metal complexes [40-43]. Our group have also employed 1,3-dicarbonyl compounds as binucleophiles for the construction of various carbocycles, heterocycles as well as in asymmetric catalysis [44-50]. Our initial objective to trap the aza vinyl rhodium carbenoid using 1,3-dicarbonyl compounds to form pyrazolone was unsuccessful which instead led to the formation of an unexpected product, i.e., β-triazolylenone. Being inspired by the results, we intended to use 1,3-dicarbonyl compounds as detosylative alkylating agents that would lead to the formation of β-triazolylenones in a highly regioselective manner under mild conditions (Scheme 1d).

In order to execute our idea, triazole 1a and 1,3-cyclohexanedione (2a) were selected as our model substrates and the reaction was performed using 4 mol % of Rh2(OAc)4 in chloroform under reflux conditions which afforded the β-1,2,3-triazolylcyclohexenone 3a in 66% yield (Table 1, entry 1). The alternative approach for the synthesis of such triazole moiety 3a is the [3 + 2] cycloaddition between alkynes and the corresponding azides. However, the major disadvantage of such a strategy is the use of 3-azidoenone which is difficult to handle owing to its explosive nature. Therefore, our method provides an easy pathway to synthesize such triazolylenones.

At the outset, various triazoles 1 were screened under the optimized conditions (Scheme 2). As mentioned earlier, the model triazole 1a afforded the product 3a in 78% yield within 24 h. But to our surprise, triazoles 1b and 1c containing electron donating 4-tolyl and 4-methoxyphenyl groups did not deliver the products 3b and 3c, respectively, even after prolonged reaction time. This is attributable to the greater reactivity of their corresponding triazolyl anion which preferred protonation over Michael addition (see mechanism, Scheme 4, vide infra). On the other hand, 4-tert-butyl analog 1d underwent the reaction smoothly to form the corresponding product 3d in 70% yield. However, due to the inconsistent results with cyclohexanedione 2a, further scope was investigated by employing cyclopentane-1,3-dione 2b. The model triazole 1a furnished the product 3e in 55% yield within 18 h. To our delight, triazoles 1b and 1c, bearing 4-tolyl and 4-methoxyphenyl groups, which did not react with 1,3-cyclohexanedione 2a reacted smoothly with cyclopentane-1,3-dione 2b to deliver the products 3f and 3g in 71% and 61% yields, respectively. The reaction of mild electron withdrawing 3-methoxyphenyl-1,2,3-triazole 1e led to product 3h in low yield (38%) whereas the corresponding 4-tert-butylphenyl-1,2,3-triazole 1f afforded the product 3i in 53% yield. Later, the reaction was performed using various haloaryltriazoles, such as 4-fluorophenyl 1f, 4-chlorophenyl 1g and 4-bromophenyl 1h, which also gave the corresponding products 3j, 3k and 3l in 67%, 52% and 54%, respectively.

Further, the heteroaryl derivative thienyltriazole 1i also reacted well to afford the product 3m in 75% yield. While the benzoyloxymethyltriazole 1j furnished the product 3n in excellent (82%) yield, the performance of another alkyltriazole 1k was less impressive giving the corresponding product 3o only in moderate (52%) yield. The reaction of model triazole 1a with 2-methyl-1,3-cyclopentanedione (2c) also led to the product 3p in moderate (55%) yield. Unfortunately, the reaction was not successful with dimedone (2d), 1,3-indanedione (2e) and acyclic 1,3-dicarbonyl compounds such as acetylacetone (2e) and ethyl acetoacetate (2f).

The structure and regiochemistry of all the products were confirmed by detailed analysis of their spectral data (IR, 1H, 13C and Mass) which were further unambiguously established by single crystal X-ray analysis of a representative compound 3e (Scheme 2 and Supporting Information File 3).

Based on the above control experiments, the following mechanism is proposed. Initially, the enol form of 1,3-dicarbonyl 2 attacks the sulfonyl group in 1 to form intermediate I which later undergoes proton transfer to form intermediate II. Cleavage of the N–S bond in intermediate II generates the β-O-tosylcycloalkenone 4 and triazolyl anion III. Subsequent counter-attack of the triazolyl anion III on the enone intermediate 4 (path A), followed by elimination of OTs affords the corresponding β-triazolylenone 3 (Scheme 4) [52]. The β-O-tosylcyclopentenone intermediate 4b can also undergo intramolecular tosyl migration to form a stable C-tosylated product 4b’ (see also Scheme 3b and c). This might also be attributed to the lower yields obtained in certain cases.

It may be noted that the outcome of the reaction is highly dependent on the nature of the 1,3-dicarbonyl compound. In the case of cyclic-1,3-dicarbonyls, cyclopentane-1,3-dione 2b reacts smoothly in almost all cases whereas the scope of cyclohexane-1,3-dione 2a is limited. On the contrary, dimedone (2d) did not react with N-tosyl-1,2,3-triazole, but reacted with N-mesyl-1,2,3-triazole to form the 5,5-dimethyl-3-oxo-cyclohex-1-en-1-yl methanesulfonate intermediate 4a. The highly substrate-dependent nature of the reaction can be explained by taking both hydrogen bonding and steric factors into consideration. In the solid as well as in the solution state, all the three above-mentioned 1,3-dicarbonyls exist in the enol form which are considerably stable and therefore undergo tosylation easily to form the corresponding O-tosylenone intermediates. The five membered tosyloxyenone intermediate is a planar molecule and therefore free of any major steric crowding (Figure 1). Hence, the incoming nucleophile can easily attack the β-position without any difficulty. On the other hand, the six membered o-tosyl intermediate is likely to exist in twist-boat conformation. When R = H, the pseudoaxial approach of the nucleophile towards the β-position leading to the enolate intermediate VI (R = H) bearing pseudoequatorially oriented OTs group or the pseudoequatorial approach of the nucleophile leading to the intermediate VII (R = H) bearing pseudoaxially oriented OTs group suffers from only limited steric crowding (1,3-diaxial interaction). In the case of dimedone 2d, the two bulky methyl groups impart greater steric hindrance (1,3-diaxial interaction) to the incoming nucleophile in the event of pseudoaxial approach leading to intermediate VI (R = Me) and to the axial OTs group in the resulting intermediate VII (R = Me) in the event of equatorial approach of the nucleophile. Therefore, the reaction proceeds in the case of 1,3-cyclohexanedione (2a), but stops at the tosyl/mesyl migration step and does not proceed further in the case of dimedone (2d). Unlike cyclic 1,3-dicarbonyls, the acyclic 1,3-dicarbonyls possess intramolecular hydrogen bonding and are in rapid equilibrium with their keto-form. In polar solvents, the stability of the enol form is further decreased and, therefore, the keto-enol equilibrium lies more towards the keto-form [53-56]. Presumably for this reason, the acyclic 1,3-dicarbonyls did not react in the desired way under our experimental conditions.

In conclusion, we have developed a metal-free and catalyst-free approach for the desulfonylative coupling of N-tosyl-1,2,3-triazoles with cyclic 1,3-diketones to form various β-triazolylenones. Although the scope of the 1,3-dicarbonyl compound is limited, the protocol is very convenient and useful as it employs very mild reaction conditions. It is also highly regioselective and `affords only N1-alkylated products in moderate to excellent yields.

ENSJ thanks CNPq, CAPES, Return Fellowship of the Alexander von Humboldt Foundation (AvH) and the Royal Society of Chemistry for the research fund grant (R19-9781). INNN thanks SERB, India for financial support. SP thanks CSIR, India for a senior research fellowship.

© 2021 Pati et al.; licensee Beilstein-Institut.
This is an Open Access article under the terms of the Creative Commons Attribution License (https://creativecommons.org/licenses/by/4.0). Please note that the reuse, redistribution and reproduction in particular requires that the author(s) and source are credited and that individual graphics may be subject to special legal provisions.
The license is subject to the Beilstein Journal of Organic Chemistry terms and conditions: (https://www.beilstein-journals.org/bjoc/terms) 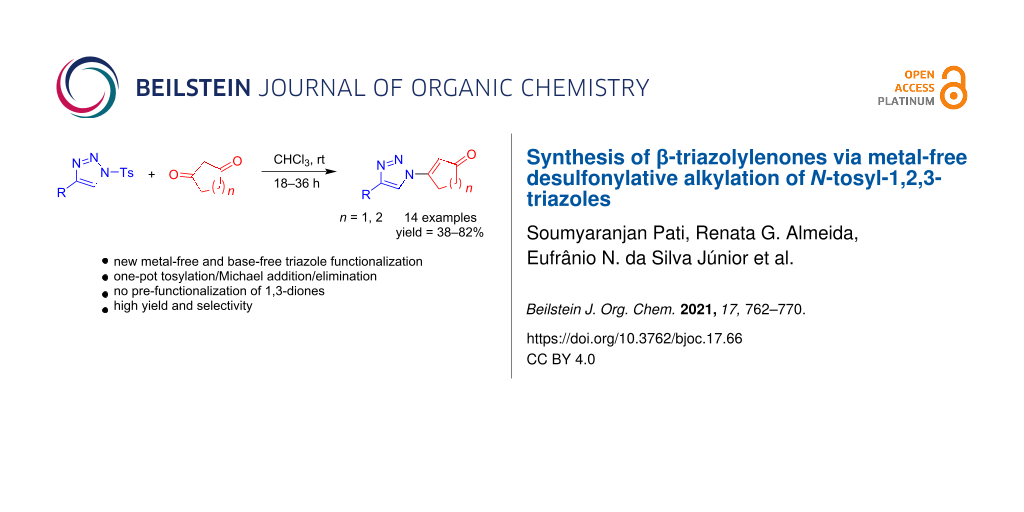