All articles from this author
Masato Kawakubo


All articles from this author
Masatoshi Kawahata

Phosphole-fused π-conjugated acenes have been attracting interest because of the attractive features of the phosphole moiety, such as fluorescence and chemically modifiable properties. Herein, 6-phenyl-6H-benzo[f]naphtho[2,3-b]phosphoindole was prepared by reacting dichlorophenylphosphine with a dilithium intermediate derived from 3,3′-dibromo-2,2′-binaphthyl. Various derivatives, such as a phospholium salt and a borane–phosphole complex with functional groups on the phosphorus atom were synthesized using the obtained phosphole as a common starting material. Single-crystal X-ray analysis of the parent benzo[f]naphtho[2,3-b]phosphoindole revealed that the pentacyclic ring is almost planar. Fluorescence spectroscopy data showed that the phosphole derivatives, such as phosphine oxide and the phospholium salt and borane complex exhibited photoluminescence in chloroform.

Phosphole-based heteroacenes are attracting increasing interest in various fields, such as organic synthesis, structural chemistry, and materials science [1-4]. The phosphorus atom of trivalent phosphorus compounds has a high chemical reactivity. Therefore, this phosphorus center can be easily chemically modified and converted to phosphole derivatives with different electronic properties by reactions such as oxidation, alkylation, and coordination to a Lewis acid [1-8].

Theoretically, pentacyclic benzonaphthophosphindole contains six structural isomers, in which the position of the fused benzene rings is different; of these, three are shown in Figure 1. The synthesis, crystal structure, and dynamic behavior of benzo[e]naphtho[2,1-b]phosphindole (A) with the C2 symmetry axis on the binaphthyl skeleton have been reported [9-11]. Synthetic approaches for phosphine oxide B [12-14], alkylated products C [15], and transition metal complexes D [16,17] have also been developed. However, for isomers E [18,19] and G [20], only the synthetic method for pentavalent phosphine oxides has been reported. To the best of our knowledge, the synthesis and derivatization of trivalent phosphole F and the optical properties have not been clarified. The systematic knowledge of the properties of a new family of fused phospholes is valuable for the design of new types of functional π-electron-containing materials. This paper presents the synthesis, molecular structure, and optical properties of 6-phenyl-6H-benzo[f]naphtho[2,3-b]phosphoindole (F) and the derivatives in which the phosphorus atom is chemically modified, such as a phospholium salt and the borane–phosphine complex.

Treatment of 3,3′-dibromo-2,2′-binaphthyl (1) [21] with n-butyllithium in dry THF at −78 °C and subsequently with dichlorophenylphosphine resulted in ring closure, affording the desired product containing 6-phenyl-6H-benzo[f]naphtho[2,3-b]phosphoindole (2) in 52% yield via the 3,3′-dilithio-2,2′-binaphthyl intermediate. The chemical modification of the phosphorus atom of 2 was carried out; the results are shown in Scheme 1. The reaction of 2 with hydrogen peroxide or elemental sulfur afforded the corresponding phosphine oxide 3 and sulfide 4 in 92% and 88% yield, respectively. Treatment of 2 with methyl triflate afforded phospholium triflate 5 in 81% yield. The reaction of 2 with borane in THF formed a borane complex 6 in 91% yield, and the reaction with chloro(dimethyl sulfide)gold afforded the gold complex 7 in 39% yield.

The molecular structures of the synthesized phospholes 2−7 were confirmed by spectral analyses (1H, 13C, and 31P NMR as well as MS and IR). All the corresponding aromatic proton and carbon atoms on the two naphthalene rings were equivalent in the 1H and 13C NMR spectra of phospholes. These results show that all phosphole derivatives had a symmetric structure in solution. The 31P NMR spectra of these show the typical low-field shift for P-modified phospholes 3–7 (δ = 22.5−39.3 ppm) relative to that of the parent compound 2 (δ = −13.27 ppm). These results suggest that the electron densities of the latter were reduced in comparison to that of 2. Single crystals of 2 suitable for X-ray analysis were obtained by repeated recrystallization. The molecular structure of 2, determined through single-crystal X-ray diffraction analysis, is illustrated in Figure 2, and selected geometrical parameters are shown in Table 1. The results revealed that the naphthalene and fused phosphole rings are almost coplanar (mean deviation = 0.030 Å). The angle between each naphthalene ring containing ten carbon atoms is 1.64°, which is smaller than that for group 15 analogs (i.e., N-phenyldibenzo[b,h]carbazole: 4.47° or 2.57° [22], for crystal data, see Figure S2, Supporting Information File 1 and Sb-phenyldinaphtho[2,3-b:2′,3′-d]stibole: 8.05° [23]). The sum of the bond angles around the phosphorus atom is 295.99°, and hence the phosphorus atom is sp3-hybridized and has a trigonal pyramidal geometry. X-ray analysis revealed that the packing structure of 2 had π–π-stacking, with a distance of approximately 3.427 Å between two benzonaphthophosphoindole planes (Figure 2b).

The photophysical properties of the synthesized phospholes were evaluated. The corresponding data are shown in Figure 3 and Table 2. Parent compound 2 shows the absorption maximum (λmax) at 362 nm, which is longer than that of 2,2′-binaphthyl (λmax = 300 nm) [24]. The introduction of a phosphorus atom to 2,2′-binaphthyl results in the formation of a bridge that fixes two naphthalene rings in a coplanar axis and forms a heterole-fused system. The λmax values of derivatives 3–7 are similar to each other and have a shorter absorption band than that of parent 2. Furthermore, it is known that λmax of [n]helicenes generally has a shorter wavelength than for the corresponding linear poly(acene)s [25]. The λmax of benzo[e]naphtho[2,1-b]phosphindole (A), 358 nm [16], is the same as that of parent 2. In contrast, the corresponding oxide B has a λmax wavelength that is approximately 50 nm longer than that of our oxide 3 [16]. The fluorescence wavelength, including the maximum emission (λem), and the quantum yield depend on the nature of the P-modification. Phosphine oxide 3, cation 5, and boron complex 6 emitted blue fluorescence in the visible-light region, with λem at 395–426 nm (Table 2). P-methylated cation 5 exhibited the longest wavelength and the highest quantum yield.

aMeasured in CHCl3. bExcited at 335 nm. cMeasured using anthracene as a standard.

The electrochemical properties of benzonaphthophosphoindoles were investigated by using cyclic voltammetry, and the electrochemical data are summarized in Table 3 and Figure S4, Supporting Information File 1. Parent compound 2 and borane complex 6 showed reversible reduction peaks (Ered = −1.25 and −1.26 V, respectively). Due to the increased electron–acceptor character of the phosphorus center, P-modification compounds 4 and 5 show a more positive oxidation potential than parent 2 [26]. Unfortunately, the electrochemistry of some compounds could not be determined under the conditions available to us.

Therefore, computational investigations are particularly useful for understanding the trends of the electrochemical and photophysical properties of molecular materials. Density functional theory (DFT) calculations [27] were performed at the B3LYP/LanL2DZ level of theory to gain additional understanding of the electronic structures. The HOMO and LUMO energies of the selected compounds are listed in Table 3. The DFT calculations showed that these compounds have HOMO–LUMO gaps of 3.60–3.96 eV. For parent compound 2 and derivatives 3, 5, and 6, the HOMO and LUMO correspond to the π and π* orbitals of the benzonaphthophosphoindole skeleton, respectively (Figure S5, Supporting Information File 1). In contrast, the corresponding π orbitals of phosphole sulfide 4 comprise HOMO−2 energy levels (Figure 4). The HOMO and HOMO−1 levels of oxide 3 are delocalized in the π orbitals of the benzonaphthophosphoindole skeleton, while HOMO−2 and HOMO−3 have a large contribution from the lone-pair and π orbitals. In sulfide 4, the sulfur analog of the oxide 3, the HOMO and HOMO−1 energy levels are delocalized in the lone-pair orbitals on the sulfur atom, resulting in considerable destabilization and significantly small HOMO–LUMO gap compared to those of other phospholes 2, 3, 5, and 6. This result is similar to the reduction potentials of compounds 2 and 6. According to time-dependent DFT calculations for 4, the S0 to S1 transitions are mainly dominated by the dipole-forbidden lone pair–π* HOMO–LUMO transitions. This phenomenon may be responsible for the nonfluorescence of 4. Both the π and π* energy levels in the all-functionalized phosphole derivatives 3–6 are lower than those of parent phosphole 2, owing to the increased electron deficiency of the phosphorus center in the former. In particular, the energy levels in cationic phospholium 5 are significantly stabilized because of the cationic nature of the phosphorus center. These results are consistent with the 31P NMR observations discussed above.

In summary, a novel pentacyclic phosphole, 6-phenyl-6H-benzo[f]naphtho[2,3-b]phosphoindole, was prepared by performing the ring-closure reaction of 3,3′-dilithio-2,2′-binaphthyl with dichlorophenylphosphine. The obtained product was used as a key compound for the chemical modification of the phosphorus atom. X-ray crystal analysis showed that the parent trivalent phosphole has a considerably planar benzonaphthophosphoindole skeleton in its crystal structure. 1H and 13C NMR observations revealed that all the phospholes obtained in this study had a highly symmetric structure in solution. Fluorescence spectroscopy data showed that the phosphole derivatives, such as a phosphine oxide, phospholium salt, and borane complex, exhibited photoluminescence in chloroform. The π and π* levels in all-functionalized phosphole derivatives are lower than those of the parent phosphole, owing to the increased electron deficiency of the phosphorus center in the former. This electronic nature is supported by the low-field shift of the P-modified derivatives relative to parent phosphole 2 in 31P NMR. Further investigation of the design, synthesis, and theoretical and spectroscopic studies of new functional π-electron materials for organic electronics applications is under progress, and the results will be reported in due time.

© 2021 Matsumura et al.; licensee Beilstein-Institut.
This is an Open Access article under the terms of the Creative Commons Attribution License (https://creativecommons.org/licenses/by/4.0). Please note that the reuse, redistribution and reproduction in particular requires that the author(s) and source are credited and that individual graphics may be subject to special legal provisions.
The license is subject to the Beilstein Journal of Organic Chemistry terms and conditions: (https://www.beilstein-journals.org/bjoc/terms) 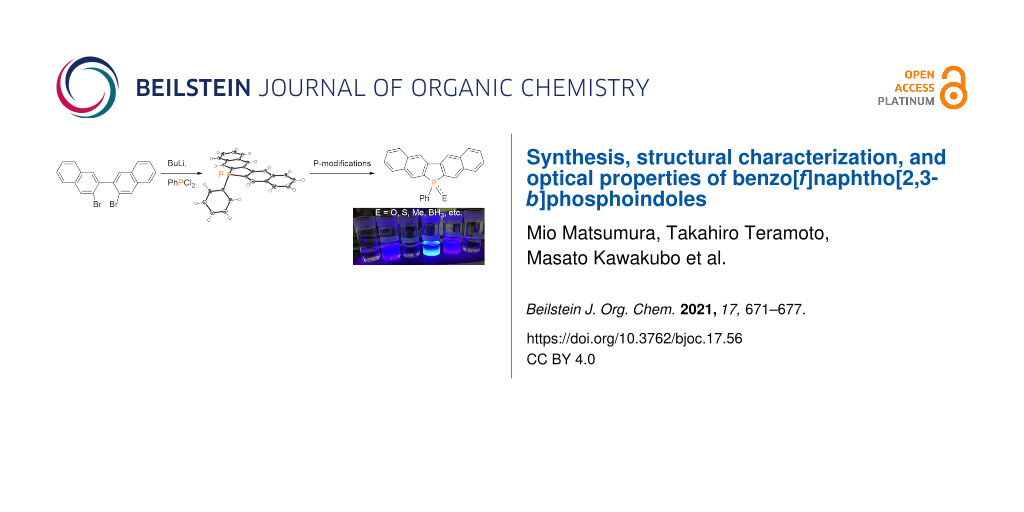