All articles from this author
Greta Račkauskienė


All articles from this author
Gita Matulevičiūtė


All articles from this author
Vytas Martynaitis


All articles from this author
Frank A. Sløk

1,2-Oxazoles (isoxazoles) constitute an important class of heterocyclic compounds that plays a fundamental role in drug discovery [1-7]. Many amino-functionalized 1,2-oxazole derivatives are biologically active substances that include naturally occurring and synthetic neuroactive compounds. Specifically, natural products such as muscimol (I) and ibotenic acid (II) (Figure 1) have been isolated from several fungal species and are active on the γ-aminobutyric acid (GABA) and glutamate receptors of the central nervous system (CNS), respectively [8,9]. Various unnatural amino acids bearing a 1,2-oxazole moiety, such as nonproteinogenic α-amino acids, have been used as excitatory amino acid receptor agonists [10-13]. For example, (S)-AMPA (III) and (S)-ACPA (IV) are specific agonists of an AMPA receptor that mimic the effects of the neurotransmitter glutamate [14-16].

Unnatural heteroarene amino acids have also been widely used as building blocks to prepare various heterocyclic peptides [17-22]. In particular, 1,2-oxazole amino acid derivatives, such as compounds V [20], VI [21], and VII, VIII [22], can be easily synthesized and are suitable for insertion with the corresponding heterocycle into a peptide-like structure.

In recent decades, various methods of constructing 1,2-oxazole ring systems have been developed [1-7,32]. The two primary pathways to 1,2-oxazoles are: the 1,3-dipolar cycloaddition of alkenes and alkynes with nitrile oxides, and the reaction of a three-carbon atom component, such as a α,β-unsaturated ketone or a 1,3-diketone with hydroxylamine hydrochloride [33]. Recently, Rosa et al. reported a useful procedure for the synthesis of various regioisomeric 1,2-oxazole derivatives. Accordingly, the synthetic route starts from the condensation of 1,3-diketones with N,N-dimethylformamide dimethylacetal to form β-enamino ketoester. The latter undergoes a subsequent cycloaddition reaction with hydroxylamine to form regioisomerically substituted 1,2-oxazoles [34,35].

This study aimed to develop and synthesize methyl 5-(cycloaminyl)-1,2-oxazole-4-carboxylates, as new amino acid-like building blocks. This type of functionalized heterocycles could exhibit not only useful biological properties, but also find application as building blocks for the generation of DNA-encoded chemical libraries.

The synthetic strategy for the synthesis of novel functionalized 1,2-oxazole derivatives is outlined in Scheme 1. The synthetic sequence began with preparing β-keto esters 2a–h by treating N-Boc-protected cyclic amino acids 1a–h with Meldrum’s acid in the presence of EDC·HCl and DMAP, followed by methanolysis of the corresponding adducts [27,28,31,36-38]. Reaction of the resulting β-keto esters 2a–h with N,N-dimethylformamide dimethylacetal afforded cycloaminyl β-enamino ketoesters 3a–h. After isolation of compounds 3a–h from the corresponding reaction mixtures, they were identified using LC–MS analysis, and were immediately treated with hydroxylamine hydrochloride in an appropriate solvent to obtain the target 1,2-oxazoles 4a–h. A representative β-enamino ketoester 3a was subjected to a detailed NMR analysis (Figure 2a). The 1H NMR spectrum of compound 3a showed the appearance of a new downfield enamine proton signal which resonated at δ 7.80 ppm. The connectivity of the β-enamino ketoester moiety and the N-Boc-protected azetidine fragment were easily confirmed based on long-range 1H,13C correlations, obtained from gs-HMBC spectra. The aforementioned enamine proton and protons 2’(4’)-H (δ 4.00-4.09 ppm) from the azetidine ring system shared the HMBC cross-peak with the ketone carbonyl carbon (δ 195.4 ppm). Finally, in the 1H,15N-HMBC spectrum of 3a, an expected long-range correlation between the enamine proton (δ 7.80 ppm) and the dimethylamino nitrogen (δ −269.7 ppm) was observed, thus allowing to prove the formation of β-enamino ketoester.

Analysis of the possible resulting reaction showed that the condensation reaction between β-enamino ketoester precursors 3a–h and hydroxylamine could lead to the formation of two isomeric 1,2-oxazoles (Scheme 2) [34,35]. In the first route, enaminone 3a–h and hydroxylamine gives intermediate A, which then removes one molecule of dimethylamine to form intermediate B. This is followed by intramolecular cyclization to intermediate C, and subsequent dehydration to generate the final products 4a–h. Alternatively, nucleophilic attack of hydroxylamine to the carbonyl carbon atom of the enone moiety forms intermediate D. The dehydration of the latter provides oxime E, which through the formation of intermediate F, should be capable to form final product VII. However, as demonstrated with substrate 3a, the reaction only gave product 4a with a yield of 65% (Scheme 1). LC–MS analysis and flash column chromatography did not allow to detect the formation of the second possible isomeric product methyl 3-(N-Boc-azetidin-3-yl)-1,2-oxazole-4-carboxylate (VII) (Figure 1) [22].

Furthermore, 15N-labeled methyl 5-(N-Boc-azetidin-3-yl)-1,2-oxazole-4-carboxylate (5) was synthesized by analogy to 4a, by the reaction of β-enamino ketoester 3a with 15N-hydroxylamine hydrochloride (Scheme 3). Incorporation of a 15N atom in azaheterocycles is an important method for studying molecular structures, which significantly expands the possibilities of using NMR methods [40]. The 15N-labeled aromatic heterocyclic structures usually have well-resolved 1H,15N (JHN) and 13C,15N (JCN) coupling constants, as well as additional splitting of the corresponding signals in the standard proton decoupled 1D 13C NMR and 1D 1H NMR spectra [41,42]. The 1H,15N coupling constants in the azoles, especially the rather large 2JHN values, which are in the range of 13–15 Hz is widely accepted in the structure assignments and are even considered as diagnostic for this class of compounds, because the 3JHN is typically in the range of 1–3 Hz. For example, the 1H,15N coupling constants were measured for a series of 1,2-oxazoles, which provided the 2JHN values in the range of 14.4–14.7 Hz, while the 3JHN values were in the range of 1–3 Hz [42,43]. The coupling constants 13C,15N of a series of 15N-labeled pyrazoles gave 1JCN values of 8–11 Hz, while 2JCN were less than 2 Hz [44]. The 15N-labeled 1,2-thiazole moiety was readily determined by measuring the corresponding direct 13C,15N coupling constant 1JC3-N2 of 6.9 Hz [44].

The structure of the newly synthesized chiral 1,2-oxazole derivatives 4b–g was described and confirmed via NMR spectroscopy data (Supporting Information File 1 in Figures S21–S38). In 1H NMR and 13C NMR spectra of compounds 4b and 4c, double sets of signals with different intensities were observed. It is possible that these signals are associated with the presence of equilibrating conformers arising from the rotation of the tert-butoxycarbonyl (Boc) moiety around a C–N single bond (Figure 4a). It is known that some N-Boc-substituted heterocyclic compounds, including oxazolidines, consist of NMR spectra showing two sets of signals due to the dynamic equilibrium between the two conformers formed by the rotation of the Boc moiety, and their syn- and anti-orientation is present in the molecule [45,46].

The synthesis of methyl 5-(N-Boc-piperidin-4-yl)-1,2-oxazole-4-carboxylate (4h), a nonchiral amino acid-like building block, was obtained by the reaction of β-enamino ketoester 3h with hydroxylamine hydrochloride (Scheme 1). The 1H NMR spectrum of compound 4h showed a characteristic resonance for the Boc-group methyl protons, a singlet at δ 1.47 ppm, while the 1,2-oxazole methine proton appeared as a singlet at δ 8.46 ppm. The 13C NMR spectrum of 4h contained the characteristic signals of the 1,2-oxazole ring skeleton carbons at δ 108.3 (C-4), 150.2 (C-3), and 179.5 (C-5) ppm. The 15N NMR spectrum of 4h exhibited characteristic resonances of nitrogen atoms at δ −294.6 (piperidine) and δ −3.1 (1,2-oxazole) ppm, respectively.

Next, we studied the reaction of compounds 4b and 4g with trifluoroacetic acid. Removal of the Boc protection in the presence of CF3COOH in dichloromethane yielded trifluoroacetates 6a and 6b as white solids (Scheme 4). A single crystal of 6b was prepared via recrystallization from dichloromethane for X-ray diffraction analysis [48].

The asymmetric unit of the crystal of 6b consists of two (2S)-2-[4-(methoxycarbonyl)-1,2-oxazol-5-yl]piperidin-1-ium cations and two 2,2,2-trifluoroacetate anions (2C10H15N2O3+·2C2F3O2−) (Figure 5; Table 1, Supporting Information File 1 in Tables S1–S3). The substituted piperidinium moieties are in chair conformation. The 1,2-oxazole rings occupy equatorial positions at the 2nd atom of the piperidinium ring, and the dihedral angle H(10)–C(10)–C(5)–O(1) is 158°. The methoxycarbonyl group is in the same plane as the 1,2-oxazole ring.

In the NMR spectra of chiral 1,2-oxazoles, two sets of signals with different intensities were observed due to the existence of two Boc-group rotational conformers. The X-ray structure of (2S)-2-[4-(methoxycarbonyl)-1,2-oxazol-5-yl]piperidin-1-ium trifluoroacetate (6b) finally supported this structure analysis.

The authors are grateful to Mr. S. Belyakov (Latvian Institute of Organic Synthesis, Riga, Latvia) for performing the X-ray analysis.

This work has been accomplished with financial support provided by Vipergen ApS company (Copenhagen, Denmark).

© 2022 Bruzgulienė et al.; licensee Beilstein-Institut.
This is an open access article licensed under the terms of the Beilstein-Institut Open Access License Agreement (https://www.beilstein-journals.org/bjoc/terms), which is identical to the Creative Commons Attribution 4.0 International License (https://creativecommons.org/licenses/by/4.0). The reuse of material under this license requires that the author(s), source and license are credited. Third-party material in this article could be subject to other licenses (typically indicated in the credit line), and in this case, users are required to obtain permission from the license holder to reuse the material. 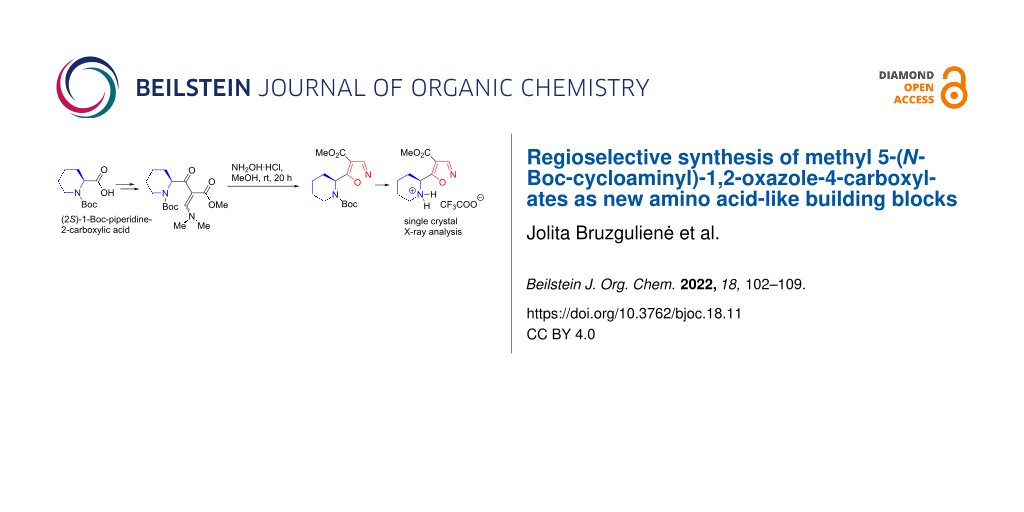